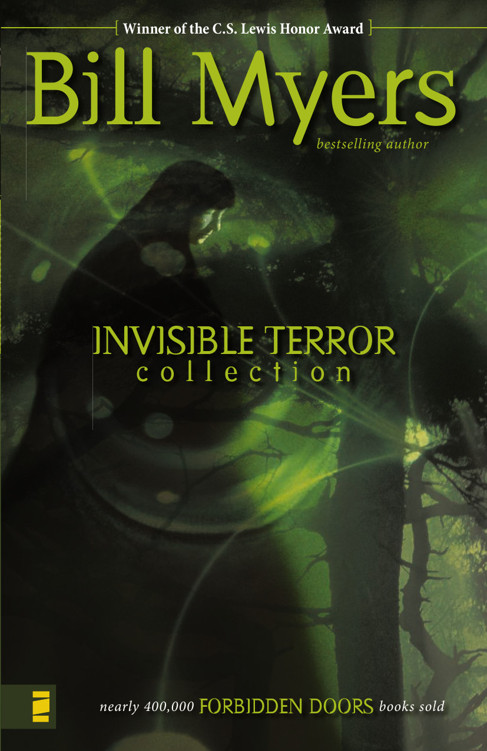 Therefore put on the full armor of God, so that when the day
of evil comes, you may be able to stand your ground, and after
you have done everything, to stand. Stand firm then, with the
belt of truth buckled around your waist, with the breastplate
of righ teous ness in place, and with your feet fitted with the
readiness that comes from the gospel of peace. In addition
to all this, take up the shield of faith, with which you can
extinguish all the flaming arrows of the evil one. Take the
helmet of salvation and the sword of the Spirit, which is the
word of God.

The cloaked figure stood outside the house. Slowly, reluctantly, she started to climb the porch stairs. At the top she reached for the doorbell, then hesitated.

Suddenly she convulsed, doubling over as though someone had punched her in the gut. She leaned against the wall, gasping. Carefully, almost defiantly, she rose. She was a handsome woman, in her late fifties. Strands of salt-and-pepper hair poked out from under her hood. There was a distinct air of sophistica-tion about her, though her face was filled with pain … and fear.

She rose again. More slowly, less steadily. This time she would obey.

She stretched her thin, trembling hand toward the doorbell and pressed it. There was no response. She tried again. Nothing.

The doorbell didn’t work. Not surprising in this neighborhood.

She opened the screen door, which groaned in protest, then rapped on the door.

Rebecca was the first to hear it. She stirred slightly in bed, thinking it was still part of a dream.

She threw off her covers, then staggered out of bed and into the hallway. Scotty’s door was shut. No surprise there. He was the world’s soundest sleeper (that’s the beauty of not having a care in the world). She glanced toward Mom’s room, then remembered. Her mother was off at a funeral of some third aunt twice removed.

“I’ll only be gone three days,” she’d assured them. “I’ve asked that nice Susan Murdock from church to check in on you. You think you’ll be okay for three days?”

Seventeen-year-old Becka and her fifteen-year-old brother figured they’d be okay for three weeks, let alone three days. They tried their best to convince Mom that they didn’t need some semistranger from church checking up on them. Of course, it hadn’t worked.

Becka reached the stairs and started down, hanging on to the banister for support. The cast had only been off her leg a few days, and she was still a little shaky. Then there was Muttly, her pup. His bouncing and leaping around her feet didn’t help.

Becka reached the bottom of the stairs and crossed to the front door. She snapped on the porch light and looked through the peephole. An older, frail woman stood there. Becka hesitated. The visitor certainly looked harmless enough. And there was something very sad and frightened in her eyes.

Becka unbolted the door and opened it. It stuck slightly, and she had to give it an extra yank. But even then she only opened it a crack.

“I am sorry to bother you at this time of evening, but there is someone …” She trailed off, pulling her cloak tighter as if fighting off a chill. “There is someone who needs your help.” Becka fidgeted, eyeing the woman carefully.

“Please,” the woman insisted. “If I may come in for just a moment? It is most urgent.”

Becka’s mind raced. The woman hardly looked like a robber or a mugger. If worse came to worst, Becka could always scream and bring Scotty running downstairs. Besides, she couldn’t shake the image of those eyes: tired, sad, frightened. It was against her better judgment, but —

Becka opened the door. The woman nodded a grateful thank-you and stepped into the entry hall. “You won’t regret this, I assure you. My name is — ” She broke off at the sound of a harsh little growl.

Becka looked down. Muttly had his hackles up and was doing his best imitation of being ferocious. “Muttly!” she scolded.

The puppy growled again until Becka reached down and gave him a little thwack on the nose. He looked up at her and whined feebly.

“I’m sorry,” Becka said as she turned back to the woman.

“That’s not like him at all. He’s usually so friendly.”

“It does not surprise me,” the woman answered, keeping a wary eye on the animal. “I am afraid he senses it too.”

“Senses it?” Becka asked. Normally she would have invited the stranger to have a seat, but at 1:30 in the morning the woman had a little more explaining to do. “What exactly does my dog sense?”

The woman pulled back her hood and shook out her hair.

It fell past her shoulders, long and beautiful. She extended her hand. “My name is Priscilla Bantini. We have not met officially, but we have many friends in common. I am the owner of the Ascension Bookshop.”

Becka sucked in her breath. The Ascension Lady! The woman who owned the New Age bookstore, who made the charms for her friends … who sponsored the kids in the Society. Becka swallowed hard. She wasn’t sure how to respond.

The woman watched her carefully. “I know what you must think; however, I assure you I had nothing to do with the pranks the children have been playing on you.”

Pranks!
Becka thought.
I almost get hit by a train, and then
I’m kidnapped by satanists. Some pranks!

The woman continued. “Someone desperately needs our help. They have been calling upon me, begging for my assistance, but I have neither the strength nor the power.”

“I’m sorry …” Becka shook her head. “What are you talking about?”

“You have the strength and the power they need.” Becka blinked. “What?”

The woman spoke calmly and evenly. “As a Chris tian, as a disciple of Christ, you have both the strength and the power to help this … person.”

Becka closed her eyes a moment. She’d heard the Ascension Lady was weird — but she didn’t know she was a total fruitcake.

“You’re going to have to run that past me again,” she said.

“There is a spirit — the soul of a deceased human — that is trapped in a mansion across town. It desperately wants to be free, to reach its resting place, but it cannot do so on its own. It needs your help.”

“I know you disapprove of the source of my power, but this poor creature needs to be set free. Together you and I can — ”

“What creature are you talking about?”

“The one inhabiting the Hawthorne mansion across town.

It is the spirit of a human, a victim of a tragic murder, that is trapped there by negative energy. It desperately wants to be free.” The woman’s voice grew more urgent, her eyes more pleading.

“The anniversary of its death will be here in just three days, and it is begging me, pleading with me to seek your help.” Becka shook her head. “I still don’t understand. How am I supposed to be able to help?”

“According to my charts, the anniversary of the murder is in conjunction with a unique alignment of planets. This Friday, April twenty-one, is when the spirit can make its escape. This is when we can join forces — bringing it forth in a séance and helping it reach its eternal resting — ” Suddenly a voice boomed,
“What are you doing here?”
Becka and the woman spun around to see Scott, Becka’s younger brother, towering above them on the stairway. Although he was only a ninth grader, his height and position above them gave him a commanding presence.

Priscilla cleared her throat. “You must be Scott Williams.

“I know exactly who you are.” He started down the steps toward her.

Priscilla forced a smile. “Yes, well, I was just telling your sister that — ”

“No one invited you here.”

Becka looked on, shocked at her brother’s manners. “Scott.” He continued down the stairs toward the woman, and there was no missing his anger. “Haven’t you caused us enough trouble?” Priscilla backed half a step toward the door. “I am not here to cause trouble. I am here to help. According to my astrological charts — ”

“I don’t give a rip about your astrological charts.” He reached the bottom of the steps, but he didn’t stop. He walked directly, purposefully, toward her.

He turned toward Becka. “This woman brings in that channeler creep, nearly gets you killed, helps those cruds who snatched you, and you expect me to be polite?” Before Becka could answer, Scott turned back to Priscilla. “Get out of here.” The Ascension Lady reached behind her, fumbling for the door handle.

The woman pulled the door open and backed outside. “I apologize for the intrusion. I was expecting more Chris tian love, but I can certainly understand.” She stumbled over the thresh-old as she backed out onto the porch.

Scott continued toward her. “Get off our property before I throw you off.”

“I did not come for myself.”

Scott reached for the door.

“As I told Becka, the spirit of a deceased human desperately needs our — ”

He slammed the door shut.

Becka stood in the silence, staring at her little brother. She was both shocked and a bit in awe. Then, for the first time, she noticed he was trembling.

He turned to her. “They won’t hurt you again,” he said, his voice quivering. “I promise you, sis. I won’t let them hurt you again.”

An hour later Scott lay in his bed, staring at the ceiling. No way would he be able to get back to sleep. Not after tonight. He was too steamed. How
dare
the Ascension Lady show up at their door. How dare she ask for a favor. After all her people had done to them? No way!

give me a break!

Normally Scott was pretty much a happy-go-lucky guy. “Live and let live,” “Be everybody’s bud” — those were his mottoes.

And if things ever got too tense, there were always his wisecracks.

But there were no jokes tonight. And for good reason.

He turned on his side, his thoughts still broiling. They had moved to this town three months ago, after Dad had died. And for three months, he and Mom and Becka had been constantly hassled by the Society and all their hocus-pocus.

Why? Why did those creeps have to keep bothering them?

Weren’t he and Mom and Becka the good guys? Why were they always the ones put on the defensive?

To get even …
His eyes lit up with interest. Now there was an idea.

But even as he thought it, a still, small voice whispered that he might be stepping out-of-bounds — that getting even wasn’t exactly the right plan of attack.

Scott ignored the voice. Enough was enough, and he and Becka had had enough. Again the thought of evening the score tugged at him. He toyed with contacting Z, his mysterious friend in the computer chat room. Maybe Z would know of some weakness in the Society that Scotty could use against them. But he already knew what Z’s response would be. He’d heard it before.

He’d even used it before: “These people are not your enemy; they’re only prisoners of your enemy.”

Yeah, right. Well, prisoners or not, Scott was going to find a way to protect his sister. And it being the middle of Spring Break, he’d have plenty of time to think of something.

Becka turned from the front seat of the car to her friends. “You sure this is the right house?”

“Oh yeah.” Julie, one of her best pals — a super jock with perfect clothes and a figure to match — grinned at her. “Everyone in town knows this place, right, guys?”

The others agreed: Ryan, the driver with the killer smile; Krissi, the airhead beauty; and Krissi’s part-time boyfriend and full-time intellectual, Philip.