Read Is It Just Me?: Or is it Nuts Out There? Online

Is It Just Me?: Or is it Nuts Out There?

BOOK: Is It Just Me?: Or is it Nuts Out There?
3.08Mb size Format: txt, pdf, ePub
Read Book Download Book
ads 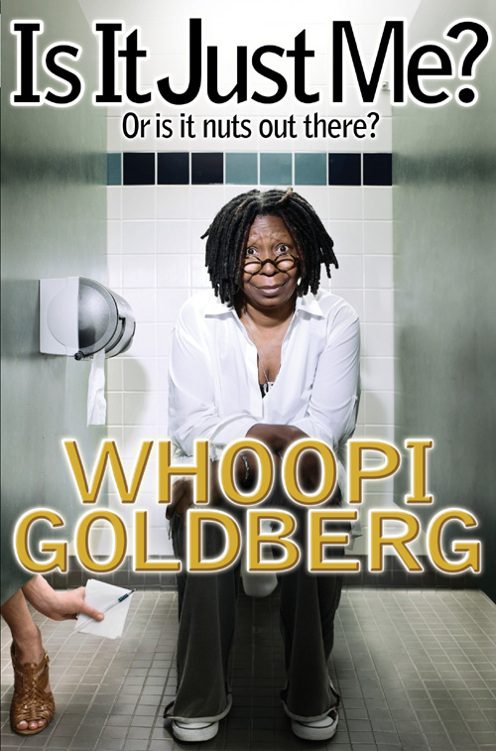 IS IT JUST ME?

Or is it nuts out there?

the two most civil folks in my life.

as you would have done unto you.

Chapter 1 - Abuse It and Lose It

Chapter 5 - If You Can’t Be Witty, Don’t Be Shitty

Chapter 6 - Then Maybe You Should Stop Complaining

Chapter 12 - If You Don’t Want to Hear the Answer, Don’t Ask the Question

Chapter 13 - A Civil Person’s Handy List: Things to Tell People Who Put You on the Spot

Chapter 16 - Where Is the Respect?

Chapter 17 - You Respect My Opinion, I’ll Respect Yours

Chapter 18 - A Civil Person’s Handy List: How Not to Turn a Discussion into a Fight

Chapter 20 - TSA Does Not Mean “Time to Smart Ass”

Chapter 21 - A Civil Person’s Handy List: How Not to Slow Down a TSA Screening

Chapter 26 - A Civil Person’s Handy List: Stinky Foods Not to Bring on a Plane

Chapter 28 - A Civil Person’s Handy List: What to Bring for a Kid on a Plane

Chapter 29 - Louder, They Can’t Hear You in the Lobby

Chapter 30 - A Civil Person’s Handy List: Places Not to Use a Cell Phone

Chapter 31 - Thank You for Not Texting

Chapter 33 - A Flea on the Ass of a Mosquito

Chapter 41 - Encourage Your Kids to Play by Themselves

Chapter 43 - Role Models Will Disappoint You

Chapter 44 - A Civil Person’s Handy List: Role Models Who Have Disappointed Us

Chapter 47 - You Realize I Can See You

Chapter 49 - Should We Be Worried About This?

Chapter 53 - You Realize I Can Hear You

Chapter 54 - The Smarter Things to Say

Chapter 57 - A Civil Person’s Handy List: Things to Think and Not Say

Chapter 58 - Buddy Is the New Nigger

Chapter 59 - Just Because I’m a Catholic, Don’t Assume That a Priest Has Touched Me

Chapter 61 - Take Your Stinking Paws Off Me, You Damned Dirty Ape!

Chapter 63 - A Civil Person’s Handy List: Behavior to Avoid in the Workplace

Chapter 66 - Who Rules When It’s Not Your House?

Chapter 73 - With All Due Respect

First of all, thanks for picking up this book. I’m sure the cover got your attention too. That was the point. Now that you’ve done so, you may be wondering, “What the hell?”—which is one of the names I had for this. Some of the others were
Uncivil Liberties
(which no one got), or
If You’re in Confession, You Can’t Have an Autograph,
which everyone said sounded like a prissy book by a celebrity. And then
Is It Just Me?
came into being because it really does say it all.

As it turns out, it isn’t just me. When I asked different people what was bugging them, it turned out that it was the same stuff bugging me!—and I knew what I wanted to write.

Somehow so many little pieces of courtesy have gone by the wayside. People in your face, in your business, not caring if they are invading your space, being disrespectfully loud.

Thoughtlessness is the new manners, and I’ve got to say I don’t like it. Now, I’m guilty of some of those things, but I’m aware of it, so I try not to share my cell phone conversations with everyone. I try to remember to say “please” and “thank you”—all the things my mom taught me to do . . . that I don’t do anymore. But if I’m slacking on it, and if you’re slacking on it, and everyone else is slacking on it, well, you can see just how we may have gotten ourselves to the point of “I’m Annoyed/You’re Annoyed.”

So over the last year there were days when I remembered to write things down that struck me. Many are written here. They cover the map of my mind, unleashed on you the way they appear in my head. Little things, the way I can comment on them in a book but not on TV.

In no particular order—oh, and I don’t necessarily have any answers guaranteed to work for anyone. I can just hear you saying, “Jeez, Whoop, your head’s up your butt,” or “Hey, Whoop, that’s interesting.” But either way, you might as well get this book ’cause that guy over there just sneezed and didn’t cover his mouth, and the look on your face says, “No, Whoop, it’s not just you.”

Chapter 1
Abuse It and Lose It

People do a lot of crazy things, but when I think about all of the things they should not be doing, the craziest thing on my mind is people drinking and driving.

How long have we been trying to stop drunk driving? Oh, only for as long as I can remember. Think of all those films they made us watch back in driver’s ed. And then there’s all the public service announcements on TV. I always wondered why they play them late at night, though, while the drinkers are still in the bars getting tanked. Oh well. But when it comes to drunk driving, you can’t say there isn’t awareness. What’s missing is effectiveness.

Maybe the ads aren’t graphic or scary enough. At least not enough to reach the people who get hammered and drive. Now, for smoking, it’s different. I see thousands of TV commercials showing people stuck in bed because they smoke cigarettes and they’re dying of cancer. They make these heart-wrenching pleas, “Don’t be like me . . . Don’t smoke.” It’s impossible to watch them and not feel the impact emotionally. Unless I’m missing something, I don’t see any PSAs as powerful about drinking and driving. I don’t see anybody doing any commercials with the cars burned up and turned to charcoal . . . blood spatters all over the ground . . . some celebrity announcer getting all whispery, saying, had this driver not had that final drink then he or she would still be alive.

But the more I think about it, the sad truth is, maybe no public service announcement—no matter how strong or scary—is going to be enough. After all, disturbing as they are, I’ve seen plenty of those stop smoking spots, and I still light up.

I think we need to do more.

This subject has always been in my consciousness for one reason. It’s basic. I believe that people have to be responsible for what they do. There’s a concept, huh? Personal responsibility. Good lord, Whoopi’s gone crazy, talking like that!

It’s true, though. Actions should have consequences. But the consequences also have to match the responsibility. So, all right, then. If I smoke, I know there’s a possibility that I could croak from it. I also know there’s a possibility I could croak just because I stepped on the sidewalk. But what I don’t like is that I can drink and drive and get caught—and then get my car back!! That’s not a consequence. If I drink and drive, if I get pulled over and flunk the test, my car should be taken. Period. That’s a consequence. You shouldn’t get two, or three, or four, five, six chances.

Now, remember the woman who was that wrong-way driver on the Taconic Parkway in New York? Yeah, who could forget. Well, there’s still a lot of talk about her because her husband says he didn’t know her to be a drug user or an alcohol abuser. Folks in her neighborhood were kind of saying the same thing. And yet her stomach contents told a totally different story. If the lab tests were correct, though, you have to wonder, was this a one-time thing? We will never really know. But we do know this: For a lot of drunk drivers, it doesn’t happen just once. Not even close. But, hold on, if so many people get caught drinking and driving, and then go out and do it again and again and again, it begs the question: Why is it?

I’ll tell you why.

Because there’s no consequence.

Oh, sure there are penalties, but not enough to be a deterrent. Not from what I’ve seen. Not happening. The evidence is that the behavior continues. How many times do we see that drunk drivers like the guy who allegedly killed Nick Adenhart, the Angels baseball player,
are repeat offenders
? Hey, why did that dude still have a car? He should
not
have been able to have a car. No debate. You don’t want people to drink and drive? When they do it—take the car! And then they have to prove that they’re clean and able to be a responsible human being behind the wheel.

I tell you, if I had my own world? If you drank and drove, and got caught, you would not have a car. Your new best friend would be the bus, Jack. Someone would have to come and get you from the police station. And you would not be able to get your car back until I knew that you had gone through a program and had a certificate that said you have been clean and sober for seventy-five days.

And while I’m good and hot about this, let me unload on the texters. If you get caught texting, your car should disappear for a month. Because, you know what? It’s too dangerous to text and drive, same as drinking. You get caught . . . bye-bye, car. You’re not a responsible enough person.

Some people might say that is too extreme. Come on. If you’re not going to be responsible, someone has to step in like when you were a kid. The minute you’re doing something that is affecting the public roadways or other places where you can do harm to others, I don’t care if the government steps in and takes your car. You shouldn’t have been drinking and driving.

And if a public service message won’t get your attention, maybe that will.

BOOK: Is It Just Me?: Or is it Nuts Out There?
3.08Mb size Format: txt, pdf, ePub
Read Book Download Book
ads

The Real Doctor Will See You Shortly by Matt McCarthy
Something Only We Know by Kate Long
Married Again to the Millionaire by Margaret Mayo
The Cedar Face: DI Jewell book 3 (DI Elizabeth Jewell) by Carole Pitt
Camp Confidential 06 - RSVP by Melissa J Morgan
Side Effects May Vary by Murphy, Julie
Let Me Die in His Footsteps by Lori Roy
Plainclothes Naked by Jerry Stahl
Entice (The Fighter Romance Series - Book #2) by Taylor, Alycia
The Mascot by Mark Kurzem