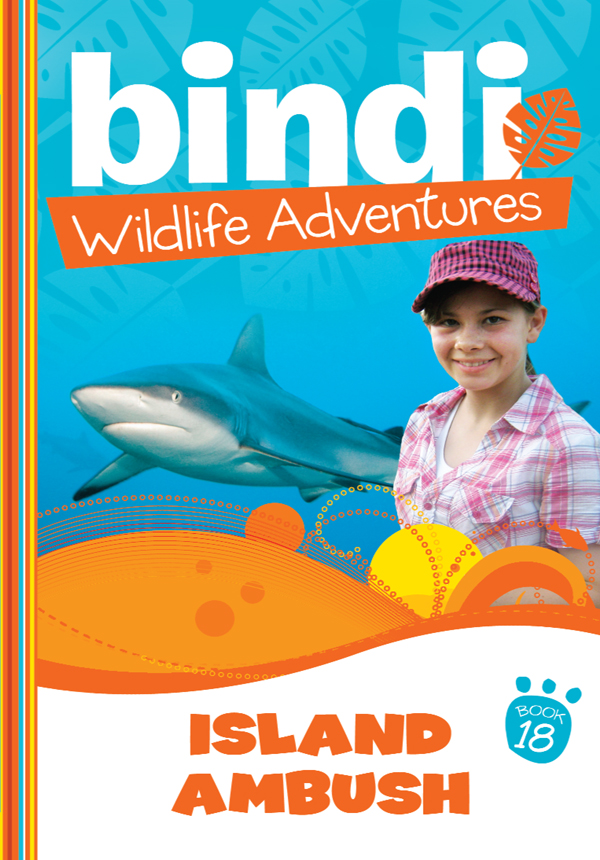 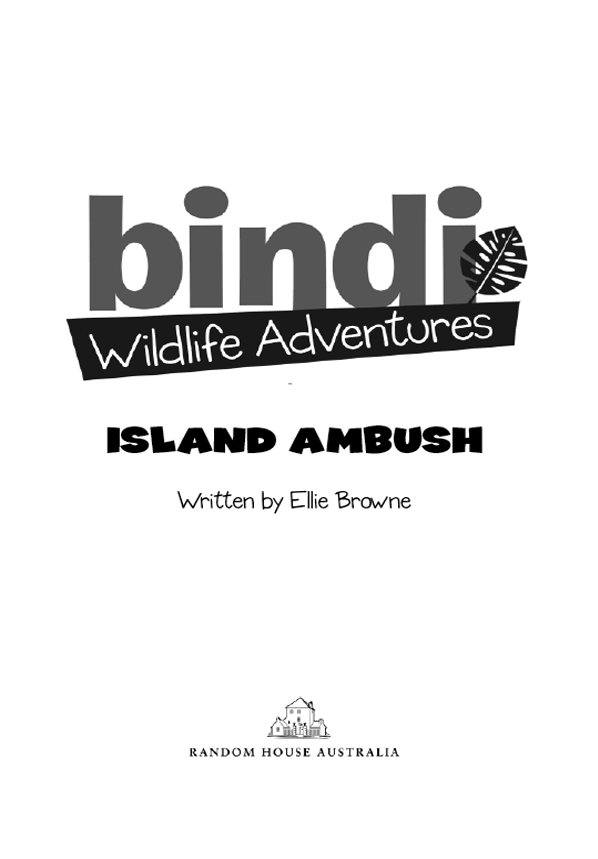 All rights reserved. No part of this book may be reproduced or transmitted by any person or entity, including internet search engines or retailers, in any form or by any means, electronic or mechanical, including photocopying (except under the statutory exceptions provisions of the Australian
Copyright
Act 1968
), recording, scanning or by any information storage and retrieval system without the prior written permission of Random House Australia. 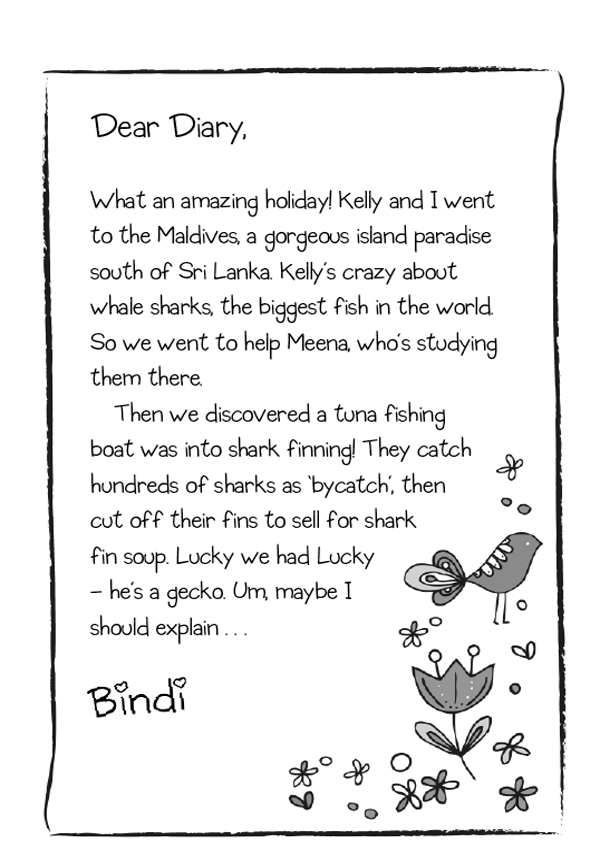 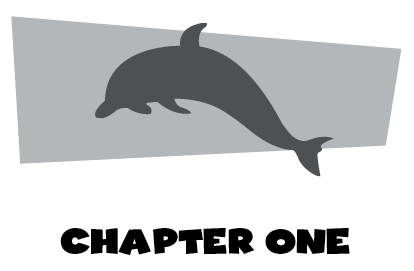 Bindi looked up. Sleek and majestic, Big Mouth cruised above them, blocking out the sun.

Bindi wanted to shout in amazement but she was 10 metres underwater. Instead, she turned to her friend Kelly and gave her the thumbs up.

When the great whale shark had passed over and the sun was again visible through the crystal clear water, the girls followed at a respectful distance.

Finally, Big Mouth dived down and disappeared out of sight.

Bindi motioned to Kelly, and they swam across to the reef overhang. Here it looked just like an octopus's garden, a wonderland of different corals alive with myriad fish in a rainbow of colours. It was spectacular, and the perfect setting to see the world's largest fish.

Kelly had the idea to come to see the whale sharks here at South Ari Atoll in the Maldives, a tropical island paradise of beautiful coral reefs and atolls in the oceans south of Sri Lanka. Kelly, who lived in Oregon in the USA, was totally mad about these enormous but harmless fish, which mainly fed on plankton and fish eggs.

The girls were helping Meena, a marine biologist who was studying the whale sharks that swam through these waters. There was much to learn. While people knew that some whale sharks travelled thousands of kilometres around the world's oceans, no-one really knew how or where they bred.

It was Meena who dubbed this particular fish Big Mouth, because his mouth was so wide. Now she swam across to the girls and motioned for them to follow her. Together they skirted the reef and then dived down.

As Meena paddled on ahead, Bindi pointed out a stunning blue parrot fish to her friend. Nearby, a little clown fish was darting in and out of a colony of sea anemones. Through their diving masks the girls smiled and laughed.

With a kick of her flippers, Bindi dived down even deeper. Below her a long ledge of pink coral jutted out from the reef side. She swam above it, admiring a pair of striped yellow butterfly fish.

Then she spotted something lying on the coral below her. It was long and grey-brown. She swam a little closer. Bindi recognised it immediately due to the shape of the fish's head. It was a baby hammerhead shark.

But something was wrong. Bindi knew that sharks have to keep moving. They don't lie down and take a nap.

She swam even closer to examine the fish. It was still and lifeless. Dead. But worse, it was missing all its fins. Bindi could see where the fins had been cut off, with a sharp knife, by the look of it.

Bindi looked around for Meena and Kelly. They were not far off. She swam over and led them to the baby shark.

Meena shook her head. She pointed towards the surface. The girls nodded, and together they swam up slowly, heading back in the direction of the boat.

âThat shark has been finned!' Bindi shouted angrily when they surfaced.

Kelly tugged the air hose from her mouth. âWho would do that?' she said. âI thought shark finning was illegal in the Maldives!'

Meena pulled up her mask and shook the water from her face. âShark finning
is
illegal here. But it still goes on. At least they didn't get Big Mouth. I'd hate to see him killed off for a bowl of shark fin soup.'

âSo would I,' Bindi said. âBut hammerhead sharks are endangered. And it was just a baby! That's so wrong!'

âCome on, Bindi,' shouted Kelly. âLet's get back to the boat and see if we can catch those shark finners.'

âAnd if we do catch them,' Bindi called out to her friend as she swam off, âI'll turn
them
into soup!' 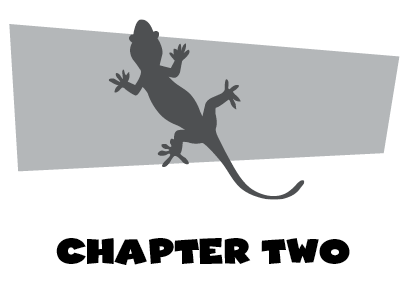 Back onboard the boat, Bindi, Kelly and Meena pulled off their diving gear and stowed it below deck.

When the girls had raised the anchor, Meena started the motor and slowly they chugged off in the direction of Male Atoll, where they were staying for the night at Meena's place.

It was early afternoon, but they had a long trip ahead of them, around the atoll and across the open sea.

Standing on the bow with Kelly, Bindi felt the sun warm on her skin. She looked down. The coral appeared as dark shapes below the aqua water. Here and there, it had grown so high it broke through the surface, little coral islands that seemed to float on the sea.

âSure is,' Kelly said. âBut we've got to suss out who finned that baby hammerhead. I'm still fuming about it!'

âMe too,' Bindi replied. âBut it could have been anyone! How do we find them?'

Kelly tapped her head. âWe'll need to use our noggins.'

Just then Bindi spotted a boat off to starboard. It was heading east, and would eventually cross their path.

She pointed. âThere's our first suspect.'

The boat was moving quickly, and soon they could see it was a âdhoni', like Meena's boat. A dhoni was a boat with a high, curved prow and traditionally made of coconut wood. It was unique to the Maldives, and many fishermen still used them here.

As the boat drew near, the girls heard a shout. They turned to see Meena waving madly.

âAh, they must be friends, not foe,' Kelly said.

Two people on the boat were waving back.

The girls ran across to Meena, who was sitting by the motor.

âYes, they're fellow scientists. They're studying the coral. I see them out here all the time.' Meena smiled. âTheir boat's a bit faster than mine.'

âA bit?' Kelly burst out laughing. âCompared to us they're flying!'

The boat overtook them and soon was just a dot on the sea. Kelly and Bindi returned to the bow to keep watch.

Another boat appeared some way behind them. Whatever kind of boat this one was, it was super fast. In a matter of minutes it had caught up with them.

The girls could see that the boat was a large modern fishing boat. It had red writing on its side.

âWhat's that big reel on the back?' Bindi asked Kelly.

âI think that's a long line,' Kelly replied. âThat's the new way they fish for tuna around here. Meena told me all about it.'

The fishing boat overtook them and sped on. Now they were travelling in its frothy wake, which looked like a road cut across the surface of the water.

âHow does the long line work?' Judging by the frown on Kelly's face, Bindi almost wished she hadn't asked.

Kelly slumped against the side of the boat. âWell, they let out a long fishing line, sometimes longer than 100 kilometres, with thousands of shorter lines hanging off it, each with a hook,' she said. âThey pull it through the water then later reel it all in. Sure, they catch plenty of tuna. But they also catch lots of other things â sharks, turtles, even dolphins. Most of them die â they're just called “bycatch”.'

Bindi narrowed her eyes, âI guess it's also an easy way to get your hands on shark fins.'

Kelly nodded. âMeena said shark fin is like rhino horn around here. It's really valuable. That's why that little hammerhead lost his fin. To thicken up some shark fin soup.'

Bindi felt her anger rise like an ocean wave. She looked down into the blue waters and thought about all the wonderful creatures that lived there.

The fishing boat's wake was still visible on the surface. Bindi spotted something lying directly in their path. It was another lifeless shark. This one was a reef shark. But like the little hammerhead, it was finless.

Bindi pointed it out to her friend. âThere's no time to waste, Kelly. We've got to find out who's doing this.'