Read Island Beneath the Sea Online

Island Beneath the Sea 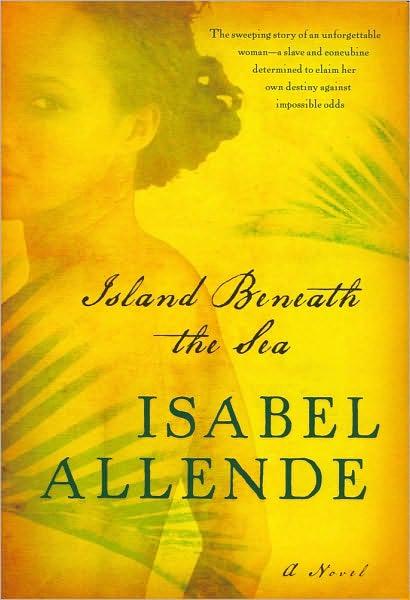 Island Beneath the Sea

Translated from the Spanish by Margaret Sayers Peden

To my children, Nicolas and Lori

The Bride from Cuba

The Madwoman of the Plantation

A Being Not Human

Slave to Every Need

Uprising in the North

The Taste of Freedom

The Paris of the Antilles

A Time of Hurricanes

The School in Boston

A Promise to Be Kept

The Saint of New Orleans

The Politics of the Day

Ball of the Sirens

To the Right of the Moon

Other Books by Isabel Allende

I
n my forty years I, Zarite Sedella, have had better luck than other slaves. I am going to have a long life and my old age will be a time of contentment because my star
--mi z'etoile--
also shines when the night is cloudy. I know the pleasure of being with the man my heart has chosen. His large hands awaken my skin. I have had four children and a grandson, and those who are living are free. My first memory of happiness, when I was just a bony, runny-nosed, tangle-haired little girl, is moving to the sound of the drums, and that is also my most recent happiness, because last night I was in the place Congo dancing and dancing, without a thought in my head, and today my body is warm and weary. Music is a wind that blows away the years, memories, and fear, that crouching animal I carry inside me. With the drums the everyday Zarite disappears, and I am again the little girl who danced when she barely knew how to walk. I strike the ground with the soles of my feet and life rises up my legs, spreads up my skeleton, takes possession of me, drives away distress and sweetens my memory. The world trembles. Rhythm is born on the island beneath the sea
;
it shakes the earth, it cuts through me like a lightning bolt and rises toward the sky, carrying with it my sorrows so that Papa Bondye can chew them, swallow them, and leave me clean and happy. The drums conquer fear. The drums are the heritage of my mother, the strength of Guinea that is in my blood. No one can harm me when I am with the drums, I become as overpowering as Erzulie
, loa
of love, and swifter than the bullwhip. The shells on my wrists and ankles click in time, the gourds ask questions, the
djembe
drums answer in the voice of the jungle and the timbales, with their tin tones. The
djun djuns
that know how to speak make the invitation, and the big
maman
roars when they beat her to summon the
loas.
The drums are sacred, the
loas
speak through them.

In the house where I spent my earliest years, the drums were silent in the room we shared with Honore, the other slave, but they were often taken out. Madame Delphine, my mistress then, did not want to hear the blacks' noise, only the melancholy laments of her clavichord. Mondays and Tuesdays she gave classes to girls of color, and the rest of the week she taught in the mansions of the
grands blancs,
where the mademoiselles had their own instruments because they could not use the ones the mulatta girls touched. I learned to clean the keys with lemon juice, but I could not make music because Madame Delphine forbade us to go near her clavichord. We didn't need it. Honore could draw music from a cookpot
;
anything in his hands had beat, melody, rhythm, and voice. He carried sounds inside his body
;
he had brought them from Dahomey. My toy was a hollowed gourd we made to rattle
;
later he taught me to caress his drums, slowly. And from the beginning, when he was still carrying me around in his arms, he took me to dances and voodoo services, where he marked the rhythm with his drum, the principal drum, for others to follow. This is how I remember it. Honore seemed very old to me because his bones had frozen stiff, even though at the time he was no older than I am now. He drank
taffia
in order to endure the pain of moving, but more than that harsh rum, music was the best remedy. His moans turned to laughter with the sound of the drums. Honore barely could peel sweet potatoes for the mistress's meal, his hands were so deformed, but playing the drum he never got tired, and when it came to dancing no one lifted his knees higher, or swung his head with more force, or shook his behind with more pleasure. Before I knew how to walk, he had me dance sitting down, and when I could just balance myself on two legs he invited me to lose myself in the music, the way you do in a dream. "Dance, dance, Zarite, the slave who dances is free...while he is dancing
,"
he told me. I have always danced.

T
oulouse Valmorain arrived in Saint-Domingue in 1770, the same year the dauphin of France married the Austrian archduchess, Marie Antoinette. Before traveling to the colony, when still he had no suspicion that his destiny was going to play a trick on him, or that he would end up in cane fields in the Antilles, he had been invited to Versailles to one of the parties in honor of the new dauphine, a young blonde of fourteen, who yawned openly in the rigid protocol of the French court. All of that was in the past. Saint-Domingue was another world. The young Valmorain had a rather vague idea of the place where his father struggled to earn a livelihood for his family with the ambition of converting it into a fortune. Valmorain had read somewhere that the original inhabitants of the island, the Arawaks, had called it Haiti before the conquistadors changed the name to La Espanola and killed off the natives. In fewer than fifty years, not a single Arawak remained, nor sign of them; they all perished as victims of slavery, European illnesses, and suicide. They were a red-skinned race, with thick black hair and inalterable dignity, so timid that a single Spaniard could conquer ten of them with his bare hands. They lived in polygamous communities, cultivating the land with care in order not to exhaust it: sweet potatoes, maize, gourds, peanuts, peppers, potatoes, and cassava. The earth, like the sky and water, had no owner until the foreigners, using the forced labor of the Arawaks, took control of it in order to cultivate never-before-seen plants. It was in that time that the custom of killing people with dogs was begun. When they had annihilated the indigenous peoples, the new masters imported slaves, blacks kidnapped in Africa and whites from Europe: convicts, orphans, prostitutes, and rebels. At the end of the 1600s, Spain ceded to France the western part of the island, which they called Saint-Domingue, and which would become the richest colony in the world. At the time Toulouse Valmorain arrived there, a third of the wealth of France, in sugar, coffee, tobacco, cotton, indigo, and cocoa, came from the island. There were no longer white slaves, but the number of blacks had risen to hundreds of thousands. The most intractable crop was sugarcane, the sweet gold of the colony; cutting the cane, crushing it, and reducing it to syrup was labor not for humans, as the planters maintained, but for beasts.

Valmorain had just turned twenty when he was summoned to the colony by an urgent letter from his father's business agent. When the youth disembarked, he was dressed in the latest fashion--lace cuffs, powdered wig, and shoes with high heels--and sure that the books he had read on the subject of exploration made him more than capable of advising his father for a few weeks. He was traveling with a valet nearly as elegant as he, and several trunks holding his wardrobe and his books. He thought of himself as a man of letters, and planned upon his return to France to dedicate himself to science. He admired the philosophers and encyclopedists who had in recent decades made such an impact in Europe, and he agreed with some of their liberal ideas. Rousseau's
Social Contract
had been his bedside book at eighteen. He had barely got off the ship, after a crossing that nearly ended in tragedy when they ran into a hurricane in the Caribbean, when he received his first disagreeable surprise: his progenitor was not waiting for him at the port. He was met by the agent, a courteous Jew dressed in black from head to foot, who informed him of the precautions necessary for moving about the island; he had brought him horses, a pair of mules for luggage, a guide, and militiamen to accompany him to the Habitation Saint-Lazare. The young man had never set foot outside France, and had paid very little attention to the stories--banal, furthermore--his father used to tell during his infrequent visits to the family in Paris. He could not imagine that he would ever visit the plantation; the tacit agreement was that his father would consolidate his fortune on the island while he looked after his mother and sisters and supervised the business in France. The letter he had received alluded to health problems, and he supposed that it concerned a passing fever, but when he reached Saint-Lazare, after a day's march at a killing pace through a gluttonous and hostile nature, he realized that his father was dying. He was not suffering from malaria, as Valmorain had thought, but syphilis,
le mal espagnol
, which was devastating whites, blacks, and mulattoes alike. His father's illness was in the last stages; he was covered with pustules, nearly incapacitated, his teeth were loose and his mind in a fog. The Dantesque treatments of bloodletting, mercury, and cauterizing his penis with red-hot wire had not given him relief, but he continued them as an act of contrition. Just past his fiftieth birthday, he had become an ancient giving nonsensical orders, urinating without control, and passing his time in a hammock with his pets, a pair of young black girls who had barely reached puberty.

Forgive Me by Beale, Ashley
Mark My Words by Addison Kline
The Bone Wall by D. Wallace Peach
Fighting for Arielle by Karina Sharp
Option to Kill (Nathan McBride 3) by Peterson, Andrew
Chew Bee or Not Chew Bee by Martin Chatterton
IGMS Issue 18 by IGMS
Bessica Lefter Bites Back by Kristen Tracy
Never Say Die by Carolyn Keene
A Father for Philip by Gill, Judy Griffith