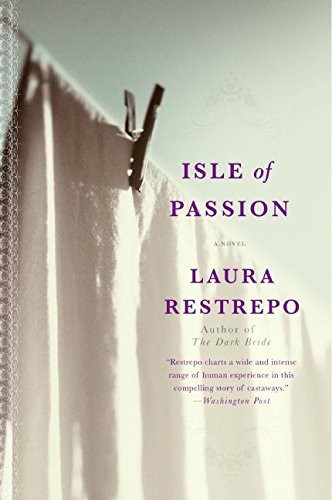 . . . and then, in a sort of ridiculous ceremony, they gave him the keys to the town and accepted him as the perpetual governor of the Island of Barataria.

High Seas, Aboard the Gunboat Yorktown, 1916

Praise for The Dark Bride

A
DOLL ABANDONED DECADES
ago is lying on the rocks. Her eyelashes have faded as well as the color of her cheeks. Animals have nibbled at her porcelain skin. Dumbstruck, she seems to observe everything with her emptied eye sockets, and to register all in her head, now etched out in places by exposure to sea salts.

After all the events that took place, the doll is still there, bearing dead witness, surrounded by thousands upon thousands of crabs that cover the sand in their turmoil, piling on top of one another in a frenzy of nervously moving layers; always around her and watchful in their siege of her hairless head and dismembered torso, peeking out the holes left by the lost arms and disappearing between her broken thighs.

The army of crabs squirms in puzzlement at this remotely human presence. Perhaps because, together with other undefinable remnants, the doll is the only human vestige still left on Clipperton Island.

On this same beach, where the doll now reigns over her hysterical court of crabs, a while back there were children running after booby birds, and women lifting their skirts to wet their feet in the pleasantly warm waters, while sailors unloaded crates of oranges and lemons.

But this was all before tragedy struck.

Afterward, nobody was either able or willing to return to Clipperton, except maybe a guano trader, and the half-dozen French sailors landing there once a month who, lulled by indifference and by the soporific vapors emanating from the land, performed the ritual of hoisting their country’s flag. Because Clipperton, which had been a Mexican territory in its golden age, had now become a French possession. This, too, in some way, as a result of the events that took place.

Including the French, whose names have long been forgotten, very few people have set foot on Clipperton throughout its history; so few, in fact, that by going carefully over the existing documents, and with only a small margin of error, a list of visitors could be drawn. Most stayed only a few hours, a few days maybe, and a very small number of people managed to stay there for years.

Those who have been there say that Clipperton is an unhealthy, unfriendly place. They claim that remnants of old shipwrecks surge onto its beaches with the tides and that there is an unpleasant smell of sulfur in the air, coming from a volcanic lagoon with poisoned water that neither tolerates animal life nor can be used to drink, and will burn the skin of anyone who attempts to bathe in it. This lagoon, nestled in an old crater, extends almost the full length of the atoll, about three miles, leaving as the only space for humans to tread a narrow ring of land around its brim, including beaches peppered with coarsely broken coral, and thirteen palm trees valiantly fighting the winds. Water surrounded by water; Clipperton is not much more than that.

One reason for Clipperton’s isolation is that it is so far away from everything, and the other is its insignificant size and land conditions. It has been described as so small that one can walk all around it in a single morning, starting out leisurely at seven and returning full circle just before noon.

It is also known that it lies on the Pacific Ocean, at 10° 13' north latitude and 105° 26' west, and that the closest land to it is the Mexican port of Acapulco, which is 511 nautical miles, or 945 kilometers, away. If you pictured it on a world map, it would be at the intersection of a line drawn south from Acapulco and another one going west from San José, Costa Rica, at the same distance from the equator as the cities of Cartagena in Colombia, and Maracaibo in Venezuela. Those are the known facts. Nevertheless, some navigational charts relegate the isle to uncertainty, marking its location with the initials D.E. (doubtful existence).

The name of the isle is not even its real name. “Clipperton” is an alias, a sleight of hand. One of the many ways in which the isle hides and confuses. The real name, given to it between 1519 and 1521 when for the first time Ferdinand Magellan saw it from afar, is the sweet—and at the same time awesome—name of Isle of Passion. A suggestive name in a schizophrenic way because of its contradictory meanings: “passion,” which may evoke love but also suffering, fervent enthusiasm as well as torment, affection, or, instead, lust. Anyone can verify, just by opening a dictionary of synonyms, the contrasting meanings of its name. The Isle of Passion was the name given to that atoll in the Pacific by Ferdinand Magellan, an old mariner who, by exploring so many unknown lands, learned to understand them at first sight.

Clipperton remains unpopulated not only because of its irrelevancy and isolation, but also, and above all, because the stubborn and angry isle has willed it that way. For centuries it has tried to become an unassailable fortress by building around itself, polyp by polyp, a living wall of coral reefs that lurks underwater with the intent of destroying any ship that comes near. This powerful reef is the only construction it tolerates, and in order to free itself from the others, from anything man-made, it acts as a magnet for hurricanes. Besides, the three large shoals that hug its coast will capsize every small boat and drown anyone who attempts to swim over them. And as for those who manage to land in spite of all hurdles and try to establish roots there in the illusion of having tamed it, the treacherous isle crushes them in the end with maledictions like scurvy, abandonment, and oblivion, and for every ounce of happiness it claims double in suffering.

Foul odors, pestilence, hurricanes, reefs, shoals—all true, but Clipperton cannot be as nefarious as it seems, because if it were, other events, equally true and historically undeniable, could not be justified: three-quarters of a century ago, a young officer of the Mexican Army, Captain Ramón Arnaud, and his new bride, Alicia Rovira, arrived there full of illusions, loaded with household items, and with the firm intention of populating the island with their descendants. The inhospitable Clipperton received them passively, allowed them to inhabit it without any fuss and be as happy there as Adam and Eve must have been in paradise.

Still an adolescent, Alicia found it a magical, romantic place, just as she had imagined it, and she fell in love with its sunsets and its peacefulness. Ramón Arnaud, an obscure character until then, who spoke French better than Spanish due to his ancestry, arrived at its shores hoping to start anew and erase his somewhat tarnished past. It was precisely there, in such a questionable, lost corner of the planet, that he was given the opportunity to make a heroic gesture defending Mexican sovereignty against real and imaginary enemies, the latter being no less formidable than the former.

That this story has a tragic ending does not belie the fact that Ramón and Alicia enjoyed a good life during their first five years on the Isle of Passion. So if it is true that this isle is neither hell nor paradise, if it evokes neither a joyous passion nor a painful one, then the remaining possibility is that Clipperton is nothing. Even its existence is doubtful: a tiny, imperceptible dot on the map, a place you may not find but from which you cannot escape. Storm swept, eroded by tides, erased from the charts, forgotten by men, lost in the middle of the ocean, once Mexican and now foreign, taken over, with its name changed and those who enacted its drama long dead. It just does not exist. There is no such place. An illusion at times, at others a nightmare, the isle is just that: a dream. Utopia.

Or is there someone who can attest to the contrary? Is there any survivor who still remembers, who could bear witness that it all happened?

T
HE
P
ENSIÓN
L
OYO IS
in Orizaba, at 124 Calle Sur II. It is actually a boardinghouse for automobiles. A large parking garage, gray like any other, attached to a house. I haven’t met the person who lives here, but it is the one I have been looking for in Manzanillo, in Mexico City, in Puebla, and beyond. Finally, after knocking on many wrong doors, poring through the telephone directories of those three cities, and consulting with public officials, admirals, deep-sea divers, pious church ladies, tarot card readers, and local historians, I came across someone on a street corner who, almost by chance, gave me this address. If it is correct, I will finally have found one of the last three survivors of the Clipperton tragedy.

It is Mrs. Alicia Arnaud, Mrs. Loyo until her husband died, who answers the door. As the second of the four children born to Captain Arnaud and his wife, Alicia, she is seventy-seven years old and does not at all want to remember. “Don’t come to stir up memories,” she says sweetly. But she knows the details; she can bear witness. In some dark corner of her mind this story that I am looking for is ensconced, well preserved. She knows, in her own flesh and bones, what happened there because when she was a child, early in the century, she lived through it all.