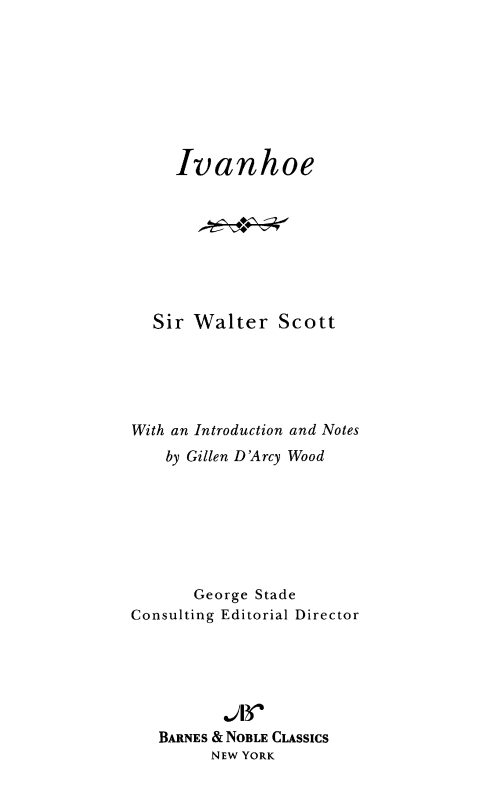 The date of our story refers to a period towards the end of the reign of Richard I., when his return from his long captivity had become an event rather wished than hoped for by his despairing subjects, who were in the meantime subjected to every species of subordinate oppression. (page 27)
“When the Knight of Ivanhoe comes within the four seas of Britain, he underlies the challenge of Brian de Bois-Guilbert, which, if he answer not, I will proclaim him as a coward on the walls of every Temple court in Europe.” (page 68)
The trumpets instantly sounded, while the heralds proclaimed the Lady Rowena the Queen of Beauty and of Love for the ensuing day, menacing with suitable penalties those who should be disobedient to her authority. (page 113)
He could not bring himself to acknowledge, in presence of such an assembly, the son whom he had renounced and disinherited.
(page 183)
Cedric, the instant that an enemy appeared, launched at him his remaining javelin, which, taking better effect than that which he had hurled at Fangs, nailed the man against an oak-tree that happened to be close behind him. Thus far successful, Cedric spurred his horse against a second, drawing his sword at the same time, and striking with such an inconsiderate fury that his weapon encountered a thick branch which hung over him, and he was disarmed by the violence of his own blow. (page 194)
“One foot nearer, and I plunge myself from the precipice; my body shall be crushed out of the very form of humanity upon the stones of that courtyard ere it become the victim of thy brutality!” (pages 235-236)
A moment of peril is often also a moment of open-hearted kindness and affection. We are thrown off our guard by the general agitation of our feelings, and betray the intensity of those which, at more tranquil periods, our prudence at least conceals, if it cannot altogether suppress them. (page 284)
“The castle burns,” said Rebecca—“it burns! What can we do to save ourselves?” (page 309)
“You are safe if you renounce Rebecca. You are pitied—the victim of magical delusion. She is a sorceress, and must suffer as such.” (page 367)
“Death is the least of my apprehensions in this den of evil.”
(page 394)
His opponents, desperate as they were, bore back from an arm which carried death in every blow. (page 415)
“Know me under the name which, I fear, fame hath blown too widely not to have reached even your royal ears: I am Robin Hood of Sherwood Forest.” (page 418)
Even in our own days, when morals are better understood, an execution, a bruising-match, a riot, or a meeting of radical reformers, collects, at considerable hazard to themselves, immense crowds of spectators. (page 443)
The flush passed from his brow, and gave way to the pallid hue of death. Unscathed by the lance of his enemy, he had died a victim to the violence of his own contending passions.
(pages 453-454)
These distinguished nuptials were celebrated by the attendance of high-born Normans, as well as Saxons, joined with the universal jubilee of the lower orders, that marked the marriage of two individuals as a pledge of the future peace and harmony betwixt two races, which, since that period, have been so mingled that the distinction has become wholly invisible. (page 461) 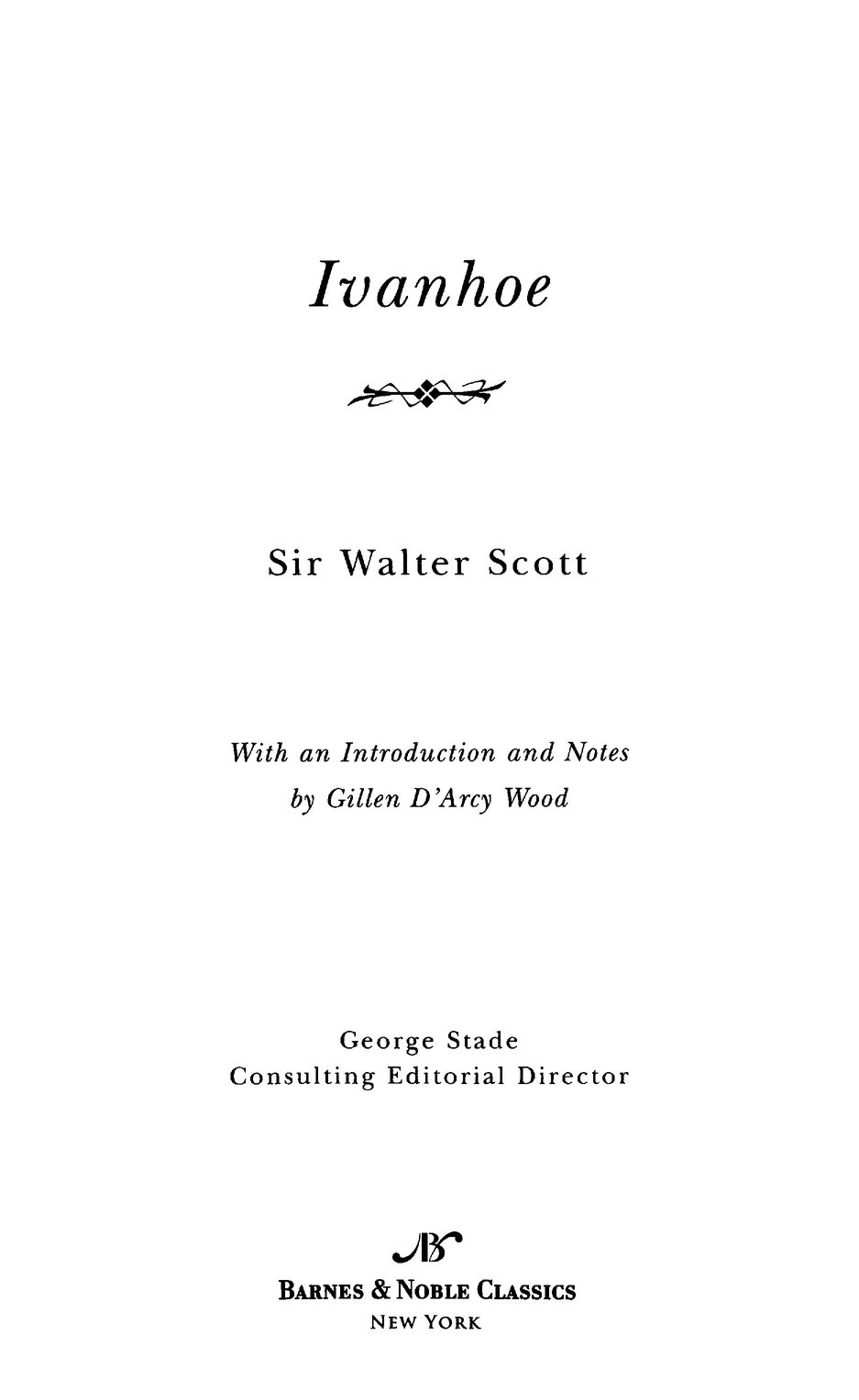 BARNES & NOBLE CLASSICS
NEW YORK
Published by Barnes & Noble Books
122 Fifth Avenue
New York, NY 10011
www.barnesandnoble.com/classics
Ivanhoe
was first published in 1819.
Published in 2005 by Barnes & Noble Classics with new Introduction,
Notes, Biography, Chronology, Inspired By, Comments & Questions,
and For Further Reading.
Introduction, Notes, and For Further Reading
Copyright © 2005 by Gillen D’Arcy Wood.
Note on Sir Walter Scott, The World of Sir Walter Scott and
Ivanhoe,
and Inspired by Sir Walter Scott and
Ivanhoe,
and Comments & Questions
Copyright © 2005 by Barnes & Noble, Inc.
All rights reserved. No part of this publication may be reproduced or
transmitted in any form or by any means, electronic or mechanical,
including photocopy, recording, or any information storage and retrieval
system, without the prior written permission of the publisher.
Barnes & Noble Classics and the Barnes & Noble Classics
colophon are trademarks of Barnes & Noble, Inc.
Ivanhoe
ISBN-10: 1-59308-246-0
ISBN-13: 978-1-59308-246-0
eISBN : 978-1-411-43242-0
LC Control Number 2005920890
Produced and published in conjunction with:
Fine Creative Media, Inc.
322 Eighth Avenue
New York, NY 10001
Michael J. Fine, President and Publisher
Printed in the United States of America
QM
3 5 7 9 10 8 6 4 2
Sir Walter Scott

The creator of the historical novel and one of the most popular writers of his era, Sir Walter Scott was born in Edinburgh, Scotland, on August 15, 1771. During his lifetime, Scott witnessed industrialization and worker rebellions, revolution and the Napoleonic wars. He saw Scotland rise from a fragmented backwater to become a sophisticated cultural center. His literary works consolidated national pride and materially contributed to Scotland’s cultural development. Despite the fascinating movements and upheavals of his own time, Scott found his true glory in the strife and striving of earlier eras. Inspired in his youth by ballads of his ancestors and their Border Wars with England, Scott spent his life looking to history to illuminate the present. Indeed, most of his works—including his greatest, and best-selling, novels such as
Ivanhoe
and
Rob Roy—offer
compelling images of times past.
As a solicitor and a writer to the signet, Scott’s father was well acquainted with land disputes among residents along the England-Scotland border that persisted well into the nineteenth century. His son experienced this storied area firsthand. After contracting polio when he was two years old, Walter was sent to his grandparents’ house in Sandy Knowe in the Border region to convalesce. There he developed a love of literature, gilded by his grandmother’s stories about the area. Permanently lamed but well enough to walk with a cane, Scott attended the High School in Edinburgh, where, along with the traditional ballads he loved, he favored the works of Shakespeare, Spenser, and Italian poet Ludovico Ariosto. Popular and intellectually promising, Scott studied the classics and law at Edinburgh University.
ADS
15.4Mb size Format: txt, pdf, ePub

The Voodoo Killings by Kristi Charish
The Prince of West End Avenue by Alan Isler
The Wasteland Soldier, Book 3, Drums Of War (TWS) by Moore, Laurence
Office Toy 2 Client Satisfaction by Cleo Peitsche
Sacrifice Fly by Tim O'Mara
Hide From Evil by Jami Alden
Spring Will Be Ours by Sue Gee
El bokor by Caesar Alazai
The Tower Grave by J.E. Moncrieff
The Further Adventures of Ebenezer Scrooge by Charlie Lovett