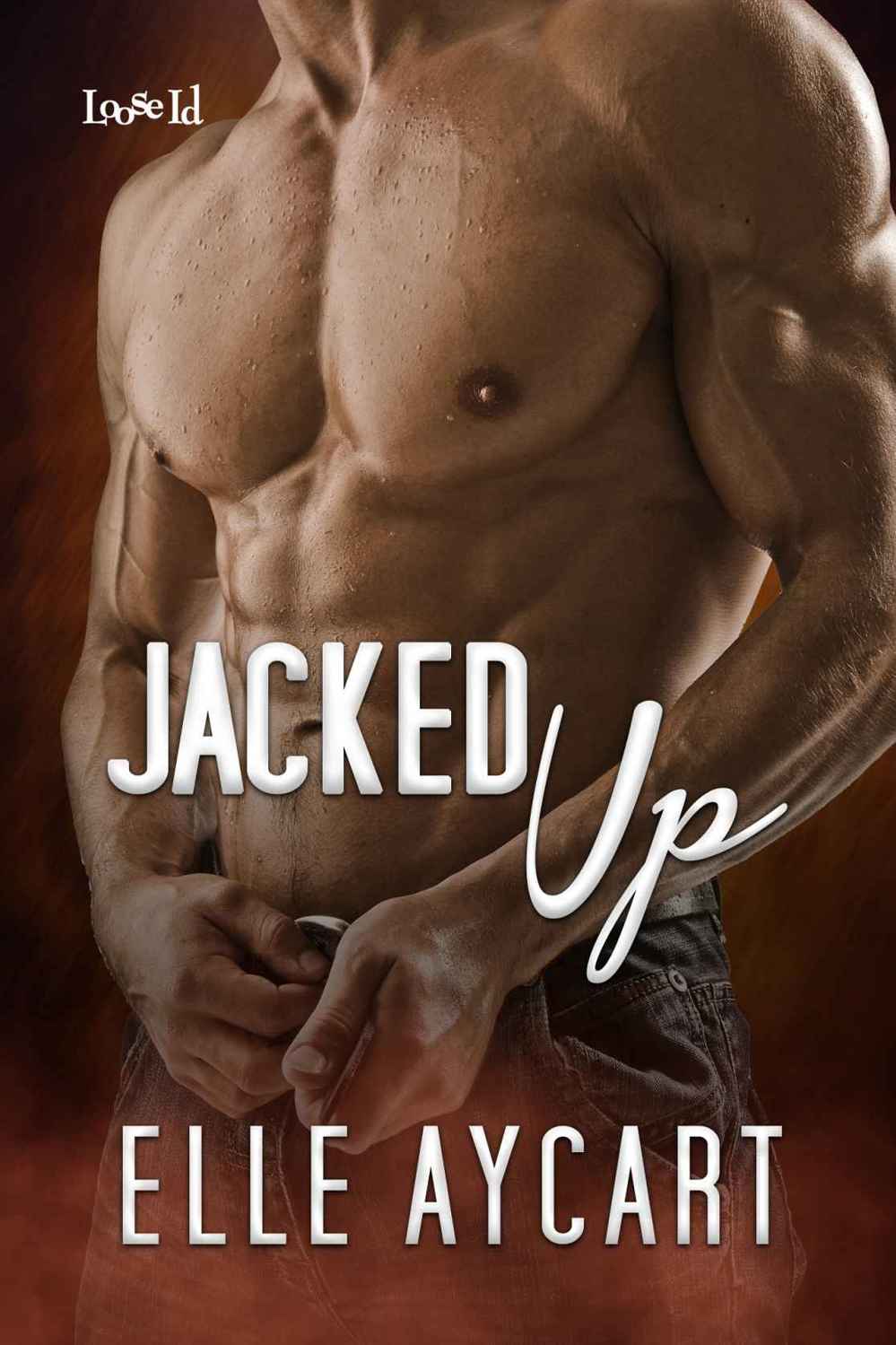 To my mother, who passed away unexpectedly twenty days before this book was released.

You were as beautifully stunning as stunningly complicated. I hope you finally found in heaven the peace you so desperately sought on earth.

Thinking with his dick was going to get Jack killed.

The guys he was dealing with wouldn’t hesitate to reach down his throat, rip his balls off, and make a Colombian necktie with them at the slightest hint of weakness. Or deception. Heck, just for the sheer fun of it. No big reason needed.

He logged in to his e-mail account, the one he was supposed to ignore, hands fucking sweaty. His heart leaped, lodging in his throat. Yeah, there it was. Unopened mail. From her.

He should have deleted this address the second she’d gotten her pretty, meddling little hands on it. Definitely before taking the new assignment. At the very least forget its existence. There was a reason for breaking all ties. Ties were dangerous, but here he was, literally unable to go a handful of days without checking that damn account. His only lifeline to the outside world. To her.

Yo, Borg, I thought I’d give you the immense honor of my company, even if you clearly don’t deserve it. It’s Christmas. No one should be alone on Christmas. Not even rude, insensitive assholes.

Such a smart-ass. He could see her in his mind’s eye. All sass, throwing attitude left and right. That glossy dark hair cascading down around her shoulders, framing her killer, hourglass body, those big, bottomless black eyes narrowed at him, challenging him. Pissing him off and giving him the biggest hard-on of his life at the same time. Elle Cooper, the bane of his existence.

Is it snowing where you are? I hope you get a white Christmas.

Jack looked around him. He was in a helicopter in the middle of a jungle in buttfuck nowhere, supervising a weapons run, and the only thing coming from the sky was a permanent horde of vicious mosquitos he’d long ago stopped caring about. Nope, no white Christmas for him. Not any other kind either.

Wherever you are, I’m sure you’ve booby-trapped the chimney, hell, the whole place, and Santa won’t be able to drop by to leave you anything without risking his life in the process, so I’ve sent you a present. A cyberpresent, as I’m positive you would have to kill me if you were to give me an address.

He clicked on the attachment and something exploded on the screen.

A Christmas card for badasses
, it read, with Santa parachuting down sporting commando clothes and an Uzi.

Jack cracked a smile, the muscles of his face complaining at the rare gesture.

He hadn’t seen her since James’s wedding in August, yet her image was as fresh in his mind as if she were standing in front of him. All he had to do was close his eyes and there she was with him, in full 3-D and surround sound, exuding sex appeal and attitude and the most potent pheromones he’d ever experienced and against which he didn’t seem to have defenses.

He should have stayed away from her at the wedding, but with him being best man and her maid of honor, it had been virtually impossible, especially when the bride and groom had insisted on them dancing. Against his better judgment he’d acceded, and now the feel of her luscious curves were imprinted in his hands. In his brain really. Her sweet scent too. He’d avoided touching her for a reason and this, his pathetic, juvenile behavior while undercover, in the face of mortal danger, was exactly why.

He’d remained grim and silent during their dance, clenching his teeth, trying to block the sensory bombardment, but it had been too late. And she’d known it. She’d smiled that teasing smile of hers. So fucking beautiful. And so fucking aggravating.

He’d been under for five months, monitoring the flow of illegal weapons to the rebels and watching those motherfuckers use the assault rifles and rocket launchers on civilians and peacekeepers. Five of the shittiest, most miserable months of his entire existence—which was saying a lot, seeing as he’d had pretty crappy assignments before; the only points of light were her wiseass e-mails. He’d gotten a zillion—well, ninety-three to be exact. For a guy who only got encrypted messages—a couple a month, tops, ninety-three were a shitload. Some of them were barely a line. A “Yo, Borg, sweet dreams, wherever you are.” Others were pages long.

His brain had ordered him ad nauseam to block her address. End of issue. No more spam. No more Elle intruding into his personal space, forcing him to interact with the real world. Ha! Like there was a chance in hell his body would follow through on that executive decision. He’d reread her messages many times. Knew them by heart. The sarcastic cracks too. He couldn’t get enough of her. Even when she just talked about her day, he’d greedily read every word, soaking them in. What was said, and what wasn’t.

Checking the sender’s details, he realized she’d written to him in the wee hours. Again. What the hell was she doing up at that time, on a regular Tuesday? And that was not an exception; it was the norm. Elle was a party girl. Always shit to do. Places to go. Men to entice. Not that she had to put too much effort into it; they trailed after her like lovesick puppies, ready to lick her toes and worship at her altar for just a smile. She was the kind of woman for whom necks snapped whenever she entered a room, and when she left it, there wasn’t a single guy not following her gorgeous behind. The kind of woman one could look at but should never touch. You touch her, you get burned. Jack was too old and jaded for that kind of crap. The aftermath of such a rollercoaster would be a killer. He’d rather get shot in the stomach and be left to die, thank you very much. Less painful.

He repeated that to himself but continued reading.

As you can see from the pictures, all is good here. We had a full house for Christmas. I was supposed to work but Aunt Maggie swore she’d hunt me down if I didn’t show up. Mr. Bowen came from Florida. Christy’s mom from L.A. All the Bowens and their women were there. Lots of fun. It would have been funnier with you, of course, barrel of laughs that you are. Life and soul of the party, really.

Right.
She
was the life and soul of the party. Of any party. She just had to smile to be the center of attention. Hell, all she had to do was show up.

He glanced at the second attachment. Pictures probably. Elle always sent him photos, which he normally refused to look at, stashing them in a file in the cloud. It was bad enough this idiocy he had going on; no need to go the whole nine yards. But today he needed too much. In three minutes it would be his birthday. Thirty-six and shit to show for it. No wife, no kids. A half-decent day at work was one he survived unscathed while dealing with crazy fanatics. He was so wound up he couldn’t contain himself, and, gut churning, he opened the file where he’d gathered everything she’d sent.

One look and his throat clogged. Fuck, she always knew what he needed. There were shots of Alden and the Bowens, all laughing. Barbecues. Birthday parties. The newest were from Christmas Eve. Max with his hands on the pregnant belly of his new lady friend, the one Elle had talked to Jack about. The one prone to weird accidents. It seemed like the last Bowen had already bit the dust, willingly, with a big, sappy smile on his face. Jack’s chest tightened. Love and family and friends, the very things he was missing the most.

He reached into his pocket and took an antacid. His stomach had been bulletproof. Until Elle. Now he had a fucking hole the size of Texas, or so he thought. He was still in denial and refusing to go to the doc, living under the illusion that whenever his exposure to her ended, the ulcer would disappear.

He chewed the tablet, ignoring the chalky taste, and continued with his foolish task. Rosita’s was featured very prominently too. Not so much Elle, who was always the one behind the camera. She was only in a couple of shots. In one she was showing her tongue and making a face. In the other she was laughing, hugging James and her sister Tate.

At that moment an e-mail appeared in his inbox from Party Girl. He looked at the time stamp: 00:01, rather early for her.

Without thinking, he clicked on it.

Don’t look so surprised; you know I’m very resourceful. It wasn’t easy, let me tell you, to get it out of James. It was a slip, long time ago, but I have a great memory. He never said your actual age so don’t freak on me, big boy, your secret is safe.

I would have never pegged you for a Capricorn though. I thought you’d be a Scorpio; after all, most dangerous sociopaths are born in November…

Then again, being a goat suits you too.

Wherever you are, whatever you are doing, I hope you have a fabulous day. You would have a much better time with us, but you can’t have everything in life, can you?

No, he couldn’t. Learned that long ago.

Don’t have much time now, too busy at Rosita’s. Just wanted to be the first to congratulate you on your birthday—or your assembly day—however your kind of people are made.

I’ll write to you later.

Always a Princess by Alice Gaines
The Broken and the Dead (Book 1) by Morris, Jay
Last Line by Harper Fox
Facing the Hunter by David Adams Richards
Epic Retold: The Mahabharata in Tweets by Chindu Sreedharan
Counter Poised by John Spikenard
Just Friends by Sam Crescent
Works of Alexander Pushkin by Alexander Pushkin
Binding Spell (Tales of the Latter Kingdoms) by Pope, Christine
Day of the Bomb by Steve Stroble