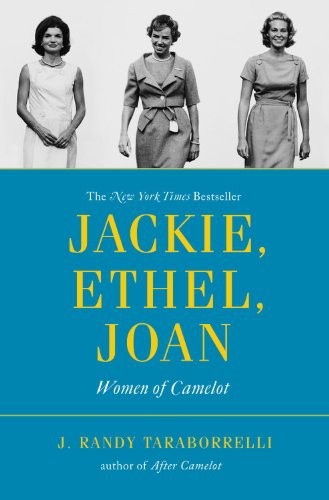 “I know,” Jackie murmured back. She smiled genuinely at the other Mrs. Kennedy, visibly touched that Ethel would want to pass on to her the one thing that had never failed to help her through her own troubles—her unwavering faith. She told Ethel that they would “always be family,” even if they did have their differences.

Upon hearing Jackie’s reaffirmation of familial ties, Ethel let loose a torrent of words and tears so uncharacteris- tic of her it stunned everyone in the room. The two women embraced, with Ethel burying her head in Jackie’s shoulder. Then Ethel fled the room.

When Jackie noticed Joan, she went to her. They embraced, and almost immediately Joan began to sob. Jackie appeared strong and tearless.

“It’s all right, Joan,” Jackie whispered. “Let it all out. Let every bit of it out.”

“Taraborrelli brings to life the decades that Jackie, Ethel, and Joan spent together as sisters-in-law with the many moments—good and bad—the women shared. . . . In docu- menting their strengths and idiosyncrasies, the author actual- ly makes us realize that not only were these great women human, they were also great human beings.”

All rights reserved. No part of this book may be reproduced in any form or by any electronic or mechanical means, including informa- tion storage and retrieval systems, without permission in writing from the publisher, except by a reviewer who may quote brief pas- sages in a review.

Visit our Web site at www.twbookmark.com

As always, for Rose Marie Taraborrelli

C
onsidering the many hundreds of books published about members of the Kennedy family over the last forty years, it’s surprising that no author before me has attempted an in- depth examination of the relationships among the sisters-in- law, Jackie Bouvier Kennedy, Ethel Skakel Kennedy, and Joan Bennett Kennedy. While it had been long assumed by some observers that no connection existed among the three women, I always believed that their lives—as well as those of their families—were so completely transformed by mar- rying three of Joseph P. Kennedy’s sons that there would at least be some interesting interplay among them. And if there were no relationship at all, I decided, then the reasons for such estrangement could also prove to be interesting. As it turned out, much to my fascination, they related to one an- other very much like sisters—sometimes lovingly, some- times contentiously.

The concept behind this book has been an interest of mine for many years, dating back to January 1980 when, as a Los Angeles magazine reporter specializing in African-American pop culture, I was given the unusual assignment to write a

series of articles about the Kennedy family’s relationship with that of Martin Luther King Jr.’s for a magazine called
Soul
(which I would later edit and publish). As part of my research, I not only interviewed King’s widow, Coretta Scott-King (excerpts of which are included in this text), I also conducted a number of personal interviews and had many conversations with longtime Kennedy family friend and unofficial historian Kirk LeMoyne “Lem” Billings. At first I found Lem to be a difficult and conflicted person, but I later learned that his complexities were the result of his loving but often ambivalent relationship with the powerful Kennedy family. As a college roommate of John Kennedy’s and constant companion to many family members, he was a fountain of information for me and—as I found out after conducting hundreds of interviews with others—he was ac- curate in just about every observation he ever made about any of the Kennedys.

He told me one story that I didn’t use in the text of this book, but it illustrates the kind of relationship he had with Jack and Jackie.

Lem was a big fan of Greta Garbo’s, whom he had once met at the Cannes Film Festival. “I was obsessed with her,” he told me, “and couldn’t stop talking about her for quite some time. Jackie told me she was sick of hearing about her. I couldn’t blame her.”

The President and First Lady decided to play a practical joke on Lem. They invited Greta Garbo to the White House for a private dinner. They also invited Lem. When he showed up, he found his idol, Garbo, casually sitting with Jack and Jackie, talking and laughing as if they were old friends (which they weren’t). Lem was astonished. “Why, Greta! Oh my gosh. How are you?” he said excitedly. After

the actress had sized Lem up from head to toe as only Greta Garbo could, she turned to Jackie and, in her most imperious tone, said, “Who
is
this man?” (Many years later, in the 1980s, Jackie would tell her secretary and close friend Nancy Tuckerman that she herself was fascinated by Garbo, so much so that she once followed her through the streets of New York for ten blocks “before she finally lost me.”)

When Lem died of a heart attack at the age of sixty-five in May 1981, the Kennedys paid tribute to him at his funeral. “Yesterday was Jack’s birthday,” Eunice Kennedy Shriver said in her moving eulogy. “Jack’s best friend was Lem, and he would want me to remind everyone of that today. I am sure the good Lord knows that heaven is Jesus and Lem and Jack and Bobby loving one another.” At the time of our in- terviews, though, it seemed that Lem Billings’s status in the family was in jeopardy as a result of personal disagree- ments. “I think they hate me now” is how the emotionally charged Billings put it to me. “I doubt they ever appreciated me. To the Kennedys, the line between love and hate is not only thin, it’s blurred. But love knows many paths,” he con- cluded, “and always finds its way back to the right heart.”