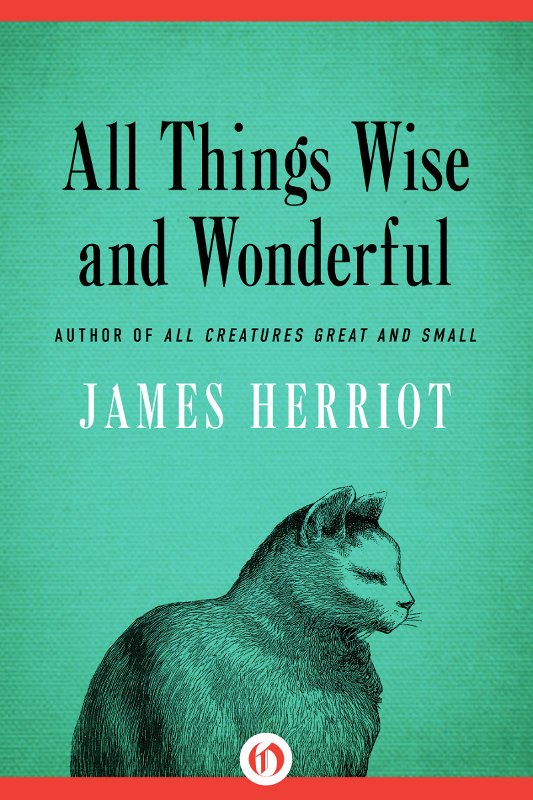 Faithful companions of the daily round

All things bright and beautiful,

All creatures great and small,

All things wise and wonderful,

The Lord God made them all.

A Biography of James Herriot

“M
OVE!”
B
AWLED THE DRILL
corporal. “Come on, speed it up!” He sprinted effortlessly to the rear of the gasping, panting column of men and urged us on from there.

I was somewhere in the middle, jog-trotting laboriously with the rest and wondering how much longer I could keep going. And as my ribs heaved agonisingly and my leg muscles protested I tried to work out just how many miles we had run.

I had suspected nothing when we lined up outside our billets. We weren’t clad in PT kit but in woollen pullovers and regulation slacks and it seemed unlikely that anything violent was imminent. The corporal, too, a cheerful little cockney, appeared to regard us as his brothers. He had a kind face.

That had been a long, long time ago and we were still reeling through the London streets with never a sign of a park anywhere. The thought hammered in my brain that I had been under the impression that I was fit. A country vet, especially in the Yorkshire Dales, never had the chance to get out of condition; he was always on the move, wrestling with the big animals, walking for miles between the fell-side barns; he was hard and tough. That’s what I thought.

But now other reflections began to creep in. My few months of married life with Helen had been so much lotus eating. She was too good a cook and I was too faithful a disciple of her art. Just lounging by our bed-sitter’s fireside was the sweetest of all occupations. I had tried to ignore the disappearance of my abdominal muscles, the sagging of my pectorals, but it was all coming home to me now.

“It’s not far now, lads,” the corporal chirped from the rear, but he struck no responsive chords in the toiling group. He had said it several times before and we had stopped believing him.

But this time it seemed he really meant it, because as we turned into yet another street I could see iron railings and trees at the far end. The relief was inexpressible. I would just about have the strength to make it through the gates—to the rest and smoke which I badly needed because my legs were beginning to seize up.

We passed under an arch of branches which still bore a few autumn leaves and stopped as one man, but the corporal was waving us on.

“Come on, lads, round the track!” he shouted and pointed to a broad earthen path which circled the park.

We stared at him. He couldn’t be serious! A storm of protest broke out.

The smile vanished from the little man’s face. “Get movin’, I said! Faster, faster … one-two, one-two.”

As I stumbled forward over the black earth, between borders of sooty rhododendrons and tired grass, I just couldn’t believe it. It was all too sudden. Three days ago I was in Darrowby and half of me was still back there, back with Helen. And another part was still looking out of the rear window of the taxi at the green hills receding behind the tiled roofs into the morning sunshine; still standing in the corridor of the train as the flat terrain of southern England slid past and a great weight built up steadily in my chest.

My first introduction to the RAF was at Lord’s cricket ground. Masses of forms to fill, medicals, then the issue of an enormous pile of kit. I was billeted in a block of flats in St. John’s Wood—luxurious before the lush fittings had been removed. But they couldn’t take away the heavy bathroom ware and one of our blessings was the unlimited hot water gushing at our touch into the expensive surroundings.

After that first crowded day I retired to one of those green-tiled sanctuaries and lathered myself with a new bar of a famous toilet soap which Helen had put in my bag. I have never been able to use that soap since. Scents are too evocative and the merest whiff jerks me back to that first night away from my wife, and to the feeling I had then. It was a dull, empty ache which never really went away.

On the second day we marched endlessly; lectures, meals, inoculations. I was used to syringes but the very sight of them was too much for many of my friends. Especially when the doctor took the blood samples; one look at the dark fluid flowing from their veins and the young men toppled quietly from their chairs, often four or five in a row while the orderlies, grinning cheerfully, bore them away.

We ate in the London Zoo and our meals were made interesting by the chatter of monkeys and the roar of lions in the background. But in between it was march, march, march, with our new boots giving us hell.

And on this third day the whole thing was still a blur. We had been wakened as on my first morning by the hideous 6 a.m. clattering of dustbin lids; I hadn’t really expected the silvery tones of a bugle but I found this totally unromantic din intolerable. However, at the moment my only concern was that we had completed the circuit of the park. The gates were only a few yards ahead and I staggered up to them and halted among my groaning comrades.

“Round again, lads!” the corporal yelled, and as we stared at him aghast he smiled affectionately. “You think this is tough? Wait till they get hold of you at ITW. I’m just kinda breakin’ you urgently. You’ll thank me for this later. Right, at the double! One-two, one two!”

Bitter thoughts assailed me as I lurched forward once more. Another round of the park would kill me—there was not a shadow of a doubt about that. You left a loving wife and a happy home to serve king and country and this was how they treated you. It wasn’t fair.

The night before I had dreamed of Darrowby. I was back in old Mr. Dakin’s cow byre. The farmer’s patient eyes in the long, drooping-moustached face looked down at me from his stooping height.

“It looks as though it’s over wi’ awd Blossom, then,” he said, and rested his hand briefly on the old cow’s back. It was an enormous, work-swollen hand. Mr. Dakin’s gaunt frame carried little flesh but the grossly thickened fingers bore testimony to a life of toil.

I dried off the needle and dropped it into the metal box where I carried my suture materials, scalpels and blades. “Well, it’s up to you of course, Mr. Dakin, but this is the third time I’ve had to stitch her teats and I’m afraid it’s going to keep on happening.”

“Aye, it’s just the shape she is.” The farmer bent and examined the row of knots along the four-inch scar. “By gaw, you wouldn’t believe it could mek such a mess—just another cow standin’ on it.”

That was the worst of very old cows. Their udders dropped and their teats became larger and more pendulous so that when they lay down in their stalls the vital milk-producing organ was pushed away to one side into the path of the neighbouring animals. If it wasn’t Mabel on the right standing on it, it was Buttercup on the other side.

There were only six cows in the little cobbled byre with its low roof and wooden partitions and they all had names. You don’t find cows with names any more and there aren’t any farmers like Mr. Dakin, who somehow scratched a living from a herd of six milkers plus a few calves, pigs and hens.

“Aye, well,” he said. “Ah reckon t’awd lass doesn’t owe me anythin’. Ah remember the night she was born, twelve years ago. She was out of awd Daisy and ah carried her out of this very byre on a sack and the snow was comin’ down hard. Sin’ then ah wouldn’t like to count how many thousand gallons o’ milk she’s turned out—she’s still givin’ four a day. Naw, she doesn’t owe me a thing.”

As if she knew she was the topic of conversation Blossom turned her head and looked at him. She was the classical picture of an ancient bovine; as fleshless as her owner, with jutting pelvic bones, splayed, overgrown feet and horns with a multitude of rings along their curving length. Beneath her, the udder, once high and tight, drooped forlornly almost to the floor.

She resembled her owner, too, in her quiet, patient demeanour. I had infiltrated her teat with a local anaesthetic before stitching but I don’t think she would have moved if I hadn’t used any. Stitching teats puts a vet in the ideal position to be kicked, with his head low down in front of the hind feet, but there was no danger with Blossom. She had never kicked anybody in her life.

Mr. Dakin blew out his cheeks. “Well, there’s nowt else for it. She’ll have to go. I’ll tell Jack Dodson to pick ’er up for the fatstock market on Thursday. She’ll be a bit tough for eatin’ but ah reckon she’ll make a few steak pies.”

He was trying to joke but he was unable to smile as he looked at the old cow. Behind him, beyond the open door, the green hillside ran down to the river and the spring sunshine touched the broad sweep of the shallows with a million dancing lights. A beach of bleached stones gleamed bone-white against the long stretch of grassy bank which rolled up to the pastures lining the valley floor.

I had often felt that this smallholding would be an ideal place to live; only a mile outside Darrowby, but secluded, and with this heart-lifting vista of river and fell. I remarked on this once to Mr. Dakin and the old man turned to me with a wry smile.

“Aye, but the view’s not very sustainin’,” he said.

It happened that I was called back to the farm on the following Thursday to “cleanse” a cow and was in the byre when Dodson the drover called to pick up Blossom. He had collected a group of fat bullocks and cows from other farms and they stood, watched by one of his men, on the road high above.

“Nah then, Mr. Dakin,” he cried as he bustled in. “It’s easy to see which one you want me to tek. It’s that awd screw over there.”

He pointed at Blossom, and in truth the unkind description seemed to fit the bony creature standing between her sleek neighbours.

The farmer did not reply for a moment, then he went up between the cows and gently rubbed Blossom’s forehead. “Aye, this is the one, Jack.” He hesitated, then undid the chain round her neck. “Off ye go, awd lass,” he murmured, and the old animal turned and made her way placidly from the stall.

“Aye, come on with ye!” shouted the dealer, poking his stick against the cow’s rump.

Dodson looked at him in surprise. “Ah never ’it ’em, you know that. Just send ’em on, like.”

“Ah knaw, ah knaw, Jack, but you won’t need your stick for this ’un. She’ll go wherever ye want—allus has done.”