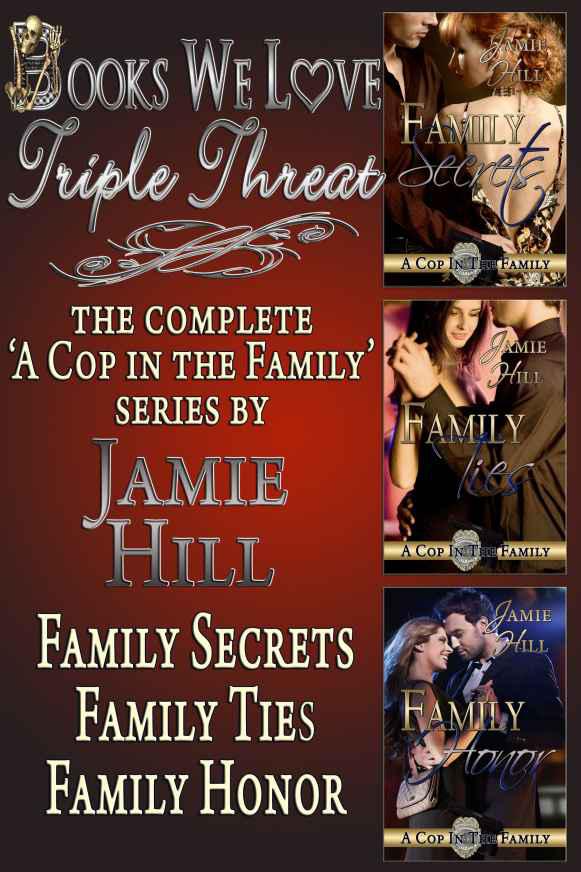 Family Secrets
As if stumbling over a dead body isn't enough, Crystal Cartwright finds herself playing surrogate mother to two small boys when their father--her neighbor--doesn't come home. The kids aren't much trouble, but the thieves, drug dealers and kidnappers they're about to encounter are.

Detective Jack Dunlevy, a cop down on his luck, draws the cases no one else wants. A simple investigation involving a dead homeless man quickly changes as Crystal enlists Jack's help with the children. Drawn into a mystery that none of them could have anticipated, they're faced with a situation that will change their lives forever.

Family Ties
With a couple of dead bodies thrown in, Detective Brady Marshall's stolen goods case has just become a lot more interesting. His love life takes a turn for the better when he meets Gina Morris, a feisty waitress at the club where the latest victim has surfaced. A happily unattached ladies' man, Brady isn't looking to settle down. But after meeting the beautiful Italian spitfire, his thoughts are shifting in that direction.

Gina Morris doesn't date cops. Until she meets Brady, that is, and gets won over by his dogged persistence and winning smile. With things in her past that are best left unspoken, Gina hesitates to get too close, but can't resist the handsome detective's charm. When his case runs smack dab into her past life, both of them are forced to make choices they never dreamed possible in an attempt to salvage their relationship, and possibly even save their lives.

Family Honor
Bodies of dead women are piling up and Detective Melanie Curtis is doing everything she can to solve the 'Cheerleader Slasher' case. Surprised to discover her chief has requested help from the FBI, she's even more shocked when she meets the sexy FBI special agent sent to assist her.

SSA Nate Willis tracks serial killers for a living. The slasher case is a challenge, but nothing compared to the feisty police detective he finds leading the investigation. Their attraction is swift and mutual, but the killer is escalating and they need to solve the case before they can focus on their personal relationship. When the unthinkable happens and the investigation is turned upside down, is their chance for happiness also in jeopardy?

Thanks for checking out my work. This is the complete collection of my romantic suspense series "A Cop in the Family": Family Secrets, Family Ties and Family Honor.

I also have a short romantic suspense novella available in Kindle format only called On the Edge.

If you like straight romance, may I suggest Secrets and Lies, Hide and Seek and it's sequel, Run to Me.

My collection of romantic short stories is pulled together into one book called Impulsive, and each story is available separately as a 99 cent Amazon short.

I'm currently working on a new romantic suspense series for the fall/winter of 2012 called Witness Security.

I hope you enjoy!

Jamie Hill was born and raised in a beautiful, mid-sized town in Midwest, USA. At various times she wanted to be a veterinarian, teacher, cheerleader, TV star or a famous singer. The one thing she always wanted to be was a writer. Starting at about age ten, she penned romance as she envisioned it in one spiral notebook after another. When she's not working at the day job she loves, Jamie enjoys spending time with her family, reading, and watching movies (the scarier the better!) In her 'spare time' she can often be found writing, editing, or doing something more mundane like housework. After that, she's probably taking a nap. She loves to hear from readers, so feel free to drop her a line.

Jamie Hill – A Cop In The Family - Collection

from Books We Love

To John, for encouraging me when all I could see were rejections. You're the best. Here's to another great thirty years.

She thought about stepping over the body, but that would be awkward while she held hands with the children. The body of Manny, the homeless guy who hung out by the door of her apartment building, lay spread across the entrance. There was no way around it.
Him
.

Crystal
tugged the boys backwards, away from the body. They didn’t need to see him that way, but she supposed it was already too late. She could see in their little eyes that they were soaking up everything happening around them like sponges.

“Come on.” She led them to a bench a few steps away from the door. It was an old bus bench, from when the busses bothered to stop in the neighborhood. Now people dragged the bench wherever they wanted it. The past couple weeks it had been parked in front of her building.

Fat chance of finding a bus around here now.
Crystal
pulled a pack of cigarettes from her pocket and lit one up.

“Is he really dead?” a voice said softly from the bench next to her.
Crystal
looked from the child to Manny sadly.

“I guess so,” she replied. “Sorry, I know this is kind of scary for you.” She had a thought and looked over to the alley next to her building for the other man she knew was hiding there. “Hey Ralph! Did you check his pulse? I mean, maybe Manny just passed out or something.”

“Not me. No way, nuh-uh!” The little man skittered around in the shadows nervously. “Mrs. G, she touched him. She called the cops.”

“Yeah.”
Crystal
nodded and puffed on her cigarette. Mrs. Gianelli from
apartment
1A
would be the first neighbor to notice Manny and call it in.
Crystal
didn’t know anyone who kept a more watchful eye on a place. She supposed that came from having nothing to do all day but look out the window. Mrs. Gianelli was eighty-seven years old, and when she wasn’t peering out from behind her tattered curtains,
Crystal
knew she stared at the TV for hours on end. She wasn't sure which the old woman preferred. The myriad of crime shows on TV, or the real-life crime scene playing out on the sidewalk in front of her right now. Mrs. G. was probably having a heyday with her front row seat.

Crystal
was sickened by the whole event. Manny had been mentally challenged, in some ways he'd acted just like the boys. He'd always been glad to see them, and they'd usually shared some superhero information tidbits with each other.
Crystal
sighed. She hated to see anything happen to someone so innocent. No, "innocent" wasn’t exactly the right word. She imagined Manny had seen a lot living on the streets as he had. But he'd seemed naïve and almost
childlike.
That was the word she wanted.

“Say, uh,
Crystal
…?” Ralph kept in the shadows next to the building but worked his way closer to her. He didn’t smell very good, but
Crystal
felt sorry for him. She suspected he wasn’t quite right in the head, either. But like Manny, Ralph was harmless and
Crystal
knew he’d sooner run from a fly than kill one.

“Oh, yeah.”
Crystal
looked down at the paper bag she absent-mindedly clutched in her hand. “Here you go.” She tossed the bag to him and he grabbed for it. “Roast beef today. It’s pretty good.”

He grinned and opened the sack. “Thanks.” He sunk back into the shadows as he ate.

Crystal
took a drag on her cigarette and watched as two uniformed police officers approached Manny. They checked him for vital signs, then began asking Ralph questions. Ralph answered, shoving the last of the sandwich in his mouth and talking at the same time.

“Mrs. Gianelli?” A shadow came over the bench as a man stepped in front of Crystal and the children.

She inhaled the last of her smoke and dropped the butt on the sidewalk, grinding it out with the toe of her shoe. She looked up slowly at the cop in front of her. He wasn’t uniformed but even in faded jeans, a black t-shirt and a leather jacket,
Crystal
knew he was a cop. The small notepad and pen he held was one giveaway. The other was his eyes. He had a cop’s tired eyes. “Nope,” she finally answered after giving him the once-over. “You’ll find her in 1A. I live in 3G.”

“And you would be?” he asked pleasantly.

She looked him up and down again. “Isn’t it customary for the policeman to introduce himself first? Show a badge and that sort of thing? Especially one who doesn’t even bother with a uniform.”

His eyes flashed irritation for a moment, but it passed quickly and
Crystal
could read amusement in them now. He pulled out his badge and held it in front of her face. “Apologies, ma’am. Detective Jack Dunlevy, Wichita Police Department.”

She pretended to inspect the badge, and then leaned back and nodded. “Thank you. I’m Crystal Cartwright. As I said, I live in 3G. I was on my way home from work when I discovered Manny…this way.” She glanced at the body that the uniformed officers were now frisking.

The detective returned his badge to his breast pocket and began writing on his notepad. “Cartwright. A long way from the Ponderosa, aren’t you?”

She lit another cigarette and blew the smoke up toward his face. “Good one. You can bet I’ve never heard that before.”

He smiled at her, and the grin took the rough edge off his features. He was actually quite handsome, with shaggy brown hair that curled around his collar as if overdue for a trim. When he smiled his eyes became a melting chocolate brown and didn’t seem so tired. He had a comforting look about him, which probably came in handy in his line of work.

“So you’re just getting off work?” He made some notes in his notebook.

“And you knew…” he nodded to the corpse that was still being poked and prodded in the doorway of the apartment building.

“Manny,” he repeated and wrote. “Any last name?”

She smiled at him coolly and answered, “I’m sure he had one. I just wouldn’t know it. We weren’t close.”

“Oh, so you and Manny never…” He looked at her sarcastically.