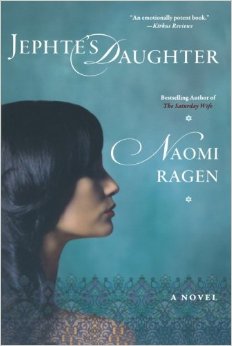 Chains Around the Grass

The Ghost of Hannah Mendes

The Sacrifice of Tamar

Dedicated in gratitude
To my mother, Ada Terlinsky,
And to my husband, Alex,
For their love, inspiration and support

There is something indefinably moving in the relationship an author has with her first book to see print. Perhaps because it finally provides the incontrovertible evidence needed to convince skeptical friends, relatives and acquaintances that your claim of vocation is no idle boast. Or perhaps it is the aura that hangs over all dreams made flesh…

Jephte’s Daughter
was my first published novel. I wrote it in a rush over a year’s time, little realizing in the innocence and passion of bringing to life the tragedy of a local ultra-Orthodox girl, what a storm of controversy would greet it’s birth. In bringing to the attention of the public the whole subject of domestic abuse in Chassidic circles, as well as the rich inner life of ultra-Orthodox women-a subject hardly touched in American Jewish literature of the time-many felt was an unwelcome intrusion into that very private community.

While I appreciated those feelings, I could not agree with them. Literature is the way mankind speaks to each other and to itself. To put any society off-limits to literary exploration, is to deny not only the society’s worth as a source of powerful truths to others, but also to surrender to a self-serving censorship which denies society members the ability to view themselves honestly, and with a clearer perspective towards improvement.

While the decision to explore a world I admire, and love and know so well was not without its pangs of conscience and pitfalls, I am happy to say that today, twelve years later with the re-publication of
Jephte’s Daughter
, the Jewish world has grown to accommodate its reality. The growth of shelters for battered Orthodox Jewish women, guidelines for Orthodox Rabbis in handling domestic abuse, and outspoken Orthodox women’s organizations are proof to me that words are tools for the betterment of the human condition. The writer not only has the right, but the obligation to shine the light of inquiry on that world they know best, whatever the personal price.

And Jephte vowed a vow unto God, and he said: “If You will give the Ammonites completely into my hands then whatever comes forth from the door when I return in peace I shall sacrifice to God.”

…And when Jephte neared home, behold his daughter, his only child, for he had no other son nor daughter, came out to greet him with dancing and with drums. And when he saw her, he ripped his clothes and said: “Alas, my daughter, you’ve undone me and now you are undone. For I have opened my mouth unto the Lord and cannot take it back.”

Dear children, do not be afraid of life. How good is life once you have done something good, once you have been true to the truth within you.

“But where are the women?” the correspondent of the
Australian Daily Star
, newly arrived in Jerusalem to cover the war in Lebanon, asked plaintively. He was a big, nervous man with close-cropped hair and a red face that the burning, late June heat in Ben Gurion Airport bathed in sweat, giving him the look of sautéing meat.

An Israeli reporter in the press section, which had been thoughtfully roped off from the restless, vaguely threatening ocean of milling Hassidim in long beards and sidecurls, looked at his colleague in amusement and pity. He, too, had no idea why no women were there. In fact, he knew less about the mysterious, sequestered lives of the wives and daughters of these men than the Australian did about aborigines. What was the point? They were dull, pale creatures, covered up from head to toe winter and summer, zealously successful in ridding themselves of any taint of womanly allure or feminine promise. He would never have guessed the real answer, which lay in thousands of years of Jewish law, custom, and history as well as in the prejudices of insular little villages in Poland and Lithuania, things of which the Israeli, being a secular Jew, was totally ignorant.

So he answered with dishonest bravado: “Home with the babies, of course.”

Puzzled by the cliché, the questioner nevertheless latched on to his colleague gratefully, with a renewed vigor of interrogation that was essential if he was to make acceptable feature material for Australian readers—tired of the blood and gore of recent war stories—from the arrival of one incredibly wealthy Abraham Ha-Levi from California.

“Are these guys your pope and College of Cardinals, then?” he pressed on. The Israeli laughed too loudly and slapped the Australian on the back. He turned and repeated the remark in Hebrew to some other local reporters, and the laughter exploded from the sweating, bored men in welcome relief. The Hassidim glanced at the group, their eyes narrowing in resentment and contempt at the total ignorance such levity revealed. For most of them, this day and hour was one they would remember all their lives. They would savor each detail and it would become the stuff of lore, passed down from generation to generation in loving, cherished wholeness, embellished finally into myth and allegory.

One of the Israelis put a comradely arm around the Australian, taking pity on him: “Habibi, let me explain it to you. We’ve got Reform Jews, who eat pig and see nothing wrong with it. Conservative Jews, who eat pig and feel guilty about it. Orthodox Jews, who don’t eat pig. And these fellows, who won’t drive ten miles near a pig farm. Do you think we could decide on a pope?”

Ironically, the foreign reporter had really not been that far off the mark. For the somber, expectant men around him really were an elite, the golden diadem of rabbinical scholars and judges, heads of the most prestigious Talmudical academies of Jerusalem. They stood in their heavy black overcoats and wide-brimmed hats—in pious disdain of the unbearable heat—as if waiting in a synagogue on Yom Kippur for the holiest of holy prayers, Kol Nidre, to begin. They waited impatiently, whispering rumors, trying not to look at the tourists, especially the women. They regarded a TV camera crew, jockeying for a position, with outright hostility. Their women and hundreds, even thousands, of Hassidim throughout the world waited at home for a personal word that the miracle, the resurrection, had indeed taken place.

Until just recently, most of them had believed that the Ha-Levi dynasty, founded in 1780 by the saintly Israel Ben Dov Ha-Levi, had perished under Hitler’s murderers and lunatics. And then, two months before, the electrifying news had begun to circulate in the narrow alleyways of Jerusalem and Brooklyn that Abraham Ha-Levi, the youngest of Rabbi Yerachmiel’s four sons, was alive and well in America.

“But tell me, mate, what’s the story here? Who is the guy? Why’s he come? What’s going to happen now?” the Australian pressed, getting a little desperate.

The Israeli, in the briefest of summer shorts and a shirt open to mid-chest, scratched his bare head. He had been sent to cover the spectacle but was as much a puzzled outsider to its meaning as was his questioner, something no Israeli would ever admit. He was rescued from his embarrassment by a sudden, startling change in the crowd, which surged, wave-like, pressing closer to the gates leading out of the air terminal.

Abraham Ha-Levi stepped out of the door leading to the long walkway, hardly aware of the well-wishers and the curious who stared at him from all sides. He walked with a proud straight back, a princely lift of his elegant, graying head, accepting the obeisance like an exiled king. No smile crossed his lined, aristocratic face as he looked over the welcomers, but he nodded slowly, pensively, accepting their possession of him. He took out a monogrammed linen handkerchief and wiped the rivulets of sweat that ran with surprising suddenness down his forehead.

A sea of black-coated men encircled him, bursting out in tears, dance, and song. A few came up close and kissed the corner of his black coat. They shouted blessings and wept. “Praise be to God!” went up, drowning out the noise of the taxis. Tourists reached for their cameras, thrilled at their luck. The reporters smiled, contented. What the hell, with a few good photos, it would fill up space, like pictures of monkeys in refrigerators, or endless expanses of thighs.

One of the faithful motioned toward a taxi, but the last surviving son of Yerachmiel Ha-Levi, sole heir to a two-hundred-year-old Hassidic dynasty long mourned, lifted his hand in a small gesture of disdain and suddenly there was a moment of awed silence as a silver Rolls-Royce pulled up at the curb. As he entered the vehicle, a young boy began to sing psalms in a voice of heart-piercing sweetness and clarity that rose like smoky incense above the heads of the crowd, bringing a moment of silence. Then a shout of joy went up, reverberating into the nearby orange groves. The princely carriage was the final proof that this indeed was a true Ha-Levi. As it pulled away from the curb, the crowd watched, somehow dissatisfied, and began to quietly disperse.

“Christ! Now what the bloody hell was that all about?” the Australian wailed, looking around him frantically for answers.

Sure and Certain Death by Barbara Nadel
The Powder Puff Puzzle by Blanche Sims, Blanche Sims
All For An Angel by Jasmine Black
War of the Mountain Man by William W. Johnstone
The Relationship Coach by Sylvia McDaniel
Wild Star by Catherine Coulter
The Troublemaker Next Door by Marie Harte
First Among Equals by Wildman, Kim; Derry Hogue;
The Pale Criminal by Philip Kerr
Orphan's Blade by Aubrie Dionne