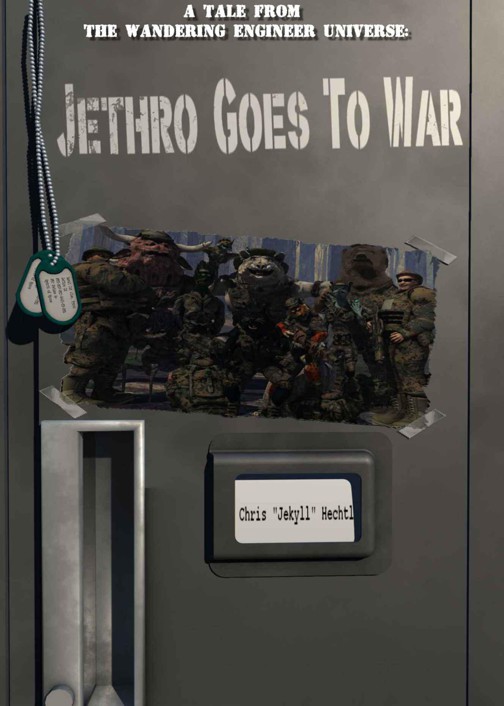 From the universe
of the Wandering Engineer:

This is a work of fiction. All the characters  and events
portrayed in this book are fictional. The exception is Dr. Bowyer who
graciously gave his permission to use his name and his work in this
book. Any resemblance to other people is purely coincidental.

All rights reserved, including the right to reproduce this book and
or portions thereof in any form.

This book is
dedicated to a hard working and much abused Mechmaster. Thanks for
editing for me bud.

The following book takes place in parallel to the events in the last
several chapters of Fool's gold, and events in Destiny's Choice of
the Wandering Engineer Universe. It extends several weeks past the
end of Destiny's Choice in the time line.

“
Your scent
betrays your thoughts young one,” his sire said, balefully
staring at Jethro. Jethro's fur flexed up and down in a wave. His
ears wiggled.

“
Just
thinking,” he growled. It was true, he had been thinking a lot.
Since he had been released from sickbay that morning he had been
doing little else. He looked out at the vista around them then shook
himself.

“
That much is
obvious,” the Matriarch of their clan said, coming up behind
him. “Jet I see you. No sense hiding,” she sniffed the
air, but her eyes locked onto his sire.

Jet's cloak froze
and then his eyes went wide. “Your senses were always better...
keener...”

“
But now that
my sight has returned even more so,” the elder lioness said.
She nodded as she came up to stand with them. The human doctor,
Thornby had repaired the Matriarch's sight a few days before. Her
eyes were no longer milky with cataracts, but a startling gold with
hidden depths he hadn't known.

The humans had done
a lot by them, both for them and against them, despite what had
happened to the gang and it's fallen leader. Jethro put the thought
aside firmly and straightened his shoulders. The Matriarch smiled at
him. Jethro looked away and out to the park below. He tried not to
wrinkle his nose at the sour scent of fear wafting his way. He
glanced in irritation to the humans nearby.

“
They can't
help it young one,” the Matriarch sighed, shaking her gray
tipped tawny head. Her golden eyes reflected off the glass. “After
all, they are only human,” she said with an amused ear flick
and twinkle.

He turned to give
the two nervous looking guards a disdainful sniff. They were wearing
unpowered armor, but he knew that was for show, most modern weapons
could go through it like tissue paper. His eyes narrowed at the sight
of the security robots. The human's were terrified of Neo's like
them, and rightfully so. He and his sire could tear them apart and
they'd never see it coming.

He looked at the
Matriarch. The old lioness wouldn't survive however. Not that he had
any intention of raising a hand in rebellion. Not after signing on.
Hopefully his sire would understand. And maybe, just maybe...

“
We could...”
his sire began. His ears were flat and lips wrinkled in a suppressed
snarl. His entire body was tense, Jethro observed with alarm.
Hopefully his sire wouldn't do anything foolish! Perhaps this wasn't
a good time, Jethro thought with a pang. But there was no helping it,
he had to face it. No matter the cost. He had to report in for
pre-processing soon.

“
We could do
nothing,” the Matriarch answered with a subsonic warning growl.
“Don't be a fool. Either of you. The pride has lost too much as
it is.” She turned, giving them the full force of her gaze. Jet
ducked away, hand paws clenching and unclenching. His claws flexed.
His tail was flashing back and forth. His battered ears were flat
against his skull.

“
A time of
reckoning has befallen our clan. Indeed, the entire system, though
some know it not.” She turned, resting against the guard rail.
Her tail tip twitched. She wasn't kidding, Jethro thought. Anvil had
changed a lot since the person known as Admiral, no,
Fleet
Admiral Irons had
shown up. Now the entire Pyrax system was beginning to change. For
some it was for the better. He had been forced to adjust his attitude
and expectations when he'd faced the man a few days ago.

Irons was an
imposing man. He'd been irrational at the time, still in shock and
adjusting to the changed situation. Irons had been a shock, but
Forth, Major Forth had been a revelation. One he welcomed
wholeheartedly. He'd jumped at the invitation the Major had extended.

“
Before us
paths are unfolding that were closed before. They blossom like a
forgotten flower. Some paths lead back into the light. To a future we
had thought was lost. A better future for our kits. Some lead to
unexpected things. Things we cannot yet see or avoid.”

“
So we should
stay on the paths we know,” Jet grumbled.

The Matriarch's
nostrils dilated for a moment. “By no means. We shouldn't be
closed to the future just because it is unknown to us. But we should
be wary of trying to follow old paths that look inviting but are now
traps.” The Matriarch turned to him. “Dead ends,”
she said quietly. He glanced at her and then rested his gaze on his
son.

“
And yet.
There is another,” the elderly lioness said, giving Jethro a
long look. “One your ancestors had before you. One you had
yourself dreamed of as a kit.” She looked up to Jet. “The
Federation Marines.”

“
A catnip pipe
dream, a dream for kits best left forgotten,” Jet snorted.
“None exist. None shall ever exist.” He shook his head.
He groomed his shoulder with his long tongue disdainfully.

“
But they do,”
Jethro said in a rush, excited. His father paused to look up to him.
His eyes locked on his for a moment before Jethro looked away
embarrassed at his lack of control. His father was always on him
about control, keeping a constant control of his emotions. Like a
Terran samurai.

“
The cub tells
the truth Jet. A marine came to see us in sickbay. A Major Forth. In
full powered combat armor,” the Matriarch confirmed.

Jethro chirruped
agreement. His head bobbed an excited nod, eyes wide, ears forward
and alert. “It was incredible! Like the descriptions but
different! The armor stank of hydraulics and ozone...” His
nostril's dilated in memory. His hands spread as he described the
armor.

“
But it was
none the less real. Even I scented it.” The Matriarch gave a
closed lip smile and a hand pat to the cub. He glanced at her in
relief, glad of her reassuring presence. “The major has opened
one of the paths I mentioned.”

“
The marines?”
Jet asked. He flicked his ears and then he stretched upward. Claws
came out as he stretched, sinking into the deck and support column he
had decided to use as a convenient scratching post. They winced a
little at the scritching sound his claws made as they dug into the
steel.

“
Exactly. I
checked the net. They are reforming the marines. With augmentation!”
Jethro bounced. His sire growled giving him a quelling look.

Jethro's fur fluffed
and then flattened, his ears went back as he sulked.

“
You think
they will take the likes of you?” Jet snarled after a moment.

“
Why not?”
A voice behind them asked. The trio turned to the younger guard.
“Seriously? He's built for it. Recon at least,” he waved
a hand to indicate the younger panther. “Planet hopping. I'd
say you'd do better there than running around in a station,”
the human kid said. He shrugged. “I'm going in as well.”

The Matriarch
snorted as she eyed the young man and then nodded. Jet stared at the
guard until he gulped. Nervously he fingered the needler he held at
arms.

“
The shadows
are our way. The way of the panther. Since we came to Pyrax. There is
no other path,” Jet snarled after a moment.

“
But...”
Jethro protested, eyes wide. This wasn't going the way he wanted. Not
at all. He looked into the ever widening crevasse forming between him
and his Sire and could see no way to stop it from widening into a
chasm. He felt lost and confused.

“
Your son is
trying to tell you he has already joined the marines shadow warrior
Jet,” the Matriarch said softly. Jet whirled, glaring from one
to the other. Jethro stood straight and stared into his father's
scarred face.

His father's brows
knit as his ears went flat once more. He didn't have a choice now, he
had to face his father's wrath and see where it led.

“
Then he is no
cub of mine,” Jet snarled teeth bared and stalked off. The
guards followed.

The Matriarch sighed
softly at the bitter crestfallen look on the cub's face. She slumped
a little, pulling her hands into the sleeves of her kimono. She
closed her eyes, somehow wishing for her blindness to return.
Anything to get away from the sight of hurt and disappointment on the
young one's face.

“
He will
change his mind. The fool. He jumps without looking,” she
chirred. She shook her head once more and opened her eyes. “Know
this young one, no matter what happens to him, and to the clan I, we
are proud of you and those who will join you.” She patted his
arm. He nodded, swallowing his rage and hurt.

“
That's right
cub, now, let’s go see what mischief the other cubs have gotten
into in our absence,” she said. “Don't tell them this but
the doctor's work has made me feel twenty years younger!” She
chuckled softly at his surprised expression. She stretched a little
and then walked to the door. Her tail bobbed with each step and then
made a come hither motion. “Coming?” she asked.

“
Of course
grandam.” He gathered himself and followed.

In the anteroom the
clan shared with other refugees the clan mothers were hotly debating.
The paths as usual. He thought, watching and flicking his ears as
they, the adults of the pride tried to decide on what to do. Some
like himself had already chosen.

Three of the younger
kits were already enrolled in school. One was taking night courses
while working as a grounds keeper in one of the restored parks at the
college.