Read Jim Morgan and the King of Thieves Online

Jim Morgan and the King of Thieves 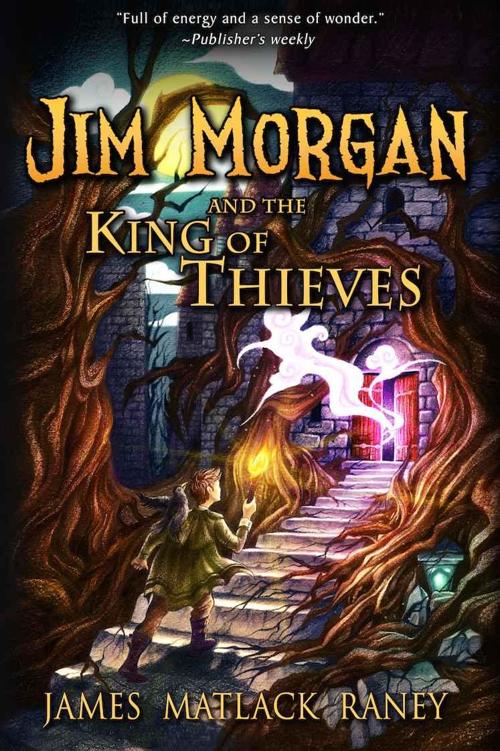 4
A Conversation in the Kitchen

6
Flight through the Forest

7
Eyes in the Night

11
The King of Thieves

23
The Captain and the Constable

27
Jim Morgan and the King of Thieves

30
The Orchard of Bronze

31
A Standoff in the Street

32
The Vault of Treasures

34
Escape to the Sea

nce there lived a boy named James Francis Morgan, who was born in a mansion that was in truth very nearly a castle on the southern coast of England not far from the town of Rye. These were the days when explorers and naval officers, and even pirates who sailed the high seas, were the greatest of all heroes, especially to young boys like James, whose father, the Lord Lindsay Morgan, happened to be one of the most famous of all of the captains in His Majesty’s navy. So famous was he that it was even rumored the King of England was a personal friend.

Now, when he was very young, James was a wild sort of boy, running up and down the beach with his little wooden boat and little wooden sword, waging imaginary battles with pirates and scalawags so epic they could only exist in a young boy’s mind. Day after day he
ran across the dunes in his bare feet, until the salty smell of the sea dwelt in his skin, and the ocean wind lived in every curl of hair on his head.

When Jim was still too young to fully remember those spectacular adventures, his father left to sail the seas on a mysterious voyage. Though far-fetched rumors swirled about all of England, no one knew quite where the valiant captain sailed or why. But Lord Morgan said he would return in five years, no more and no less. During this time he left young James in the care his Great Aunt, Margarita Morgan - or as she insisted on being called, Dame Margarita Morgan.

Dame Morgan, who was as round and pale as the full moon itself, wearing an enormous wig with platinum blonde curls to cover her gray, hated the ocean and anything to do with it. The very day James’s father left on his long voyage, Dame Margarita forbade James to continue his wild behavior and kept him bottled up in the house instead. She replaced his wooden ships with Latin lessons, his wooden swords with harpsichord practice, and his bare feet and wild hair with the best-dressed fashions for growing lords from the finest tailors in Paris, France. She never let him out to play with boys his own age, but kept him up all hours eating chocolates with her, listening to the latest gossip from London, and teaching him who was worth talking to and who was not.

In short, she fashioned him into a little version of herself…which happened to be a spoiled and rotten brat.

“Keep up, will you?” James Morgan snapped at the string of servants following him down the hill to the Morgan Manor Stables. “It simply won’t do to have me looking tousle-haired, malnourished, and dressed in the dilapidated rags of a pauper when my father arrives, will it?”

“Of course not, Master James,” replied Molly the housemaid breathlessly, nearly tumbling down the hill as she attempted to walk and brush James’s curls simultaneously.

“Almost finished, sire,” mumbled Melvin the tailor, needles clasped in his pursed lips, scurrying on all fours like an overly-plump squirrel, desperately adjusting the tails on James’s new riding coat as he went.

Last came George, the cook, (the only original house cook still on staff – the other four having been sacked by James and Aunt Margarita for one offense or another) who deigned not speak at all, or even to breathe really. Instead he focused on precariously spooning custard into James’s mouth without spilling a drop on the young master’s new riding jacket.

James often marched about the manor grounds with just such an entourage in tow from morning till night. However, this morning was a special morning, the morning when the Lord Morgan himself was set to arrive home from his long journey across the sea, and James had something special planned for the occasion.

The moment he reached the stable doors, James’s need for his train evaporated. He smacked Molly’s brush-wielding hand aside, snatched his hat from Melvin, fitting it dashingly upon his head, and knocked the last spoonful of George’s custard away from his mouth.

“That will be all,” James sighed, as though such a walk had been exhausting for an eleven year-old boy. “You three may go back to help the others prepare for my father’s return party – except for you.” James turned and narrowed his eyes on George, the custard meant for James’s mouth dripping down the poor cook’s face. “That custard was not nearly up to snuff! I believe I shall have you sacked. Good day.” Then James turned, a rather nasty smile stretched over his face, and strode through the stable doors, leaving the dismayed George in tears and Molly and Melvin shaking their heads in consolation.

“Jeremiah, prepare Destroyer for me!” James announced as he strutted into the stables. Jeremiah was the Morgan’s lanky horse master and stable caretaker, and Destroyer was James’s steed. Actually, to call Destroyer a steed was perhaps a bit of stretch. In fact, to even call her a horse was bending the truth. Destroyer was a pony who was even a bit small as far as ponies go and was the most docile creature in the
stables, preferring a good nibble of oats and a roll in the grass over any raiding or galloping. But from the time Aunt Margarita had let him have the pony, James had called her Destroyer, his war charger, forever envisioning himself riding into glorious battle on her back.

Lucy Crown by Irwin Shaw
When the Emperor Was Divine by Julie Otsuka
A Field Guide to Awkward Silences by Alexandra Petri
Gone by Lisa McMann
Polychrome by Joanna Jodelka
The Girl of the Golden West by Giacomo Puccini, David Belasco
The Battle of the Red Hot Pepper Weenies by David Lubar
Octavia's Choice [The Klawinken 2] (Siren Publishing Classic) by Natalie Rosewood
The Wedding Gift by Marlen Suyapa Bodden
Toma (The Dark Shadows Book 2) by Ariel Marie