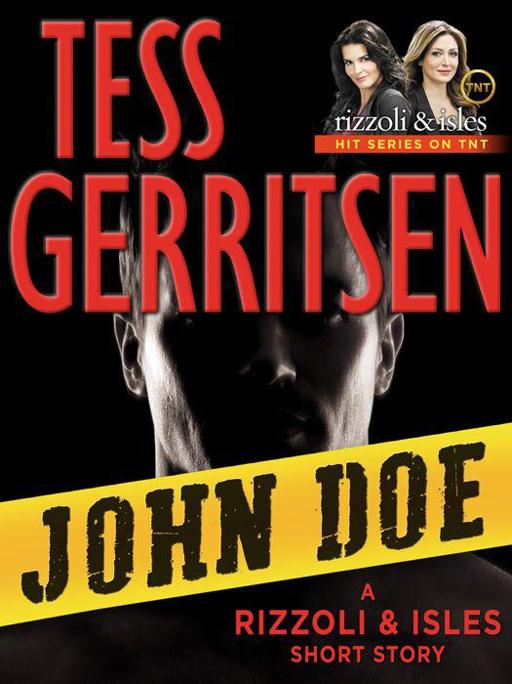 John Doe: A Rizzoli & Isles Short Story
is a work of fiction. Names, characters, places, and incidents are the products of the author’s imagination or are used fictitiously. Any resemblance to actual events, locales, or persons, living or dead, is entirely coincidental.

Excerpt from
Last to Die
copyright © 2012 by Tess Gerritsen

BALLANTINE and colophon are registered trademarks of Random House, Inc.

Excerpt from
Last to Die

Dr. Maura Isles did not enjoy cocktail parties. Circulating in a room filled with strangers was her idea of an excruciating evening, yet here she was, glass of champagne in hand, standing beneath
Tyrannosaurus rex
. Dinosaur bones did not expect her to smile and come up with small talk, something Maura was singularly bad at. Sheltered in the undemanding company of
T. rex
, she read the informational plaque for the tenth time, glad that for once she wasn’t competing with the hordes of children who always gathered at the feet of dinosaurs. Tonight was an adults-only affair, a formal reception to thank the donors to Boston’s Museum of Science, and as a member of the benefit committee, Maura could hardly slip away before the speeches started. She smiled stoically and sipped champagne as men in tuxedos and women in evening gowns glided past, chatting and crowd-hopping with an ease that Maura had never acquired.

Maura turned to see an attractive dark-haired man smiling at her. Although she was wearing four-inch high heels, he was taller than her, fit and trim in a well-tailored tuxedo. She glanced at his name tag and saw his name was Eli Kilgour. The gold dot pasted above his name told her Mr. Kilgour was a high-level donor to the museum.

“I see you’re on the benefit committee,” he said, reading her name tag, just as she had read his. “Excellent event tonight, Dr. Isles.”

She smiled back. “I can’t take any credit. All I did was write a check and lend my name to the cause.” She shook his hand. “Thank you for
your
generous donation to the museum. We need to get every kid in town fired up about science.”

“And that title
Doctor
I see in front of your name,” he said, pointing to her tag. “Would that be MD or PhD?”

“MD. I’m a forensic pathologist. And you?”

He gave a modest shrug. “Nothing nearly as impressive. I suppose my full-time job is supporting causes that matter to me.”

Which explained the gold dot on his name tag. He didn’t have an occupation because he obviously had money.

“And which causes do matter to you?” she asked.

“Inspiring young scientists, for one. Which is why we’re both here tonight, wearing our dancing shoes.”

“Dancing?” She winced. “More like limping. These are my two-hour shoes.”

He looked down at her high heels. “What happens after two hours?”

“Either I kick them off, or someone has to carry me home.”

She laughed, surprised to find herself flirting with an attractive stranger, and she quickly confirmed that he wore no wedding ring. The evening had turned interesting: The champagne tasted more delicious, and a pleasant warmth flushed her cheeks.

“So are you alone here tonight?” he asked, glancing around the room, searching for her escort.

She sighed. “Unfortunately, no. You?”

“Unless you count my mother, there is no Mrs. Kilgour. Which turns out to be a good thing tonight, because I can enjoy a guilt-free chat with a beautiful woman in a stunning gown.”

“That,” she said with a smile, “sounds like a line you’ve used before.”

“But tonight I actually
mean
it.” He looked down at her empty champagne glass. “Let me refill that for you. If you promise not to disappear.”

She handed him the glass. “Thanks for saving me the pain of hobbling to the bar.”

“Back in a flash. Tell
T. rex
to behave himself.”

Off he went with her champagne glass, striding with the confidence of a man who knew his way among the tuxedoed crowd. Just as she lost sight of him, the PA system hummed to life.

“Good evening, ladies and gentlemen! I’m George Gilman, chairman of the benefit committee. I’m delighted to see so many people here who care about this museum and all the ways it enriches our city, inspires our children, and awakens our wonder in science …”

Maura’s two-hour shoes had just about reached their limit. She leaned against a pillar, trying to take the pressure off her numb toes, as George Gilman finished his introductions. The museum director took the microphone and began to talk about their mission as educators and scientists, all things Maura deeply believed in. Her eyes stayed on the speaker, but she scarcely registered his words because she was distracted by the buzz of the crowd, the flushing of her own skin. And by the attentions of a certain stranger.

Suddenly he was back beside her. “Here you go,” he whispered, placing a full champagne glass in her hand. “What did I miss?”

“He’s been a very good boy,” she said as she sipped.

“Have you eaten dinner?”

“The canapés were a meal in themselves.”

“I arrived too late to sample any. So …”

“When the speeches are over, let me take you someplace for dessert.”

He was staring at her as if he thought
she
were dessert. The champagne made her feel bold, even reckless, but something she glimpsed in his eyes made her hesitate. She took another sip, giving herself a moment to weigh his invitation.

“True. But I have the special gold dot,” he said, tapping his name tag. “Does that count for something?”

Now she had to smile. If ever there was a place to meet a respectable man, it would be a Museum of Science reception. Whatever she’d earlier glimpsed in his eyes, whatever had pinged some internal alarm, was no longer visible.

“After the speeches,” she said.

“And then I want to hear more about you. What else you do besides supporting causes.”

“Over dessert. And I know just the place. A French café, right in this neighborhood. Strawberry tarts as good as any in Paris. And it’s close enough to walk to.”

“Ouch.” She looked down at her shoes. “Don’t even say that word.”

“Even the pumpkin sounds good.”

Now the evening’s featured speaker took the microphone. A distinguished climate scientist from MIT. Maura drained her champagne to steel herself for the doom-and-gloom lecture sure to come. Shrinking polar ice caps and disappearing phytoplankton. Even though she wore only a silk halter gown, the room felt warm and suddenly airless.

“… and how can we as a country sensibly respond to these global challenges, given our schools’ latest test scores in science?”

Maura looked at the other attendees. Was no one else feeling overheated? All around her were women in jewel-colored gowns, appearing cool and collected.

She felt a steadying hand on her arm, and looked up into Eli’s face.

He took her empty champagne glass and set it on a nearby tray. “I think you need some air,” he said.

“… and that is where we find ourselves today, in a nation rapidly being eclipsed by scientific powerhouses now rising in Asia, where …”

The sun burned through her eyelids. Maura turned her head, trying to escape the glare, but it shone down on her face like a heat lamp, hot enough to scorch her skin. Her mouth was dry, so dry, and her head hurt. And the damn phone kept ringing and ringing.

She opened her eyes and squinted at the sunlight blazing through the living room window.
Why am I not in bed?
She struggled to focus on her surroundings and saw her coffee table, the Persian rug, the bookcase. Everything where it usually was.
Except for me. How did I end up falling asleep on the sofa?

Groaning, she sat up and immediately had to drop her head as the room seemed to rock. Doubled over, her face resting in her hands, she realized she was still wearing her evening gown from the Museum of Science reception. The silk was thoroughly wrinkled from being slept in, and one high-heeled shoe was lying under the coffee table. Where the other shoe was, she could not remember.

She could not remember a lot of things. How she’d gotten home. How she’d made it through her front door.

Slowly she straightened again, and this time the room stayed steady. She spotted her purse on the floor, with her keys lying beside it. I must have driven myself home, she thought. Unlocked my front door, and collapsed onto the sofa.

Why can’t I remember any of it?

She stood up, reeling like a drunken woman, and stumbled down the hall into the kitchen. There she drank two full glasses of water, gulping it so greedily it dribbled down her chin and splattered her silk dress. She didn’t care. Thirst quenched at last, she propped herself against the countertop, feeling steadier. Stronger. Her head still throbbed, but she was awake enough now to feel the first prickles of fear. The kitchen clock read eleven thirty-five. It was a Sunday, but even on weekends she never slept this late.

What happened to me last night? Why can’t I remember?

She looked down at her dress. Except for the wrinkled fabric and the fresh water stains, it appeared intact. She was still wearing her pantyhose, although a fat run had streaked its way up her left stocking. She hadn’t been robbed, since her purse and keys were in the …

She hurried back to the living room and scooped up her evening bag. Inside it, she found her business card case, lipstick, and wallet. The wallet was unsnapped. With a rising sense of panic she flipped it open and was relieved to see all her credit cards; only her driver’s license was missing. No, there it was, lying loose at the bottom of the purse.

So Me by Norton, Graham
Law of Survival by Kristine Smith
The Lampo Circus by Adornetto, Alexandra
Alaska by James A. Michener
We Are Pirates: A Novel by Daniel Handler
The Floating Body by Kel Richards
Bad Blood by Linda Fairstein
Payback by J. Robert Kennedy
Blood for Ink (The Scarlet Plumiere Series #1) by Muir, L.L.
Fallout by Sadie Jones