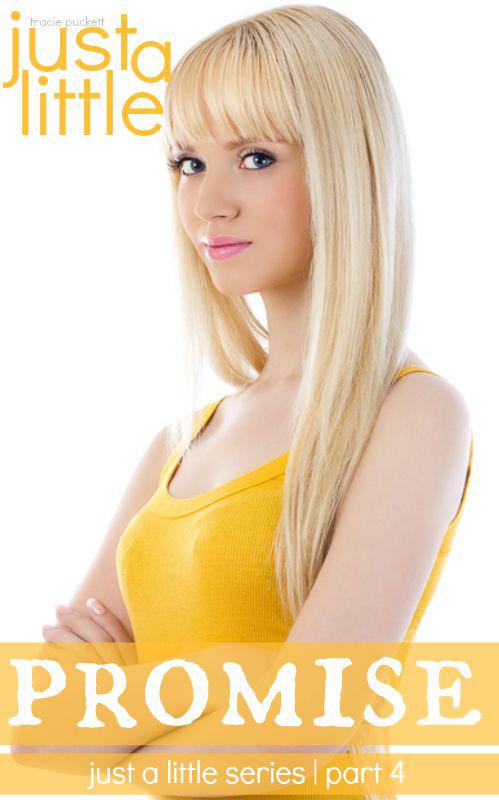 These stories are works of fiction.
Names, characters, places
, and incidents are either products of the author's imagination or used fictitiously. Any resemblance to actual events, locales, or persons—living or dead—is entirely coincidental.

“I’m not a villain,” Charlie grumbled, throwing his coffee mug into the sink a little too hard. He turned to my cousin for confirmation.
“Right?”

“Leave me outta this, Dad,” Matt said, snapp
ing the lid on a piece of Tupperware
. He secured our leftovers in the refrigerator and turned back to the counter, never once looking at me or Charlie.

I
sat at the table, pushing my asparagus around with the fork. Charlie, who’d cleaned his plate nearly fifteen minutes ago, was now leaning agai
nst the counter.

“Julie,” Charlie said, dropping his head. “I’m sorry, but the answer is no.”

“No,” he said, refusing to hear my argume
nt before I had time to make
it
.

“Why?” I asked,
prompting him to give me an explanation
(though I already knew
exactly
why).

He didn’t think I was privy to the
conversation he’d had with
Luke last month, but because of my super ability to eavesdrop
at any given moment
, I knew all I needed to.
And
Charlie had been bending over backward to keep me from leaving the house alone. He wouldn’t let me step foot near the police station. I was on
an imaginary
leash—and he refused to tell me why.

If I hadn’t heard the conversation with my own two ears—if I didn’t know what Luke had admitted to my uncle—I’d be irate by
Charlie’s overbearing
behavior
. But, in a way—a very
little
way—I found some humor in it. Charlie didn’t want me within a one-mile radius of Luke… and he made sure he did everything he had to do to keep us apart.

“It’s coffee!” I yelled, throwing my arms in the air. “O
ne cup of coffee with a friend—”

“Who?” he asked, convinced he already knew the answer.

“It does if you want to leave this house,” he said.
“
Who
?”
I crossed my arms and slumped further
in
the chair. “
Is it a
friend from school?”

“
Ugh!
What’s going on here?” I asked. “
You’ve been keeping me under a
microscope
for weeks
! You don’t have to know every minute detail of what’s going on in my life.” I looked at my cousin. “Why don’t you hound Matt every time he asks
to go out
?”

“You don’t trust me?” I asked, straightening back up. I threaded my fingers together and rested my elbows on the table. “Charlie, I’ve never given you a reason to think I can’t be trusted. When I first moved here, you let me do anything and
everything
I wanted to do—no questions asked. What’s changed?”

He knitted his eyebrows together
. He knew I was right; I hadn’t done anything—not once—to make him think I was untrustworthy. But the fear of me sneaking away to see Luke was more than he could
swallow
.

“For one,” he said, combing his fingers through his mustache
, “y
ou never used to keep secrets.”

“Who are
you
having
coffee with?”

“Grace Reibeck,” I said, seeing
Matt
perk up
with
sudden interest in the
direction the
conversation
had taken
.
He knew as well as I did that mentioning the name
Reibeck
meant I was
dancing on dangerous ground
.

“What business do you have with Grace?” Charlie asked, folding his arms across his chest.

“It’s two-fold, really,” I said, working out my explanation just as I’d rehearsed it earlier in my room. “One, she and Lonnie own the only flower shop in town.”

“And that’s important because….?”

“I joined the Oakland
Celebration
Committee last month,” I said. “After designing the Fall Ball, I realized I have a bit of
a
knack for party planning
and
party execution. With some time, a budget, and a place to work, I can come up with just about anything for any occasion.”

“I wanted to get involved,” I said. “You’re always preaching about how important it is for kids to stay active in the community. Take your job shadowing program, for instance. You wanted us to figure out what we wanted to do
post-graduation
. You wanted us to be proactive. Well, I’m being proactive.
I found something I like doing. I’m sticking to my guns.
The Fall Ball was great, but it was small potatoes compared to what I’m doing now.”

“
Managing
the Oakland
Holiday
Parade,” I said. “
Which brings me back to Grace.
She’s going to cut me a deal on flowers for the floats.
I need flowers, and lots of ‘em. Grace is my go-to gal.
”

“This isn’t the Rose Bowl, for God’s sake,” he mumbled, burying his head in the palm of his hands. “What’s the other reason?”

“You said you want
ed
to meet with Grace for two reasons,” he said. “What’s the other?”

“Right!”
I said. “Glad you asked. She’s
the middle man between me and the Grand Marshal.”

“What’s that now?” he asked so quickly that his words sounded like one long slur.

“The
Grand M
arshal,” I said. “The parade
honoree…they r
ide through the line first
, leading the rest of the floats along the route
.
” Charlie’s mouth hung
open
, so I elaborated
. “The Grand M
arshal is an
outstanding member of the community that is deserving of an award or recognition
of some kind
—”

“Luke,” I said,
watching his face turn a dark shade of crimson.

It was strange to hear
his
name cross Charlie’s lips. I’d gotten so used to hearing
him
, Matt, and everyone else we knew call him
Trigger
. To hear Charlie refer to him
by name
… well, it told me just how quickly
the dynamic of their relationship had changed. It was no longer rainbows
and
butterflies… or, beer and poker nights
. Their friendship—or what they had of one—ceased to exist the night Luke opened his heart to my uncle.

“He was nominated by the committee and voted into the posi
tion last week,” I said. “I wanted to do a
flashback
kinda thing with his float—old pictures, mementos from his past… really celebrate who he is. Grace is
gonna
try to dig some of that up for me. When it comes right down to it, we just w
ant to give him the best float possible.
After all, it
is
Luke.
”

“Aren’t they s’pose to just ride in on a car or something?” Charlie asked, trying to keep his voice calm and unsuspecting.
“Why a float?”

“
Change of management, Charlie.
We’re doing things
different this year,” I said. “
Grace is
my right-hand man, and she agrees… it’s time for change
.
And
,” I said, looking at my watch. “S
he’ll be here any second to pick me up, so if you’re not going to let me go… you’ll have to tell her yourself. We’ve had these plans for weeks. She won’t be happy if I cancel.
”

Right on cue, the doorbell rang. We all knew it was Grace, but the real question was whether or not Charlie would ever let me walk out the door with her.

“Julie,” Charlie said as I jumped from my chair and sprinted for the door.

I turned back and met his stare.

“Just you and Grace?”
I nodded, and it seemed to ease his mind. “One hour. I want you back here by sundown.”

“Great!” I said, wearing a genuine smile. “I couldn’t stay out long, anyway. Luke’ll be here at eight to he
lp me pull together the
proposal for the parade route. See you in a bit.”

I turned on my heel just as Charlie said, “Whoa, whoa, whoa. Get back here.”

I stopped and turned back yet again.

“
Yes
?
” I asked, as melodramatically
as before.

“What did you just say?”

“I couldn’t stay out long anyway,” I said, acting as though I didn’t know what he was aiming for.

“Oh,” I said, nodding. “Derek will be here at eight to help pull together the route proposal.”

“Did I?” I asked, looking innocently between Matt and Charlie.
“Silly me.
I meant
Derek
.” I slapped myself on the forehead. “I guess with all this
G
rand
M
arshal business I’ve j
ust had Luke on the brain 24/7.
”

Charlie groaned
as I turned out
.

I felt borderline evil
mess
ing
with Charlie, but I
couldn’t help it
; a
ny chance to see him squirm. I was tired of his new approach to parenting.
I wanted off
the
leash
.
I
planned to keep applying pressur
e; I’d make him squeal eventually. He was
going
to tell me
why he was so hell-bent on keeping me away from Luke.