Just in Time: Portals of Time 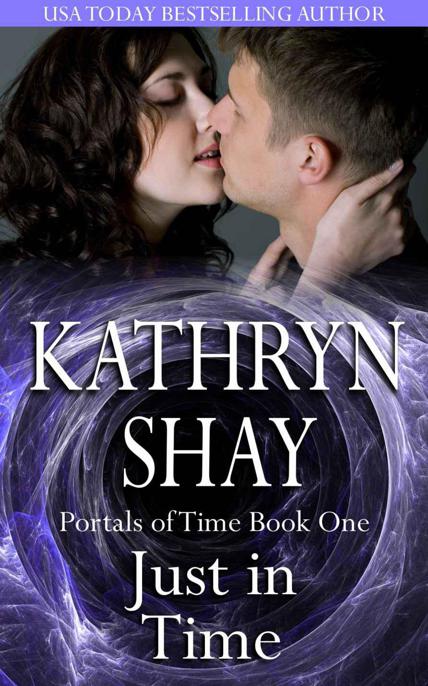 THE AIR IN
Dr. Jess Cromwell’s office stirred and the temperature in the room spiked. Sparks shot out from nowhere as the entire space crackled. And then, in front of him, on the old braided rug, little lights began to take shape. It was like molecules coming together. Right before his eyes, a human form materialized.

Jess blinked, thinking he must be going mad. But no, he
saw
this. Really saw it. Uh-oh. Not it. Them. After the first body, a second and third formed; three women had appeared, literally, in his Vista Institute office! The scene could have come out of a
Star Trek episode
where the transporter beamed people from one place to another. For an instant, the three of them stood stiffly, then one toppled to the ground, then the second, then the third.

“Oh, good Lord,” he said as he rushed to them. Mirage or no mirage, he couldn’t stand by and watch three people faint and do nothing.

Disentangling the women from each other—they were solid forms all right—he stretched them out flat on the floor. They were breathing, so he took their pulses first. Fast, really fast, but steady. There was no way to loosen their clothing; he could see no zippers or Velcro on their dull, gray tunics made of some light material, with trousers to match. He’d whipped out his cell phone to call the ambulance when one of them roused. She was the tallest, most muscular and toned. When her eyes opened, they were a startling, pure green. She blinked, like a cat watching a human.

“Greetings,” she said in a sleep-slurred voice.

Man, he
was
losing it. The woman had recited an alien’s line straight out of some science fiction movie.

When she sat up, she moaned, squinted and massaged her temples. “You are Dr. Jess Cromwell.” It wasn’t a question.

Frowning, she scanned the room then nodded. “This is the desired location. I recognize it from the computeller screen.”

Just last week,
Science Today,
a magazine in which Jess had published several articles on his research, had run a photo shoot of him, and they’d included pictures of him in his office. The feature had been in print and online. Because he’d been getting quasi-threatening emails, his cop brother, Luke, had had a fit about the publicity.

At his hesitation, she asked, “Are these not the correct coordinates? In the year 2014?”

Again, she nodded, just as the second woman shifted on the rug. This one came awake fast and bolted to a sitting position. When she opened her eyes, she glanced at her companions. “We made it, Dorian.”

This
Alisha
frowned. “As do I. Ignore it.” She faced Jess. “Cromwell, right?”

He shook his head. “I’m hallucinating. Helen said I would if I didn’t stop working so hard.”

The bigger one, Dorian, looked past her friend with a worried expression. “Celeste is still unconscious.”

Alisha came to her feet shakily and swayed. Jess reached out just in time to catch her. Once again, she
felt
real enough. “Steady there.”

Frowning, she stared at his hand on her arm as if she wasn’t accustomed to being touched. Then she bent over her friend who was still out cold. “I wondered if she could make the jump, if she had enough stamina.” Sticking her hand into some sort of sack she carried—all three had similar black pouches looped around their necks—Alisha drew out what looked like a small tablet, but thicker. The device blinked and buzzed as she ran it above the prone woman’s body. “Vital signs normal. Brain activity erratic.”

Dorian nodded. “They always are on her.”

“No, the central Multimed examined her before we left so I’d have a baseline. These readings are different.”

“I hope she’s not too ill from temporal displacement. The jump would affect her the most.”

Jess said, “I can call nine-one-one.”

“We don’t need that.” Alisha turned to her cohort. “Help me get Celeste to the sitting conformer.” Though their movements were stiff, the two women picked up the unconscious one and carried her to the sofa as if she weighed nothing.

Dorian touched the cushion of the old leather couch that had once graced his family room and he sometimes slept on if he worked all night. “The furniture is hard. I forgot it would be.” They placed the unconscious woman—Celeste—on the sofa. “Uncomfortable.”

As if to underscore her words, Celeste shifted and moaned, like Dorian had.

Jess took a long look at them. If he was losing his marbles, he was going out smiling. The three of them were knockouts. Very fit. Thick manes of hair, short but beautiful. Nice eyes, nice features…nice everything. Again, Jess shook his head, blinked twice, but the women didn’t go away. For God’s sake, what was happening here? “Where did you come from? And how did you materialize in my office?”

Alisha stood beside Dorian. “Perhaps you should sit down for this.”

He watched her for a minute, then went to his industrial-steel desk, pulled out the chair and sat.

“Why would we do him physical harm?” Dorian asked Alisha. “We’re here to protect him.”

This had something to do with the threats? Or was Luke jerking his chain? Jess might have believed that, except the women had formed out of nowhere, right before his eyes. Even his excellent cop brother couldn’t pull off that little trick. No one could and that included assassins. So he was probably safe.

Trying to stay calm, he asked, “How did you get here?”

“We traveled through a portal”—Alisha pulled out another thick tablet look-alike—“with this device. We’re from the future, Dr. Cromwell.”

“This isn’t some version of your twenty-first century humor. I assure you, we came from 2514.”

Dorian straightened her shoulders. “Because, Dr. Cromwell, your research to stop carbon emissions which pollute the air may prevent the world’s end. However, at some point in the next two of what you call months, someone is going to kill you. We’ve come to prevent your death from occurring.”

BECAUSE OF THE
hammerjack pounding in her head, her sore musculature and the dizziness, Dorian breathed in deeply. She was weakened from the jump, which they’d anticipated would happen, but she wasn’t used to even a modicum of corporeal frailty. As head of the Institute for Physical Stamina, her life task was to keep the members of society at the apex of fitness.

Summoning her strength, she stepped closer to the man seated next to his work space. He looked different in real life than on the chips, where they’d viewed his image. He was smaller than she’d pictured and he had interesting lines fanning out from his eyes, though his age was close to hers. Men of this time period lost their hair and his was gone, which was truly odd to witness. And—she sniffed—his smell was unlike the males she’d joined with.

“Dr. Cromwell, I’m Dorian Masters. I assure you we’re telling the truth. It’s why we teleportaled here, into your work space. We wanted you to see us arrive so that we could convince you who we are and when we come from.” She held up her personal computeller. “There’s data on this machine that will prove our veracity—you will indeed be killed in a relatively short period of time.”

All three glanced across the room, where Celeste had roused and spoken. Her face was pale, her blue eyes bloodshot and she pressed her palm into her stomach. Dorian hoped she didn’t vomit.

Closing the distance between them, Alisha scanned Celeste with the first handheld device. “Brain’s still irregular, but physically, she’s fine.”

“I wouldn’t exactly say that.” When Celeste stood, she winced and wobbled a bit. After closing her eyes to regain her balance, she walked over to Cromwell. Her body was curvier than the others. “Hello, Dr. Cromwell.”

“You’ve got your stories straight, at least.”

“He doesn’t believe us.” Dorian didn’t blame him.

After a brief hesitation, Celeste picked up Cromwell’s hand. She shivered. As a sensitive, she could feel and sometimes take on people’s emotions. “He doesn’t know what to believe. He’s uneasy and frightened. We must show him the proof we carry.”

Alisha was already setting up her computeller. She placed it on the surface of the work space. “Enlarge screen.”

Dr. Cromwell was wide-eyed as the screen expanded to twenty-by-twenty. He said, “Holy shit.”

“Crude expletive combined with a religious term, which makes no sense,” Alisha commented. Then she ordered, “Reveal the fate of the inhabitants in 2514.”

Buzz. Whir. Click. Then the machine announced, “The world will end seventy-five years from the specified date.”

Cromwell’s skin was now ashen. “And you know this how?”

“Society has the ability to project into the future, as well as backtrack into the past. Projection was approved for scientific purposes in the twenty-fourth century, but only by the Guardians and under strict regulations.”

“Who are the Guardians?” Jess asked.

“What did you find out when you went forward?”

The computer continued, “In our most recent experiments, we discovered some catastrophic facts. As of seventy-five yearlings after the date we traveled from, we hit a wall. No projection was possible beyond that.”

“Because, as was said, the world ends. Travelers were able to transport to the future right up until then. However, the events of the previous decade are cloudy. Test jumpers arrived but could not move beyond the portal. They could see only outlines, hear spoken language, no more than that. But in 2589, the researchers could not find even a portal that opens. The conclusion is the future society simply ceases to exist.”

Stunned silence from the doctor.

Alisha’s brows furrowed. “I helped determine this, Dr. Cromwell. I’m head of the Institute for Archeology which, for obvious reasons, works closely with the Institute of Temporal Studies on backtracking. I can assure you that our generation was the last.”

Alisha continued, “This explains why we’ve decided to come back in time and alter certain events in hopes of preventing annihilation.”

“And exactly what do I do to prevent this?”

“It will be best to show you.” To the computer she ordered, “Activate program on Dr. Jess Cromwell.”

“All data?” the computeller asked.

They had hoped Cromwell’s scientific curiosity would make him amenable, and it seemed to. He rolled his chair closer to the computeller, his frown showing more of his eye lines. Absently, Dorian touched her cheek. She was glad for the advancements in aging that scientists of her time period had made, then chided herself for being vain when their mission was so serious.

The computeller proceeded to track Jess Cromwell’s life in text and videos. His schooling, his friends, his relationship with Helen Harmon, their ritualized cohabitation, his education.

Throughout it all, Cromwell’s frown grew more intense, and he started to sweat, something else Dorian had never experienced because of their temperature-controlled air. It was fascinating to watch tiny beads of water appear on his brow. “Anyone could know this about me from the Internet,” he finally said.

They were aware of the Internet and, now that they were in this time period, would use the network to create backgrounds for themselves once they got settled.