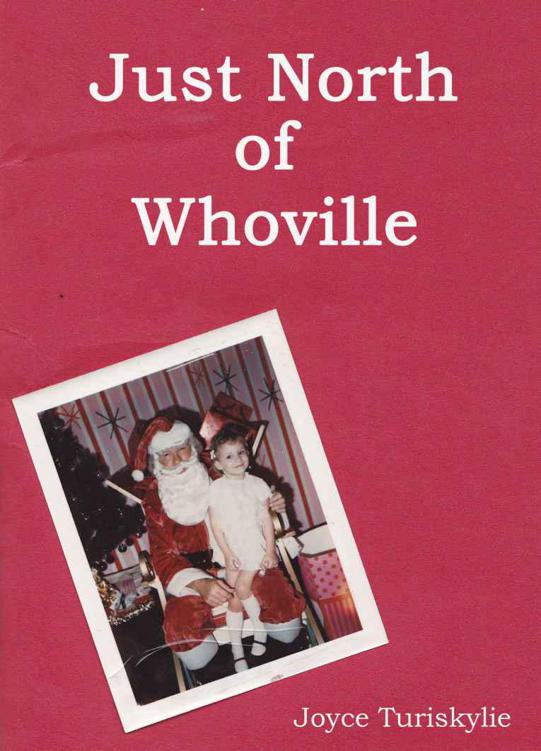 My mother always taught me not to expect too much out of life.

But once a year, I got to meet that one special person who allowed me to hope and dream.

Santa never told me I was a dreamer. Never reminded me about the starving children in Africa. And never told me to only ask for three things not more than twenty-five dollars each.

Santa let me ask for a pony.

And a year later, never told me I was crazy when I upped it to a horse.

Every year, when he asked if I’d been good, I not only replied that I certainly had, but pointed out the extra good deeds I’d done. I held up the Santa line at the department store detailing the Christmas Seals I’d sold for my Catholic school, my trick-or-treating for UNICEF, and the honors I’d been accorded for selling more cookies than any girl in my Brownie troop.

As Santa listened to my tale of the plaque I’d been given for possessing True Brownie Spirit at the Mother-Daughter luncheon, I could just tell by that twinkle in his eye that he was thinking one thing:

As he bounced me on his knee, he was not just entertaining a wee young lass, but secretly measuring my weight, my potential rate of growth, and my suitability for a certain black stallion he kept on reserve for just such a girl.

I could almost see the look on my parents’ faces Christmas morning as they awoke to the sound of a whinny.

Bleary-eyed, we would make our way down the garland-wrapped staircase; and there----with a big, red velvet bow around his strong, sable neck, would be my equestrian knight.

Yes. His name was Fury.

And somehow, Fury and I would suddenly live in the country. Away from the suburbs and our tiny fenced-in yard. And every day would be summer. And Fury and I would have wonderful adventures. Saving people who had fallen down wells and catching the crooked salesman who swindled Old Widow Jones.

Even then, I knew it was all about giving back.

Unfortunately, I never got a horse.

Some might say it’s depressing being a thirty-four year-old temp. But I try to look on the bright side----at least I’m not an intern.

Five months earlier, I was an intern. At a certain off-Broadway theatre, which shall remain nameless. After all, one day they might hire me for an actual job. I’m a nice person. So I try to only say nice things. Some days it’s hard. Not everyone’s nice.

Krakowski is a Polish last name. It usually signifies a person from Krakow. I suppose at some point, my ancestors lived there. But everyone in my family lives in Wisconsin with a few in Ohio on my mother’s side. None of them have ever been to Poland. At this point, they might as well change their last name to Midweski. They really don’t leave. Not even for vacations.

And Dorrie is short for Dorota, the Polish version of Dorothy.

Not that they’re into being Polish. They just seem to accidentally marry other Poles. My older brother’s name is Justin. But when I was born, Mom was on a big Discover Your Ancestry kick. There’s a picture of her at a family bar-b-que wearing a t-shirt that says, “Polish and Pregnant” with the arrow pointing up instead of down.

Get it? Because Polish people are so dumb they don’t know where the baby is…

And underneath the t-shirt is little fetal me. My first picture. The object of a dumb Pollack joke.

But I love my family. They are salt of the earth people. And anything good in my character I owe entirely to them.

Nevertheless, four years ago, I did the unthinkable. I left Milwaukee and came to New York City to pursue my dream of being a great theatrical director.

I was almost thirty and realized my talents could no longer languish in Wisconsin. I had it all planned out. I would come to New York, start my own theatre company, and be a central figure in the “New Millennium Theatre”---or whatever moniker a clever, yet worshipping critic, attached to me and my brilliant peers. Fifty years from now, books would be written on our theatrical innovations and our camaraderie. Like the Beats of the Fifties or Hemingway’s Paris of the Twenties.

I had it all planned.

Needless to say, it was a bit of a comedown to find myself waiting tables and wedged into a two-bedroom apartment in Washington Heights with two college girls and a twenty-five year-old gay tattoo artist. We had nothing in common except that we each took turns buying toilet paper once a week. I watched the girls graduate from college and get their first real jobs. Then Shannon met his life partner Hajji. In the three years we lived together, I watched them move on to wonderful new stages of their lives.

Our lease was up and everyone was moving away.

I felt like an Empty Nest Mom---only without a nest.

Luckily there was Celia, an old friend from high school I hadn’t seen in almost fifteen years. In typical New York fashion, we just ran into each other one day on the street. She’d moved to New York right after college and started her own design firm. Office Interiors. Decorating and furnishing offices for on-the-go executives who were too busy to do the job themselves.

It was thru Celia that I found my apartment. Well, not MY apartment exactly. My sublease. My illegal sublease. Celia’s boyfriend, Alex, had lived in the apartment for years. When their relationship began to turn serious, they decided to move in together.

Despite being a Wall Street broker, Alex’s apartment left much to be desired. Fifth floor walk-up and the plaster crumbling off the walls and ceiling. He admitted it was a dump, but worried that fixing it up would seem a little gay.

But even Celia, who could attest to his virility, wasn’t in favor of the idea.

“
The floor needs work, too,” Celia explained. “You’d have to strip it to the bone to get it in shape. And god knows what kind of hazardous materials are underneath all that. You’d need professionals. For a rental? It’s ridiculous.”

“
Why doesn’t he just get rid of it?” I asked as we shared a bottle of Chardonnay at her penthouse on the Upper West Side.

“
That’s what I said! He keeps telling me that the rent is so cheap it would be a shame to give it up. But I know the truth. He won’t let go of that apartment until he’s sure of us.”

“
Well, it’s a cheap apartment in Manhattan. You can hardly blame him.”

“
Say,” she suddenly brightened. “That apartment would be perfect for you!”

A week later, I was ensconced in my “very own” large, railroad-style studio apartment in Midtown for the same price I was paying for sharing a two-bedroom with three other people way uptown. My good fortune was tempered only by the words she spoke as she handed me the keys.

Suddenly, my life flashed before my eyes---a series of crappy, low-paying jobs peppered with a few (I thought) brilliant, but unknown theatre productions. Most likely, Celia was the first person I’d ever known who truly believed in me. It was frightening.

I set to work right away, taking only the minimum amount of time to discreetly move my things into the abandoned apartment. Shannon and his partner agreed to help---though the two of them didn’t look like they could lift a mattress, let alone a box spring. They both carefully maintained the look of heroin-chic, without the heroin. But if you can get anybody to help you move into a fifth floor walk-up, you don’t ask how much they can bench. You just say “thank you”.

After much consideration, Saturday night seemed to be the best choice to quietly sneak myself and my belongings into the building. The likelihood of a super, landlord or building owner being anywhere in the vicinity at nine o’clock on a Saturday night was pretty slim. It was early enough to not really disturb anyone, and yet late enough that if there were any noise, fellow tenants would just rack it up to the usual Saturday night crowd coming and going. I rented a budget truck and within two hours, we had hauled all my crap up the stairs. I say crap because after two hours of hauling boxes, bags and assorted bits of furniture up five flights of stairs, it all becomes crap.

Two hours later, our arms were mushy, our legs jiggled, and our entire bodies ached. I offered to do the moving thing and order some pizza.

I had a feeling they had discussed the eventual offer of beer and pizza in the stairwell between transfers of my many boxes of books. They just wanted to get away. From me and all my crap.

Within seconds, they were gone.

And there I was. Alone. With all my crap.

That first night, I unpacked but one thing----my computer.

I had to make Celia proud. I had to get a real job.

I spent that entire first week sending out cover letters and resumes, called pretty much everyone I’d ever met asking for job tips and advice, and even applied for numerous unpaid (but prestigious) positions hoping for an “in”.

My second week in the apartment, I finally began to unpack. I felt positive. I waited for the calls and emails to come in. Surely there would be a few rejections. But I was a good interview. People liked me. I was a people person. I’d been told that. By people.

And sure, I might not be the perfect person for every job. Let’s be honest---there’s some stiff competition out there. Someone just might have more experience than me. Nothing beats experience. Not even good interview skills. Or perhaps the fit just wouldn’t be right. Maybe not for this play….but we’ll keep her in mind for our Fall production. Or maybe, just maybe, someone just plain old didn’t like me. It could happen. And you know what I say to that? Well then, I don’t want to work with that person. Why work in an uncomfortable environment, I say?

But I felt good. Positive.

In one week, I applied to fifty-six jobs. I did some kind of creative mathematics and calculated that out of those fifty-six applications, I would get nine interviews and would be offered three jobs.

I would probably have many more offers than that. But I tried to keep my optimism in check, not wanting to get too disappointed.

In the end, the amount of jobs I got was none. Amount of interviews? Zero.

Nothing. Nothing at all.

I might as well have sent my resumes and carefully worded cover letters to Santa Claus, North Pole.

I sunk into a deep depression. The way I always did when this happened. Because, despite my optimism, the exact same thing had happened many times before. No one packs their bags and comes all the way to New York City to be a waiter.

I’d been doing this routine ever since I moved to the city. It always resorted in nothing.

I felt horrible. Avoided family and friends. And stayed up late nights pondering what I could possibly have done wrong.

At the end of my usual week of depression and self-examination, I had come to no deep insights into my personal blunders and career mishaps. I just had to keep trying. It was all I could do.

The next day, I was back in the saddle. Working on proposals and resumes and cover letters; determined to carve out a niche for myself in New York theatre.