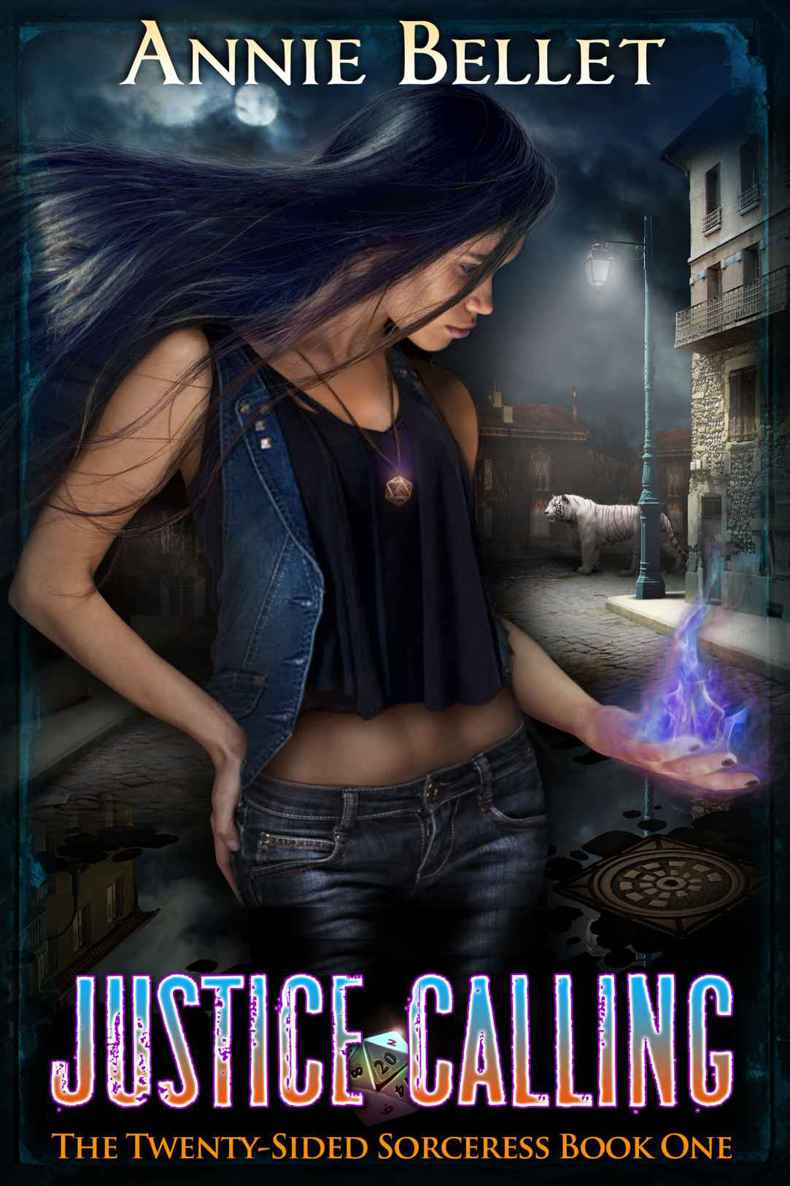 The Twenty-Sided Sorceress: Book One

This novel is a work of fiction. All characters, places, and incidents described in this publication are used fictitiously, or are entirely fictional.

No part of this publication may be reproduced or transmitted, in any form or by any means, except by an authorized retailer, or with written permission of the publisher. Inquiries may be addressed via email to
[email protected]
.

If you want to be notified when Annie Bellet’s next novel is released and get free stories and occasional other goodies, please sign up for her mailing list by going to:
http://tinyurl.com/anniebellet
. Your email address will never be shared and you can unsubscribe at any time.

Life-changing moments are sneaky little bastards. Often we don’t even know that nothing will ever be the same until long after, only in hindsight can we look and say “There! That was it! That changed everything.”

Well, at least we could, if we’re alive to do it.

For me, it was just another Thursday evening on a blustery spring day. I was finishing up a Japanese to English translation job and only somewhat pretending to mind the register in my comic and game shop. That’s the benefit of being the owner, I suppose. No one was going to tell me to be cheerful and pay attention to customers.

There weren’t any, anyway. Thursday nights are game night and we close early. I hadn’t flipped the sign yet as I was waiting on Harper, my best friend of the last four years, to stop swearing at her game of StarCraft.

“No amount of Banelings in the world are going to save you here,” I said, glancing over at her screen.

“Marines are overpowered,” she growled.

“Sure,” I said, trying not to laugh. It was an old gripe. Whatever race her opponent played in the game was always OP, according to the logic of Harper. “Maybe you should play with a mouse instead of just your track pad?”

“I’m practicing my hotkeying,” she said. “Shut up, you’re distracting me.”

The string of bells on the door tinkled and I turned away from my laptop to face the front of the store, figuring it was either a college student or a harried mother looking for Pokemon or Magic the Gathering cards. Those types, beyond my regulars, are about all that trickle into my store on weekdays.

The man who came in was no college student, and he definitely wasn’t a soccer mom. He walked through the door and paused, his head turning and his eyes wide from the change between daylight and the strategically placed lamps I keep in my shop. He took in the front display of the latest adventure releases and the wall rack of new release comics, then stepped further in, head turning as though searching for something or someone.

His uncertainty gave me a moment to look him over. He looked roughly thirty years old and somewhat like a Hollywood version of a Norse God. About six foot six with shaggy white blond hair, features that a romance novel would call chiseled, and more lean muscle than a CrossFit junkie. He was also packing a handgun, mostly hidden beneath his custom fitted leather jacket.

So, you know, not your average comic book or tabletop gaming enthusiast.

There was also the part where my wards hummed for moment, a sound only I could hear. Which meant he wasn’t human, either.

Not that this was weird for the town of Wylde, Idaho. Most of the non-college-student population isn’t wholly human. We’re the shape-shifter capital of the West. Harper herself is a fox shifter, two of the other three in my game group are a wolverine and a coyote. Guy who owns the pawn shop next to me is a bonafide leprechaun and the woman who runs the bakery on the other side is some kind of witch or maybe a druid. The thick ley lines that run through the River of No Return Wilderness at the edge of town draw all kinds of supernaturals to the area.

It’s what had drawn me here. I’d always heard the best place to hide a leaf is in a forest.

I was immediately on my guard. Wards aren’t really my strong suit, so I didn’t know what flavor of preternatural this giant was, but the gun didn’t bode well. Nor did the way he looked at me like he recognized me, or the way he came over to the counter, moving with preternatural grace around the comic book displays. I gathered my power inside myself, preparing to send a bolt of pure energy into his chest if needed. I hadn’t cast a real spell like that in years, but I figured I could get a single one off without knocking myself unconscious with the effort. Probably.

“Can I help you?” I asked, glad the counter was between us, even if the glass case full of dice and card boxes would be little more than a stutter-step to clear for a shifter.

“Who are you?” he said. His voice was deep, with a slight accent. Russian maybe. His eyes were the blue of glacier ice and his expression about as welcoming.

“Jade Crow,” I said, teeth grinding with the effort of speaking and keeping control of my magic. “Who are you?”

“Hi handsome,” Harper said, climbing out of the overstuffed chair next to me that she’d been gaming in. She snapped her laptop shut and gave the newcomer a dazzling smile. She was angular and punky, with spiky brown hair and a way of making men forget what they were going to say when she smiled.

Then she stopped smiling and her eyes got huge, focusing in on the silver feather he wore strung around his neck. “Oh, shit. Justice. Forgive me.” And she bowed her head like she was addressing some kind of royalty.

“Justice? Like one of the shifter peace-keepers, right?” I said, my voice shaking a little with the effort of holding onto my powers for this long without letting loose. “The fuck is going on?” I glanced at Harper and then back at the intruder, keeping my eyes on the feather talisman. Yeah, it was better to look at his neck. Or his chin. His lips were way too kissable.

I shoved that thought away for later. Much, much later.

“I am Aleksei Kirov, a Justice of the Council of Nine. And you,” he said, gesturing at me, “are a murderer.”

“What?” Harper and I said at the same time. We shared a baffled glance. I hadn’t killed anyone in my life, though not for lack of trying once. But still.

Behind the Justice and invisible at the moment to anyone but myself, my spirit wolf guardian stirred, rising up from where she’d been sleeping. Wolf didn’t growl though, just cocked her head and stared at Aleksei, ready for trouble but clearly not expecting it quite yet.

“I haven’t killed anyone. Ever.” I let go of the magic inside me before I accidentally lost control and unleashed. Wiping the sweat from my forehead, I ran my shaky hands over my hair and tugged my waist-length ponytail over my shoulder.

Aleksei relaxed as a confused look came over his face. “You tell the truth,” he said. “But I saw you in a vision. The Nine sent me here. There are shifters in danger and you were at the center, at the crossroads between their lives and their deaths.”

I opened my mouth. Closed it. A small chill went through me. The only way I could see shifters dying because of me was if HE had found me. My psycho ex mentor and lover. I started to mentally pray to the powers of the universe that
that
hadn’t happened or we were all in deep, deep shit.

“Nobody is in danger that we know of,” Harper said. “Uh, Justice,” she added, still trying to look respectful.

What I knew of the Council of Nine was practically legend, the shifter version of gods. They had Justices, powerful shifters appointed to keep the peace among shifter populations, and to keep the secret of shifter existence from most of the human world. They were judge, jury, and executioner all in one. Shifters didn’t get up to much crime, but if they did, the sentence was almost always death. Pretty good deterrent, I suppose.

“Unless you pose a danger to shifters. What are you?” Aleksei asked, his ice-chip eyes narrowing. Subtlety was apparently not one of his charms.

“She’s a hedge-witch,” Harper answered for me. I was glad, since this Justice guy seemed to have the ability to detect lies. Harper wasn’t lying because as far as she knew, that’s what I was. She was just wrong.

Even though she was my best friend, I couldn’t tell her the truth. I couldn’t tell anyone that I was a sorceress. Because they’d all try to kill me, or at least drive me away. Nobody likes sorcerers. Probably because most of us are assholes who kill and eat the hearts of supernatural beings for their power.

I was saved from having to verbally confirm or deny my witchiness by Ciaran. He pushed through my front door, all four foot nothing of him, his copper and silver hair neatly combed and his red coat clinging to his plump body. I looked at the clock on my computer monitor and muttered a curse. It was later than I’d thought.

“Harper,” Ciaran said with a nod and barely a glance at Aleksei. “Jade,” he addressed me next in Irish, “I’d really like you to come have that look at my things before I die of old age.”

“For a man who watched Saint Pat drive out the snakes, you’re looking fine to me,” I said, also in Irish.

That leprechaun neighbor of mine I mentioned? That’s Ciaran. He’d picked up a load of things in an auction the day before, and as always with old things he liked to have me check for magical auras and any hidden surprises. I didn’t use my talents much out of fear of broadcasting my location, but minor magic like detection was as easy as breathing for me, so I did the neighborly thing and helped out when he needed.

“So, uh,” I looked at Aleksei. “Since I haven’t killed anyone and am not planning to, maybe you can just go Justice somewhere else? I’m closing shop.”

“I will stay here. We will talk after. My visions are never wrong.”

From how rigid he was and how intently he stared at me, I wondered if maybe he had a sword up his ass or something. “Okay, buddy. Just tone down the creepy before I get back. And you’ll wait outside my store. I don’t do strangers.” Whoops. That came out weird. “In my store. I mean, alone. I mean I can’t leave you here alone. So wait outside.” Great. Now I was babbling.

“Fine,” he said and I swear to the Universe the bastard smirked at me.