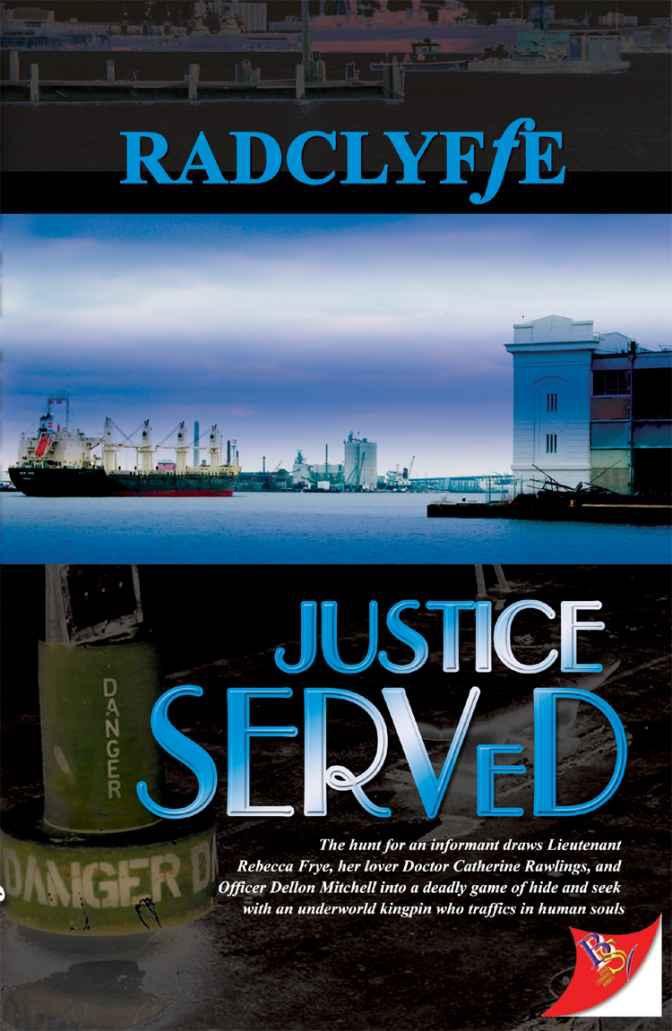 The hunt for an informant in the ranks draws Lieutenant Rebecca Frye, her lover Doctor Catherine Rawlings, and Officer Dellon Mitchell into a deadly game of hide and seek with an underworld kingpin who traffics in human souls.

Newly promoted Detective Lieutenant Rebecca Frye once again assembles her unorthodox team of lovers and friends to bring the hunt for a deadly informant in the police department to justice. Aided by JT Sloan, a cyber sleuth with a personal score to settle, Rebecca soon discovers the conspiracy extends far beyond the police department into the underworld of those who trade in human souls. Pressured by her superiors, driven by the private need to avenge her murdered partner, and determined to succeed, she must put one officer’s life at risk and her own heart on the line. New release. This  Electronic Book is published by

Secrets in the Stone

A Matter of Trust (prequel)

In Pursuit of Justice

Justice in the Shadows

With each Justice entry I write, I say, “That’s it. I’m done with this series.” It’s difficult to write on many levels, but each time I begin a new story in the series, the characters spring to life and I lose myself in their journey.

My beta readers sustain me through the long weeks of uncertainty as each tale unfolds and I question if I will ever be able to do the story justice. They never let me down, providing insight, encouragement, suggestions, and critiques with tender care. I count on them to keep me from going astray. Thank you Athos, Diane, Denise, Eva, Jane, JB, Paula, Robyn, and Shelley.

In addition, I’d like to extend my appreciation to all the members of the Radlist for constancy and inspiration, to Ruth Sternglantz and Stacia Seaman for fine editorial input, and to Linda Hill, for her vision and commitment to lesbian fiction.

Lee has never complained about the sacrifices she’s made to help me realize a dream. For that, I am ever grateful.
Amo te.

For Taking a Chance

“I don’t think the doctor wants you going up and down stairs yet,” warned the small blond in the skintight black Capri slacks, white ribbed tank top, and open-toed stack heels. October was around the corner, but Sandy Sullivan rarely wore more than the bare essentials.

“Have to try,” Officer Dellon Mitchell grunted. Grimacing with the effort, she swung her injured left leg free of the crutch as she maneuvered up the first stair in the hospital stairwell. “You live on the third floor, remember?”

“We can stay at your place, Dell.
You
have an elevator and a doorman,
remember
?” Hands on hips, Sandy stepped back to allow the young, dark-haired police officer to set her crutches onto the next stair, but stayed close enough to catch her should Mitchell lose her balance and topple over. Considering that Mitchell was a head taller and twenty pounds of muscle heavier, Sandy might have trouble breaking her fall, but she was not about to let anything else happen to her new lover.

“I don’t want to lie around in my apartment.” Sweating, Mitchell paused long enough to brush her forearm across her forehead. The shock of jet-black hair promptly tumbled back into her eyes. Her bad leg felt like it weighed fifty pounds, and she couldn’t believe how much her arms were shaking. She didn’t want Sandy to see that, or she had a feeling she would be forcibly dragged back to bed. Even if Sandy
was
half her size, when she was fired up, she was unstoppable. “I want to be able to get back to work.”

Mitchell also didn’t want to point out that it would be better for both of them if they remained visible on the streets in Sandy’s neighborhood, a part of town known for its small-time hustlers, corner drug dealers, and prostitutes. Mitchell had just begun an undercover assignment, and Sandy was supposed to be her girlfriend. The fact that the cover story had suddenly become the truth complicated issues, but they still needed to maintain appearances.

“What’s the matter? Are you afraid you’ll get a bad reputation if you have a hooker in your swanky apartment?” Sandy’s tone was less accusatory than anxious as she watched Mitchell, still in her hospital gown. The young cop was as pasty white as she had been the night before, her dark blue eyes clouded with pain that she thought Sandy couldn’t see. “Getting soft, rookie? I didn’t think you cared what your
doorman
thinks.”

“I don’t,” Mitchell said through gritted teeth. “Especially about you. But I care about people tying me
or
you to the action the other night.”

Thirty-six hours before, Mitchell had been stabbed while apprehending several key suspects in an Internet pornography ring. Those arrests had climaxed weeks of work by an unusual team of Philadelphia police officers and civilian consultants led by Mitchell’s mentor and role model, Detective Sgt. Rebecca Frye. Mitchell wanted back on that team more than she’d ever wanted anything in her life, except the young woman who peered at her anxiously with a frown on her pale, worried face. And the fastest way to get back on the team was to get back on her feet. “If I didn’t blow my cover already, I don’t want to now.”

“No, you’re not.” Sandy moved closer and wrapped her arm around Mitchell’s waist. “You’re just as stubborn and blockheaded as a certain
other
cop I’ve met. But you don’t have to be like Frye all the time.”

“It’s not about Frye.” Mitchell allowed herself to lean against Sandy while she caught her breath and swiped futilely at the sweat now beaded on her entire face. “I’m just not used to these crutches.”

“Yeah. And it doesn’t have anything to do with the fact that you just got operated on yesterday morning and lost a couple of buckets of blood before that, either.” Sandy snorted in disgust. “Jesus, cops are such a pain in the ass.”

“Are you going to bitch at me the
whole
time I’m laid up?” Mitchell feigned distress, but she was grinning. She leaned back against the wall, angling her body to take the weight off her leg while making room for Sandy to snuggle up against her.

“I don’t know,” Sandy replied, wrapping her arms around Mitchell’s waist before kissing her neck. They’d been lovers for less than a week, and Sandy couldn’t look at her without getting wet. “It depends on how long it takes you to get better. If it takes
too
long, I could get very cranky.”

“You think I won’t be able to take care of business?” Mitchell dipped her head, brought her mouth to Sandy’s, and ran her tongue lightly over the surface of Sandy’s bottom lip. Sandy moaned softly, and Mitchell’s heart rate skyrocketed.
Oh man, now I
will
fall down.
With the heat of Sandy’s body warming her all the way through, she didn’t care a bit if they ended up in a heap on the floor. As she flicked the tip of her tongue over the inside of Sandy’s lip, she snaked a hand beneath the back of Sandy’s tank top. She could practically span the entire width of her girlfriend’s small waist with one hand. “God, you feel good,” she muttered.

“I don’t think this activity is on the prescribed list of treatments for stab wounds,” a voice on the verge of laughter announced from behind them.

Mitchell, sliding her arm protectively around Sandy’s shoulders, jerked her head up. Her gaze met the laughing brown eyes of her surgeon, Ali Torveau. Mitchell blushed.

“Good,” Sandy grumbled, lifting her chin in Dr. Torveau’s direction. “Maybe Dell will listen to
you
.” Carefully, she disentangled herself from her girlfriend and moved away. “She won’t admit she’s about to keel over.”

“Sandy,” Mitchell complained with a sigh.

Torveau leaned against the wall in the stairwell and folded her arms across her chest, her eyes narrowing as she watched Mitchell maneuver down to the landing. “How do you feel?”

Passion Ignited by Katalyn Sage
Secret Keepers and Skinny Shadows: Lee and Miranda by Mary A Russell
Across The Tracks by Xyla Turner
The Time of the Uprooted by Elie Wiesel
A Persian Requiem by Simin Daneshvar
Runaways by Zilpha Keatley Snyder
The Copernicus Deception (The Human Chronicles Saga Book 15) by T.R. Harris
Cuatro días de Enero by Jordi Sierra i Fabra
Lord of Pleasure by Delilah Marvelle
The Mermaid Garden by Santa Montefiore