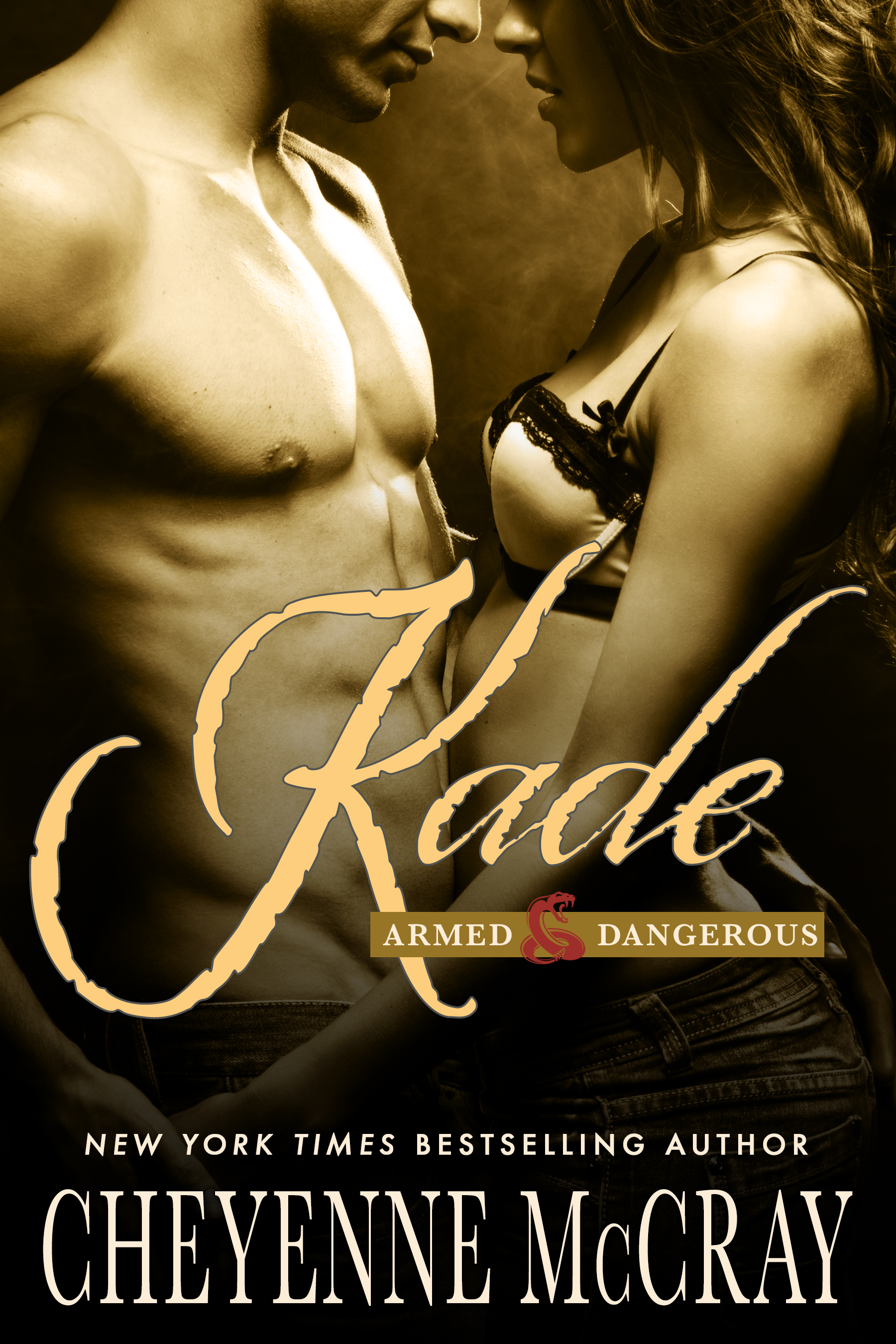 All rights reserved. No part of this e-Book may be reproduced in whole or in part,
scanned, photocopied, recorded, distributed in any printed or electronic form, or
reproduced in any manner whatsoever, or by any information storage and retrieval system
now known or hereafter invented, without express written permission of the publisher,
except in the case of brief quotations embodied in critical articles and reviews.

This is a work of fiction. Names, characters, places, and incidents are products of
the author’s imagination or are used fictitiously. Any resemblance to actual events,
locales, or persons living or dead is entirely coincidental.

Cover by Scott Carpenter from
http://www.pandngraphics.com.

Thank you to all of the Border Patrol agents, ranchers, and residents of southeastern
Arizona who aided me in my research. And to my editor, agent, and crit partners—couldn’t
do it without you.

Kade: Armed and Dangerous
was published in print only with St. Martin’s Griffin.
Kade
has its foundation in a novel titled
Wild Borders
that I wrote originally for Ellora’s Cave.

This novel holds a special place in my heart, as it was my first romance. The characters
are special to me, as is the location in southeastern Arizona, where I was raised.
Even the ranch, where a good portion of the novel takes place, mirrors the ranch I
grew up on.

It is my hope that you enjoy reading this book as much as I enjoyed writing it.

When I began research for this novel I was given the utmost courtesy by members of
the U.S. Border Patrol. The agency has since been reorganized under the umbrella of
Customs and Border Protection within Homeland Security. I enjoyed going on a ride-along
as well as interviewing Border Patrol agents.

Many ranchers and residents of Cochise County in southeastern Arizona were especially
accommodating, giving me their views and opinions on the climate of living in a border
community and how the situation affected them.

Many changes have taken place in the world since I originally researched and wrote
this novel. Although I have attempted to accommodate as many of these changes as I
could, some things have not been addressed.

I have taken liberties with buildings and locations throughout the towns of Douglas
and Bisbee. However, the histories of both Bisbee and Tombstone are well-known and
what I included in this book should be fairly accurate.

In this same corner of Arizona, I grew up on a ranch much like the JL Star. I hope
you enjoy your visit to this little part of the world that I’m originally from, a
place that I still love to visit from time to time.

Kade Owen dragged his hand over his stubbled face as he settled into the plastic airport
seat while waiting to board the plane he’d be taking to Tucson. He was ready to get
out of dreary San Francisco, back to Arizona, and home to his son.

And then catch those damn coyotes, the people-smugglers who’d managed to elude him
for far too long. Especially the bastard known as El Torero.

It was dark outside, a slow drizzle rolling down the large panes of glass, and he
was looking forward to Arizona sunshine. He pulled his black Stetson low so that he
could observe people around him without being obvious. In his line of work as an Intelligence
Agent with the U.S. Border Patrol, people-watching was a necessary skill. But now
he was doing it to pass time before his plane was scheduled to depart.

Hair at Kade’s nape prickled—he had the distinct feeling he was being watched. He
looked casually to his left to see a young woman staring at the screen of a small
laptop computer. Something in his gut told him she’d been studying him a fraction
of a second earlier.

Kade pushed up the brim of his Stetson and raked his gaze over the woman. She sure
was pretty, her shoulder-length hair the golden color of an Arizona sunrise. She had
the type of shapely figure he preferred, nicely rounded and sexy as hell.

From a gap in her pink silk blouse he could see a bit of lace covering her generous
breasts, beneath the soft material. His gaze traveled down to those long legs beneath
the skirt that hit a couple of inches above her knees. Yeah, she sure had terrific
legs, and he’d bet she had a great ass—

He broke off his appraisal as the woman glanced up and her gaze met his. She had gorgeous
eyes, warm and deep brown. The connection between Kade and the woman, for that fraction
of time, was tangible. Like she’d lassoed him with that one look. She immediately
blushed a pretty shade of pink and looked back at her computer.

Kade couldn’t help but grin. Damn, she was cute. She might be worth getting to know.

Well, hell Wasn’t it just last night he’d told his sister, Dara, that he didn’t want
a relationship? In the five years since Lorraine’s death, he hadn’t met a single woman
he was interested in pursuing. Not one. He’d gone on dates, but few and far between.
Yet there he was, fascinated with a stranger in an airport a thousand miles from home.

“Flight twelve-sixteen with nonstop service to Tucson is now boarding everyone with
an A card,” announced a voice over the intercom. This particular airline had “cattle
call” boarding with no assigned seats.

Kade stood, and he noticed the woman had slipped her laptop into a bag and was already
walking toward the gate, giving him a nice view.

Yeah, she definitely had sexy legs, and she had a great ass.

Several passengers crowded in front of Kade, so he had to wait awhile longer for his
turn to board. When he finally made it onto the plane, he worked his way back. He
noticed the pretty blond in a window seat, staring outside, and no one was sitting
in the middle seat next to her.

He took off his Stetson and set it in the overhead compartment. With his big frame,
he usually disliked sitting in the middle, but this time it would be just fine. Careful
not to bump the woman, he eased into the seat next to her, extended the seat belt,
and buckled it.

A flight attendant helped an elderly lady put her bag into the over-head compartment
and then the lady sat next to Kade. He nodded to her and said, “Ma’am.”

The woman’s pale blue eyes held a hint of amusement. “You’re too polite to be a Californian.”

“Just spent a week in Frisco with my sister and her twins.” He smiled, wishing he’d
been able to spend more time with his niece and nephew. If he hadn’t had to go to
that briefing in San Diego beforehand, he could’ve taken his son, Trent, to Dara’s
with him. He sure missed the kid and looked forward to getting home.

“I’m visiting my grandchildren in Tucson.” The lady shook her head and sighed. “Hellions,
all. Love them, but a weekend is about as much as I can handle. Now those kids could
use some lessons in manners.”

She punctuated her statement with a jab of her fist in the air, then began digging
through an enormous purse. “In here somewhere, I have pictures their father sent...”

Kade held back a grin and glanced at the woman in pink on his other side. Her forehead
was pressed to the pane, and she was apparently lost in her thoughts. She sure smelled
good. Real good. Like honeysuckle and soap, clean and fresh.

The windowpane felt cool against Kelsey’s forehead as she stared into the darkness.
She sighed and turned her thoughts back to that gorgeous hunk of man in boots she’d
seen in the airport.

She’d been so embarrassed to find him studying her from beneath his black cowboy hat.
What incredible blue eyes he had—and that sexy grin could melt a woman’s soul. Thank
goodness he hadn’t noticed her watching him a minute before. As a journalist she’d
become a people-watcher, and lord, was that man something to watch.

Kelsey groaned. What was wrong with her? She had no interest in men after being married
to the biggest creep of the century. Thanks to what her father had put her mother
through when she was growing up, Kelsey should have known better. She should never
have let Davis Johansen’s lies make her believe in happily-ever-afters.

But as far as that cowboy in the airport, what harm was there in looking? Kind of
like window-shopping with no intention of sampling or buying the merchandise.

She was finally free, finally divorced from Davis.

“Good riddance, creep,” she grumbled, her breath fogging the pane.

Kelsey jumped at the sound of the husky voice, so close that a shiver sprinted down
her spine. As she whirled in the cramped seat, her elbow rammed hard flesh. Heat crept
up her neck when she saw the cowboy’s blue eyes wince.

“I’m so sorry.” Her gaze swept over the tanned face, strong chin, and the chestnut
hair that had been hidden under the cowboy hat earlier. “Did I hurt you?”

The man grabbed his side and grimaced as if in mortal pain. “I’m not sure I’ll live.”

That familiar flush spread throughout Kelsey, the telltale blush that would redden
her face from the roots of her hair to the tips of her toes. She offered a half-smile
and turned back to the window.

Lights flashed on the wing and reflected on the wet asphalt, a steady rhythm in time
with her throbbing pulse. She watched as a man on the tarmac guided the plane onto
the runway. Her heart rate rocketed, her palms slick with sweat. The scar on her upper
thigh ached and she rubbed it through her skirt.

“I’m sorry if I embarrassed you,” the man beside her said, his voice low and disturbingly
close.

A thrill rippled in her belly as she forced herself to face the man. “Not at all.”

“Kade Owen.” White teeth flashed against tan skin as he smiled and offered his hand.

Kelsey caught his earthy scent of sun-warmed flesh and apples, and she fought the
desire to dry her moist palm on her skirt before his callused hand engulfed hers.
His grasp sent tingles throughout her and she quickly pulled away.

“What’s your name, ma’am?” he said in that slow and sexy voice that sent a shiver
straight through her.

“Kelsey,” Kade drawled, a slight, almost imperceptible country edge to his voice,
and she shivered. “A pretty name for a pretty lady.”

Just the way he was looking at her, the way he said her name, made her want to squirm
in her seat.
Good lord.
If just talking to this man was making her feel like this, what would it feel like
to really be with him?

Nope. Not going there.
She’d had it with men, and that was that.

The plane started to taxi down the runway, throwing Kelsey into her worst fear. All
she could do was close her eyes tight, pray, and try to shove the heart-wrenching
memories from her mind. Every muscle in her body tensed, and she gripped the armrests
as if the mere act would guide the plane into the air and keep it there.

At least until it was time to land.

Macrolife by Zebrowski, George;
To Reap and to Sow by J. R. Roberts
Witch Twins by Adele Griffin
All Due Respect Issue #2 by Laukkanen, Owen, Siddall, David, DeWildt, CS, Beetner, Eric, Rubas, Joseph, Sweeny, Liam, Adlerberg, Scott
Saviour of Rome [Gaius Valerius Verrens 7] by Douglas Jackson
The Renegade Hunter by Lynsay Sands
Raelia (The Medoran Chronicles Book 2) by Lynette Noni
The Manual: What Women Want and How to Give It to Them by W. Anton
The Getaway Car: A Practical Memoir About Writing and Life (Kindle Single) by Ann Patchett
Islam and Terrorism by Mark A Gabriel