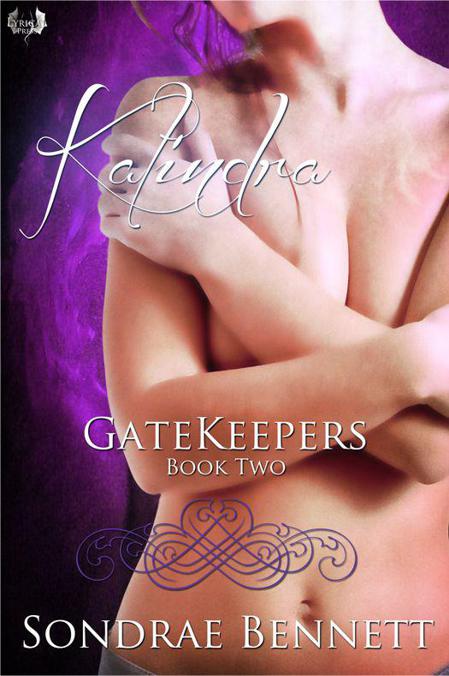 What happens when a warrior woman meets her match?

Harpy Kalindra stumbles upon three human corpses who’ve mysteriously crossed from Earth into Outremer through the portal she guards. A human prisoner with two traveling vampires seems her only clue. She captures the man, and brings him back to her lair to discover the truth–not only why he came to Outremer, but how he got past the defenses of the gate. She expects answers. What she doesn’t expect is the intense attraction she feels for him...attraction he seems to share.

Cameron has a secret. For years, he’s used a shard of the gateway to cross worlds without detection–for his own gain. When the gatekeeper saves him from the clutches of vampires who want the shard, he learns she’s not just another monster from Outremer. He can’t resist his attraction to her human form, and before long he’s feeling more than simple lust for her.

Kalindra’s gateway comes under constant attack from creatures who want what Cameron has. The assaults are his fault, but he can’t hand over the shard, which is a family legacy. He must convince Kalindra he can help defend the gate…but how?

Teasing him was cruel. She really should reveal who she was. But she hadn’t been this entertained in ages. People never told her what they really thought of her, too afraid of what she could do. Here was her chance to learn the truth. She glanced over her shoulder, and saw a teasing
come on
look on his face.

“You don’t?” he asked when she met his gaze.

She wouldn’t even know where to begin to answer that question, were it asked of her. Did she see herself as a monster? Sometimes. But she lived with the belief that she worked for the greater good. Her cause was worthy. Only suited to one such as her. Maybe one had to be a bit of a monster to guard the gate. To do what needed to be done.

“Vampires,” Kalindra cut in. A small distinction maybe, but an important one.

Thank you for purchasing this Lyrical Press book

For Annie, Silke, and Renee for going on this journey with me, especially Renee who brought us all together. And to Piper for making us all look good.

“Do you have to leave already? We’re just getting started,” Analise whined.

The two silver coins Kalindra tossed on the bar clattered against the wood. She slugged back the last sips of her one and only Dragon’s Breath brew before sliding off her stool. Using her claw, she pushed the chair awkwardly aside to make room for her wings.

Walking around with her claws and winged arms felt strange, especially in such an enclosed space. Proof positive that she’d been spending too much time in Inverness, as Outremers called the human world. Sure, when she needed to fight she’d change to harpy, but otherwise, she usually stayed in her human skin, just in case a human stumbled upon her. Not something that often happened on the deserted island where she lived, but she could never be too careful.

“Sorry, duty calls. Being this far from the gate makes me antsy.” It was making the gate antsy, too. She could feel its nervousness through her connection to the portal.

“Oh please, the gate will just teleport you back if there’s any trouble. Can’t you stay for just one more drink?”

She could tell Ana expected her to agree, and maybe part of her wanted to. But her life hadn’t been about what she wanted for a long time.

“Yeah, because if there
is
trouble, teleporting into a fight while roaring drunk is a brilliant idea.” Kalindra cringed at the sarcasm in her voice. She didn’t mean to be unkind, but Analise didn’t understand. Couldn’t understand. No one could. No one except her fellow gatekeepers. The three other pour souls who had the misfortune of being called into service.

But not like she had a choice in the matter. She was one of the “chosen,” otherwise known as damned. An honor, her ass. Still, Ana had been there for her whenever she needed her. The one person who never forgot her after she’d been in the human world for centuries. The least she deserved was an explanation.

“I can’t, Ana. But I promise we’ll do this again soon.” A promise she most likely wouldn’t keep.

“Okay. We’ll hang out in Inverness, next time.” The thought seemed to cheer Ana up, even as Kalindra frowned.

While technically Kalindra wasn’t supposed to let anyone through the gateway into Inverness, or Earth as the mortals called it, she’d made the mistake of allowing Analise to drag her to drinks in one of towns on the mainland in South Africa. The night had gone well until they left the bar, almost requiring Kali to fight the horde of men who’d followed them back to the boat. One intrepid young man had even tried to swim to her island. Thankfully his endurance gave out before Kalindra had to take drastic action. That was Analise. Inspiring the drunk and stupid to risk all in the face of lust. Kali had long since gotten over her annoyance about it. She couldn’t control it, and the men couldn’t control themselves with Analise around.

Few people in her world knew about the gateway, and she liked it that way. The fewer people who knew, the fewer who tried to cross. Kali never liked having to kill humans who stumbled upon the gate. Her job was to protect people. But sometimes it couldn’t be helped. Ignorance of the portal kept most mortals away.

She stumbled. When had she started to think of Earth as her world?

Sure, the past few centuries she’d camped out there. Had a home there. But Outremer was her world, her home, and always would be. Even if essentially she’d been exiled to Earth, Outremer was where she belonged.

“I gotta go,” she said with a shake of her head.

Throwing her arms around Analise, she gave her friend one last squeeze before exiting the pub. The crisp night air swept over her face in a welcome caress. Closing her eyes, she drew the air into her lungs, savoring the cold burn in her nose and throat. Gods, she missed the weather here. Sighing, she raised her arms and soared into the night.

With the wind buffeting her face, she almost felt normal. As if she could let go of her problems and her duty and just…be. But she couldn’t just be. Never again. Because she’d been called for gatekeeper duty, and the only way out was death.

She sighed. This feeling sorry for herself wasn’t helping. After all, it wasn’t that bad. She had all the skirmishes she could ask for, and her own castle to live in. Besides, she’d been watching the crossing for so long, she didn’t know anything else. There was comfort in waking up and knowing her place in the world.

So what if she got lonely every now and again. The gate kept her company. And she wasn’t really tethered to it. Short distances were well within her ability. Ana hadn’t been joking about the gate teleporting her back if anyone tried to cross the barrier. A failsafe alarm system of sorts. No reason she couldn’t get away more. She really should plan a visit home.

Letting the moment guide her, she made a loop in the air, twirling one way and then the other. But jittery anticipation continued to churn in her stomach, growing stronger by the minute. The gateway was getting impatient.

“Alright, I’m coming. Jeez, you’re worse than my mother,” she muttered into the night at the anxiety in her stomach. She needed to get home.

With another sigh, she turned south and soared into the night. She wasn’t in any real hurry. No one could cross between worlds without her knowing about it. The portal was just being paranoid. Getting away more would be good for both of them. She’d been with the gate a long time, but it wouldn’t do for the gate to become attached.

A couple people below pointed up at her and dove for cover. Their fear brought a smile to her face. Not a lot of harpies in this part of Outremer, and her reputation as a fierce gatekeeper preceded her.

She knew some of the other Keepers allowed certain creatures to escape to Earth for one reason or another, but not her. She might not have wanted the honor of being chosen, even if she had since come to terms with it, but she took her role seriously. No one got in, and no one got out. Those were the rules she’d sworn to uphold. Better that way for both worlds.

By the time she saw the round stone archway filled with the glowing wispy blue light representing her gateway in this world, dread had tightened her gut and her heart pounded in fear. The gate was trying to tell her something, she just knew it.
Felt
it in her core.

Something was seriously wrong.

As she neared, something on the ground caught her attention. Shapeless blobs littered the ground around the portal. What were those? Squinting her eyes gave her no clue, but the blobs were immobile. Nothing moved. She flew closer to get a better look. Then she discovered how right she’d been. Something was definitely wrong. Something that resulted in three battered corpses lying around the gate, faces twisted in grimaces of pain.

She landed nimbly next to one and examined the body. Throat torn out. Blood coated the front of the body. Their skin glowed in the light of the moon, devoid of all color.

Someone must have placed them here. They couldn’t have been thrown from the other side. No one guarded the gate but her. Not to mention the blood on the ground around the bodies.

And she couldn’t imagine anyone would kill them so close to the doorway. A family of trolls lived in the area, but if they had hunted these men, they’d have taken the bodies back with them.

She took a deep breath, using all her senses to help determine what had happened. Shock struck her as the scent filled her lungs, forcing her back a step. It couldn’t be. But her nose didn’t lie.

But
how
? Not possible. It simply was not possible. Unless these human had been in Outremer before she took control of the gate. Some creatures and objects had the ability to prolong life. Maybe these humans had been living here all that time. She stared at the bodies, looking for more clues to help her solve this puzzle.

Dear Old Dead by Jane Haddam
Among the Betrayed by Margaret Peterson Haddix
The Martian Journal by Burnside, Michael
The Monstrumologist by Rick Yancey
Savage Girl by Jean Zimmerman
Universal Language by Robert T. Jeschonek
The Extraction List by Renee N. Meland
Exiled (Anathema Book 2) by Lana Grayson
A Town Called Dust: The Territory 1 by Justin Woolley
When I Knew You by Desireé Prosapio