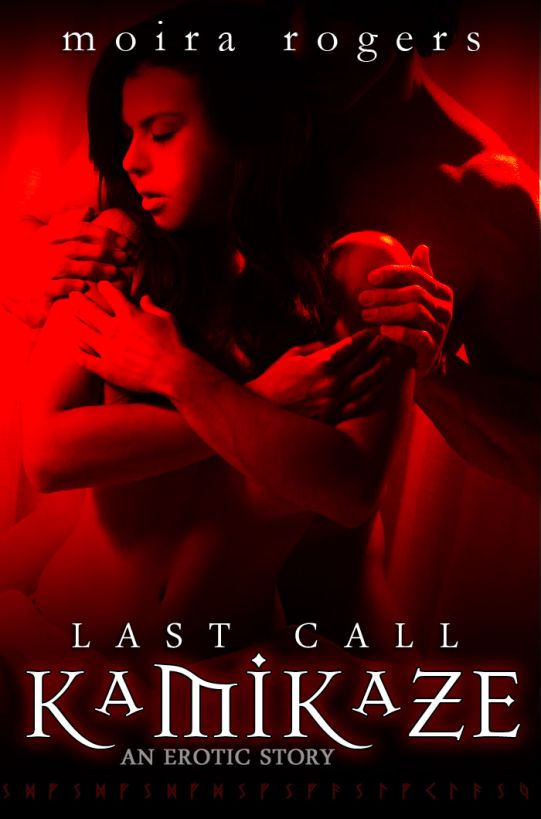 Originally
published by Changeling Press in 2008. Reissued by the author in
2012.

This is a work
of fiction. Names, characters, businesses, places, events and
incidents are either the products of the author’s imagination or
used in a fictitious manner. Any resemblance to actual persons,
living or dead, or actual events is purely coincidental.

All rights
reserved. This book or any portion thereof may not be reproduced or
used in any manner whatsoever without the express written
permission of the publisher except for the use of brief quotations
in a book review.

Werewolf in heat, looking for a temporary
mate.

Zoe Bennett needed to fuck someone.

It was a rather shocking
reality, one that alarmed her as she slipped through Last Call’s
crowded dance floor. Being alarmed by it didn’t make it easier to
ignore, however. Goosebumps rose on her skin every time a stranger
brushed against her. If that stranger happened to be a fellow
werewolf -- a
male
werewolf -- her nipples tightened and she had to fight off
a shudder of pure need.

She needed it tonight. Her
fingers clenched around the menu she’d picked up from next to the
door, creasing it as she finally broke free of the writhing mass of
bodies clogging the dance floor. She needed it, and nothing -- not
shyness, not her natural inhibitions,
nothing
-- could stop that need. Not
now.

Three wide steps from the floor
led up to the low platform that held the main attraction of Last
Call: a long, slightly curved bar with fifteen stools and a wide
corridor behind it. Three more bars crowded against the other walls
of the large room, but this was
the
bar. The bar where the drinks were
incidental.

The seats never stayed filled for long. Now
they were empty except for the left-most stool, which held a young
man with pale skin and sharp looking fangs that he flashed whenever
he laughed. His companion, a duskily tanned young woman, leaned
closer and ran her tongue along his ear as Zoe watched.

Zoe shivered and set her foot on the lowest
step. Nervousness rose, but the need burning in her pushed her up
to the second one.

By the third step she
could
feel
the curious stares on her back. She ignored them and closed
the distance between herself and the smooth mahogany of the bar.
Her hands shook a little as she slapped the menu down and sought
the bartender’s eyes. “I -- I have an order.”

His skin was the same color as the bar, and
his smooth, shaved head gleamed under the low light. A small,
high-tech looking headset curved over his head, something that
looked like it might serve as a microphone as well. He smiled at
her and nodded to the crumpled menu in front of her. “On or off the
menu?”

“
On.” She smoothed the menu out
and turned it over, her gaze sliding down the list of specials.
Last Call house drinks, each with its own meaning. Its own message.
And there was only one message she had for the men of the bar
tonight.
Take me if you can
. “Kamikaze, please.”

He nodded and reached up to tap the side of
the headset he wore. His strong, deep voice cut in over the music,
filling the bar and attracting the attention of most of its
patrons. “Last call for the lady in black. Kamikaze, coming up.” He
released the button and winked at her as the music resumed its
previous volume.

Zoe slid onto the stool at the
far right of the bar and struggled not to look at the dance floor
as the bartender made a show of mixing her drink, a process so
impressive it bordered on performance art. It made a good
distraction, one which gave her an excuse not to turn around and
watch the crowd behind her. She could
feel
the male werewolves approaching, and their
sudden, intense interest made her skin tingle.

Tradition declared that no one
approach her before she had her drink. Zoe ignored the appraising
stares and tried to smooth the wrinkles out of her menu again. The
back was a neat list, divided into sections.
Vampire, werewolf, witch,
fae…
Plain
black type delineated the various clientele of Last Call, along
with the “specials” peculiar to each kind. She slid her finger down
the page, past the bold
Werewolf
heading until she found kamikaze.

Werewolf in heat, looking for a temporary
mate.

Connor stared at the woman on the dais and
frowned. He wasn’t exactly a Last Call regular, but he’d been in
often enough to know she wasn’t the type of woman who usually
patronized the bar’s more exotic services.

She was wearing blue jeans, for
one thing. Not a low-riding pair of designer ones, either.
Serviceable jeans, faded by wear and not fashion. Her T-shirt was
similarly styled -- understated and solid black except for the
letters "PEBKAC" across the front. He grinned.
Problem exists between keyboard
and chair.

He rubbed his thumb over his
beer bottle as his eyes followed the curves of her body. She wasn’t
rail thin. Instead, she had the kind of body a man could wrap his
hands around. The kind he had no trouble picturing bent over in
front of him.
And she needs a mate.

No,
he told himself.
You’re here to update the
security software. Do it and get out.

Men were already gathering near the base of
the steps, drawn by the lure of a female in the clutches of her
mating instinct. They looked tense, hungry; ready to compete for
the pleasure of a woman who needed sex, whose scent would be an
aphrodisiac to any male werewolf.

She shifted nervously on the stool, her eyes
drawn to the small knot of men who were poised, waiting for the
bartender to deliver her drink. She knew she’d be pounced, he could
see it in her eyes as they darted around the room. She’d be
chased.

He wondered, perhaps with a bit of jealousy,
who would catch her.

Her gaze clashed with his, and Connor raised
his drink in salute.

She blushed. She actually
blushed
as she turned away
and stared at the counter again. The bartender returned, her drink
in hand, and Connor could see the tense set of her shoulders as she
watched him place the glass in front of her. Her hands shook a
little as she slid her credit card across the counter and accepted
a small, magnetic key to one of the upstairs rooms in
return.

More than just the werewolves were watching
her now. A kamikaze almost always guaranteed a good show, no matter
how shy or plain the woman. She seemed to feel the pressure as she
wrapped her fingers around her drink. She lifted it to her lips and
hesitated for a heartbeat.

Then she drank the entire thing in one gulp.
Someone in the crowd cheered loudly enough to be heard over the
music, and someone else let loose a piercing catcall.

Connor watched as she hastily shoved the key
in her back pocket and shot off the dais and away from the men
gathered around it, disappearing into the crowd. She was either
very nervous… or she wanted the chase.