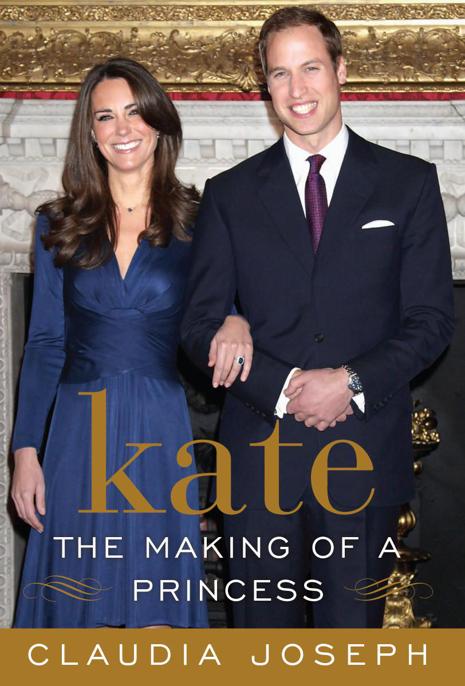 KATE
The Making of a Princess

To my parents, who gave me everything, and the man who gives me nothing but trouble

Chapter 23 - Back in the Royal Fold

Chapter 24 - Out of the Shadows

O
n 3 September 1660, in a mansion on The Strand overlooking the River Thames, a secret wedding ceremony took place between the Duke of york, the 27-year-old heir presumptive to the English throne, and his sister’s lady’s maid Anne Hyde. Performed during the night by the duke’s chaplain at her father’s home, Worcester House, and witnessed by only two people, the marriage of the future King James II and his heavily pregnant 23-year-old mistress scandalised the royal court, which could not accept that a blue blood had married a commoner. After Anne’s death, on 31 March 1671, it was written that she ‘indeed shew’d both her witt and her vertue in managing the affaire so dexterously, that the duke, overmaster’d by his passion, at last gave her a promise of marriage some time before the Restoration’. Anne had earned her place in history as the last commoner in this country to marry a king, and she had produced two daughters, Mary and Anne, who would rule the country.

Since that time, Britain’s monarchs have rarely veered from the accepted convention of marrying into European royalty, although there are two notable exceptions: the late Queen Mother, Lady Elizabeth Bowes-Lyon, and Prince William’s mother, Lady Diana Spencer. However, both had aristocratic families, and Queen Elizabeth was never expected to become royal consort; it was only after the abdication of Edward VIII that her husband, George VI, became king.

Now, for the first time in 350 years, another commoner has won the heart of an heir to the throne. When Kate Middleton marries Prince William Arthur Philip Louis Windsor, who is currently working as an RAF search-and-rescue pilot, she will become the first non-aristocrat to marry a future king of this country since the seventeenth century.

The marriage will breathe new life into the monarchy as the Queen enters the twilight of her reign, bringing new blood and a fresh perspective to an institution that faces criticism for being elitist and out of touch. William and Kate have a thoroughly modern relationship – they met as students at St Andrews, where they lived together, and dated for the rest of the decade.

It was on 7 April 2002 that Kate first graced the pages of a British newspaper, having modelled a diaphanous dress on the catwalk during a charity fashion show at St Andrews. Since then, she has become a permanent fixture in the society pages, a style icon – she regularly makes best-dressed lists both in this country and abroad – and one of the most photographed women in the country. The editors of magazines including
Vogue
,
Tatler
and
GQ
have waxed lyrical about her youth, fashion sense and appeal, and
Hello!
estimates that her image on the cover increases sales by 100,000.

Thousands of words have been written about her, hordes of paparazzi follow her every move, fans blog about her on the Internet and she is regularly discussed on radio and television. She even inspired author Peter york to update
The Official Sloane Ranger Handbook
and has her own unofficial fan club.

Yet, despite the reams of coverage, Britain’s future queen remains something of a mystery. So who is the woman who once so memorably retorted: ‘He’s so lucky to be going out with me!’ and does she share the same gifts of ‘witt’ and ‘vertue’ as her predecessor?

L
ying in her wooden and gilt bateau lit in her opulent bedroom below the state apartments at Kensington Palace, four weeks after her 18th birthday, Princess Victoria was woken by her mother, the Duchess of Kent, to be told that she was Queen of England. It was 6 a.m. on 20 June 1837 and her uncle King William IV – who had no legitimate children – had died of heart failure and pneumonia at the age of 71, leaving Prince William’s great-great-great-great-grandmother to inherit the throne.

Queen Victoria went on to become the longest-reigning monarch in British history and head of a vast empire, marrying her cousin Prince Albert of Saxe-Coburg-Gotha and bearing nine children, from whom both Queen Elizabeth and Prince Philip are descended. The family split their time between Buckingham Palace (Victoria was the first monarch to live there), Windsor Castle, where heads of state were entertained, and their holiday homes, osborne House on the Isle of Wight and Balmoral Castle in Aberdeenshire, both of which Victoria and Albert bought after their marriage.

At the other end of England, 290 miles from the royal court, in a cramped cottage in the Newcastle suburb of Byker Hill, life could not have been more different for Kate Middleton’s great-great-great-great-grandmother Jane Harrison, a miner’s wife.

While Queen Victoria was mistress of all she surveyed (and a great many parts of the world she had never even seen), Jane’s husband James, 41 in the year of Victoria’s accession, enjoyed a considerably narrower view. He earned a pittance working down the mines, while Jane juggled the demands of running a large household on a straitened income, bringing up four children and nursing a fifth. The eldest daughter, also Jane, sixteen, helped with her younger brothers (Thomas, nine, James, seven, two-year-old John and the baby, Septimus), but their mother would not have had any time for relaxation and the news of the King’s death – which she would have learned about through word of mouth, because Jane, like so many of her peers, could not read or write – would have had little impact on her world.

By piecing together historical documents and records, it is possible to construct a picture of Jane’s life during the early Victorian era. Her whole world would have revolved around the shift patterns of her husband, who worked as a shifter, or maintenance worker, repairing the horseways and other passages in the mine at Byker Colliery, then owned by Sir Henry Lawson.

James was employed under a bond by Sir Henry, which meant that he had been given two shillings and sixpence (about one hundred pounds in today’s money) for promising not to work for another colliery. Despite this, he was not guaranteed employment, but at 41 years old he would have been considered well beyond his prime and would not have complained. He was lucky to have work at all, especially with so many mouths to feed.

Thomas followed his father into the mine as a trapper. Working for up to 18 hours a day, in solitude and complete darkness, he was responsible for opening and shutting the mine traps, or doors, when the underground trams passed, in order to maintain ventilation. Later, Thomas became a driver, steering the horses that pulled the sledges and wagons from the crane to the shaft of the pit, and his younger brother James followed him into the mine. Despite the hardships – men and boys worked round the clock, except on Sundays, Christmas and Easter, and were liable for arrest, trial and imprisonment if they broke their bond – the family must have counted its blessings.

Life down the pit was brutal and dangerous, and in those days there was no sick pay or compensation for death or injury. While the owners supplied the pit ponies, the miners had to provide their own equipment, including picks, shovels, candles, ropes and explosives. The miners worked in gangs in order to protect themselves from thieving, and fights regularly broke out between rival groups.

Such skirmishes aside, the daily danger of mine working tended to unite the communities. Any report of an accident would mean that the women in the area would gather at the pithead, anxious for information about their men. It was a tradition that would last well into the twentieth century, when pit disasters, although much rarer, were by no means eradicated.

In James Harrison’s time, though, the dangers of working underground were ever present. Records indicate that there were more than 30 mining disasters in Durham and Northumberland in the nineteenth century, in which 1,500 men and boys were killed. Of course, these were only the major incidents. Individual deaths were commonplace but are more difficult to quantify, as the death of a single collier barely merited an inquest. Not only were there fires, rockfalls and explosions in the mines, but many pitmen were crushed to death by the trams (four-wheel carriages that carried corves, or tubs, of coal), kicked to death by ponies, fell down shafts or were drowned.

Life was hard for women, too. In Victorian England, they were deemed chattels of their husbands and would have to behave as such. With no hope of contraception, Jane Harrison was almost constantly pregnant. Her sixth baby, a daughter Margaret, was born in 1839, the year after Victoria’s glittering coronation at Westminster Abbey. Jane and her eldest daughter would have spent their days cleaning their sparse home, a tiny single-room cottage with an open fire and a ladder to the loft, where the children slept. They drew water at a street pump, washed, darned and mended ragged clothing, cooked for the family on the open fire and heated water in a tin bath for James and his sons when they finished a shift. The little food they bought came from the local ‘tommy shop’, the name deriving from the coarse bread that eighteenth-century soldiers received in their rations. Tommy shops were run by the owners of mines. Workers were often given some of their pay in tokens that could be used only in the shop, and the prices were inflated. Thus, mine owners made even more profit out of their employees, who often fell into debt. The family sometimes supplemented their meagre income by working in the fields, picking fruit, potatoes or turnips.

The Mystery of the Gold Coins by David A. Adler
Harraga by Boualem Sansal
Crazed (Se7en Deadly SEALs Book 3) by Alana Albertson
A Single Thread (Cobbled Court) by Bostwick, Marie
BadBoysSubBlankEditionHTML by Erika Masten
The Reluctant Bachelorette by Rachael Anderson
Counted With the Stars by Connilyn Cossette
A Day to Die For: 1996: Everest's Worst Disaster - One Survivor's Personal Journey to Uncover the Truth by Graham Ratcliffe
Mate of the Alpha by Marie Mason
First Among Equals by Jeffrey Archer