Keepers of the Flame (Trilogy Bundle) 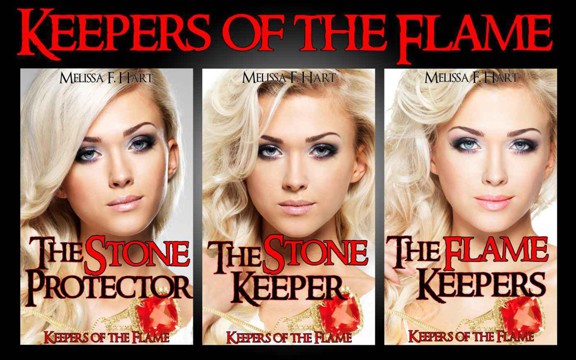 Keepers of the Flame

No part of this book may be replicated, redistributed, or given away in any form or by any electronic or mechanical means, without the prior written consent of the author/publisher.

Books in the series

Keepers of the Flame - Trilogy Bundle

A few months to her 17th birthday, Luanne Kylor begins to experience weird attacks. When she’s almost killed at a shopping mall, her grandmother decides that enough is enough and hires a bodyguard. Even though she’s immediately attracted to Dylan, a bodyguard is the last thing she needs as she’s trying desperately to blend in.

What most people don’t know is that Luanne belongs to a family of vampires. But not just any vampires; they are known as the BORN breed because they were born into their heritage. They are a sort of vampire evolution and Dylan is a member of the Protector Order of the BORN breed.

Forging a tentative bond, Luanne and Dylan come together and both face those that have been haunting Luanne for over four years. They had murdered her entire family and now they’re after her. Survival has suddenly turned into a very dangerous game. Will Dylan succeed in saving her or will she have to look inward and find the strength to save herself? What is her connection to the stone in the pendant around her neck?

After a hectic year when she comes close to death, Luanne Kylor is finally getting her life back in order. She’s a few months from her 18th birthday and is a freshman in the nearby college. She has finally managed to blend in and would pass for any other young woman on campus. But Luanne is different. She is a BORN vampire; that evolved breed of vampires who were born into their heritage and are as close to mortal as a vampire can get.

Just like most young women, she’s in love with Dylan. The only problem is, after they exchanged one kiss, Dylan has kept his distance from her. Several phone calls later, she’s finally decided to move on and start dating. Only Dylan has something to say about that and Luanne’s date turns violent.

In the midst of all the drama, her grandmother is abducted. Once again, the stone pendant Luanne wears is the answer to the mystery. Together, she and Dylan set out on a journey back to England, the country of Luanne’s birth in order to rescue her grandmother, and discover why the stone is of such importance.

Luanne and Dylan are finally in
London at the headquarters of the Order of the Protectors, one of the orders of the BORN vampire breed. They are on the trail of a rogue vampire who abducted Luanne’s grandmother. They are attacked almost as soon as they get to London this puts a strain in their newly blossoming relationship.

After receiving a text message, Luanne decides to go after the rogue vampire on her own. The trail leads her to her former home, where her whole family was murdered. As she faces a familiar enemy, she also has to face an old fear and trust a new love.

Luanne gets to realize the power of love and with that, she reclaims her ability to trust. With her memories of her family, she finds the power to defeat the enemy and embrace her true calling.

Luanne stood at the curb in front of the shopping mall and fiddled with her cell phone. She'd shared a car with her grandma today, since they'd been going in the same direction and she was waiting for her to pick her up. She pursed her lips and stared at the message she'd received from her best friend, Claire. She was still trying to make sense out of it when the pendant on her chest began to grow warm. All her senses went on alert as a thin thread of apprehension shot down her spine. She lifted her head sharply to search around for the danger but before she'd fully lifted her head a dark figure came at her with such speed that those who witnessed it saw only a blur.

Acting instinctively and with no time to think, she leapt into the air with equal speed and held out her left hand in a protective gesture at the same time. Twin darts of fire shot from her palm, engulfing the dark figure. The last thing she saw before that figure disappeared were the gold capped pointed incisors.

Dropping down to her feet, her heart pounding with fear and adrenalin, she was grateful to see her grandma pull up in her silver Lexus. She looked around quickly before she pulled the door open and it still baffled her that everyone was going about their business like nothing had happened.

“Hi Katrina,” she mumbled as she slipped into the comfortable leather seats of the car.

Luanne stared out the window as they left the shopping mall behind. Her grandmother's voice was carefully modulated and sounded pleasant, but she knew Katrina was trying hard to conceal her fear and she didn't want to contribute to that. Still, she couldn't not tell her what had happened. “There was another attack. This time I saw the person, not the face or anything, just the teeth.” She turned to look at her then and said quietly, “It was a vampire.”

Katrina didn't say anything but she noticed her hands had tightened on the steering wheel and her normally porcelain complexion was even more white than usual. Luanne used the opportunity to study her grandma, not for the first time. Looking at her smooth features and lustrous red hair, it was almost impossible to believe that the woman was her dad's mom. She did not look a day over thirty and it had nothing to do with cosmetic surgery and everything to do with her heritage. She cast blue eyes on her granddaughter before returning them to the road.

“You can't continue this way, Lu,” she said softly.

Luanne knew what she was talking about. Her heart was still pounding from the recent attack and it was only one in a long line of several since she'd turned sixteen a year ago. She absently fingered the stone in the pendant, which was hidden beneath her pink tank top. “I don't know what to do.”

“Don't worry about it, baby.” She reached out and patted Luanne on her bare knee. “We'll get through this.”

Just like they'd gotten through other stuff. Katrina didn't say it but she heard it loud and clear. “But why me? Why do they target me this way?” There was a noticeable thread of despair running through her voice.

Katrina was silent for a moment. “How did you get rid of this one?” she finally asked, not answering the question.

Her grandmother turned to look at her and there was shock in her eyes. “Did you just say fire?”

Luanne nodded. “I lifted my arm and fire came out of my hand.”

Katrina turned back to the road and focused on her driving. It was clear that there was a lot going on in her mind. She looked troubled. “Do you have any idea how that happened?”

“OK. That's great.” She nodded slowly. “So did you find what you were looking for at the mall?”

Luanne lifted one finely arched eyebrow at the abrupt change of subject, but knowing her grandmother, she'd already shifted gears. “Yeah, I did. But I'm not sure I want to spend all that money on a dress.”

Katrina sighed delicately, “I don't understand you, Lu. It's almost as though you don't have my genes running through you. You have all that money, yet you won't spend it. I've never met a teenager as frugal as you are.”

She carefully hid her thoughts and smiled at her grandmother. “Just because I don't subscribe to retail therapy doesn't mean that I'm frugal.”

Once again her grandma took her eyes off the road to glance distastefully at Luanne's outfit of shorts and a tank top. “Look at you, Lu. You're beautiful—stunning, actually—since you take after me.” Her eyes twinkled at that, then she turned back to the road. “But you don't even make an effort. No makeup, no pretty clothes, nothing. It's almost as though you're in mourning.”

When Luanne remained silent, Katrina flashed her a quick look before swinging the car into the parking spot in front of their eighteenth century townhouse. Switching off the engine, she turned to face her granddaughter with a somber look. “You still miss them, don't you?”

Luanne glanced outside and stared at the manicured lawn of their neighbor's home. She felt the usual pressure in her chest which accompanied that topic and wanted desperately to escape. “I don't want to talk about it, Katrina.”

“You've kept it inside you for the past three years, Lu. Don't you think it's about time you talked about it?”

Feeling the tightness increase in her chest she turned pleading eyes to her grandmother. “Please, just leave it, Grandma. I'm not ready, I don't want, I can't...” Taking a deep breath she tried to push back the rising panic and tried again. “I'm just not ready.”

High-Society Seduction by Maxine Sullivan
Disarranged by Wolf, Sara
EllRay Jakes and the Beanstalk by Sally Warner
Halt's Peril by John Flanagan
Death Has a Small Voice by Frances Lockridge
A Biscuit, a Casket by Liz Mugavero
Witch Finder by Unknown
Raven Mocker by Don Coldsmith
Anne Douglas by The Wardens Daughters
Taken By The Karate Instructor by Madison, Tiffany