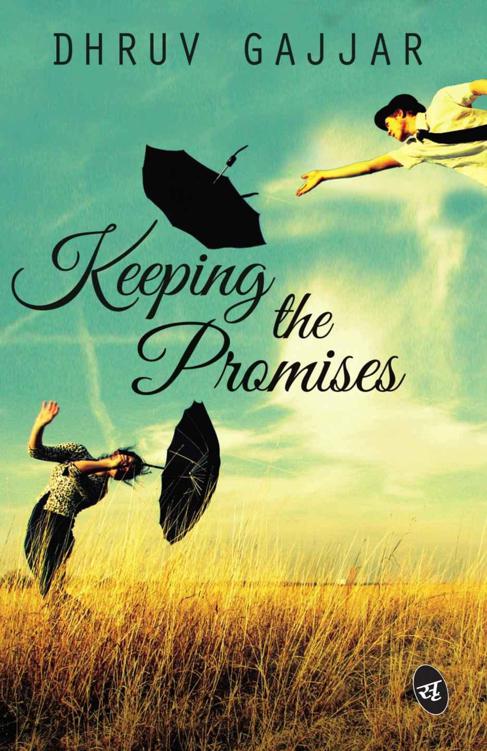 This is a work of fiction. The characters, places, organisations and events described in this book are either a work of the author’s imagination or have been used fictitiously. Any resemblance to people, living or dead, places, events or organisations is purely coincidental.

The author asserts the moral right to be identified as the author of this work.

All rights reserved. No part of this publication may be reproduced, stored in a retrieval system, or transmitted, in any form or by any means, electronic, mechanical, photocopying, recording or otherwise, without the prior written permission of the Publishers.

Preview:
Everything We Had

W
hat comes to your mind first and foremost when you think of the greatest thing you’ve done for someone you love? There are so many books written on love, numerous romantic movies made on it. But can love stories ever be squishy and tragic at the same time? Well, yes. At least for us it was. Dhruv – once a naive schoolboy, who grew up with me – has lived every shade of love, pain, sorrow and everything in between at the age when boys almost puke at the idea of committing to someone for the rest of their lives. I wasn’t around when he was fighting his life’s worst phase, but I’m happy to be around now, helping him get at his best again.

When he met me for the first time after years, he was not merely a boy who was my best friend or someone whom I could call my first love. He was a man who had lost his meaning and reason to live. He was not a person who’d spend hours in the gym pumping his muscles – though back in our school, he was impeccably handsome… having the physique of an athlete, with facial curves capable of charming and intimidating anyone of the opposite sex. I have no hesitation in admitting that I was one of them. I loved him then as much as I do now. Few – let’s say thirty odd extra pounds of his weight can’t alter my feelings for him. He still beguiles me the way he used to back then. He hasn’t changed from his heart and for that I will always be grateful to him. When I first met him after all these
years, his mind was empty – without any motivation, hope or goal. To sum it all, he was messed up. There was nothing in this world capable of keeping his interest, except a task – a task of writing and publishing his book. I wouldn’t be wrong if I’d say it was the only thing that was keeping him alive. It wasn’t easy for him to write about the person he loved, and will love for the rest of his life, whose name he could not mention. Writing about her meant envisaging the entire screenplay, to relive the moments which were blissful and afflictive at the same time. But he had me beside him – holding his hand whenever needed, wiping his tears whenever required, and living the moments with him while hearing his narration.

I am sitting at the Cafe Piano, TGB, the same restaurant where they used to meet. His MacBook pro and diary are placed on the table. We are not dating, not yet. I don’t think we can head towards a relationship just like that and pretend that nothing happened – especially after all that he went through. We can sense the growing affection towards each other, but we can’t go further with that, at least not now – not until he comes out of his despondent state of mind.

“So, finally you are starting it!” I say with a gentle smile in order to boost his confidence.

“Yes, but I don’t know where I should start from,” he answers, glancing at me with his confused, distressed face, whereas I’m sitting firm, smiling at him, and trying my best to help him fulfil his yearnings.

“Start it from the day you got to know about it Dhruv!” I suggest.

“Okay, let’s start,” he says and open his Mac; tears start rolling down from his eyes the moment he envisages the scene.

I
crumbled on the floor as I saw her, an instant fling with the floor apparently pained me, but it was nothing compared to the pain
looking at her caused inside. This was even worse than I imagined. She was lying on her bed, her body except her face was covered inside the white blanket. Her face was almost dry and pale, her glowing and well-nourished cheeks had wrinkled and dried too. Chemo sessions, that must be chemo sessions that had taken away most of her silky brown hair. She was still asleep.

So that’s what she was hiding from the past seven months.

That’s why she had asked for a break-up. She did not cheat on me. She was ill, and she didn’t want me to know. But why? Was I not worthy enough to know about it? Why did she keep it away from me? I could’ve helped her. We could have given her the best treatment in the world. After all, I belong to a family of doctors. I heard the sound of someone opening the door; glancing up, I saw her father standing. He gave his hand to me because I needed some support to stand up.

“What? But she is too young for that! No one gets it at the age of twenty!” I was digging my brain to pull out the little information I had about the disease.

“That’s where she was mistaken – by herself and by the local physicians,” said Ansh who came from behind along with M’s mother.

“You knew about this?” I snapped at him, with anger, of course.

“From the very beginning… In fact, everyone knew about it except you. Sorry bro, but I gave her my word like everyone else,” he said and hugged me.

“Tell me that she is going to be fine, Ansh!” I didn’t want his consolations; I wanted some answers, some assurance.

“I wish I could Gajju, but the fact is that she doesn’t have much time left. She reached the final stage four months ago,” he said, staring at his toes.

“What? That’s impossible! No one can die in just seven months in any cancer! I’m calling my brother. We’ll give her the best treatment
in this world. She cannot die. She is going to live, she will have to!” I squeaked in pain. No one reacted; my outrage was righteous and expected.

“Not just seven months Gajju! She had it for one year before she was diagnosed. Besides, she has given up. She could have undergone surgical treatment or the radiation therapy, but refused to every alternative,” he said with teary eyes.

“What? But why?” Tears had no destination and kept falling down, from not just mine but everyone’s eyes…aimlessly, like a monsoon shower or dew drops of a frosty December morning.

“Neurofibrosarcoma has been a curse to our family. My father died with the same disease, even after having two limb surgeries. Before him, his two brothers and my grandfather too faced the same fate. At that time, we didn’t even know that it was something called neurofibrosarcoma. And they died in their fifties. I thought that the affliction of the disease was over when I didn’t have it, but…” M’s father choked with his words. Though I knew little about Neurofibrosarcoma, I knew it could either be due to an unidentified cause or genetic. He took a gulp before finding his voice back. “She said she wanted to end the death streak here. We tried to force her a lot, but she was firm in her decision. She did not want to take this disease further. She is the youngest victim of this disease in our family. She saw it as an opportunity to end that torment here. She believes that she has sacrificed her life in this, but has saved many.” I looked at Ansh with an overwhelming realm of pain in my eyes.

“Why Ansh? For god’s sake, why M?” He embraced me as he heard this.

“I wish I had an answer to this, my friend.”

There was a dark silence. I did not have anything more to question, they did not have anything to answer. Just then, she moved her head a little. Everyone else, knowing that it was my time to be with her,
left the room. I quietly sat beside her, ran my hand on her almost bare forehead. She was true to her words about recognizing my touch even in her deepest sleep. She did, slowly. When she opened her eyes, I saw that the twinkles were still there; nothing, no cancer or chemo sessions could take that away.

“Hey beautiful!” I smiled with wet eyes. She broke into tears as she saw me. Maybe she’d noticed that her handsome hunk had turned into a fat pig.

“What have I made you, Mithu!” Hearing that word always made me smile and that day was no exception.

“Nothing baby, just gained some weight. As you lost some hair,” I said and caressed her greyish hair.

“I was wrong. I thought you would move on. Dad told me I was wrong…I should’ve listened.”

“Hey M, shhh!” I put my right index finger on her still pink panoptic lips. “Let’s not talk about that! See, I’m with you now. That’s the only thing which matters,” I rubbed my hands on her forehead, wiped her tears which were back in no time. I wiped them again and they came back, again. Finally, I was the one to give up the effort and lost the battle with her tears.

Opening Atlantis by Harry Turtledove
Blue Moonlight by Zandri, Vincent
Mistletoe Menage by Molly Ann Wishlade
Always Forever by Mark Chadbourn
Always You (A Magnolia Falls Novel) by Ruth Roberts
Hue and Cry by Patricia Wentworth
Katie and the Mustang, Book 3 by Kathleen Duey
Losing Control by McClung, Mila
The Shadow Club by Neal Shusterman
Academia of the Beast: A Dark Retelling of Beauty and the Beast by K.N. Lee