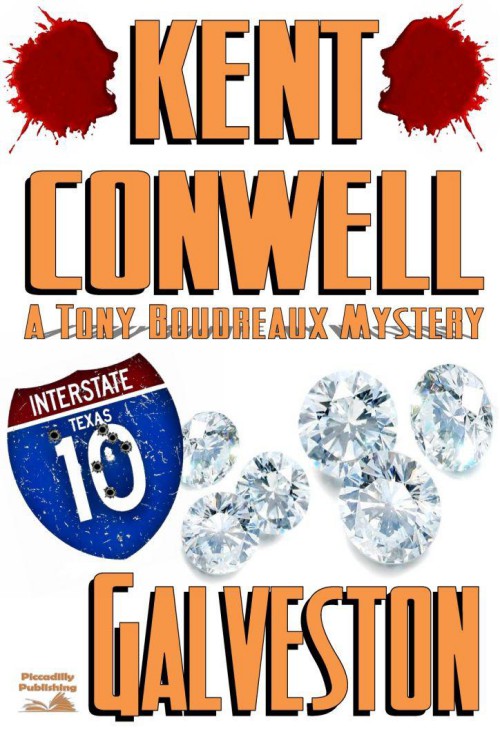 They say being forewarned is forearmed. Perhaps, but given a second choice, Tony Boudreaux would never have pulled off I-10 to visit his old friend, Detective Ben Howard, in Galveston. Instead, he would have continued his journey to his home base in Austin, Texas.
But on impulse, the newly licensed PI headed for the island city where within hours, he is accused of shooting his friend and murdering a cop he had once threatened.
In his efforts to clear himself, he stumbles into the middle of a diamond smuggling caper on the Galveston docks. The players involved are some of the most powerful bosses in the underworld. From Houston to Philadelphia, word goes out to stop him. He only has hours to prove his innocence before he is measured for a new pair of concrete boots.

They say being forewarned is forearmed. Perhaps, but given a second choice, Tony Boudreaux would never have pulled off I-10 to visit his old friend, Detective Ben Howard, in Galveston.

But he does, and within hours he is accused of shooting his friend and murdering a cop he had once threatened.

In his effort to clear himself, he stumbles across a diamond smuggling caper on the Galveston docks involving some of the most powerful bosses in the underworld. From Houston to Philadelphia, word goes out to stop him. He only has hours to prove his innocence before he is measured for a new pair of concrete boots.

And to make matters worse, he discovers one of the players is his significant other’s long-lost cousin. 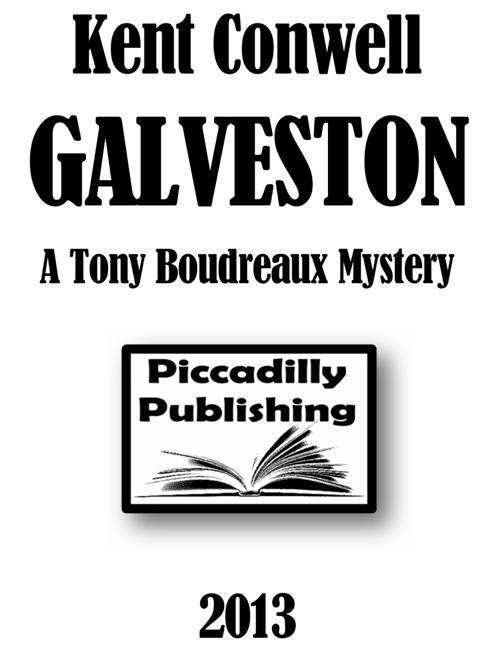 First published by Avalon Books in 2003

Names, characters and incidents in this book are fictional, and any resemblance to actual events, locales, organizations, or persons living or dead is purely coincidental.

All rights reserved. No part of this book may be reproduced or transmitted in any form or by any means, electronic or mechanical, including photocopying, recording or by any information or storage and retrieval system, without the written permission of the author, except where permitted by law.

Published by Arrangement with the Author.

I was reared in the bayous and sloughs of Louisiana so on occasion, I have had to study a moment on the proper fork at a formal dinner, but that doesn’t mean I’m a naïve bumpkin who believes the perfect means to ensure an unforgettable evening is to kill a cop, especially if he is the cop I had once threatened in front of witnesses.

But, that’s what everybody thought.

And the truth was, I didn’t know if I could prove them wrong or not.

I’d been out strolling a deserted wharf that night with Ben Howard, former Austin PD detective. I suppose a person might shiver at a sprawling, empty wharf enveloped in a thick layer of fog. Certainly, the hollow click of heels on concrete, the mercury lights that were ghostly dots in the thick moisture, and the moaning foghorns echoing across the bay added to the ghostly ambience of the night.

For me, it was a pleasant walk. Nothing ghostly, nothing spooky, nothing at all.

You want to talk spooky, then you pole a pirogue through the Atchafalaya Swamp during the dark of the moon and listen to the gurgle of water displaced by the alligators swimming alongside and rustle of leaves in the overhanging limbs as snakes prowl for their next meal.

Why Ben chose the Galveston docks for an after dinner stroll, I had no idea. But I was his guest, and my mother brought me up to respect the wishes of my host. Personally, I would have chosen the bright lights and gay laughter of the Strand, Galveston’s answer to New Orleans’ Bourbon Street and Austin’s Sixth Street.

The muffled rumble of an engine and the clashing of gears cut through the thick silence. I shrugged deeper into my jacket and peered into the fog. The shadowy phantom of a concrete truck emerged from the fog and drove past us.

“Yeah.” I glanced in the direction from which the truck had come, expecting to see the diffused glare of construction lights. All I saw was more fog.

We continued our aimless strolling, bantering over old days back in Austin. A few minutes later, we spotted the fuzzy outlines of two towering shore cranes silhouetted against the diffused glow of lights. They looked like hulking buzzards.

Beyond came the faint clatter of metal against concrete and a few muffled voices. A couple shadows appeared, and then the sound of running feet faded into the fog.

“Somebody else working late,” Ben muttered.

Before I could reply, four shots rang out, their reports muffled by the fog. I glimpsed the four bursts of orange beside one of the cranes.

Ben Howard grunted, jerked backward, and spun to the ground. “Christ, What the … ”

I dropped to my knees beside him, then glanced in the direction from which the shots had come. A shadowy figure raced through the fog toward us.

Muttering a curse for leaving my .38 in my motel room, I jammed my hand inside Ben’s coat for his service revolver.

Two more shots broke the foggy silence. A slug ricocheted on the concrete at my feet. I swung Ben’s Smith and Wesson around at the charging figure and pulled the trigger.

I cursed again, remembering he preferred a single action. Hurriedly, I thumbed back the hammer and fired. In the next few seconds, I sent three more slugs into our assailant. The 240-grain slugs spun him around and sent him reeling to the wet concrete.

Keeping the revolver trained on the dark figure sprawled on the concrete, I nudged him with my toe. He rolled over, and his arms flopped out to his side. His eyes stared unseeing into the thickening fog. I frowned. He looked familiar. I bent over, my heart thudding against my chest. My eyes bulged.

A moan from Ben Howard jerked me from my daze.

I knelt at the detective’s side.

He coughed and looked up at me. “I shoulda known … known better than go anyplace with you, Boudreaux. You was always bad luck.” A spasm of coughs racked his body. Blood, black as death under the ghostly streetlights, dribbled from the side of his lips, and he went limp.

Running steps sounded through the fog.

I shouted. “Call an ambulance. Two guys have been shot.”

As the footsteps faded in the distance, I looked down at Ben Howard. For a moment, I considered getting the blazes out of there. I shifted my gaze to Frank Cheshire. If I had to shoot someone, why did it have to be the only cop I’d threatened to kill, and in front of witnesses? It had been long ago, but cops never forget.

I felt Ben’s carotid. His pulse was strong. I did my best to plug up the leaking holes in him, and then I sat at his side on the wet concrete and waited for the inevitable.

The local uniforms were enraged. One of their own had been wounded, and another had been gunned down. They grilled me mercilessly, but after a couple hours, they sent me back to my motel with orders to not leave the island.

Earlier, I had met Ben Howard at the police station and ridden with him down to Gui Lee’s Steak and Pizza Emporium on the Strand, so my old pickup was in the parking lot at the station.

I swung by the hospital. Ben had just been moved from emergency. For the moment, he was stable. I breathed a sigh of relief. “Thanks,” I told the ER nurse. “I’ll check back in the morning.”

A cruiser followed me all the way back to the motel. I brushed it off to police routine.

I slept in snatches, unanswered questions tumbling through my head. What was Frank Cheshire doing on the wharf so late at night? And why did he try to kill us? Or was it all a mistake?

Regardless of how thoroughly I plan, something always seems to go wrong.

I wouldn’t have found myself in the mess with Ben Howard if I hadn’t paid a short visit to my mother and my grandmother in Church Point, Louisiana. And I wouldn’t have made that trip if I hadn’t solved a big murder case in Stafford, Texas, just outside of Austin, a case that earned me a promotion, a $5,000.00 bonus, and a week’s vacation.

Two days before my vacation was over, I headed back to Austin. I had no intention of visiting Ben Howard, but on impulse, I detoured off I-10 to Galveston, deciding to drop in on my old friend, a former Austin PD detective who now worked for the Galveston PD. We could have a fast dinner, and I’d be back on the road.

Galveston was farther off I-10 than I figured, so by the time I reached the island city, I had decided to spend the night. I found a room at the Sea Gull Motel on Seawall Boulevard.

Ben and I had worked a couple cases together over the last two or three years in Austin. He was a crusty, irascible curmudgeon, but he was fair, and he had an intuition that pedestrian PI’s like me salivated over.

He was wearing a harried look when I first spotted him in the squad room earlier in the day. When he saw me, he grinned. He seemed to be genuinely pleased to see me.

Later, we had a leisurely steak dinner at Gui Lee’s Steak and Pizza Emporium. That’s when he told me of the trouble that was set to blow Galveston Island into a prime candidate for gang war.

Gui Lee’s was crowded with laughing, carefree customers who savored the cuisine and appreciated the quality of the champagne. After my last bite, I patted my stomach. “I could hit the sack right now.”

Ben chuckled and touched a match to his cigarette. He leaned back in his chair. “I can’t remember the last time I got to bed before midnight since I got here.”

He snorted and gulped a swallow of Budweiser. “Be glad you’re in Austin, Tony. This place is fixing to get busier than a call girl at a political convention.”

When I frowned, he continued. “We’re tiptoeing a fine line between a gang war and peace.”

I leaned back and stared at him, thinking he was pulling my leg. “Gang war? Today?”