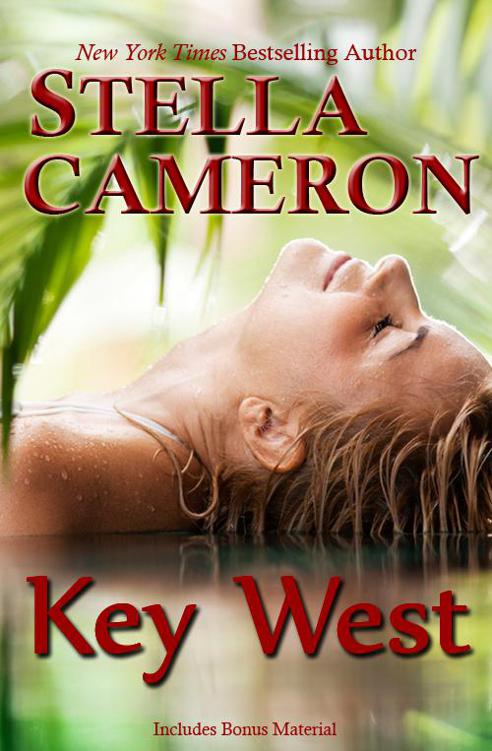 Any similarity to actual persons or events is purely coincidental.

Jerry Cameron—Thank you for marching the streets of Key West with me and for being patient when I made that march again, and again.

Island City Flight Service—You coped so well with the weird questions—even if you did laugh! And you stopped me from making a fool of myself. Thank you.

Mike and Mae Nunn—I’m grateful you’re hooked on fabulous cars. You gave me so many ideas.

Applause for the folks who bring us Key West Sunset, even when it doesn’t…

And Key West. What an island, what a history, what a wild and wonderful present. You are irresistible.

Tropical wind in the night reminded her of times when she’d made the mistake of pretending to be happy, safe, although she’d known she was fooling herself.

That kind of wind slapped banana leaves against the jalousies and sent warm, frangipani-scented air across the skin. Lulled you—even in hurricane season. Mostly the big storms never really hit, but eventually one did. Even if it was a long time coming, you could take one thing to the bank another hurricane
would
hit Key West. And the less prepared you were, the more devastating the onslaught.

Sonnie Keith Giacano’s personal storm had arrived eight months ago, on just such a wild night. It had changed her forever. She hadn’t expected what happened, and she’d almost snapped under the horror of it. But driven by her need to discover the truth she was convinced had been hidden from her, she’d started the long trail back from despondency. That trail had led her here again, to Key West and the place where everything she’d like to forget had taken place.

It’s over, Sonnie. You can’t go back. You can never go back.

Maybe she should have sold the Key West house. There was nothing here for her anymore. Never had been, other than during the few weeks of euphoria before she’d told Frank about the baby. His career had been slipping for some time. With each tournament he was convinced he would win again, only to go down to one more early round elimination. Sonnie timed her announcement for his return to Florida after the latest Wimbledon defeat—another step downward toward public oblivion for Frank Giacano, former wonder boy who lived for the flash of the camera, the adoring crush of the fans. That visit—and rapid departure—had happened only weeks before Frank had sent an unexpected message telling her to be ready for him to come home again because they had to talk.

On the first occasion, she had waited for him, hopeful that her news about the baby would transform him, make him want to spend time with her, give him a reason to see there was more to life than tennis—and the people who were his friends because of tennis, rather than despite the game. He’d been rich before he’d won his first title, and he’d at least quadrupled his fortune in the twelve years he’d been at the top. But all that had changed, had begun to change even before Sonnie met him. The more defeats he suffered, the faster he lived and the more he spent—or lost at the tables to dealers who saw him more often than his wife did. Get out now, was what Sonnie had asked him to do. Get out and help her make a family, a real family. And give the two of them a chance to be what they’d never been a husband and wife who knew and liked each other, and not just in bed.

Frank had listened to her, so silent she’d talked faster and faster, babbled, broken into bursts of laughter, until she stopped, breathless, and as silent as he.

Later that same day he’d left again. “Take care of yourself,” he’d said. “I’ll be in touch. Sorry I can’t be better at this sort of thing,
cara,
but I am not the domesticated man. And, well—he made one of the eloquent hand gestures that had once so captivated her— what can I say? I do not find pregnant women sexy. You would not want me here, looking at you, and knowing I was wishing you were...otherwise.”

Sonnie had been unable to answer him.

“I’ll contact you. And I’ll be here at the right time for the doting-papa pictures. The press will help me make them so touching. And the fans, they will love that.”

He had gone, had not so much as called for two months. Then he’d surprised her with his announcement that he was returning, that she should make herself available to help him with some business matters. He had not even asked how she was, or how the baby was.

Sonnie remembered his voice as it had sounded on the phone that last time, and narrowed her eyes. So cold. “Be at the airport.” He meant he’d be coming in on his private plane. “I won’t have much time.”

She’d tried to forget the anger she’d felt in his words.

Had that really been the last time she’d spoken to Frank?

Another gust of wind tossed leaves against windowpanes. “I just wanted you to love me—and the baby,” Sonnie said into the fragrant darkness. Two weeks ago she’d arrived back in Key West and made the parlor her safe place. Just once, on the day she first walked into the house, she had forced herself to go into every room. And she’d closed each door as she left. The doors were still closed.

If she were not so convinced of the need to surround herself with what had once been familiar, she would have left immediately. But she was convinced. If she was to grasp for pieces of a night she had blocked from her mind, she must be exactly where she had been when it began.

If she was to go on, to start living again, peace must be welcome in her head and in her heart—and in the places filled with an ache she had clasped so tightly she still couldn’t let go.

“She’ll come out of it. She’s young and that’s on her side. The young forget—even when they don’t think they will.”

Her father’s voice. Her mother’s. And big half-sister Billy’s—Billy, who still thought of Sonnie as a kid, even though she was twenty-eight and had the kind of ugly miles on her shoes that were guaranteed to make her real old inside.

Why couldn’t she remember the words, or when she’d last heard him speak to her? On the phone before he was to arrive, everyone insisted, yet she couldn’t be sure. Had there been another call? Why did she hear voices saying things they shouldn’t say, making threats, goading, promising the unspeakable?

Noises, always noises. Noises tore apart the words until they weren’t words anymore. She pressed her hands over her ears and said, “I can’t do this. I can’t.”

They were right—the doctors who spoke in whispers. She was losing her mind. Coming back to the place where everything she cared for had blown apart had seemed the one way to pull it all together again, but she couldn’t think long enough without the noises, and the voices, breaking in.

Sheer white draperies drifted over the windows, lifted by wind through the jalousies. Moonlight fingered a fuzzy blue glow between shadowy stripes from the shutters. Shifting, shifting.

The tears had turned to burning dryness months ago.

“These things happen. You’ll have more babies. You were only five months along. You’ll get over it. One day you’ll know I was right.”

They didn’t know how she felt. They didn’t know what she would or wouldn’t get over, or if there would be another child. And if there should ever be another child, the tiny girl who had slipped away that night wouldn’t cease to be Sonnie’s daughter. No one else knew, but she had named her Jacqueline, and inside a locket Sonnie wore around her neck were inscribed the name and the date of...just one date.

What really happened that night?

“High-speed crash. Distraught. The news was too much for her. Her brother-in-law had told her about Frank and she snapped. Pregnant woman, you know. Hormones. Poor kid. She’ll need a lot of TLC.”

And so they had talked on and on over her hospital bed, talked as if she weren’t there. She had withdrawn to a place where she heard snatches of conversation, but where she could be alone with the horror of all she’d lost, alone to think and to try to grasp what she couldn’t remember. Later the doctors had told her about the brain’s ability to wipe out events too painful to relive. She shouldn’t even try to recall the actual accident when her car had smashed, at high speed, into a concrete wall about a mile from the airport in Key West. The news her brother-in-law, Romano Giacano, brought and delivered when she’d expected to see Frank get off his plane had destroyed her delicate balance, and she’d fled.

So why couldn’t she accept what she’d been told in the hospital and start to move on?

That was why she was here: to convince herself that the story was true, that there was nothing else to know.

Holding her wrist to the moonlight, Sonnie saw that it was almost ten. She had an appointment. An appointment with a man she didn’t know, had never really met. And the man didn’t want to see her.

Maybe she didn’t want to see Chris Talon, either. From what she’d heard he’d been a hotshot detective once. He wasn’t so hot anymore. But his brother, who had given Sonnie a job she didn’t need except to force her out of this house, insisted Sonnie and Chris would be good for each other. Roy Talon said his brother was brilliant and would help her if there was help to be had. “And,” Roy Talon had said obliquely, “Chris needs a kick in the pants. Get his mind off himself for a change.”

Teacher's Pet by C. E. Starkweather
A Demon's Kiss (Young Adult Romance) by Marks, Melanie
To Wed and Protect by Carla Cassidy
Alien Dawn: A Classic Investigation into the Contact Experience by Colin Wilson
The Mad Lord's Daughter by Jane Goodger
Could It Be Forever? My Story by Cassidy, David
Hatchling (Tameron and the Dragon) by Lamb, Jean
The Firm by John Grisham
The Journey to the West, Revised Edition, Volume 2 by Unknown
The Power of One by Jane A. Adams