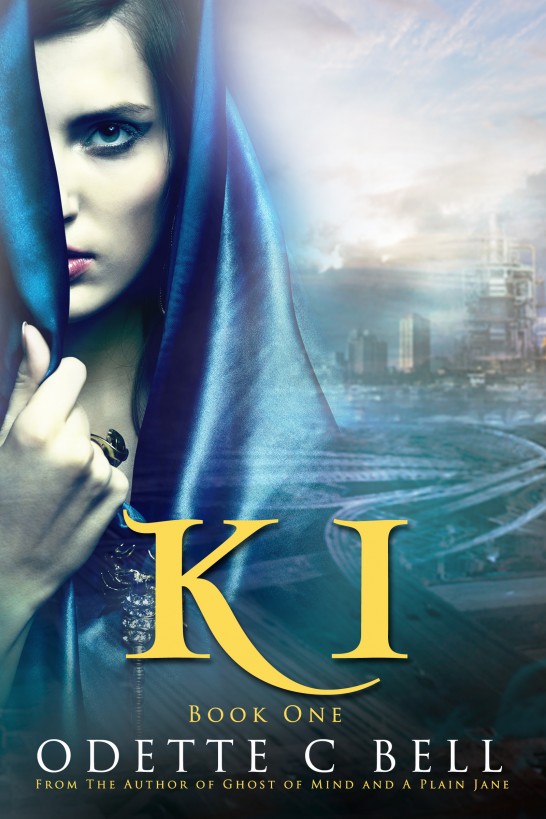 All characters in this publication are fictitious and
any resemblance to real persons, living or dead, is purely
coincidental.

For free fiction and details of current and upcoming
titles, please visit

For updates sent straight to your email,

The girl who fell into the clouds

Panic. It filled her. Ripping at her lungs
and heart like a wild animal coming in for the kill.

She tried to gulp at the air as it rushed
past her, but she couldn’t take in enough. Choking, gaping,
clutching at her throat, she felt her skin begin to numb.

Her hair whipped up around her, buffeting in
every direction as the wind took to it. Her wide, long sleeves
struck around her wrists, sounding like wet sheets slapping
together in a storm.

She saw the clouds as she punched through
them. Watched in wide-eyed horror as their water droplets brushed
by her face.

Below was the ground. The lakes and
mountains and plains. She saw flashes. Brown, hay-filled fields,
high, snow-capped peaks, deep, thick forests.

Her hands were frozen now. She had precious
few seconds to act.

The device – the lattice-like crystal – it
was her last hope.

Raising it to her face in her trembling
grip, she breathed onto it, translating the only warmth she could
still give over the surface of the sparkling contraption.

As she did, blackness drew in at the corners
of her vision. Colder than she had ever been, she felt herself shut
down. Eyes rolling back into her head, she saw one last thing
before she lost consciousness. The device lit up. The intricate
structure glowed like fire.

With the fire came the magic.

He was working in the field when he saw the
flash in the sky above. It was a clear day, with scant clouds
chasing each other across the horizon. Visibility was near perfect.
So he picked up that blue glint easily.

“
What the hell?” brow crumpling, he
shielded his eyes with his hand as he strained to get a better
look.

It had been years since he’d come back to
the farm, longer since he’d worked a full day in the fields. His
face was caked with sweat and his fingers were thick with grit, but
surely he wasn’t weary enough to be seeing things.

Flicking his gaze back to the farmhouse a
good 200 meters behind him, he figured there was only one thing to
do.

It wasn’t to go for help or the pair of
binoculars he’d spent a half-month’s pay on. Instead he turned back
to the blue glow.

Then he saw it. The explosion. A massive
blast of light shot out in a wave.

Though his mind had no idea what he was
looking at, his body knew what to do. All those years in the army
had paid off. He fell to the ground, slamming his hands over his
head, pushing his face as far into the dry hay as he could.

There was a single second of tight-chested
fear before the shock wave hit. It pushed against the hay,
flattening it and flattening him in a powerful pulse. The sound of
it boomed in his ears, then left nothing but a constant buzz.

Moments later the light came. A wash of it.
Moving slowly, less like light and more like water. He felt it as
it trickled over his skin. Though his body still shook from the
shock and force of the explosion, the sensation was
unmistakable.

It made him look up. Mouth opening, breath
nothing more than a quick and percussive pant, after a second of
instability he made his legs work and he stood.

The field around him was flattened. Nothing
burnt, nothing destroyed, but the hay that had been up around his
knees moments before was now no higher than a book. A thin one at
that.

Swallowing, forcing himself to slow his wild
heart, he tried to look for the impact crater.

He couldn’t find it. All he could see was a
blue glow, bright, but small. It was off on the edge of the
field.

It was also hovering.

Cheeks slackening, muscles in his jaw
twitching, he couldn’t believe what he was seeing.

He’d witnessed a lot in the army, but never
anything like this.

Natural curiosity taking over, he headed
towards it. He’d always gone tracking in the mountains with his
father. And every time he’d learned a new lesson in controlling his
fear.

“
Come on, Jackson, you have to find out
what that was,” he said. But he couldn’t hear a word of
it.

Cupping a hand to his ear, he tried to hear
himself speak again. All he picked up was a dull, monotone
drone.

Temporary hearing loss. He’d experienced
it once before when a Tarkan mine had gone off less than four
meters to his side.

But that war was long over. Wasn’t it?

It all depended on what had just exploded
at the bottom of the field....

Quickening his pace, he felt his chest punch
forward as he strengthened his core and steadied his gait. He cast
his gaze around for a weapon, but he knew there was little chance
of finding one. All his tools were back where he had fallen, and he
didn’t want to waste any more time.

It wasn’t until he reached the dip at the
edge of the field that he finally saw it.

More importantly, it was when he saw her.
The woman.

He almost fell over, knees buckling as the
shock of recognition shot through him.

He’d expected to see some kind of device or
at least a blast crater. What he saw instead was something he could
have never imagined possible.

A woman floating on a bed of blue light.
No, not floating, she was
stuck
.
Her body was suspended a meter off the ground, her face turned to
the sky. Arms spread, she was wearing a long robe-like dress that
fluttered in the wind, chasing around her legs, hands, and cheeks
in the breeze that always whipped through the field.

He swallowed, throat dryer than he’d ever
felt, neck tight with a tension that threatened to snap his head
off.

She’d fallen from the sky. Yet she wasn’t
some mass of blood and bone; with every breath that pushed at her
chest it was obvious she was alive.

Despite the shock, he forced himself to take
a step forward.

He’d never seen anything like this. A woman
stuck off the ground. A woman who had fallen from the clouds.

None of it was possible. Technology like
this did not exist.

Yet he had enough reason to realize he
wasn’t dreaming. His mind was clear; this was no hallucination.

After another bare moment of hesitation, he
reached out his hand.

With a single touch to her shoulder, he woke
her.

Her eyes snapped open, her body arching up
in a spasm.

Screaming, she clutched at her face, her
chest, her neck. She was alive. Dear god... she was
alive.

As her own cry ended, she heard someone
else’s. A stifled shout.

Snapping her head to the side, she saw him.
A man. Dressed in the ordinary garb of a farmer, he was tall with
clean cut hair and an open, handsome face. A face that was now
plastered with fear.

He was standing less than two meters from
her side, and down a steep dip. No... he wasn’t in a dip, she was
still in the air.

Cheeks paling, heart speeding up even
faster, she stared down below her.

She was about a meter off the ground,
seated on nothing but a bed of blue light.

Her mind raced to catch up to the
situation. She remembered falling, remembered grabbing at the
device in a last ditch attempt to save herself.

It must have worked. The blue light, the
rippling sensation of energy tracing up her skin from where she’d
held the lattice. It had worked....

“
Who are you? What’s going on?” the man
held up a hand as he spoke, but it was not a comforting move. It
was stiff, the fingers spread, the arm and shoulder locked. It was
a clear warning not to come any closer.

Who was she?
Who was he?
More importantly, where was she? Where had the
device taken her?

She crunched up into a seated position,
never shifting her gaze from him. It was clear she’d fallen into a
field, but that was where all clarity ended. Her mind still buzzed
from the fall, her body still hummed with the energy it had taken
to save her.

“
Who are you?” he asked again, the pitch of
his voice uneven.

“
Where are we?” she pushed back on her
hands, the blue light below as solid as rock. It would not let her
fall, not until she disabled the device or was fool enough to use
it again. And there was no way she was going to do that.

His cheeks stiffened at her words, the
bridge of his nose creasing. He looked confused. Dipping his head
to the side, he brought a hand up to his ear. “Who are
you?”

“
Please, just tell me where I am,”
clutching onto the device as tight as she could, she pulled her
sleeve over it, hiding it from view. “Which province is this? Am I
still in the Empire?”

That crumpled look of confusion remained on
his face until a single word ignited him. Empire.

He straightened up, any hint of fright
replaced with clear aggression. “You’re from the Tarkan Empire?”
again his voice pitched up and down erratically as he all but
shouted at her. Was he deaf? Was that why he kept cupping a hand to
his ear?

Or was he just very, very angry?

He took several steps forward, reaching the
blue symbol underneath her. From the look on his face to the exact
tension of his stance, it seemed he was ready to grab her out of
the air.

She moved back instinctively, scuttling like
a Tarkan crab, right to the edge of the light. If she moved any
further, she would fall off it.

“
You’re a Tarkan weapon,” he snapped. That
once-open face of his closed off. The clean line of his jaw dipped
down, shadows pooling under his brown eyes.

It was all the evidence she needed to
conclude she was no longer in the Empire. If she had to guess, she
would assume she’d landed in Ashka.

The realms of Tarkan and Ashka had been at
war for centuries. Though a tentative cease-fire now existed, both
sides simply saw it as a chance to re-arm and strategize.

“
I’m not a weapon,” she held onto the
device as tightly as her numb fingers would let her. Her body was
still recovering from the effects of her fall. No doubt it would
take days for her usual resilience to return. Unless this man got
his hands on her. If he was Ashkan, he would either kill her on the
spot or drag her off to prison to let the Guards do it.

“
Why did they send you?” he moved around
the light, trying to get closer to her.

She kept shifting back, but this was not a
game she could play forever; the device would soon shut down and
she would fall to the ground. In her weakened state, she would be
an easy target for him. She had to do something quickly.

“
Please,” she began. She did not get the
time to finish her plea. He planted his hands onto the blue glow
and vaulted onto it easily.

He darted towards her, his boots, which were
thick with dirt and crumpled strands of hay trapped in the tread,
found easy purchase over the light. They squeaked with the speed of
his movements.