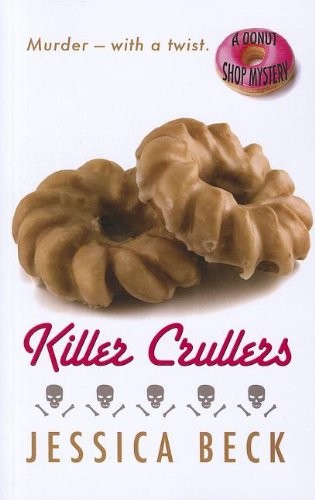 To all the donut makers in the world, both professional and amateur. And to those of us who enjoy the fruits of their labor!

“I owe it all to little chocolate donuts.”

Praise for the Donut Shop Mysteries by Jessica Beck

“Give me a dozen of whatever you still have on hand,” a tall, dark-haired man in his thirties asked me curtly at my donut and coffee shop in April Springs, North Carolina. I’d aptly named the place Donut Hearts, since my name is Suzanne Hart, and I couldn’t imagine being anywhere else than in my shop, a reclaimed train depot on the edge of our small downtown business district. He added with a frown, “I don’t care what they are. Just make sure they’re loaded with icing.”

It was near closing time, and I wasn’t sure what I could give him, since even my glazed donut stock had been depleted at that time of day, but as I studied the case, I realized that Simon Henson had neglected to pick up his special order for the second time in a month. Simon always made a big fuss over my crullers, and the first time he’d ordered a dozen nearly drowning in icing, he’d paid for them in advance. The next time, he “forgot”—both to pay for and collect his order—and when he didn’t pick them up, I was stuck with his crullers and had to end up giving them away. I told Simon if it happened again, he was going to lose his ordering privileges, and he’d sworn that he’d remember the next time.

“Are crullers okay?” I asked.

I held up an iced monstrosity and was afraid he’d back out of his offer, but instead, the man surprised me by saying, “Those are perfect.” I boxed a dozen crullers and put them on the counter, and he shoved a twenty across the counter toward me.

As I handed him his change, I said, “I hope you enjoy them. The icing might be a little much for most folks, but the crullers themselves are really good.”

“That doesn’t really matter. I’m not going to eat them,” he answered as he took the box and jammed his money into his front pocket.

That was certainly an odd response. “Do you mind if I ask you what you’re going to do with them, then?”

“Sure, why not? I’m going to throw them at the woman next door,” he said with a grim nod as he walked away.

That could only mean that he had a problem with Gabby Williams, and now I was going to be drawn into the middle of it, whether I liked it or not.

“Emma, cover the front,” I yelled out to my assistant in back as I raced outside after him.

I didn’t even wait to see if she’d heard me.

I hurried to Gabby’s shop and found my customer doing exactly what he’d threatened, throwing those heavily iced crullers at the door, window, and brick façade.

“Stop that,” I screamed as Gabby herself came barreling out of ReNEWed, her gently used clothing store that was beside Donut Hearts, barely missing getting pelted, as well.

“Not a chance until you admit what you did,” the man said as he hurled another cruller.

Gabby snapped, “Knock it off, Desmond Ray, or I’ll call the police.”

“Go ahead. Call them,” he said as he hit the door again. With the heavy icing, some of them hit, stuck for a moment, and then slid down the side of the building, while others seemed to explode on impact.

“Gabby, I had no idea what he was going to do with those,” I explained.

“I’ll deal with you later,” Gabby said as she glanced over at me for a bare second. When she turned back to the man, she said, “That’s it; I’ve had enough. I’m calling the cops.”

The threat didn’t even faze him. “Fine, go ahead. Then you can tell them how you stole from my aunt.”

That certainly got my attention. As a fellow shop owner, I knew how important our reputations were to us, and if this man was slandering Gabby, whether there was merit to his complaint or not, it could end up doing some real damage to her business.

Gabby put her cell phone back into her pocket and stepped between Desmond Ray and her shop. “I told you before; there wasn’t any cash or jewelry in your aunt’s coat when it arrived. I checked it thoroughly before I put it on sale.”

Desmond’s face reddened, and for a moment, the cruller missile pastry in his hand lowered slightly. “She told me she had ten thousand dollars stashed there, and don’t forget the diamond brooch.”

“Did she have the queen’s tiara tucked somewhere in there, as well?” Gabby asked. “The woman’s delusional, and we both know it.”

“Aunt Jean was positive about where she left the cash and the brooch,” Desmond replied.

“She might be, but she’s still wrong,” Gabby said.

“Are you calling her a liar?” The cruller rose again, and then left Desmond’s hand a moment later, shattering against the glass door, chunks of it flying through the air after the ricochet.

I was amazed by how calm Gabby seemed to be, though I had to believe she was seething inside. “I’m telling you, there was no cash in that coat, and certainly no brooch. I let you check the jacket yourself fifteen minutes ago. You saw that the pockets were empty.”

“After you cleaned them out,” Desmond said angrily.

There were still three or four crullers in the box, and while the man was distracted with Gabby’s replies, I grabbed it from him.

“Hey, those are mine,” he shouted as he tried to get them back.

I pulled a ten out of my pocket and threw it at him. “I’ve changed my mind. They aren’t for sale now. That should more than cover what’s left.”

Desmond gave me a look of icy evil, and then turned it toward Gabby. “I’m not going to forget this. You should know that I’m coming back. Both of you,” he said, and then stormed off.

I hated confrontations, and I could feel my knees go a little weak after Desmond was gone. “Wow, that was bad,” I said.

“It’s not the first time someone has accused me of acting unjustly.” She bent and began retrieving bits of crullers as she spoke. “Suzanne, please don’t just stand there; help me clean this mess up. After all, it’s as bad a reflection on you as it is on me.”

Not quite, I almost replied, and then decided to keep that particular thought to myself. While it was true that shattered crullers on the sidewalk and even sticking to the door and window weren’t the best advertisement for my business, having someone shout that Gabby was a thief was a thousand times worse for her.

As we worked at cleaning up the destroyed crullers, I said, “I didn’t know Jean Ray had a nephew. That is the ‘Jean’ he meant, right?”

“None other,” Gabby said. She made a face as she picked up a particularly mangled piece of cruller and dropped it into the box as though it were radioactive. “I knew she’d been slipping a little lately, but if you ask me, the old woman’s gone completely off the bend.”

That was odd. Jean came by my shop occasionally, and I’d never found her to be anything short of sharp and lucid, though she had to be approaching her eightieth birthday, if indeed it hadn’t already come and gone. “She seemed fine to me the last time I saw her,” I replied before my internal filter could stop me.

Gabby stopped what she was doing and looked hard at me. “Are you telling me that you actually believe that donut-throwing maniac?”

“No, ma’am,” I answered quickly. “I know what it’s like to be falsely accused. I’m on your side in all of this.”

Gabby seemed to consider that a moment, and then, to my relief, she nodded her acceptance of my explanation. Gabby Williams was not a woman I wanted to be feuding with, especially since my innocent crullers had been dragged into the fray purely by the sin of proximity.

We had nearly finished our cleanup when a squad car pulled up in front of Gabby’s shop, and our chief of police—and my mother’s current beau—Philip Martin got out.

“What seems to be the problem, ladies?” he asked.

I wasn’t about to say anything, but I was beginning to wonder if Gabby was going to respond at all when she finally said, “Everything’s fine here, Chief. There’s no need for you to get involved.”

I wasn’t sure the threats we’d both received qualified as everything being okay, but this was Gabby’s mess, and for once, I was thrilled that I wasn’t in the middle of a public confrontation.

“That’s not the way I heard it,” Chief Martin said as he hitched up his pants. It appeared that the man’s diet was still going strong. If he lost much more weight, the chief was going to have to get new uniforms instead of having his old ones taken in to fit his new, sleeker figure. I didn’t know how he was able to do it with all the home-cooked meals my mother had prepared for him over the past few months, but more power to him. I’d probably lose weight myself, if I could only figure out how to quit sampling the donuts I offered for sale.

“Who exactly has been speaking with you about my business?” Gabby asked, and I knew that the chief was on thin ice. No one, not even the police department, wanted to go toe-to-toe with Gabby, and that included Chief Martin.

He wasn’t thrilled by the conversation they were having, that much was clear, but the chief had a job to do, and I had to admire the way he took a deep breath, and then said, “Desmond Ray came by my office a few minutes ago. He claims you stole something from his aunt, so I need to hear all about it.”

“I’ll tell you the same thing I told him,” Gabby said. “Those coat pockets were empty, and Jean Ray is either lying or mistaken. Either situation is not my problem. Then again, she could be insane, and if that’s the case, it clearly runs in the family. I explained all of that to Desmond when he came by, and I thought it was resolved until the maniac returned and began throwing donuts at my shop.”

“Actually, they’re crullers,” I piped up.

Both Gabby and Chief Martin looked at me at the same time, as though I’d lost my mind by clarifying the distinction.

“Well, they’re not the same thing,” I explained.

The police chief shook his head, and then turned to Gabby. “Just to make Desmond happy, will you let me search your shop?”

“I didn’t do anything wrong,” Gabby said. “Why should I allow you to paw through my things?”

“I can’t make you, at least without a warrant,” the chief said with a sigh, “but don’t you think it might look better to everyone if you cooperated with the investigation?”