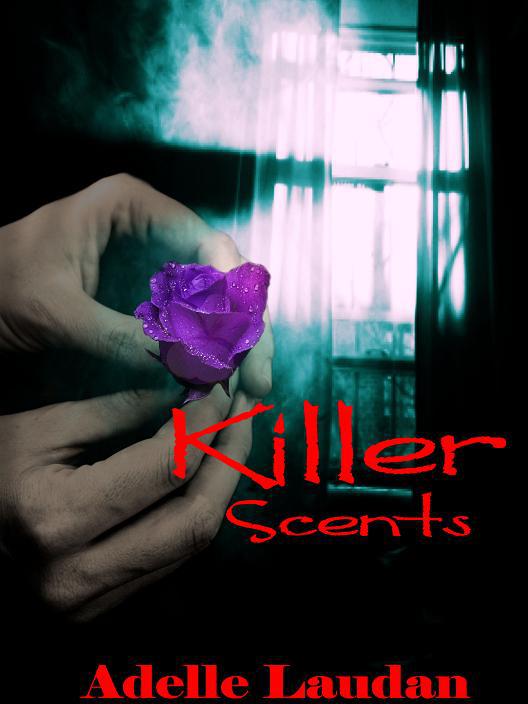 Becca and Randy are Harley riding detectives who join forces to find the ruthless killer the press have dubbed The Florist. What does the flower he places in his victim's hands have to do with the sick, twisted way he ends their lives? Will they track him down before he strikes again, or will a turn of events find one of them at the mercy of a demented killer?

All rights reserved. No part of this book may be used or reproduced electronically or in print without written permission, except in the case of brief quotations embodied in reviews. Due to copyright laws you cannot trade, sell or give any ebooks away.

A
ll of the lovely people

I’ve come to cherish as friends.

You know who you are…

N
ot even the rustle of leaves
intruded on
the sinister concerto play
ing
over and over in his mind. Only one obstacle stood in the way of his cleverly orchestrated plan
:
a rather intrusive
b
eagle
that
barked at everything and anything. He’d come too far to have a four-legged shit machine jeopardize it all.

It was much easier than
he
imagined. The stupid mutt didn’t hesitate to snatch the strip of beef jerky he held between the fence boards. It took less than a minute before Shithead lay on the ground, frothing at the mouth while a lethal dose of pesticides shut his yap for good.

His owner’s reaction had been an added bonus. An hour or so later, the kid, no more than twelve years old, kicked a can up the road toward the house. Several minutes after the boy disappeared inside, ear
-
splitting cries filled the cul-de-sac.

Too bad I don’t have any more of that jerky. I’d shut the kid up
,
too.

He diverted his attention
to the familiar whine of
his next victim’s
relic Pinto  round
ing
the corner
.
Sandra Bedows
parked out front of her tidy bungalow and opened the door. S
he
shifted her massive belly
to the side,
extract
ing
herself from behind the steering wheel and
then
lumbered up the pathway to her house. The swish of her overstuffed polyester pants rubbing together kept perfect rhythm with her labored
breaths
.

The acrid stench of her sweat assaulted him as she passed the cluster of bushes he hid behind. It took every ounce of restraint not to jump out
and put a gun to her head
while she unlocked the door.

Obscured in the shadow
s
of the house, he opened a leather-bound journal to the bookmarked page, and
then
followed the neatly written lines with his finger
to the bottom where he
paused.

Happy with the way the room looked for
her co-worker’s
celebration, I slipped away to freshen up. I wasn’t gone ten minutes and returned to find Sandra Bedows cramming the last corner of my beautiful cake in her mouth.

The woman offered no apology, and when I asked her to leave, she charged and pinned me to the wall with her mounds of fat. Luckily, the first of my guests arrived and were able to talk her down and convince her to leave.

Do I have to worry about her coming after me again? If she does, surely I’m as good as dead...

With a definitive nod, he tucked the book safely away and straightened his stance
.
He then
shrugg
ed
the thick strap from his shoulder to gain access to a long
,
black
,
cylindrical case carried on his back.
He
pulled out a most exquisite fuchsia
a
zalea protected by a sleeve of heavy
C
ellophane.

He drew a deep
breath
and
then
let it out slowly.

Calm down
.
Y
ou’ve been over this a hundred times. Stick to the plan and nothing can go wrong.

A quick look up and down the street assured him
he was
safe to step out of the shadows
. He
quickly
round
ed
the corner of the house and knock
ed
on her front door.

The curtain moved aside enough to garner eye contact, and he forced a smile. The lock clicked, and the door open
ed
a crack.

Her
bright-eyed
gaze settled on
the flower presented to her.

“Delivery for a Ms. Sandra Bedows. You’ll need to sign for it
,
ma’am.” He bedazzled her with a smile, all the while gritting his teeth.

Her cheeks stained pink. She fluttered her eyelashes. “For me? I can’t imagine who it’s from.”

Just open the door, you fat piece of shit.

His heart beat so loudly he feared she’d hear it and grow suspicious.

Sandra stepped out from behind the door, now wearing some kind of long dress. No, it was a tent decorated with big yellow and red flowers.

He dipped his hand into
his
bag
and closed
his fingers around the cool metal of his 9mm pistol. Without warning, he pushed his way inside and kicked the door
closed
behind him.

Sandra stood frozen, her gaze trained on his gun.

“Do exactly
what
I say and things will go much easier for you.”  He pressed the muzzle to her sweaty
temple
. “Trust me, you don’t want to piss me off.”

Her knees buckled and she dropped.
The woman
hit the floral
-
patterned carpet
and
grabbed hold of his pant leg, tears streaming down her flushed face unchecked. “Please...take anything you want. Oh, God
!
I beg of you...don’t rape me!”

An involuntary shudder travelled through his body at the mere suggestion, prompting him to take out a roll of duct tape, rip off a piece, and pull it taut over her mouth.

“Don’t flatter yourself
.
You’ll get exactly what you deserve and it has nothing to do with me trying to find your twat.”

Sandra
fell back in a big puddle of fat
. Repulsed, he took rope out of his bag and nudged her with the toe of his boot. “On your feet!”

It took a couple of attempts for her to stand. Once she did, he backed her up against the sofa. “Lay down on your back.”

Every move
ment
took monumental effort until she sat at the edge of a well-worn sofa, pleading with tear-filled eyes
,
her
mousy-brown
hair plastered to the sides of her face. His patience grew thin and he forcefully persuaded her to stretch out on her back.
Her flab melded
with the tired
checked
pattern of the couch, making him gag.

With no regard for the pain he was causing, he tied her ankles as close together as her tree-trunk legs would allow. Folds of skin pooled at her swollen, purple feet, and he swallowed back the bitter taste in his mouth, quickly manoeuvring her fat and tied her wrists together over her.

It took a few seconds to
calm down
and wipe the sweat from his
forehead.
He stretched to his full
height
and perused the room, noticing most of the faded,
baby-shit brown
curtains were drawn.

Probably so she can stuff her face in peace.

The corners of his mouth twitched
as he took a plastic container from his bag and lifted the lid with an air of drama. “I brought you something.” He took out half a cake with candles on it.

“Do you remember eating a cake just like this?”

Her head shook
from side to side vigorously
. As he tore the tape from her mouth, a pain-filled shriek rippled through the house.

“Oh, God, please...
W
hy are you doing this to me?” Spittle and snot covered her mouth and chin.

“Think about it really hard. It will come to you.” He didn’t wait for a response before forcing her mouth open and cramming the cake into it. She tried to turn her head to the side but was no match for him.

“Do you remember now?”

Her mouth was so full of cake it muffled the sound of her coughing and sputtering. Her eyes bulged.

“Why did you have to eat the whole cake? You fucking cow.”

He briefly closed his eyes to rein in his anger
. He then
took a deep
,
cleansing
breath
before fishing a needle
,
one
used by veterinarians to stitch through the thick
hide
of animals
,
from his bag. Heavy weight fishing line settled against his pant leg as he rested the needle on his knee to don surgical gloves and
a
mask. He picked up the remote from the coffee table and turned up the volume before setting it back beside a container of moist towelettes.

Snot bubbled from h
is
captive’s
nose,
and
her pupils dilated while she struggled to remain conscious.

Oblivious to anything else, he tore off another length of tape with his teeth and ran it across her
hairline
, securing it to the back of the couch and the edge of the coffee table to keep her from moving
her
head.

He wanted her eyes to remain open, but kept his own line of vision on the task before him. After a deep, steadying
breath
, he
pierced the center of her bottom lip, completely pulling the line through before repeating the action to her top lip. She grew rigid and tried in vain to escape, her screams muted by the cake in her mouth. Once her lips were secured together, he proceeded to sew her entire mouth shut.
He
took a few of
the wipes and cleaned the blood from her face before replacing the soiled gloves with a fresh pair. He then meticulously cleaned every surface he’d touched.

Barely lucid, Sandra stopped fighting him long ago. Big crocodile tears rolled from the corners of her eyes into her hairline.

He checked his pistol one last time and stepped forward, standing on the arm of the sofa by her feet. Her eyes grew big, terror dancing behind dilated pupils. In a final attempt, she struggled against her bindings.

Calmly, he took aim and pulled the trigger. Her body bucked once before settling in a pool of fat
. The putrid stench of
feces
wafted up from under her
. He felt no remorse ripp
ing
the tape from her head, uncovering a perfect hole in the center of her
forehead
. Her position allowed for very little spillage. He
wiped
around the hole and stood back to admire his handiwork.

Satisfied, he gathered his dirty
cloths
and
gloves
, along with the needle and tape before taking the azalea out of its protective sleeve and pushing the stem through her clasped hands.

At the door, he paused to give the room a final once over. If anyone were to look through the window he doubted they’d find anything amiss at first glance. There were no blood
-
spattered walls or signs of struggle. Sandra Bedows appeared to be sleeping peacefully on the couch until one looked a little closer to find
a bright pink azalea
in her hands and her
mouth sewn shut
. The gunshot seriously looked
like
someone
had taken
a marker and drew a perfect hole
between her eyes
.

Feeling very smug, he slowly turned the door handle.
Just like he’d planned
, the sun had begun its decent, offering him a veil of
darkness
to escape undetected. He looked up and down the street, waiting a few seconds for a car to pass before rounding the corner of the house and slipping away into the
night
.

Manly Wade Wellman - John the Balladeer 05 by The Voice of the Mountain (v1.1)
Protector of the Flame by Isis Rushdan
Charlie by Lesley Pearse
Love Love by Beth Michele
Covert One 4 - The Altman Code by Ludlum, Robert
Demo by Alison Miller
Killing Kate by Veen, Lila
The Far Empty by J. Todd Scott
The Man Who Loved Birds by Fenton Johnson
The Midnight Man by Paul Doherty