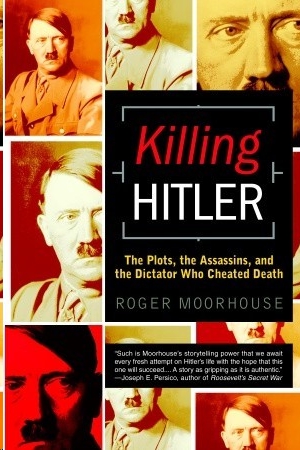 For
Melissa
,
without whom…

W
riting is a strangely solitary existence. Yet any writer would concede that though the words on the page may be his, numerous personal debts are accrued in their preparation.

A number of institutions should also be mentioned, including the British Library Newspaper Archive, the Gedenkstätte Deutscher Widerstand, the Bundesarchiv in Berlin, the Bundesarchiv (Militärarchiv) in Freiburg, the German Historical Institute in London, the Imperial War Museum Archive, the Polish Underground Movement Study Trust, and the Wiener Library.

Particular praise is reserved for the British Library and the National Archives in London. Having worked for many years as a researcher, I have extensive experience of working in archives and libraries across Europe and have come to the conclusion that these two institutions are without equal. There are, regrettably, few areas in which Britain can still claim to be world-class, but the British Library and the National Archives set a new benchmark in their efficiency, the competence and expertise of their staff, and the excellence of their working environment.

Three special debts must be acknowledged. Will Sulkin and Jörg Hensgen of Jonathan Cape were unflagging in their enthusiasm for the project, and my agent, Peter Robinson, was consistently supportive and negotiated the publishing deal that made it all possible. I would also like to thank Professor Norman Davies, who inspired me to embark on this path in the first place.

Lastly, I would like to thank my wife, Melissa. Hitler has been a part of our lives—the mustachioed elephant in our living room—for a long time now, and by way of apology for this intrusion, I feel it appropriate that I dedicate this book to her.

Chapter 3
The Abwehr: The Enemy Within

Chapter 4
“The Nest of Vipers”: The Polish Underground

Chapter 6
The Dirty War: The British and the Special Operations Executive

I might be killed by a criminal, or by an idiot, at any time.

ASSASSINATION, IT WAS ONCE SAID, HAS NEVER CHANGED
the history of the world.”
1
This benign sentiment, often repeated in times of crisis, is wishful nonsense, however. In response, one might point most obviously to the killing of Archduke Franz Ferdinand in Sarajevo, which unleashed the First World War, or to the murder of Sergei Kirov in 1934, which sparked the murderous purges in Stalin’s Soviet Union. Assassination clearly has the capacity to affect world events.

More recently, the question of the utility of assassination as a political weapon has been subjected to closer examination. An analysis of eighteen famous assassinations through the ages concluded that not one of them achieved their wider political aims.
2
Indeed, in many cases, the results were the exact opposite of those intended. The murder of President Lincoln in 1865, for example, by a southern sympathizer proved disastrous for the
American South, while the assassination of Lord Cavendish by Irish nationalists in 1882 set the cause of Irish independence back by a generation. Assassinations, therefore, have certainly changed history; they have just never changed it in the way foreseen by the assassin.

Yet the possibility that Hitler could have been assassinated is one that has tantalized historians and fiction writers alike. It is tempting to speculate not only on the number of lives that could have been saved, the conflict that might have been avoided, and the suffering that perhaps would have been spared, but also on how differently European, and especially German, history might have played out in the twentieth century had Hitler been successfully felled by an assassin’s bullet. Surely here, if nowhere else, is a case where an assassination might actually have brought the benefits intended by the assassin.

The majority of modern readers would probably agree, instinctively at least, with that statement. But it is interesting to note that unanimity on this issue was much harder to find during Hitler’s lifetime. Then, discussions raged over the propriety of “playing God,” the setting of dangerous precedents, the thorny concepts of “principled treachery” and “state-sanctioned terrorism,” and the question of what further horrors might have followed Hitler’s premature demise. Surprisingly, perhaps, the proposal to assassinate Hitler was never anything less than highly controversial.

Yet, for all these concerns, Hitler’s would-be assassins were not dissuaded. Few leaders, of any century, can have been the target of so many assassination attempts: no fewer than forty-two separate plots on Hitler’s life have been identified by German historians, and even that list is far from complete.
3
Of these, around twenty can be considered serious enough to warrant the attention given to them here.

Hitler was probably the most influential individual of the twentieth century. His name has become synonymous with brutality, intolerance, and racial hatred. His face, perhaps the most instantly recognizable and iconic image of the modern era, is one
that few—even those blessed with living in peaceful times—will ever forget. Yet what of his would-be assassins?

In some cases, the assassin and his victim are bound together in perpetuity by their moment of shared history. Thus John F. Kennedy has his Lee Harvey Oswald, Abraham Lincoln has his John Wilkes Booth, and Franz Ferdinand has his Gavrilo Princip. The assassins of history are sometimes lauded as heroes and are often vilified as the most bestial of criminals, but they are rarely forgotten.

Yet Hitler’s would-be assassins are, for the most part, unknown. Of them, only the name Claus von Stauffenberg might expect to register any reaction from the reading public. For all of them, of course, their greatest failing was that they were unable to carry out their allotted task—that of ridding the world of Adolf Hitler—but they nonetheless deserve greater recognition. They deserve better than to exist only in the footnotes of history, better than the obscurity to which they have been condemned by time and fashion, and in many cases by their Nazi executioners.

Hitler’s assassins ranged from simple craftsmen to high-ranking soldiers, from the apolitical to the ideologically obsessed, and from enemy agents to his closest associates. Inexplicably, few of these men are known beyond the narrow confines of academic history. Their deeds would elicit scarcely a flicker of recognition from the general reader. This is their story. It is the story of their plans, their motives, and—inevitably—their failures. But it is also an account of the remarkable survival of a tyrant.

Few of the guests would have noticed the sallow-faced young man who entered the beer hall that evening. All of the great and the good of Munich were there: bankers, businessmen, newspaper editors, and politicians. They had gathered to hear an address commemorating the fifth anniversary of the November Revolution, given by the newly appointed state commissioner for Bavaria. They had expected a forceful denunciation of Marxism, an explanation of the administration’s policies, perhaps even the advocacy of a restoration of the Bavarian monarchy. What they got was an attempted revolution.

The hall, the Bürgerbräukeller, was one of the largest in Munich. Located on the east side of the river Isar, which bisected the city, it was a cavernous room that belied the cozy image of the
traditional beer hall. With a high ceiling, ornate chandeliers, and a wide balcony running down one side, it could accommodate around three thousand people seated on either side of long wooden trestle tables. As such, it was one of the primary venues in Munich for public lectures and political meetings. This evening, it was packed to the rafters. The doors had been closed already at 7:15 p.m. to prevent overcrowding, and the disappointed milled in the drizzle on the street outside.

The man loitering at the rear of the hall would have been known to many of the guests present that night. A pale individual in his mid-thirties, with sharp cheekbones, a toothbrush mustache, and striking blue eyes, Adolf Hitler was the leader of a local extreme nationalist group that called itself the National Socialist German Workers Party—or Nazis for short. He was renowned as a talented and inspirational public speaker, captivating his audiences with his impassioned and intemperate lectures on German politics. He had already spoken at the Bürgerbräukeller numerous times. This evening, however, he had come as an unlikely revolutionary. Dressed in a poorly cut black morning suit with flowing tails, his hair slicked close to his scalp and falling in unruly strands across his forehead, he looked more like an overworked waiter or an undertaker.

Nonetheless, about half an hour into the keynote speech, he began to make his way forward at the head of a phalanx of fellow putschists. As a detachment of Nazi storm troopers appeared, dragging a machine gun into the hall entrance, the distinguished speaker on the podium tailed off into silence. Whispers spread around the cavernous hall, drinkers craned their necks to see what was going on, women fainted, and tables were upended. In the commotion, Hitler clambered onto a chair, fired a pistol shot into the ceiling, and called for silence. “The National Revolution,” he announced, “has begun.”
1

After a brief speech, he posted his troops and bodyguards at the exits and persuaded three of the honored guests present—who, between them, effectively ruled Munich—to retire with him to an adjoining room. There, in wild excitement, Hitler harangued his captive audience, announcing the formation of a new
government with himself at its head, and promising ministerial posts for those present if they agreed to cooperate. Waving his gun, he warned melodramatically: “I have four shots in my pistol. Three for my collaborators if they abandon me. The last is for myself.” With that, he put the gun to his temple, declaring: “If I am not victorious by tomorrow afternoon, I shall be a dead man.”
2

Germany in 1923 had endured five years of chaos. Emerging from defeat in the maelstrom of World War One, its fledgling democracy was assailed from both left and right, and undermined by a disintegrating economy. Political radicalism was fueled by a spiral of debilitating hyperinflation. By 1920, the price index stood at nearly 15 times its value in 1913; two years later it was approaching 350. 1923 was to be a crisis year. In the west, the French occupied the Ruhr in response to the German nonpayment of reparations, sparking passive resistance, strikes, and hunger riots. Elsewhere, disgruntled army units mutinied at Küstrin, east of Berlin, and in the subsequent months, pro-communist governments were established in Saxony and Thuringia. For a time, the instability appeared to be terminal, and all the while, the economy was heading into free fall. Prices in January 1923 were more than 2,500 times higher than they had been in 1913. By December they were 1.25 billion times higher.
3
The hyperinflation had become a full-scale currency collapse. The humble loaf of bread could cost over 400 billion marks, and many households found it more economical to burn money than attempt to use it to buy kindling or coal. Most Germans faced financial ruin.