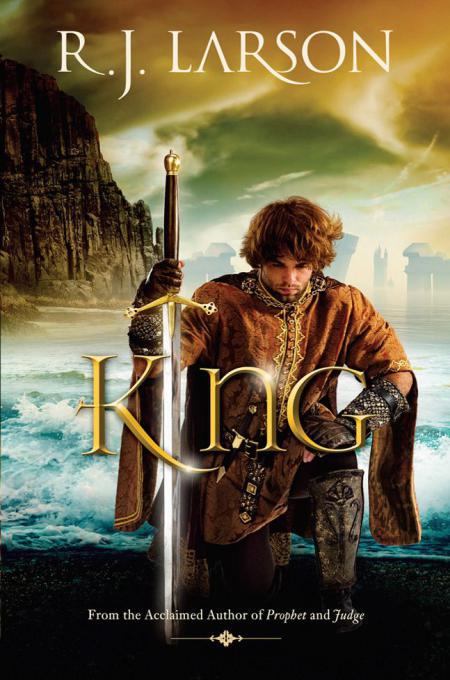 This is a work of fiction. Names, characters, incidents, and dialogues are products of the author’s imagination and are not to be construed as real. Any resemblance to actual events or persons, living or dead, is entirely coincidental.

To Larson, Robert, and Katharin

P.S. Thanks for cleaning the kitchen!

General Rol \Rawl\ The Tracelands’ General of the Army.

A
salt-tinged ocean breeze lifted Akabe of Siphra’s gold-embellished mantle as he stood on the uppermost white marble step before his country’s razed, ruined Temple of the Infinite. Bracing himself, he called to the crowds below, “Today we have gathered to reclaim a treasure vital to Siphra, and vital to our journey through this life—the Infinite’s Holy House!”

Earsplitting whistles and shouts of approval echoed all around Akabe, easing his fears. Affirmations of his decision to rebuild this place of worship, which had been toppled by his brutal predecessors.

As he waited for the enthusiastic uproar to fade, Akabe studied the multitudes in the white-paved public square below the steps. Arrayed in bright robes and mantles, the citizens of Munra, Siphra’s capital, met his gaze, respectful, yet pleased. They quieted now, listening. To
him
. An almost-nobody rebel and hunter . . . turned king.

Who could ever dream of such a swift, unexpected rise to power? Not Akabe. Truly, his people were insane. Why had they accepted him as their king?

Yet he must honor their decision. Now he would earn his place—and their continued esteem.

Clearing his throat, Akabe proclaimed, “Therefore, as we celebrate the first day of work in restoring this Holy House, I ask
you all to rededicate yourselves and this place to the Infinite! Let Munra and Siphra be worthy of such a glorious and sacred crown!

“In generations past, the Infinite’s Holy House was Siphra’s glory—a gathering place for our people as we worshiped our Creator. Now, as your king, I decree that this Holy House shall be built again, on this same historic, consecrated ground, acclaimed by the priests of old as the Infinite’s own land. This place must ever be His alone in Siphra! This sacred site that our oppressors defiled, as they devastated . . . and killed . . . our defenseless people. . . .”

Akabe paused, remembering all the precious lives lost before the recent revolution. He eyed the crowd in a bid for composure.

No help there. Many of the women were now weeping into their scarves and veils, while here and there men sniffed and blinked, or rubbed their noses into their long sleeves. Not a family had been left untouched by the terrors of the previous reign.

Fighting back his own tears, Akabe forged ahead. “Today we remember our loved ones—torn from our lives by hatred! We recall their courage and their sacrifices as we feast with our workers at the very foundations of our previous temple. Let those who sought to destroy all worship of the Infinite in Siphra see that by the Infinite’s mercy, we have survived! And I, your king—with all my might!—will guard your freedoms to worship our Creator! This Holy House will again become Munra’s blessed crown!”

Munra’s citizens yelled their agreement, the men stomping and cheering, the women waving colorful scarves in celebration. Akabe exhaled, acknowledging his subjects with a grin and a wave. Success! He might yet amount to something as king.

Standing almost beside him as usual, Lord Faine—Akabe’s chief advisor—leaned into view now, his elaborately sculpted and waxed gray beard twitching with enthusiasm. “Majesty, they’re overwhelmingly for you!”

“Yes, and I don’t understand why.” Followed by his gossiping, overdressed entourage, Akabe walked with Faine across the ruined temple’s vast stone terrace, their booted feet sending bits of pale rock clattering with every step. “Until now, I’ve done nothing to merit my people’s approval.”

Faine harrumphed disagreement. “You believe that protecting others during the revolution and then defeating Belaal—our most hostile neighboring country—in battle was nothing?”

“I did not defeat Belaal, Lord Faine. The Infinite did. Give tribute to the One who deserves glory.”

“Ah, very true. Then, sir, it must be that your people are pleased because you’ve not asked for new taxes to rebuild this temple.”

Akabe laughed. “Aha! At last, the terrible truth! They love me because I haven’t spent their money.” As he spoke, Akabe glimpsed a small flurry of movement to his left. Barth, his youngest page and heir to Lord Siymont, skittered across the broad stone pavings, his short official crimson cloak askew as he chased an undoubtedly terrified miniature lizard.

Biting down a grin, Akabe shot a look at the boy’s stately tutor, Master Croleut, who obviously feared to break formation from Akabe’s attendants—much less to physically restrain a powerful nobleman’s heir.

Instantly, the little boy straightened himself, but not his cloak. Flushed from the failed chase, he offered Akabe a gap-toothed smile and lisped, “Sir? I mean . . . Majesty?”

Barth scrunched his nose as if smelling something vile. He threw an accusing glance at Croleut, who hissed at the boy, “Sst! Young sir, manners! Bow to the king!”

Barth trotted to Akabe, bowed, then protested, “But, Majesty, I finished today’s lessons.”

A valiant plea, but worthless. For the sake of training, Akabe pretended sternness. “With Master Croleut, yes. With the prophet, no. And you’ll behave for the Prophet Ela while I
inspect the temple site, Barth. No arguing with her or with the other students. I command you.”

“Yes, sir.” The little boy’s gloom deepened. But then he raised his dark eyebrows at Akabe in a teasing manner he’d obviously inherited from his father, Ruis, Lord Siymont. “Is she pretty?”

Beautiful
, Akabe wanted to say. But caution restrained him. An unmarried king must avoid praising any lady overmuch, even to a child. Why provoke gossip? “You will like her. She’s defeated monsters and survived battles.”

And Ela had anointed him as king at the Infinite’s command. One deed Akabe wished she’d left undone.

He’d never wanted to be king. Worse, the Infinite had given Akabe this appalling responsibility with no true explanation or direction. Not even from His prophets. Therefore, he must make his own decisions and work for the Infinite’s glory and for Siphra’s people.

Leading his retinue, Akabe crossed the gravel-strewn terrace, his conviction becoming more assured with each brisk step. Surely he couldn’t have chosen a more magnificent, unifying task than to restore the Infinite’s Holy House to Siphra. For the Infinite.

Surely the Infinite was pleased.

Unwittingly testing Akabe’s patience, Lord Faine talked nonstop as they marched across the temple site. Faine’s broad, ring-garnished hands accented his intonations. “ . . . and we are blessed, Majesty, that the foundations remain from the first temple. This will speed along the new temple and reduce costs.” Lowering his voice, glancing around, Faine added, “As a result, Parne’s treasury alone ought to easily fund the work.”

His lord-counselor’s caution was understandable. The distant and ancient city-state of Parne no longer existed. Yet Parnian refugees abounded here, brought to Munra last year by Akabe’s own army after Parne’s devastating besiegement by their mutual enemy, Belaal.

Mentioning the gold removed from Parne’s own demolished temple—no matter how well-intentioned—could only wound the Parnians. Particularly their remarkable young prophet, Ela Roeh, who now waited to greet Akabe.

Her prophet’s staff in one hand, Ela stood with her two formidable chaperones just beyond the fringe of her makeshift canopied study area. Akabe eyed the prophet’s staff. The branch, Ela called it. An ordinary-seeming piece of vinewood. But he’d seen that branch glow like fiery-white metal, illuminating Ela’s dark hair and eyes with the Infinite’s power.

Healing her of fatal wounds.

Now the image of a model Siphran, Ela bowed. When she looked up at Akabe, her big brown eyes shone, serene. She appeared, for all of Munra, to be nothing more—or less—than a lovely young lady in a flowing tunic and embroidered mantle. Yet Akabe knew better than to be lulled by her delicate appearance. Strengthened by the Infinite’s Spirit, this girl felled kingdoms.

Never, for as long as he lived, did he wish to become a target of this prophet’s warnings.

Aware of his watching courtiers, Akabe acknowledged Ela with a nod and a polite smile. “Prophet. I have a new student for you.” Master Croleut nudged little Barth of Siymont forward. Scuffing his boots over the pavings, the boy halted before Akabe with an unenthusiastic sigh.

Akabe struggled to sound serious. “Barth, remember what I said.”

“Yes, Majesty.” Barth looked up at Ela. His eyes widened and, ever Siymont’s courtly son, he fluttered his lashes. “I have a loose tooth!”

“Do you?” Ela seemed thrilled. “Well, if it falls out during lessons, we must be careful to save it. Now, Barth, these are my chaperones, Tamri Het and Matron Prill. And they’re very strict with me, so I must behave. You’ll help me, won’t you? Do you have a writing tablet? No? You may borrow mine.”

Watching her, Akabe wished he could join the class.

Other youngsters approached, bowing shyly to Akabe before taking refuge behind Ela. Akabe greeted them with a smile, then departed to inspect the future temple’s foundations.

Kneeling between the silver-haired Tamri Het and the veiled young widow Matron Prill, Ela clenched the branch, fighting the longing to fidget. Really, she felt so restless that she ought to sit among her little students as they worked. Not good, these fidgets. They were no mere springtime restlessness. And the branch gleamed at her subtly, showing glints of light.

Infinite? What is about to happen?

Whatever it was, Ela prayed the trouble would wait until after class, when her students were safe with their parents.

He ceased his tooth-wiggling and flourished the wax writing tablet. “Yes—see? And I drew a scaln!”

Goaded by Barth’s exuberance, other students waved their work. Before they could accidently hit each other with their tablets, Ela said, “Very good, everyone! Let’s recite our verse, shall we?”