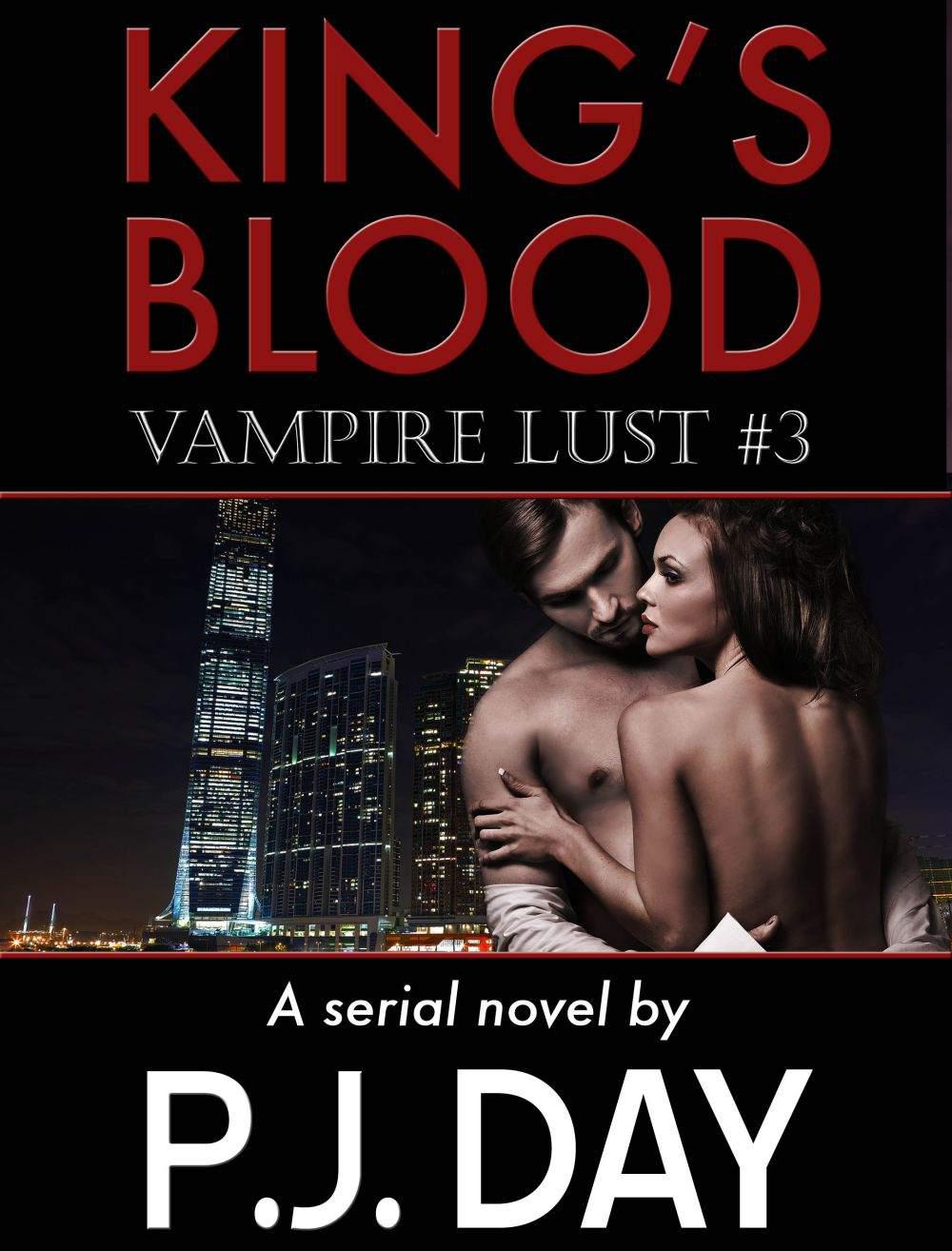 “
P.J. Day breathes fresh air in a genre oversaturated with the same plotlines and characters. This page turner is something special.”

“A fun departure from the usual vampire tale, with
King’s Blood
author P.J. Day has introduced a whole new kind of vampire.”

“Hip. Relevant. Darkly funny. Day’s vampires offer a unique perspective on what it means to be human. A fantastic new series.”

All rights reserved. Without limiting the rights under copyright reserved above, no part of this publication may be reproduced, stored in or introduced into a retrieval system, or transmitted, in any form, or by any means (electronic, mechanical, photocopying, recording, or otherwise) without the prior written consent of the both the copyright owner and/or author.

Cover Design by Susanna at:

To my beautiful baby girl, I thank you for perspective.

Special thanks to H.T. Night, J.R. Rain, Eve Paludan, and Sharon F. Stewart for all their help.

King’s Blood
is a serial novel that has been split up into four episodes. This series is best enjoyed and understood by reading
Vampire Revealed
first, followed by
Vampire Unleashed
, then
Vampire Lust
and finally
Vampire Descent
. Vampire Lust starts off after Jack and Ted escape a harrowing night that could have led to Jack’s coercion by Hong Kong authorities, potentially putting his identity in peril. Jack is beginning to have feelings for Holly by this juncture in the novel and begins to ponder the possibility of revealing his true nature to Holly. Ted, Jack’s best friend and confidant, is beginning to exhibit reckless behavior and is beginning to put stress on the company’s corrective measures that they both reluctantly agreed to follow. Schnell Corporation, the genetic software company Jack and Ted work for, feel there might be more to their client than what has been revealed so far on the surface; one with potentially catastrophic circumstances, not only to Schnell’s long term viability but also to the global economy. Alan and Rebecca, two of Schnell’s top engineers, have met Jack and Ted in Hong Kong to help Jack find out more about their potentially rogue client and to ensure Schnell remains profitable, thus ensuring Jack’s gainful employment, which safeguards him from a life of obscurity and living in the shadows.

It was 3:00 a.m. by the time we arrived at the Peninsula. Ted had fallen asleep on me during the cab ride. His head felt like an enormous, round, hairy paperweight nestled onto my shoulder, leaving my entire clavicle stiff as a washboard. I nudged him a bit, hoping to wake him up from his slobbery slumber. Ted mumbled incoherently like an anesthetized child shortly after having his tonsils removed. With a subtle slur he asked, “Wha...huh...are we there yet?”

His jacket was saturated with an aroma of booze and cologne, I wrinkled my nose and shoved his limp body up toward the door;

“Can you open it?” I asked him, making sure he was lucid enough to find the door handle.

“
I got this, Jack...relax, I’m fine,” he mumbled, one eye half closed, the other redder than a pearl dipped in red ink. The cab driver watched us stumble out of the cab like a couple of drunken frat boys after a night of unsuccessful hunting. Who needed women when we had each other? Bros till the end! Actually, to Ted’s end, naturally and unfortunately, but he didn’t need to be reminded of that fact; it’s quite depressing.
We entered the hotel. The lobby was mostly empty except for some Nordic-looking fellows checking in after another red-eye flight. I waved at them as we approached the front desk. They responded with warm smiles that were nestled in between their rosy, chapped cheeks, then with horrified stares when they noticed the blood all over my shirt and face.

My back was beginning to stiffen up a bit as we continued to stand in line. There was only one person working the front desk in the early morning, checking each guest, one by one. Ted looked haggard and a bit strung out. With hints of dread and worry in his voice he asked me, “What did you do to that poor woman?” He then caught himself and shook his head in confusion and said, “…I mean dude.”

Ted looked at me, his right eyebrow raised. With deep skepticism, he asked, “What you are allowed to do? What the hell does that mean?”

“There is an unspoken vampire code I adhere to.”

“
Really? I didn’t know anything about this code. What are you hiding from me?”

“
Nothing, I swear,” I exclaimed, slightly irritated at his sudden mistrust. “Look, don’t laugh, okay? I know it sounds kind of cheesy, but this code is ancient stuff. It's been passed down to every generation of vampires since antiquity.”

Ted’s face went from a doubtful expression to a jovial smirk. “You didn’t tell me anything about this. Who taught you this code? The whole thing sounds kind of ludicrous, actually.”

In all honesty, I had no idea who invented this code. I learned about it decades ago in New Orleans from a peregrine vampire named Chuck as I traveled west to California. I think it was created in order to keep vampires in check—kind of like religion. I vaguely recall the first code was to assimilate; the second code was to never kill your host, only in self-defense, or if your life was in grave danger. Lastly, the third, if I could paraphrase Chuck, was to never love someone and to absolutely never fall in love. The latter part of the code flies directly in the face of our true nature, but it has ended, prematurely, the lives of many in our clan who chose the errant path of Eros.

Ted clenched his teeth. His eyes opened wide, making sharp eye contact with me. “Okay, so did you kill anyone back there or not? Did this code stop you from murdering someone in cold blood?”

I rolled my eyes. I put my right hand on Ted’s shoulder, squeezing it tightly. “Listen to me very carefully...I did not end anyone’s life at the club. I know it looked ugly, but I do not kill unless it’s to defend my life. My life was never in danger, okay?”

Ted’s pacing ended abruptly. He continued to look at the ground, turning his eyes away from me. I sensed a hint of shame in his voice. “Fine, if you say so...I trust you. The last thing I want in my life is to be best friends with some murderer.”

He lifted his head and looked at me, desperate for a physical cue or a word of reassurance. I leaned a little closer into his personal space and said, “Ted, I swear to you right now, I...did...not...kill...anyone.”

His sharp eyes relaxed a bit as his tense shoulders gave way to his usual hunched posture. “Okay, I believe you.”

A couple of minutes passed as we continued to wait in line. Ted’s changed disposition gave way to a more casual line of questioning. “I was thinking, why did Chang take us to that place anyway?”

“I think it was because he overheard you asking to bite my neck in the cab.”

“
Oh,” Ted said, as he smiled. He paused for a moment and then proceeded to chuckle out loud in the lobby.

Eventually, the group of the blonde-haired, blue-eyed giants left for their rooms. We lurched up to the concierge desk, looking like noodles walking on air.

“Good morning, how may I help you tonight?” asked the concierge, his mental state quite cheery, despite working the late shift. He kept focused on the stains of my shirt for a second or two then looked away, refocusing on his purpose behind the desk.

“
I know that the internet has been down since we arrived...have they fixed it yet?” I asked.

“
Our internet service is back up again. We don’t expect any further interruptions. Is there anything else I can do for you?”

“
Are you sure, sir?” he insisted. “We have a wonderful dry cleaning service.”

“
Oh this?” I pointed at my outfit. “No dry cleaning service is cleaning this thing up.”

We both walked to the elevators that led to our rooms. There was an old receipt in my pocket. I crumbled it up and tossed it at the trash can that was next to the elevator door, of course, I missed. I then noticed Ted rummaging through his pockets for more sleeping pills. “You know what? I think I’m out of Lunesta.” His expression was flustered, like a chimp that just lost his grooming partner.
“Looks like you’re going to have to go to sleep the old-fashioned way,” I said.

Ted was getting antsy. He paced back and forth. His
fiending
was becoming more and more obvious as our night continued to drag on.

“
I need something that will put me to sleep, you know? This whole schedule has me all fucked up. I’ll head to the gift shop for some over-the-counter stuff. You want anything?”

Ted’s train of thought shifted abruptly as my response didn’t even register in his brain; he immediately turned around and headed for the gift shop. I felt a little bit of remorse leaving him behind in this state. I was tired, though. My back hurt, and considering what happened to me earlier at the restaurant, with my strange symptoms, I felt it was imperative that I went to bed as soon as possible.

I projected my weathered, gravelly voice at Ted. “Hey!”

The elevator door opened. I turned around and walked in. As the doors closed, I noticed Ted stumble and catch his step. He fell asleep in the car pretty easily without the aid of drugs. I was surprised seeing him dependent on sleeping pills—non-habit forming, my ass! Ted was turning into a drug addict before my eyes, but I didn’t have time on this trip to play Dr. Drew Pinsky. I had to live with this new reality and adapt accordingly as long as we were in Hong Kong.

I walked out of the elevator. My eyes were beginning to feel very heavy. There was slight itch in my throat, probably due to all the ceremonial alcohol drinking I did all night. As I headed to my room, a beautiful brunette with a red scarf and a stylish beige parka strutted toward me in the hallway. As we got closer, she noticed the blood on my shirt. She quickly gave me a concerned glance that slowly morphed into an awkward smile.