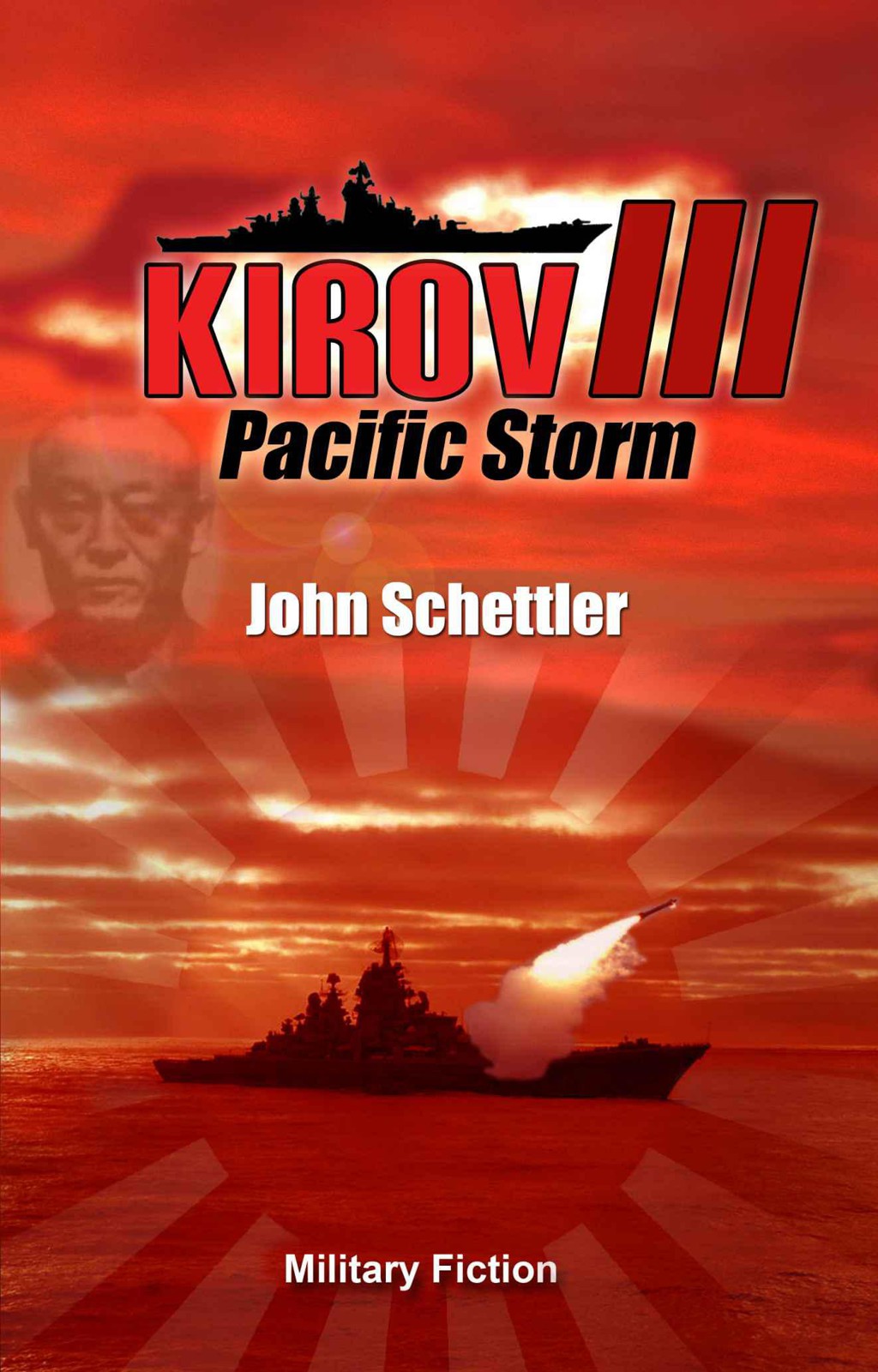 “The
death of God left the angels in a strange position.”

Discover
other titles by John Schettler:

“On the sea the boldest steer but where their ports
invite;
But there are wanderers o’er Eternity
Whose bark drives on and on,
and
anchor’d
ne’er shall be.”
—Byron: Childe Harold III.lxx.

This
a novel presenting an alternate history of WWII as a result of variations in
the historical timeline caused by the presence of the battlecruiser Kirov and
its actions in Volumes I and II of this series. Events depicted, however are
well underpinned with good historical research.

While
the ship and crew of the Russian battlecruiser Kirov are of my own making,
every other ship and character mentioned, from the highest officers on down to
the lowest able seaman or pilot, is a historical figure, placed in the roles
and locations where they served during the action describe.

It was
a long night for Charlie One and
Strangler Mackenzie out on the Melville Island group. Strangely named, they
were a pair of very diligent Aborigine coastwatchers working in a unit called
the “Black Watch” established by patrol officer Jack Gribble from the Native
Affairs Branch at Snake Bay. The native contingent was doing some very
effective work. American pilot Lt. J. Martin had been rescued after a grueling
214 kilometer overland trek by these able scouts, and the Army was thankful for
it, and for the capable eyes these men brought to places few others could even
travel.

Gribble had pulled together thirty-six
men in all, Aborigine natives, and given each one an easy handle he could live
with and pronounce, as their own real names were beyond his grasp. The unit
worked out of a small ration station, and the natives were given all the
tobacco they could ever want as an advanced payment for services, with a
promise that they would be paid in real cash at the end of the war, whenever
that came.

Dem darn blurry Japs gonna make war
for a very long time,
thought Charlie. Who knew how long it might take before they would ever see any
real money, but at least the nice new naval uniforms, regular food, and a new
rifle with the tobacco were good prizes in the short run. Charlie had trained
with Ginger One and Harry One on how to throw grenades, mount and use a machine
gun in a coastal lighter, and best of all, how to ride in an undersea boat, all
the way out to Timor Island to have a look at what the Japs were up to there.

The coastwatchers had been brought
under tighter Army control in June of 1942, with the aim of finding and
rescuing downed allied pilots, capturing enemy pilots, locating and
investigating plane crashes from either side, and also providing assistance as
spotters for the West Point Defense Coastal Battery. On occasion they would
even serve as guards for the Australian Naval Headquarters at Darwin, and
Charlie One had recently finished a tour there before heading back up to the
north coast of Melville Island as a coastwatcher. He was very glad to be where
he was when he saw the Japanese planes heading in for Darwin again that day,
and heard the distant explosions, saw the tall billowing columns of smoke on
the horizon to the south.

Yup,
he nodded inwardly
, blurry Jap soldiers be
follerin
those planes in just another day or two now. All
these places out
amonga
mangroves soon be crawling
with bad men carrying rifles.

In fact, on this very day he had been
sent here with Strangler Mackenzie to look for an unidentified plane. It was
feared that the Japanese were already landing early detachments on the island
from seaplanes. But it was no seaplane Charlie One saw that evening as he
peered north from the coast of Bathurst Island. It was a flock of enemy planes
chasing something much bigger and getting some real trouble for their effort.

“Strangler!” he called insistently. “
Lookie
here!” His mate was soon up at his side, eyes wide
as the two men watched the battle scene unfold. They saw the arrival of enemy
torpedo planes, swooping down on a distant ship, large and menacing on the
seas. Then they gasped in awe at what they saw next, and sat mesmerized by the
smoke and fire of anti-aircraft guns. Strangler had the presence of mind to
pull out his picture box and was snapping photographs of the scene as best he
could in the waning light.

“We best be done
gawkin
’
and take that picture box south to Darwin. They be
wantin
’
those photos on a plane straight away.”

“Heather 16 be
dokin
’
at Darwin now,” said Charlie. “That’s Bin
Sali’s
boat. He can give
dem
pictures to his Lieutenant.”

Heather 16 was a coastal lugger that
had been operating in a small fleet of pearling boats along the Kimberly Coast,
and was now pressed into service as a patrol boat out of Broome, owned by Lt.
D.L. Beau Davis. A capable man, Davis spoke both Russian and German in addition
to several dialects of Aboriginal language, and even a little Japanese. Not to
exclude anyone, his lugger was now crewed by seven Chinese, two Timorese and
one Malay in addition to Bin Soli and Lenny Leonard, two Aborigines. He plied
the waters off the coast for years, trading tobacco and turtle shells with the
local natives, along with dingo scalps and sometimes even a pearl or two
nestled in a good clay pipe.

Well known in these parts, Davis made
the acquaintance of an enterprising journalist, and this is what Charlie One
had in mind, for he had seen the two men together drinking in bars at Darwin
and talking long into the night.

“L.T. be
givin
’
us a pearl for
dem
photos,” Charlie suggested, “cause
he be
givin
’
dem
to
dat
reporter for some good money.”

Strangler nodded eagerly as the two
men set foot south, ready to run down to the coastal lighter tied up at the
shore and sail all night from Bathurst Island across Beagle Gulf to Darwin.
What they carried was indeed a pearl of great price, for their photos would
soon find their way into the hands of that curious newspaper correspondent and
journalist, a man named Cyril Longmore who had come out to document the war on
the Kimberly Coast.

When Longmore got them developed that
same day, he gaped at the images, amazed to think the Japanese would have been
engaged with such a large and formidable looking vessel in the Timor Sea. He
knew for a fact that there were no Australian or British ships in the region,
and a few long conversations with associates on the telephone soon convinced
him that there were no American ships about in these waters as well.

As it happened, Longmore, later to be
Captain Longmore, was good friends with the Australian Prime Minister John
Curtin, who was an old journalist and newspaper man himself.  So he was
able to get the photos quickly into the right hands to attempt to answer the
very same questions running through his own mind. Curtin had also just been
sworn in as Australian Minister of Defense, and when Longmore called, the
photos got some very high level attention, very fast.

So it came to pass that knowledge of a
strange, unaccountable warship in the Timor Sea soon traveled from the eyes and
ears of two Aboriginal scouts, to journalist Cyril Longmore, and thence to
Prime Minister John Curtin himself, and right into the hands of Allied
intelligence units. Copies went out quickly to Brisbane, Sydney, Melbourne and
Perth, and then on to the British Naval Station at Trincomalee on Ceylon by
plane for a flight to Alexandria. After that it was just a few quick hops to
Gibraltar where other curious eyes were soon to see them and note the uncanny
similarity to a ship they had confronted just days earlier. The next plane to
England would begin to unravel the long mystery that had baffled British
intelligence for a very long year, and the word “Geronimo” was soon again being
whispered in exclusive circles, and carried once more to the arcane halls of
Bletchley Park by a most able and determined man.

“So
long the path; so hard the journey,

When
I will return, I cannot say for sure,

Until
then the nights will be longer.

Sleep
will be full of dark dreams and sorrow,

But
do not weep for me…”