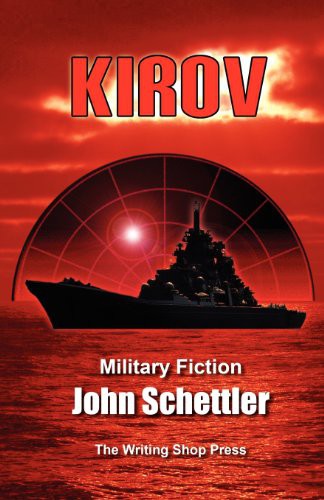 A publication of:
The Writing Shop Press

Discover other titles by John
Schettler:

“On the sea the boldest steer but
where their ports invite;
But there are wanderers o’er Eternity
Whose bark drives on and on,
and anchor’d ne’er shall be.”
—Byron: Childe Harold III.lxx.

This book is about war, and as such it
will present some of the dilemmas, uncertainty, brash cruelty and senseless
insanity of war. In this cauldron every man reacts differently, some finding
the full measure of their courage and compassion, others finding the depths of
their cowardice and depravity. One should never be surprised that a loaded gun
fires a bullet, and that a bullet kills with no thought given to things like courage
and compassion. Given the record of history one thing is wholly apparent: the
only way a man can ever truly prevent that loaded gun from firing
is to never make one.

As to the ships, planes and men depicted
in this novel, while the ship and crew of
the Russian battlecruiser Kirov
are of my own making, every other ship and character mentioned, from the
highest officers on down to the lowest able seaman or pilot, is a historical
figure, placed exactly in the roles and locations where they served during the
action described.

On
a
late summer
day, August 5, 1941, President Franklin Delano Roosevelt boarded the yacht
Potomac
and slipped quietly away on what was scheduled to be a fishing trip to the
waters off the coast of New England. A day earlier, the Prime Minister of
England, Sir Winston Churchill, had declared a “Flag Day” and quietly canceled
official business at the House of Commons to get away for a supposed vacation
as well. Yet these were merely cover stories fed to the press to mask planning
for a secret meeting that would lay the groundwork for a new power structure in
a world that was embroiled in the greatest conflict in human history.

Churchill
boarded the destroyer HMS
Oribi
and traveled to the British Home Fleet
anchorage at Scapa Flow where he was discretely transferred to the battleship
HMS
Prince of Wales
. The great ship was the youngest daughter of Britain’s
powerful battle fleet, bloodied as a young debutant when she sailed on the arm
of Admiral Holland’s flagship HMS
Hood
, just two months earlier in the
hunt for the German Battleship
Bismarck
. In the engagement that followed,
the raw crew aboard the ship struggled in battle with the mighty German
battleship, witnessing the horror of the destruction of HMS
Hood
, with
the tragic loss of all but three of her crew.

Prince
of Wales
had
herself sustained damage from at least three 15 inch shells fired by
Bismarck
and four 8 inch shells from the heavy cruiser
Prince Eugen
. One shell
struck directly on the bridge, killing or wounding everyone except the Captain
and Chief Yeoman. The ship was driven off behind a covering screen of smoke,
and limped away to Iceland, conducting burials at sea for all those hands lost
in the action while in route. Yet, in spite of severe difficulties with her
main batteries, she had managed to wound the German ship as well, which
continued on into the North Atlantic trailing a wake of black oily blood.

Undaunted,
Prince of Wales
reached the dockyard at Rosyth for repairs, where
astonished engineers soon found an unexploded 15 inch shell lodged well below
the waterline near the starboard diesel room, like a sharp tooth of a shark
left in the wounded belly of the ship after her harrowing encounter with the
Bismarck
.
She was soon restored to health, patched up and re-armored, her guns dressed
out in fresh camouflage paint, and a new type 271 radar mounted on her upper
mast. The rest of the Royal Navy ruthlessly hunted down the German battleship,
sinking
Bismarck
on 27 May, 1941, finally avenging the loss of
Hood
.

Now,
her refit complete,
Prince of Wales
rejoined the home fleet, completed
gunnery trials with her sister ship
King George V,
and was ready for a
very special honor. The Prime Minister himself made his way aboard, there to be
joined by Admiral of the Fleet and First Sea Lord Sir Dudley Pound, Army
General Dill and Vice Air Chief Freeman, all bound for a rendezvous that would
lay down the political and geopolitical framework to govern the entire post war
world.

They
were sailing aboard
Prince of Wales
to meet their respective American
counterparts, for President Roosevelt was not going fishing that morning.
Instead he was to be joined by Generals Marshall and Arnold, and Admirals Stark
and King of the United States to embark on the heavy cruiser
Augusta
and
sail quietly out of Massachusetts Bay to points unknown. The old battleship
Arkansas,
heavy cruiser
Tuscaloosa,
and five more destroyers would join the
task force en route for an extra measure of defense.

Prince
of Wales
raced
out into the gray north Atlantic with three destroyers at her side to join the
American leaders for a scheduled meeting at Ship Harbor, Argentia Bay,
Newfoundland on August 9th, 1941. There they would discuss potential future
military cooperation, and set down guiding principles for how the world would
be governed by Anglo-American power after Germany’s defeat, which at that time
seemed a distant and chancy prospect. The document they drafted would come to
be called the Atlantic Charter, a series of seminal principles that would
underlay the founding of the United Nations.

Yet
on that fateful day, and unbeknownst to many, they secretly discussed something
more, the dark presence and mystery of a strange new interloper on the wide
Atlantic Ocean, a frightening new raider with awesome power and ominous intent.

“So long the path; so hard the journey,

When I will return, I cannot say for
sure,

Until then the nights will be longer.

Sleep will be full of dark dreams and
sorrow,

But do not weep for me…”

Admiral
Leonid Volsky
shifted uncomfortably in his chair as he stared out at the slate gray sea. There
was something wrong with the morning, he thought, and something vaguely
disturbing about this whole mission. He felt it from the very first, that vague
sense of disquiet within him that had dogged his thoughts all morning. What was
it?

The
mission itself was nothing out of the ordinary—a simple live fire exercise in
the Norwegian Sea. There had been so many before it, long, dull cruises
punctuated by a single moment of bravado when the missiles would catapult up
from the forward deck and rocket away, the men cheering them on as they went to
find the target barges to the south.

He
was waiting on K-266, the submarine
Orel
, scheduled to make its missile
firing at zero eight hundred hours, but
Orel
was late, and the Admiral
had become more and more impatient. The crew could see it in his eyes, dark
brown eyes, deep set under bristling low brows.
Orel
was late, and for a
man accustomed to tight schedules, itineraries, precise maneuvers required to
coordinate fleet actions, tardiness was inexcusable.

Leonid
Volsky was not happy. He was in his seat on the bridge of the most formidable
ship his country had ever put to sea, the nuclear guided missile cruiser
Kirov
,
flagship and pride of the Russian Navy, and he was about to unleash her
scheduled missile salvo for the exercise now underway. Thirty kilometers to the
south, the old cruiser
Slava
was towing a line of targeting barges, a
makeshift NATO task force, but hapless captain of the
Orel
had had
radioed to say that he was having trouble with one of his missiles. It seems
the crew had mistakenly loaded a 15 Kiloton nuclear warhead, and not the
required high explosive version designated for the target. The breach of
weapons handling procedures for nuclear armaments was unthinkable. The
incompetence galled him, and he let the
Orel’s
captain know exactly how
he felt about the matter, his deep voice loud and irritated on the radio, edged
with impatience, and carrying the considerable weight of his thirty years
command.

The
more Admiral Volsky thought about the exercise, the more he came to see in it a
reflection of his own nation's predicament at that time in history. Here he
was, in the pride of the Russian fleet, yet largely alone on the cold gray Arctic
seas. He was not in the warmer, busy waters of the Atlantic, nor in the tranquil
humid climes of the vast Pacific. No, the Russian fleet was consigned to
maneuver in these forsaken, icy waters, just as Russia herself had been
isolated by a new political frost that seemed to cover the world in recent
years. After conflicts with the Americans over Iran's nuclear program,
particularly involving the Russian fleet that had been sent to the Eastern
Mediterranean Sea, relations between Moscow and Washington had deteriorated
considerably. Sadly, the Russian Navy had deteriorated as well. It was no
longer the great threat that it had once been when the Red Banner Fleet was the
terror of NATO war games in the North Atlantic. This exercise seem pathetic to
him compared to the old days when he would sail with a full battle squadron in
a powerful surface action group accompanied by five to seven attack submarines
as well.