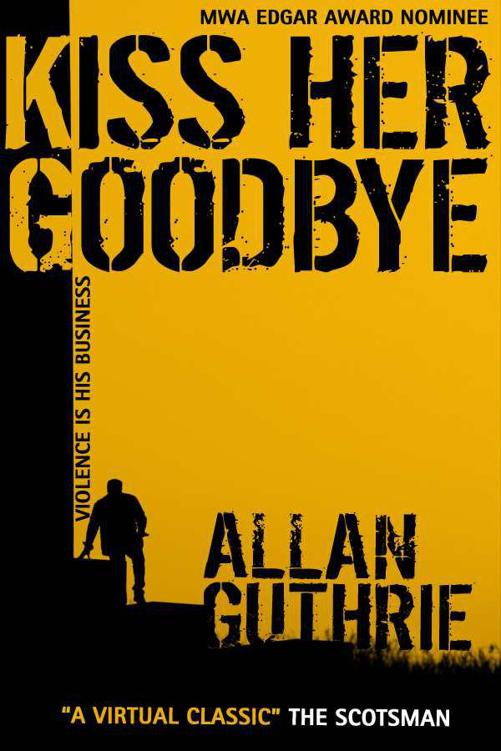 First published in the US by
Hard Case Crime
, 2005

All rights reserved. No part of this publication may be reproduced or transmitted in any form or by any means without permission of the author.

Allan Guthrie has asserted his right under the Copyright, Designs and Patents Act 1988 to be identified as the author of this work.

Also by Allan Guthrie on Kindle

Hilda's Big Day Out
UK
/
US

The day he found out his daughter was dead, Joe Hope was at Cooper's flat watching horse racing on Channel 4. Joe's filly was a couple of lengths off the pace with less than two furlongs to go. He yawned and cupped his hand over his mouth. They'd been working late. It was early afternoon, Joe had had hardly any sleep and by now the adrenalin of the previous night had all but drained away. He was hot and tired and thinking about saying goodbye and going home.

When the phone rang Joe glanced towards his old friend. Cooper's gaze didn't shift from the television set — one of those new flatscreen LCD jobs he'd bought just last week for two grand. Two grand for a TV! Joe hadn't said anything, and maybe it was just his tired eyes, but the picture seemed to have a permanent ghost and watching it was making him dizzy.

Joe yawned again. He was too old to get away with missing a night's sleep.

Last night they'd visited one of Cooper's clients, a mouthy young twat by the name of Billy Strachan. Billy was well behind on his repayments, and seemingly not too bothered by the fact. He had been overheard in his local calling Cooper a wanker and boasting that he had no intentions of paying back another penny. He advised Cooper, so the source had claimed, to come and make him, if he thought he was hard enough.

Cooper was a loan shark. Joe worked for him.

First rule of debt collecting: If you want to improve the odds on your client being at home, visit him at night when he ought to be curled up in bed, asleep. Second rule: Always carry a weapon.

Joe and Cooper, each carrying a baseball bat, had called on Billy Strachan at two in the morning. Although the noise of his front door being kicked in woke him up, by the time they'd burst into the sitting room, Billy had managed to stagger only as far as his bedroom doorway. With one hand he rubbed his eyes, while with the other he clutched a floral patterned quilt to his chest. He blurted out, "What the fuck?" as Joe ran towards him, then turned and was plunging back through the doorway when Joe placed a foot on the dragging end of the quilt. It tore out of Billy's grasp and fell to the ground. Naked, he stumbled towards his empty bed and looked around, now wide awake.

"Maybe you're thinking that this is just a bad dream," Joe said. "But you're not asleep, Billy."

Billy stood by the bed, protecting his balls with his hands.

Cooper raised the index finger of his left hand and flicked it from side to side. "That's what your eyes are doing. Know what I call that? Panic flicker."

Joe took a step towards the bed. Cooper was about to launch into one of his rants. Joe took another step, fully expecting Cooper to start on the stillness thing any minute. Billy was shaking like he'd been stuck in a freezer for a week. His gaze jumped from Cooper to Joe, back to Cooper.

Joe breathed in the smell of stale smoke. A heaped ashtray sat on a bedside table, sandwiched between a book on origami and a pack of Marlboros.

"You can judge a man," Cooper said, "by his stillness." He closed his eyes and stood perfectly still.

Joe watched him for half a minute. Cooper remained motionless and would continue to do so until Joe interrupted him in another three or four minutes. Nothing moved. Not a twitch from any of the overdeveloped muscles in Cooper's five-foot-six-inch frame. He appeared to have stopped breathing.

Billy Strachan read books on origami, for fuck's sake. Any minute now the poor bastard was going to piss himself.

Joe adjusted the grip on his bat and slammed it into Billy's knuckles. With a grunt, Billy crumpled to the floor just like the quilt had done. Joe hit the boy's ankle, kneecap, elbow in quick succession. Quick double-handers. Not too much power. Probably didn't break more than a couple of bones.

Cooper opened his eyes and glanced at Joe. "That was nowhere near five minutes." He gave a quick shake of his head and marched towards Billy Strachan. "We're going to kill you now, you little tosser."

"That isn't necessary." Joe put his hand on Cooper's elbow.

Cooper said, "Two minutes at most."

Cooper shook Joe's hand off and took a swing. Something crunched when the bat hit Billy's face and Billy stopped screaming. Cooper said, "Now he's got the message."

Joe nodded. Billy had got the message, all right. He was probably dreaming about it. If he could, he'd pay. If not, Joe and Cooper would be back. Quietly, Joe said to the unconscious figure, "You don't want to fuck with a man's reputation."

He didn't think Billy would be slagging Cooper down at his local for a while. At least, not until he got his teeth fixed.

Joe and Cooper left Billy lying on his side on his bedroom floor and drove to a classy brothel in the New Town. The Real Gentleman's Club was decorated like a Victorian bordello. Rumor had it that the curtains alone had cost eleven grand. In the waiting room, Cooper chose a slim young girl called Yvette and Joe went for a slightly chunkier and considerably older whore who called herself Annabella.

They climbed a flight of stairs. Cooper disappeared down the corridor with Yvette. Joe and Annabella climbed another flight. "In here," Annabella said. She opened the door and turned on the light. The room stank of incense. A parrot in a cage by the window squawked once, then was quiet. It obviously knew when to shut up.

At eight o' clock in the morning, six hundred quid poorer, Joe and Cooper left the Real Gentleman's Club and spent the next four hours at the Phoenix on Broughton Street sinking a few pints with whisky chasers. Winding down.

The ringing phone in Cooper's sitting room reminded Joe that he'd switched off his mobile last night in case Ruth phoned while he was working and he hadn't turned it back on yet. He dug it out of his coat and pressed the power button. The phone was several years old, chunky, with a dark grey plastic exterior. Cooper kept telling him it was about time he got a new one. It rang after a couple of seconds and Joe dialed his voice mail. A sexy electronic middle-class English voice told him he had sixteen messages. Well, well. Ruth had excelled herself. Normally she didn't leave more than ten. She must have had a slow evening. No way was he trawling through that lot now. He turned the phone off and slipped it back in his pocket.

Cooper's phone was still ringing. Joe might have answered the bloody thing, if this were his house. Probably some twat trying to sell double glazing. But it certainly wasn't Joe's place to answer Cooper's phone, even if the incessant ringing was becoming really irritating.

Eventually, Cooper glanced round the room and said, "Where is the little bint?"

Assuming Cooper was referring to Sally, his seventeen-year-old girlfriend, Joe told him, "She went out for a walk with the baby."

Cooper twisted his neck to look over his shoulder, somehow managing to keep his left leg draped over the arm of his olive green armchair. He shouted, "Sally?"

Joe had a headache. At the brothel he'd lain awake, hands clasped behind his head, listening to Annabelle's throaty snores. He guessed he'd slept for no more than an hour.

He closed his eyes and did his best to ignore Cooper's shouts and the phone's persistent ringing. Yellow lights strobed behind his eyelids. Tiredness muffled the various background noises. He could probably fall asleep now, if he wanted.

Joe forced his eyes open. "I saw her leave, Cooper." His friend was a real tit sometimes. "You think I'm making it up?" On the TV screen Joe saw his horse move from third to second. Only half a length behind the leader and gaining all the time. "Come on," he muttered. Under a furlong left.

Cooper tapped a fingernail against the side of his beer can. "She could've told me."

The ringing stopped. Joe breathed out, only then aware he'd been holding his breath. Almost immediately the phone began ringing again. He said, "You going to get that?"

"For Christ's sake. Keep what's left of your hair on." Cooper picked up the phone from the table inches from his hand. Listened, a puzzled expression creasing his forehead. He passed Joe the receiver. "Ruth," he said.

Joe filled his lungs, then exhaled through his nose. "Can't you leave me alone?" he said to his wife. His horse was challenging for the lead. "Come on."

She sounded hysterical. Her words ran together. He couldn't make out a damn thing she was saying. "What's the big deal?" he asked her. "I've been out all night before."

In reply she made noises that sounded like an unmusical child singing a difficult melody.

Was she jealous? Did she think he'd been sleeping with someone? "Ruth, take it slowly."

Once, a long time ago, she'd said, "Screw whoever you want, cause it won't be me." When was that? Ten years ago?

The noise stopped. Joe heard her catch her breath. She said, "Gem." She wheezed. Tried to speak. Choked. Tried again. Broke down, whining.

She thought he was talking to her. She managed to say, "Home. Please."

"Didn't catch much of it." Cooper's fingers drummed on the beer can. "Passed her on to you, eh?"

"Well done," Cooper said, tilting his beer can at the TV.

A hundred quid at four-to-one. Not bad for sitting on your arse drinking beer. Not bad at all.

Joe drove halfway across Edinburgh wondering what his little girl had done this time to upset her mother. Gemma was nineteen. A bright girl. But with only a year of university under her belt, she'd decided to chuck it in. Announced one day that she was leaving Edinburgh to stay with Adam Wright, a distant cousin of her mother's, for a while. When Adam's parents died in a car crash a few years ago, he had inherited a stack of money and bought an ugly old warehouse of a building on the outskirts of Kirkwall in the Orkney Islands. Entirely founded on having had a few stories published in women's magazines back in the early nineties, he set up a writers' retreat, and installed himself as a sort of literary guru. Ruth couldn't stand him. Probably because he'd once spilled red wine on her dress at a wedding reception. Gem, who had notions of becoming a poet, thought Adam was wonderful. And Adam was fond of her, too.

Sisters by Lynne Cheney
Farewell to the East End by Jennifer Worth
Destroy (A Standalone Romance Novel) by Adams, Claire
Sion Crossing by Anthony Price
I Waxed My Legs for This? by Holly Jacobs
Billionaire Alpha Romance: The Proposal (Mature Gentlemen Book 2) by Maurice Bedard
Turnstone by Hurley, Graham
Tutankhamun: The Book of Shadows by Nick Drake
The Genius Asylum: Sic Transit Terra Book 1 by Arlene F. Marks
Creep Street by John Marsden