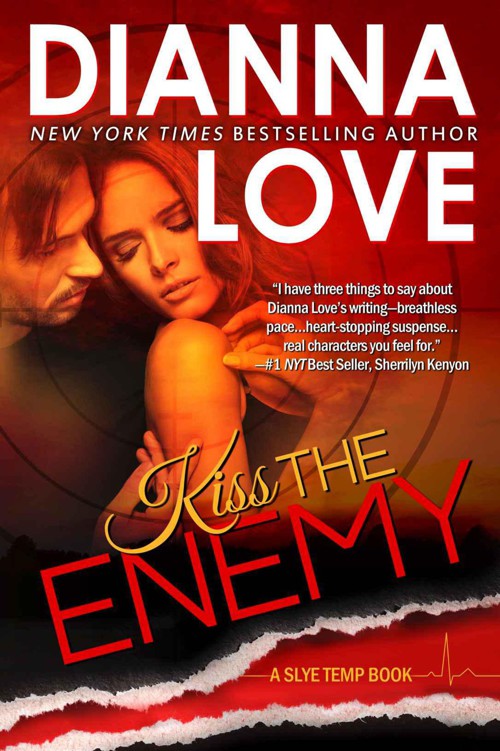 About LAST CHANCE TO RUN:

"LAST CHANCE TO RUN…reminded me of Cinderella.  Well, if Cinderella was on the run from a maniac killer and Prince Charming wielded a gun and flew a plane. Great read.  Check it out!"

"Brilliant!! Now THIS BOOK is what I LOVE about Romantic Suspense; a gritty suspenseful story AND enough steam to make me squirm (in a GOOD way :) )."

"Dianna never disappoints! … would have give it a 10 if they would let!!! Very enjoyable read, can't wait for the next one :-)."

"This is a lively and action-packed book, full of energy, danger and romance. The love story is tender … the action plot will satisfy the reader's thirst for danger.”

“I fell in love with the characters in this book. This story is chock full of action, white hot romance, shocking twists and intelligence.”

"Don't pick up this book if you only have a small nugget of time because it grabs you by the throat and won't let go!"

About HONEYMOON TO DIE FOR:

“Dianna Love pens an exhilarating romance woven with riveting characters and a plot that has more twists and turns than a roller coaster…one of those books that you wish would go on forever.”

“…constantly believable and packed with intrigue. HONEYMOON TO DIE FOR is suspenseful yet passionate and totally satisfying.”

“It seems with each book, this series gets better…(Love) has an uncanny ability of always creating wonderful characters that you care about… This was such a beautiful romance, one of the best I have read this year.”

Cover Design and Interior format by The Killion Group

For my husband, Karl, who has always been my champion and is the reason I can chase my dreams.  I can do anything with him by my side.

Marguax Duke exited first from the unmarked van parked on an empty side street in east Atlanta two blocks from tonight’s target. She lowered her night vision monocular into place as the rest of the six-person team spilled out behind her.

Black figures melded into the dark shadows and chilly night, all armed and deadly.

All moving on her intel of a meeting for payoff on a suspected terrorist attack to be carried out in Atlanta.

Today, as in less than twelve hours.

The meeting was going down in sixteen minutes. Margaux had shared every detail her snitch provided, with the exception of her hunch on who was making that payment.

At one time, her intuition would have mattered.

Sabrina Slye’s voice came through the comm sets everyone wore. “You’re absolutely
sure
about this intel, Duke?”

If this was about getting retribution for Margaux’s dead cousin, Nanci, she’d go on much less dependable intel. But this was about stopping a terrorist and she would not walk the team into danger for just a gut feeling. Sabrina had never questioned Margaux’s resources.

It rubbed that she did now, but Margaux pushed the mic switch clipped to her black molle vest and answered, “Yes.” She spoke in a soft whisper. The throat mic picked up the vibrations, and the sound came clearly through the earbuds of the team. “This came from my number one contact. He’s never been wrong in three years.”

No one else said a word. Tension pulsed through the silence.

That was telling in itself when any other time Nick and Dingo would have been ragging on her that she was picking up the beer tab if this was a bust.

She hadn’t been invited to share a beer in months.

She added, “This is the same informant who gave us accurate intel on the submarine sabotage we averted in Kitsap last December.”  An attack planned for Naval Base Kitsap on the Kitsap Peninsula in Washington, no less.

“Ten four.”  Sabrina’s brisk voice moved on with, “Time check. Oh-one-hundred.” She counted seconds until everyone on the team gave an affirmative.

Sabrina ran covert teams for secret national security operations under the cover of Slye Temp, an elite corporate security agency. A tough, but fair, leader who had zero tolerance for her agents going rogue for personal vendettas. She’d leveled Margaux with a steely gaze when she’d reminded the entire team of that unbendable rule just ten days ago.

Stop focusing on the Banker, a broker for international terrorism.

Ryder Van Dyke’s deep voice cut in on the comm unit. “One vehicle just arrived at Strident Global Imports.”  There was a pause while they all waited to hear more, then Ryder said, “No one’s getting out of the car yet.”

Ryder was team member number seven. He had a sniper position on top of the building across the street from an import company where the meet was expected to happen.

The snitch had discovered a link between Tio Giovanni, the ruthless leader of a New Jersey crime syndicate, and this import company, which accounted for the location of this meeting.

What was the mob doing for a terrorist?

Margaux could feel Sabrina’s gaze drilling through her confidence. She could not screw up the deal she had with Sabrina, the only person left who knew Margaux’s true identity. More than anything, Sabrina had helped her reclaim her life and had known how much Nanci meant to Margaux.

The team knew Margaux based only on what Sabrina had built for her identity. As for FBI Special Agent Nanci Tyler, the team had only known that Margaux had a rapport with a contact in the agency, but one that had to be kept secret. They understood her loss when Nanci was murdered, but not that it had been like losing a limb.

Margaux had been spending her off-time—and her money—hunting for the Banker. But when Sabrina finally made it clear that Margaux had to let go of her quest for vengeance, Margaux paid heed, because Sabrina was right.

The Banker had cost her enough.

That’s why Margaux had told her snitch she was no longer paying for intel on the bastard.

Tonight was about protecting innocent people and doing her part.

If this operation went sideways, which was always possible with one pulled together this quickly, she would take a bullet for Sabrina or anyone else on this team. Of the six elite operatives in this unit, Margaux was the only one truly expendable. With Nanci gone, no one would mourn her death.

She shoved that load of guilt back down in the cavity her heart used to fill and checked her Sig Sauer M11-A1 holstered beneath the black windbreaker. Her jacket might look like the FBI type, but hers had no agency initials and this wasn’t a sanctioned government mission.

Hell, this hadn’t even been a mission eighty-two minutes ago.

Ryder came back on the radio. “Three males exiting the sedan. One is staying by the vehicle. The other two are at the door of Strident and ... they’re entering the code for the alarm system. No other vehicle yet.”

That meant the first group was connected to Strident.

Sweat trickled down Margaux’s back with total indifference to the cold front sweeping Georgia in early May. Adrenaline pumped hard enough through her veins that she was numb to anything as insignificant as the temperature continuing to drop since midnight.

Sabrina’s tone sharpened. “Heads up. Dingo goes with me. White Hawk backs us up at the entrance. Nick’s with Duke at the rear with Tanner as backup.”

A bad feeling niggled at Margaux, that sixth sense an operative paid attention to if she wanted to walk away to fight another day. Maybe it was a case of doubting herself after Sabrina had questioned Margaux’s intel. She shook it off, getting her head in the game where it belonged when the team needed her.

Ryder had an update. “Second vehicle parking in the lot. No one exiting yet.”

Affirmatives followed all around, but Sabrina would hold off sending them until both men were in the building in case one decided to blow up the other.

Nick Carrera stepped across Margaux’s line of sight, standing a couple inches taller than her five-ten height. The only part of him showing through the black ski mask was a flicker of white around the eye not covered by his monocular, and his unsmiling mouth.

Margaux would question Sabrina’s choice for her partner du jour if not for Margaux’s having butted heads with everyone else for months.

Not that she didn’t like Nick. He was a solid partner and he didn’t butt heads. But Nick played by Nick’s rules and was a bit of a wildcard on a mission. It was hard to say exactly what he’d do in any given situation, but he did make things happen that often defied all probability.

Of course, he just as often did so in a way that created a lot of chaos along with the positive results.

Dingo Paddock stepped over to show Sabrina something on his smart phone. The Aussie’s ski mask covered spiked blond hair that looked out of place against skin the color of weak tea.

White Hawk, a Cherokee female operative and new recruit, stood off to the side. Dark brown hair cut short on one side and chin length on the other framed an oval face with high cheekbones passed down from generations of Native Americans. She was quiet, but in a way that said she was constantly engaged in threat assessment.

Word was that White Hawk had a knack for languages.

And for tailing a suspect.

Nick said she practically turned into a ghost when she shadowed someone.

Dingo, White Hawk and Sabrina left as one pack. Margaux, Nick and Tanner Bodine took off in a different direction to approach the building from the rear. Out in public, Tanner was a big rambling cowboy with an easy smile, but at night he could move like the wind when stealth was key.

The Whiskey Sea by Ann Howard Creel
Beauty from Pain by Georgia Cates
Blackout (Sam Archer 3) by Barber, Tom
Shadow of Death by Yolonda Tonette Sanders
Synthetics by B. Wulf
Midnight Before Christmas by William Bernhardt
Elysium by Jennifer Marie Brissett
The SteelMaster of Indwallin, Book 2 of The Gods Within by Doty, J. L.
Mississippi Jack: Being an Account of the Further Waterborne Adventures of Jacky Faber, Midshipman, Fine Lady, and Lily of the West by L. A. Meyer
Bound to Danger: A Deadly Ops Novel by Katie Reus