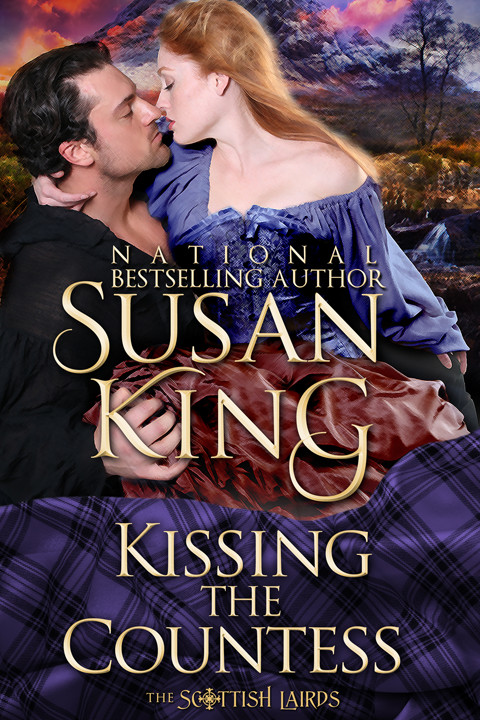 "With a little history, a little magic, and a lot of Highland charm, King has created another winner."

Copyright © 2015 by Susan King. All rights reserved under International and Pan-American Copyright Conventions.

Cover by The Killion Group
www.thekilliongroupinc.com

For Audrey LaFehr, my wonderful editor

This Highland pride is all I've got.

Between the burn and the turning sea

I gaze across at these golden hills

I'm looking all the way to eternity.

No trace of where we've come

No trace of songs we can hold for our young.

Lose our language to greed and gain

All washed away by a southern rain....

Many thanks go to Jennifer Wingard for sharing her considerable expertise in geological matters and for giving me a lovely fairy crystal for good luck.

I owe special thanks to Dougie and Jenny MacLean for warm Scottish hospitality—and again to Dougie for his inspiring music and a funny story about mountain climbing.

Along the road that curved beneath the fairy mountain, a hundred Highlanders came in slow procession. Some carried bundles on their backs and children in their arms; others rode in creaking, loaded carts. Sunlight filled the glen, dazzled over mountain snow and heathery slopes, gleamed upon the loch. Each man, woman, and child looked around to capture in heart and memory the beauty of Glen Shee, the Glen of the Fairies.

Catriona MacConn watched from where she stood on a high slope, arms crossed tightly as if to bind her heart and ease the ache within. She glanced at her brother, Finlay, who stared down at the long trail of people and carts, his hand fisted at his side. Tall and sturdy like his younger sister, his hair dark while hers glowed like bronze, he wore a jacket and kilt, his legs powerful from climbing hills. He was one of them, like she was.

Shading her eyes, holding back tears, Catriona looked toward the mature man who sat a dark horse by the roadside. The Earl of Kildonan merely watched as his factor rode beside the stragglers, hastening them onward with shouted commands.

Now a bay horse galloped across the glen toward them as another man rode toward the earl, drawing up to gesture angrily. Catriona frowned—she did not recognize this dark-haired man, but his well-cut clothing, the confident way he handled his horse, his boldness toward the earl was unlike the others. He was not afraid to engage in a hot dispute. A kinsman, perhaps?

"Who is that with the earl?" Catriona asked. "He's displeased about something. He has a wild look to him. Quite angry."

"That one? The earl's heir," Finlay replied. "George Mackenzie is his name. You will not recall, for you were young then, but he lived at Kildonan Castle as a lad, before the countess took her children and left her husband."

"Oh, the black-haired, shy lad who liked to walk the hills alone?" Catriona was glad for a distraction from the dismal sight of the procession—the clearance and eviction of the tenants by their own earl.

"He's been gone ten years or so, living in the Lowlands with his mother," Finlay said. "Mrs. Baird says he came back to ensure his inheritance, with his father selling land and clearing the crofts. No love lost between those two, says Mrs. Baird, since she's been working at the castle now."

"Like son, like father. Likely arguing about who gets the profits off the sheep that will now be running on the earl's lands." She sniffed. "A sad day when Highland lairds do not care for the dignity of their own people or for the land itself."

"It was not the way in the days of the chiefs, when the glen was a stronghold for Mackenzie warriors and their kin. The lairds of Kildonan always watched over their tenants."

"Nothing is as it once was," Catriona said, watching the cavalcade wend past the foot of the slope where she and Finlay stood.

Some of the women wailed, plaids over their heads in grief, and tears pricked Catriona's eyes. She placed a hand to her throat, holding back a sob. Many of those tenants were friends and kinfolk to the MacConns.

"If the Glen of the Fairies loses its humans, the
daoine sith,
the people of peace—the fairies themselves—will mourn," she said. "The magic and legends of this place, the beauty of these mountains, all will diminish. The fairies will fade from grief, so says Morag MacLeod."

"The fairies must be used to the clearings by now, Catriona," Finlay murmured, "with thousands forced out of their homes in the Highlands and Islands where their kin have lived for generations. It's been going on for decades."

Dark Heart by Russell Kirkpatrick
Beggars and Choosers by Nancy Kress
The Billionaire Heartbreaker by Mandy Baxter
Fullalove by Gordon Burn
Try Me by Parker Blue
SE Jakes Bound By Honor by SE Jakes
Party Girl: A Novel by Anna David
The Witching Craft (The Witches of Redwood Falls 2) by Janelle Daniels
The Palace of Laughter by Jon Berkeley
Mine to Crave by Cynthia Eden