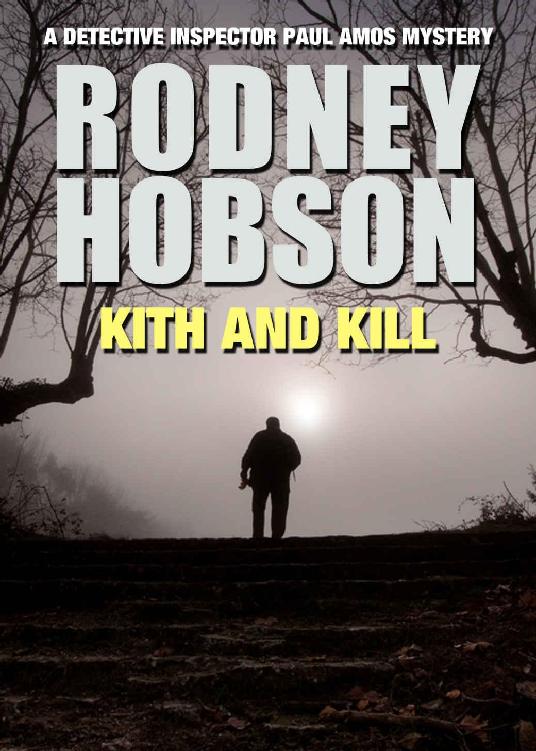 Rodney Hobson has asserted his rights under the Copyright, Design and Patents Act, 1988, to be identified as the author of this work.

Mark was the last to arrive, as usual. To make matters worse, he had brought his wife Agnes with him – or rather, she was bringing him.

Matthew ushered them into his front room, where four pairs of hostile eyes turned on Agnes. Ignoring them, she walked straight to a vacant chair and plonked herself down unceremoniously.

“Right then,” she said to Matthew. “What’s this all about?”

There was silence for a few moments before Matthew replied, somewhat embarrassed: “Agnes, this is a Wilson family matter. I specifically said that just the six children should attend. It is a matter that concerns just the six of us. It is very personal.”

“Mark and I have no secrets,” Agnes said firmly but without the slightest hint of indignation. “What concerns him concerns me.”

“It’s unfair to the others,” Matthew protested without conviction. “They all came alone – and they managed to get here on time. I even asked Jane to make herself scarce until we’d done.”

“Why don’t you go in the kitchen and brew us all a cup of tea, Agnes,” suggested Luke, the third of the three sons. “We’ll let you know when we’ve done.”

He, like Matthew, knew that it was pointless to demand that Agnes should consider the family’s wishes. She sat there, arms folded, looking round scornfully.

Finally she said: “Shall we get on with it, whatever it is?”

“The rest of us could reconvene,” Mary, the youngest of the family, said with unaccustomed defiance. “If Mark can’t speak for himself perhaps the other five can deal with whatever this is.”

Curiosity was aroused. The three sons and three daughters looked at each other. Agnes looked straight ahead, unmoved.

“All right,” Matthew said. “But I would be obliged, Agnes, if for once you could just keep quiet.”

Agnes looked at him and raised her eyebrows but she remained silent.

“It’s about Dad’s will,” Matthew resumed. “There’s something we need to discuss.”

“For heaven’s sake,” Ruth protested. “He’s hardly cold. We haven’t even had the funeral. Can’t it wait?”

“It’s not quite like that,” Matthew said calmly. “Dad gave me the will a few weeks ago. I think he must have known he was dying. It was in a sealed envelope and he made me promise not to look at it until after he was dead. All he told me was that as the eldest I was to be the sole executor.”

“Did you look at it?” Ruth, the eldest girl, asked tartly. “Before he died, I mean.”

She looked at Matthew intently.

“Unfortunately I didn’t,” Matthew said testily. “If I had done so we would have avoided the reason why I asked you to come today. There is a problem with the will.”

The others in the room stared at him.

“What sort of problem?” Ruth asked, forgetting the impropriety of inquiring about what was in the will while her father was, in her own words, hardly cold.

“Dad left everything to be divided equally between his children. That is stated clearly and I have no doubt that was his wish.”

“So what’s the problem?” Agnes asked impatiently. “For heaven’s sake get on with it.”

“Shut up, Agnes,” Luke said rudely. “This has nothing to do with you. He was not your father.”

“Dad appointed me the sole executor. It is my job to see that his wishes are adhered to and, in all respects except one, it is a simple and straightforward document. Unfortunately, when he wrote that he was leaving everything to his children, he actually listed them by name.

“He wrote down only five names. One name is missing.”

Matthew paused and looked round the room. The other six, even Agnes, stared at him and said nothing for several seconds.

It was Mary who spoke first.

“I bet it’s me. I did everything for him after Mum died and he took it for granted. You all did and this is the thanks I get.”

“Well come on then, who is it?” Agnes demanded. “Who drew the short straw?”

Matthew stared at her coldly and ignored her interruption.

“I have been thinking about this for several days, since Dad died,” he continued, “and I have a proposal. I’m not going to say at this stage whose name is missing so that it will not influence your decision. I can tell you that not even Jane knows.”

“You are not entitled to anything Agnes. You are not even entitled to be at this meeting. He was our father, not yours, and I really am not tolerating any further interruptions from you. I am the sole executor and I am not obliged to show the will to any of you, although I intend to do so once this issue is settled.

“I propose that we each sign a letter saying that we agree to split the estate equally six ways. The person whose name is missing will keep the letters. If everyone agrees, that is what we will do. However, if any one of the six of us objects, then the will stands as it is written and one of us loses out.”

“Well, you’ve always gone on about my gambling,” Luke said. “I’m inclined to take a chance it’s not me. It adds a bit of spice to proceedings.”

“There’s no need to decide now one way or the other,” Matthew replied. “Today is Thursday and the funeral is on Monday. Let’s get the funeral over with and let us meet again here next Thursday at the same time. Those who agree bring your letter with you. I repeat, though, that we need to be unanimous if we are all to be treated equally.”

In the event, however, the meeting did not take place. By the following Thursday, Matthew Wilson was dead.

It had been a slow day for crime and Amos felt slightly guilty that he had wandered out for a stroll after lunch, convincing his conscience that he worked enough unpaid overtime to merit an extended break when work was slack.

Amos took Detective Constable Susan Smith with him. She was new to the force so the experience would be useful training. Besides, it was usually best to have a female officer with you in cases of sudden death to soothe any distraught relatives and there was no point in calling in his second in command, Detective Sergeant Juliet Swift, for what was likely to be, from a police point of view, just a routine open-and-shut case.

It was quite possible that no crime had been committed, so why spoil Swift’s day off?

The two officers were greeted at the hospital by Dr Philip Moore, who explained that he was in charge of emergency admissions. A middle aged man had been pronounced dead on arrival.

“The dead man is Matthew Wilson, aged 61. His wife brought him in. It seems they were driving back from a funeral at the cemetery when her husband started to act in a peculiar fashion: he became disoriented, couldn’t remember who he was, said he was floating above them.

“Luckily it was the wife who was driving because the husband had been drinking at the wake and she thought at first that he was just drunk. Unfortunately, that meant she didn’t bring him to the hospital straight away but when she got home she couldn’t get him out of the car and then she started to get seriously alarmed. By the time she had driven him here, he was in a coma.

“Our paramedics tried to resuscitate him but we couldn’t save him. He died in the car.”

Ah yes, Amos thought. Always make sure he’s dead on arrival. That way no-one can blame the hospital and no-one can object to a post mortem because he didn’t die under medical care. Very convenient.

“So what makes you think the death is suspicious?” Amos asked.

“I can’t be sure until we have the results of toxology tests,” Moore replied, “but from what Mrs Wilson has told us, it sounds to me like ketamine. I think Mr Wilson was poisoned.”

“Ketamine?” he said thinking hard. “Isn’t that the stuff you give to horses?”

Moore confirmed that the substance would be found in a hospital for animals rather than humans.

“I take it Mrs Wilson is still here?” he asked.

“She’s in a bit of a state, as you can imagine,” he said. “We’ve put her in an empty side-ward and a nurse is calming her down.”

“I’ll have to see her,” Amos said. “I take it she knows her husband is dead.”

“Yes, but she doesn’t know I think it’s poisoning so I suggest you go easy on her,” Moore said firmly. “I can’t stop you talking to her because technically she isn’t a patient here but she’ll go to pieces if you go in like a blunderbuss.”

Still believing that the case would present no difficulties, Amos was in a relaxed mood, so he smiled sweetly and assured Moore that he would go easy.

Smith proved to be an impressive comforter and after introductions and a few minutes of reassurance Mrs Wilson was sufficiently composed to relate what had happened.

She gave her name as Jane Wilson and her address in north Lincoln near the cathedral.

“Take your time, Mrs Wilson,” Amos said gently. “Tell us in your own words what happened.”

Jane stopped short, trying unsuccessfully to hold back the tears. Smith comforted her and Amos eased off to give her space to recover.

Taking Smith along proved to be an inspired decision. She was rapidly building a natural rapport with Mrs Wilson, thus boosting the confidence of both of them. After a few minutes the newly bereaved widow felt able to continue.

“Tell me about the funeral,” Amos said quietly. This would pull her temporarily away from the death of her own husband towards someone who was, presumably, close but not her blood relative.

“It was a burial at St Swithin’s Cemetery,” Mrs Wilson said.

Amos nodded. He knew it, a few miles south of the city centre down the A15, an extension of the Old Cemetery that had filled up long ago.

“We had a service first at the Methodist church Matthew’s Dad attended until he was too ill to go. Matthew wanted to go straight to the cemetery and have the family just say a few words at the graveside and his brothers agreed, because none of them were religious like their parents, but Mary was adamant that there had to be a chapel service as well.

“Her sisters wavered but they all eventually gave way. Matthew was so impatient to get it all over with. I wish we had. He might still have been here now. I think the strain was too much for him.”

Jane Wilson broke off again in distress. She apparently did not realise that her husband had probably been killed deliberately and if they had “got it all over with” more quickly he would presumably have died sooner rather than later.

“I’m sure you did the right thing,” Smith said. “You would always have regretted not giving your father-in-law the parting that he would have wanted.”

Red Jack's Daughter by Edith Layton
Unbound (The Griever's Mark series Book 3) by Hurley, Katherine
Mary Brock Jones by A Heart Divided
Everran's Bane by Kelso, Sylvia
The Beacon by Susan Hill
The Spirit Room by Paul, Marschel
Shadow of the Wolf by Kelley, Anastacia
Wyvern's Prince (The Dragons of Incendium Book 2) by Deborah Cooke
The Troop by Nick Cutter
The Beach House by Jane Green