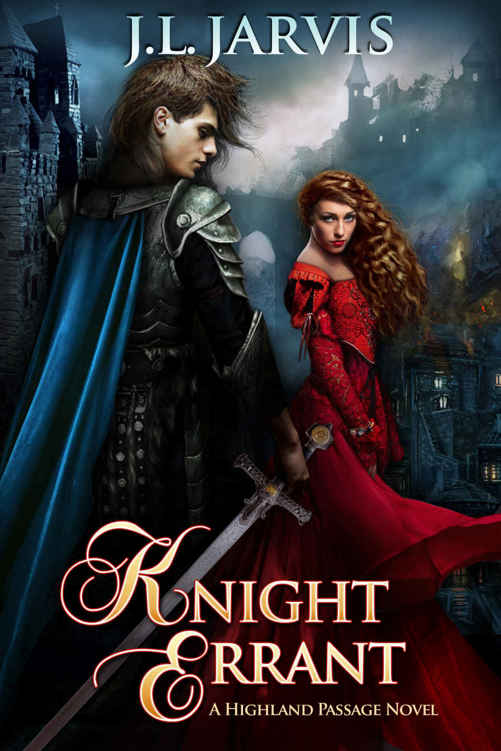 4.
A Matter of Chivalry

9.
The Return to Perth

L
ightning strikes an ancient stone chamber, thrusting cyclist Violet Quinn back in time. Emerging amid the frenzy of the Scottish Reformation, her life is at risk as she searches for a way home.

Enigmatic knight errant Robert de Mallay is on the most important mission of his life: protecting an ancient secret. He detours to rescue a beguiling young woman in peril. Now both are in danger as they fight off pursuers, all the while knowing that completing the mission will part them forever.

Their greatest battle of all will be against their own hearts.

This book is a work of fiction. Names, characters, places, and incidents are products of the author’s imagination or are used fictitiously. Any resemblance to actual events or locales or persons, living or dead, is entirely coincidental.

The scanning, uploading, and distribution of this book via the Internet or any other means without the permission of the publisher is illegal and punishable by law. Please purchase only authorized electronic editions, and do not participate in or encourage electronic piracy of copyrighted materials. Your support of the author’s rights is appreciated.

“
D
o me a favor and burn the sheets when you're done.” Violet Quinn stood in the doorway, too stunned to move.

The couple in bed bolted upright. The young woman clutched the sheet to her chest while the man locked eyes with Violet.

“I thought you were coming home later,” he said.

She glanced at the woman. Disheveled brown hair. Pretty. Then she fixed her attention on Jack. His eyes were dark with self-pity. At first all Violet could manage to do was to absorb the shock and resulting nausea without sinking to the floor in a heap.

But from somewhere deep inside, she found strength enough to form words and express them with a dignity she did not feel. “I got done early and thought I'd surprise you.” She smiled. “Nailed it. As did you.”

Dignity was way overrated. She turned to leave.

He started to get up, but she stopped him with one pained stare. “Good-bye, Jack.”

By the time he had reached for his jeans and pulled them on, she was gone, and he gave up the chase at the doorway.

“Agh!” she groaned when she got outside.

Jack's car was blocking hers. He had dropped her at the airport and planned on picking her up, which at the time, she had thought was so thoughtful of him. How sweet. She now realized he had merely been making sure she wouldn’t arrive home to spoil his fun. But an early flight and a car service had foiled those plans. And now she was trapped. Violet looked at the garage. She did have her road bike. She didn't typically wear a silk tunic, leggings, and flats to go riding, but then again, she didn't usually find her boyfriend in bed—her bed—with another woman so… what the heck. This was as good a riding outfit as any. So off she went on her bike, down the winding country road.

As Violet made a right turn, the idea took root. What better time to get away. Far removed from the distractions of everyday life, she could reconsider her life choices. And cry.

Then the sky opened to release a deluge.

She glanced up, her tears mixing with raindrops. “Really?”

Lightning answered, followed two seconds later by thunder. The sky took on an ominous greenish hue, and she knew that she had to seek shelter. She glanced back toward her house. No, she wouldn’t go back there. Around the next bend in the road was a stone chamber—one of the mysterious structures scattered about Putnam County, NY, for reasons no one quite knew. There were all sorts of theories, some paranormal—not that she was the sort to buy into such far-fetched ideas. No, she was in the camp of those who thought the stacked stone enclosures were simply root cellars erected by settlers, though others claimed they were too old for that. Either way, this one would shelter her from the rain that would soak her if she didn’t find cover soon.

Propping her bike against the stone chamber’s entrance, she went farther back, past a puddle, and sat on a rock. Only then did she let herself cry, and she did a fine job of it—cursing included. She loved him, or thought she did, until she saw him from the doorway, ass bobbing under the Egyptian cotton duvet. They'd bought that bed together when Jack moved in. He had swept her from her orderly life into a rush of passion that, damn him, still made her breathless to recall. Now she would have to take that magnificent bed to the carting company for disposal. How could she have let herself trust him? She had fallen too fast and was now paying the price. Taken in by Jack’s good looks and charm, she had made a huge error in judgment. She wouldn’t let that happen again. Next time—no, there wouldn’t be a next time. She was finished with men. Too tired to think, she just cried. Elbows on bent knees, she buried her face in her hands and just let it all out.

A loud boom shook the ground as lightning arced from the stone wall to the wet ground. Then everything went black.

V
IOLET LAY STILL
as light birdsong interrupted the silence. She opened her eyes just a crack, as though one move might break her. When she mustered the courage, she moved gingerly. Fingers and toes first then hands, arms, and ankles. Everything seemed to work. As she did so, the image flashed through her mind of the violent surge that had gone through her body. She must have been struck by lightning. What else could it have been? And why not, when the day had been so utterly perfect already? Why break the momentum?

Feeling shaky, she sat up and took in the sight beyond the stone chamber, which looked, from the inside, much larger now. Outside, a river flowed past in sharply cut angles as glints of bright morning sun flickered against the pale coursing water. Beyond, the land stretched out in a soft upward slope to meet the thick woodlands beyond. None of it looked the least bit familiar.

Violet forced herself up and went to the opening of the chamber to retrieve her bike, which she’d left propped against the outside wall. With a gasp, she stopped short and looked down. Where the heck was the ground? The stone chamber now opened to what looked like the side of a cliff. She flattened her back against the wall of the cave until her head and stomach stopped whirling. Breathing in deep, measured breaths, she forced herself to calm down.

“Okay. Okay, so the ground's opened up. An earthquake? But what about that flash of lightning? It doesn't matter. I just need to find a way home.” She looked about, still not quite her logical self. If there had been an earthquake, she needed to get out before an aftershock followed.

Violet had long ago tried to conquer her fear of heights. She had mastered the rock-climbing wall on a cruise ship a few years before. Once after that, she had started to climb the Shawangunk Ridge. But the Gunks were steep. She didn’t have much of a death wish, so she wimped out. She lost a boyfriend over that. He was looking for a woman who would go on mountain-climbing adventures with him, and she wasn’t that girl. His cute climber’s ass notwithstanding, it wasn’t meant to be. They were from two different worlds, hers being on the ground. Oh, well, just another in a series of failed could-have-been loves.

Violet inched her way to the edge and looked out. “It's not totally vertical. And that might be a path.”

Her stomach sank as she contemplated the climb. It wasn’t quite as steep as the cruise ship rock-climbing wall, and she had climbed that more than once—well, just twice. But she had been harnessed to a rope to catch her if she fell.

Violet stepped out of the cave. She found a foothold and a tree branch to hang onto. She could do this. One foot after the other. No big deal. But the distance to the ground below was a big deal, and a dizzying one. Violet carefully made her way down, foothold by foothold, taking time out to hug the cliff face until a moment of panic subsided.

She held on and pressed her face to the stone. “I usually get taken to dinner before this much full-frontal contact.”

When she summoned the courage to take the next step, a rock moved under her foot. She gasped and held on by the tips of her fingers.

“That's the plan.” She clung to the rock, too afraid to move to see who had spoken.

A moment passed. “Are you all right, mistress?”

Too terrified to move, she said, “I've been better.”

“Give me your hand.” His rich voice sounded sure.

When she didn’t reach for him, he moved closer and put his hand over hers. His touch, strong and warm, made her feel safe—the same way Jack's touch used to do. The image of him in her bed with that woman flashed before her, but she willed it away.

His quiet confidence brought her back to her current predicament. He gently eased his fingers about her hand until she grasped his hand. She glanced to her side, and soft gray eyes met hers. Deep set and calm, those were the eyes of a man she could trust—with her life, anyway. Not with her heart. She would never again trust a man with her heart.

The path widened in front of some foliage that grew from a fissure. He guided her there then talked her down, step-by-step, handhold-by-handhold until they arrived at the ground, where she flung her arms about his neck and clung to him, trembling and too relieved to be on terra firma and in a sturdy embrace to think of anything else. He held her securely until her heart stopped hammering and her breathing grew steady. Then his arms stiffened, and he stepped back.

“I'm sorry!” Violet stepped back and held her palms toward him, doing her best to regain her composure. She shook her head and, with a feeble smile, met his eyes. He looked awfully concerned—for her sanity, no doubt. “I’m so sorry. I kind of lost it there for a minute. It was nothing—just the terror. I'm fine now. Thank you.”

His troubled demeanor gave way to a courteous bow. “Robert de Mallay, at your service.”

She took the bow well, but when he lifted her hand and kissed it, her knees buckled. She blamed that on not having had anything to eat since her airplane pretzel breakfast. “Violet Quinn.”

One Part Human by Viola Grace
Lady In Distress (The Langley Sisters Book 3) by Vella, Wendy
Chatham Dockyard by Philip MacDougall
Waking Up Were by Celia Kyle
The Alpine Legacy by Mary Daheim
Little Chicago by Adam Rapp
Flight by Bernard Wilkerson
Fairchild by Jaima Fixsen
Island Christmas by Kimberly Rose Johnson
Wherever There Is Light by Peter Golden