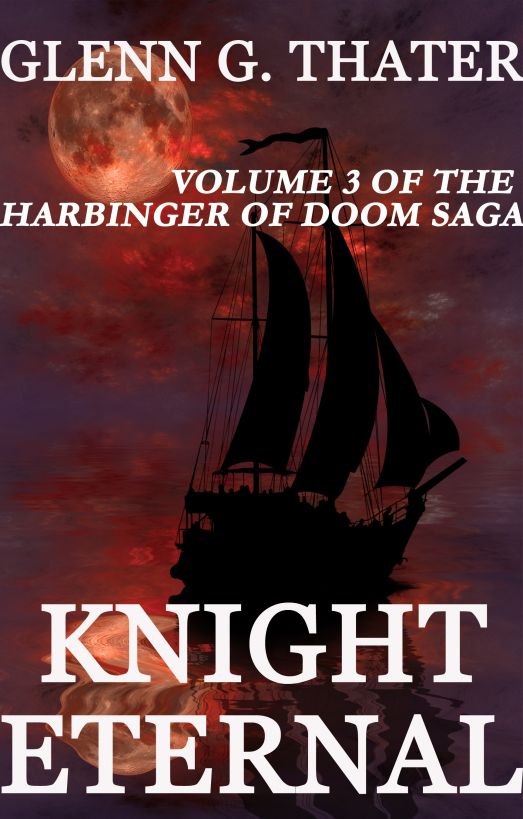 This book is a work of fiction. Names,
characters, places, and incidents either are the product of the
author’s imagination or are used fictitiously. Any resemblance to
actual persons, living or dead, events, or locales is entirely
coincidental.

This eBook is licensed for
your personal enjoyment only. This eBook may not be resold or given
away to other people. If you would like to share this book with
another person, please purchase an additional copy for each person
you share it with. If you are reading this book and did not
purchase it, or it was not purchased for your use only, then you
should purchase your own copy. Thank you for respecting the hard
work of this author.

This book is also available
in paperback

THE HARBINGER OF DOOM
SAGA

DWELLERS OF THE DEEP

THE HERO AND THE FIEND

(A novelette set in the Harbinger of Doom
universe)

(A novella length version
of
Gateway to Nifleheim
)

The Orb of
Wisdom

Not Long for
Valhalla

The last few years were
big for Thetian scholars. In 2006, Dr. Frank Smithwick of Brown
University completed his long-awaited translation of the Fifth
Scroll of Cumbria, long thought lost until donated to the
Smithsonian in 2001 by a private collector. Professor Smithwick’s
painstaking translation of the twelve hundred year old documents
revealed for the first time the lost tale of Angle Theta’s
relentless pursuit of Korrgonn following the Gateway incident. A
portion of that translation, which I’ve updated into modern prose
for readers of fantasy literature, forms the core of this
book.

In 2007, archeologists
from the University of Chicago discovered a cache of inscribed
stone tablets in a cave excavation in the mountains near Grenoble,
France. Carbon dating of pigments used in the inscriptions
indicates that the tablets were created sometime between 2,400 B.C.
and 2,600 B.C., making them some of the oldest written records of
Thetian lore thus far found in western Europe. A crackerjack team
of researchers from the University of Maryland at College Park, the
University of Chicago, and Brown University, collaborated to
translate the Grenoble Tablets in record time, their work revealing
many previously unknown stories centered on members of The Shadow
League. Two of these brief tales form the basis of the chapters
herein entitled, “Born Killers” and “The Orb of Wisdom”.

These latest discoveries, coupled with other
sources such as the Ningshao Jade Collection, the Olmec and Kish
Tablets, the Derveni Papyri, the Scrolls of Corsi and Burdur, and
others, conclusively demonstrate that despite these stories being
relatively unknown today, the Thetian tales were widely read and
reproduced for thousands of years throughout the ancient world.
Thus, the influence of Thetian literature on mythology, folklore,
and cultural traditions across the globe should not be
underestimated and warrants significantly more scholarship.

2008 saw the publication
of my novelizations of
The Gateway
and
The Fallen
Angle
, two tales that have long lived in
the core of Thetian canon, but which had never before been adapted
into modern prose for the general public.

The hundreds of emails and
messages I have received from readers of these tales have inspired
me to continue to bring these fantastical stories to print. Some
categorize these tales as mythology, others call them sword and
sorcery or heroic fantasy, still others name them weird tales, but
to me they are historical fiction, part of the rich but sadly
little known literary legacy of the ancient world.

I hope that you enjoy this
next installment of the Harbinger of Doom saga, entitled,
Knight Eternal
. Happy
reading.

“
Mine is a perilous road;
those that walk

it with me are seldom long for Valhalla”

Ob flung the door open.
“You can never tell anyone what I’m about to tell you, boy, or you
and me both will get killed dead.”

Claradon, pale and
drained, and generally unkempt, rolled his eyes and stepped into
Ob’s chambers. The old gnome looked even worse than Claradon did,
his arm heavily bandaged, his face battered and bruised.

“
There is much I’ve a mind
to tell you, but I’ve got to lie down, my back is killing me.” Ob
closed the door and made his way through the large, cluttered
sitting room toward his bedchamber. Claradon followed, though his
thoughts drifted to the events that had just ravaged his
life.

A few days prior,
fanatical cultists gathered in secret in the Vermion Forest near
the fortress of Dor Eotrus in the Kingdom of Lomion. Wielding
ancient, forbidden magics, they opened a dark portal to the outré
realm of Nifleheim, the very hell of myth and legend, allowing
demons and their masters, the Lords of Nifleheim, to enter
Midgaard, the world of man.

Ignorant of the cultists’
activities, Aradon Eotrus, Lord of the surrounding lands and vassal
to King Selrach Tenzivel, led an elite force of knights, wizards,
and woodsmen into the Vermion to investigate reports of strange
goings on. Amongst Aradon’s veterans was the renowned Archwizard,
Par Talbon of Montrose, the Master Ranger, Stern of Doriath, and
Dor Eotrus’s High Cleric, Brother Donnelin. For all their skills
and courage, not a one returned.

In response, Brother
Claradon Eotrus, eldest son of Aradon, gathered a troop of knights
led by his mentor, Sir Gabriel Garn and his friend Ob the gnome.
They were joined by an enigmatic foreign soldier called Lord Angle
Theta. Together, they set out to learn Aradon’s fate.

Hidden within a magical
fog, deep within the Vermion, the group discovered the gruesome,
mutilated, nigh unrecognizable remains of Aradon Eotrus’s party
outside an ancient, otherworldly temple. Plagued by a frigid,
choking mist and mind-rending din, Claradon and his comrades
assaulted the Temple of Guymaog, but arrived too late to secure the
portal between the worlds.

With the gateway opened,
three Lords of Nifleheim and a horde of lesser fiends trespassed
upon the world of man for the first time since the very dawn of
history. These monsters of Nifleheim had long filled man’s tales of
terror and plagued his nightmares, but had been only myth and
legend. Now all that had changed. Monsters were real. Men’s minds
broke.

Bhaal of Nifleheim slew
many brave knights before Angle Theta drove him back through the
gateway with a magical lance—a relic of times long past. Mortach of
Nifleheim bounded through the temple and escaped, later to join
with the cultists that had opened the gateway. Sir Gabriel,
greatest hero of the realm, died by the hand of the Nifleheim Lord,
Gallis Korrgonn, while saving Claradon’s life. Worse still,
Korrgonn’s life force passed into and took control of Gabriel’s
body, and enabled his escape into the night.

To close the doorway to hell, Claradon
located and destroyed the shard of darkness that held open the
gateway, sealing it forever.

After the brutal battle,
the few survivors returned to Dor Eotrus, and at the wizard Par
Tanch’s urging, concocted a tale of rampaging mountain trolls to
explain the night’s tragic losses. Tanch warned that no mention be
made of magic or sorcery and the like, as the government harshly
suppresses the truth of such things, while the common folk believe
them little more than children’s tales and ancient
legends.

That very evening, while
the knights of House Eotrus began preparations to return to the
Vermion to take up the trail of the remaining two Nifleheim Lords,
Ob called Claradon to his chambers where he was recuperating from
his injuries.

Ob’s chambers boasted a hardwood floor,
stained to a rich, walnut hue, though much of it was covered by
teetering piles of books of every size and description–the overflow
from the brimming shelves that lined the walls.

Well-tended fireplaces in both sitting room
and bedchamber heated the apartment. Warm and cozy, the rooms, as
always, smelled vaguely of pipe smoke. Empty wine bottles of exotic
vintage were proudly displayed atop the mantles and the wardrobe.
The more recent bottles overflowed the trash bucket, awaiting their
ultimate fate.

All the furniture in Ob’s bedchamber was
sized appropriately for one of his stature, save for the bed, which
was massive and high off the floor.

Ob stepped stiffly up a little four-step
ladder and hopped onto the bed with a groan. He settled down on the
thick mattress, wincing with every movement.

He reached out for his ale mug, but his hand
met only empty air. “Darn.”

The finely crafted night table beside the
bed was gnome-sized and far below Ob’s reach high atop the bed.
“Would you mind, boy? Give the crank beside the table a few
turns?”

“
The crank, down there,”
said Ob, pointing down to a handle sticking out below the night
table.

Claradon squatted down. Beneath the night
table was a curious wood and metal contraption. Claradon turned the
handle and the table rose smoothly up. Several more turns and the
tabletop rose up to within Ob’s easy reach.

“
I had Donnelin make it
for me. Cost me a bottle of ’64. Worth it though, or else I’d break
my neck leaning down for the mug. That fellow was always
handy.”

“
I will miss him. I will
miss them all, dearly.” Ob looked over to the large color portrait
that hung on one wall. Aradon Eotrus stood in the center in full
battle regalia; Gabriel, at his right hand, similarly clad; Ob at
his left; then Brother Donnelin, Par Talbon, and Stern to either
side, all wearing their finest, their features captured almost
perfectly.

“
The gaming table is still
set,” said Ob. “Just the way we left it. Me and Gabe were winning,
but the others were giving us shot for shot. Now we’ll never finish
it. Not ever.”

Ob grabbed a handkerchief from the night
table and loudly blew his nose. Tears filled the old gnome’s
eyes.

“
We were together a long
time, that group. Every one of them was like a brother to me. Now
I’m the only one left.” Tears streamed down Ob’s face. “They’re all
dead, all of them.”

The Secret of Fatima by Tanous, Peter J;
At Hidden Falls (Angel's Bay Novel) by Freethy, Barbara
Dirty Little Liars by Missy Lynn Ryan
Passion's Promise by Danielle Steel
Warrior's Last Gift by Melissa Mayhue
There Once Lived a Woman Who Tried to Kill Her Neighbor's Baby by Ludmilla Petrushevskaya
The Brawl by Davida Lynn
From the Fire by Kelly, Kent David
La gaya ciencia by Friedrich Nietzsche
Can Anybody Help Me? by Sinéad Crowley