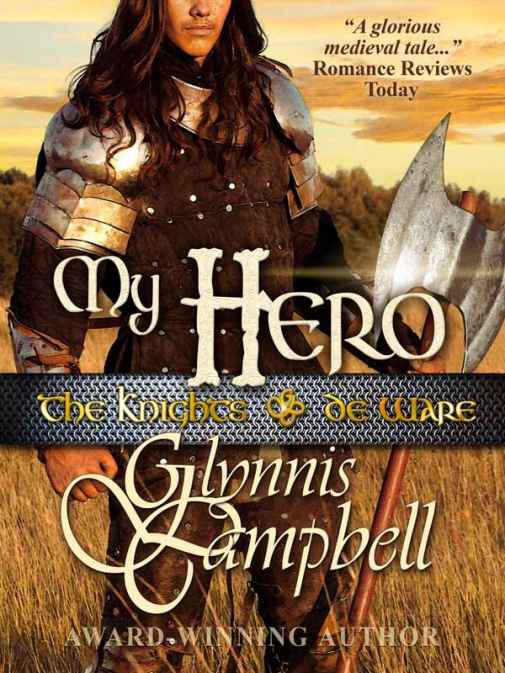 At least that explained Cynthia’s imprudent presence here. But Garth’s cursed body didn’t know the difference. Blood surged to his loins. “Go back to your chamber.”

“Nay,” Cynthia said, rushing forward. “You don’t understand. It’s all right now.” She pressed her palms flat upon his chest and gazed up into his eyes. “It’s perfect.”

Garth had no idea what she was babbling about, and he suspected neither did she. “Go now, Cynthia. Go.”

She looked dismayed for an instant. Then sudden inspiration sparked in her eyes. “Kiss me!”

His gaze dropped involuntarily down to her mouth, that wide, sensuous mouth that probably tasted of fine ale. “Nay, my lady.”

“Then I shall kiss you.”

It would have been unforgivable to jerk away from her then. Particularly when she looked so naïve and vulnerable, weaving on her feet. It would have hurt her. At least, that’s what he told himself. But he should have recoiled as if from fire. Instead, he let her raise her mouth to his…

This work is a work of fiction. Names, places, characters and incidents are the product of the author’s imagination or are used fictitiously. Any resemblance to actual events, locales or persons, living or dead, is coincidental.
Copyright © 2002 by Glynnis Campbell
E-book Copyright © 2012 by Glynnis Campbell
Smashwords Edition
All rights reserved. No part of this book may be reproduced in any form or by any electronic or mechanical means, including information storage and retrieval systems, without permission in writing from the author, except by a reviewer who may quote brief passages in a review.
Book design and illustration by Richard Campbell
Glynnis Campbell – Publisher
P. O. Box 341144
Arleta, California 91331
ISBN-10: 1938114035
ISBN-13: 978-1-93811403-8
Contact:[email protected]

To my mom…
For open arms and healing hands—
Haven for my spirit,
Champion of my dreams,
Hero of my heart

“Boys,” Cynthia le Wyte muttered under her breath, slamming the heavy garden gate behind her, narrowly missing the embroidered edge of her best surcoat. “I’ll
never
marry such an intolerable creature.”

She’d had about all an eleven-year-old girl could endure of the de Ware boys. How she wished she’d stayed home with her mother. If Duncan de Ware wasn’t taunting her with verses about her unfortunate orange hair, his brother Holden was threatening to lop off her locks with wild swings of his ever-present sword. Thankfully, Lady Alyce had given her the key to the privy garden this morn, or she’d still be dodging the attacks of the de Ware knaves.

She leaned back against the warped oak door and tucked the key into the deep pocket of her velvet surcoat, listening for sounds of pursuit. To her relief, none came.

Satisfied that she was no longer playing the fox to their hounds, she stepped forward to survey her sanctuary…and fell instantly in love.

Before her stretched the garden of an enchantress. Graceful willows and fruit trees—apples, warden pears, plums, damsons, and cherries—sprang from beds of fragrant mint. Delicate blossoms, some as white as frost, some blushing pink, permeated the warm air with a heady perfume that dizzied her.

In a sunny spot, kitchen herbs and vegetables thrived—rows of radishes and neeps, parsley and peas, cabbage and fennel, garlic and pasterniks, sage and rosemary and thyme.

Colorful primroses nestled at the foot of tall stalks of purple iris. Violets and borage ran riot over a patch of wet earth along the west wall, and marigolds popped their bright faces up amid sprawls of lavender and heliotrope. Row after row of lilies and daffodils marched at the north border of the garden, interrupted by an occasional daisy poking its head through their ranks.

Cautiously, she tiptoed forward, lest she tread upon some spell dropped on the garden floor by a scurrying elf. At any moment, she imagined, a woodland sprite might peep out from behind a cluster of cowslip. Or perhaps a tiny fairy would fly, struggling, into a spider’s dewy web.

Feeling as fey as her surroundings, Cynthia impulsively slipped the soft boots and woolen stockings from her feet and let her bare toes revel in the carpet of damp grass.

The past two days of impeccably good behavior and obligatory curtseys her father’s diplomatic visits always entailed suddenly seemed a small price to pay for this—the discovery of the long-lost Magical Garden of Castle de Ware.

She brushed her foot over a cluster of daisies, letting the delicate petals tickle her arch. Her giggle startled a sparrow from a willow branch. She took a deep breath, drinking in the scent of the flowers and herbs and trees as if it were an enchanter’s elixir.

Then she spied the roses.

A cascade of fat blossoms sprawled over the old stone wall. Some of the blooms were a deep, velvety red, some as smooth and white as fresh cream, and some the most delicate shade of pink she’d ever seen. A garland of them ran along the garden wall, spilling down in long tendrils like the jewel-studded hair of a princess.

She sighed in reverence, letting her gaze flit like a butterfly from flower to flower.

She wanted them. She
wanted
them.

Her mother’s garden at Castle le Wyte was so drab, so practical, comprised mostly of edible crops and herbs to heal the sick. How lovely it would be to have roses like that tumbling over the wattle fences. And, she thought slyly, how simple it would be to snip a few cuttings.

She frowned and gave her head a firm shake. One didn’t steal plants. Not from one’s host.

The bushes were well established. The wood at their bases was gnarled with years of survival. And Cynthia knew how to take cuttings of branches to make new plants without harming the old. Surely no one would miss a stem here and there.

She tucked her bottom lip between her teeth.

Nobody seemed to be around. Her father had gone riding with Lord James to tour the de Ware holdings. Lady Alyce was working in her solar on some tedious embroidery that she’d tried to convince Cynthia was fascinating. The two elder de Ware brothers were probably battling it out in the tiltyard by now, and the youngest had made himself as scarce as a bee in winter. Cynthia had been left to fend for herself. No one would find out.

Those roses were breathtaking. If she were very careful…

Pursing her lips in determination, she pulled the small eating dagger from her belt and crept stealthily forward.

Garth de Ware studied the young assassin sneaking up on the roses. He screwed up his forehead, annoyed.

He’d come to his favorite spot in the garden, the willow bower, to study his Latin. With his two older brothers sparring today—in the lists, in the great hall, in the courtyard, and anywhere else there was room to draw two blades—quiet was a precious commodity. Here, among the
flora
, he’d expected to review the intricacies of Latin conjugation in
pax
.

Then the garden gate creaked open at the hands of that skinny waif with orange hair—the le Wyte brat.

He glowered before he could temper his mutinous thoughts. Damn! The last thing he wanted was to be interrupted by a little girl who’d want him to take her hawking or riding or some such nonsense. He sat very still in his shade-dappled shelter, guarding his privacy like a grouse protecting her eggs, and watched as the small murderer violated the serenity of the garden and padded obliviously by his hiding place.

Actually, he had to concede, quirking up a reluctant corner of his mouth, he supposed the brat wasn’t all that bad. She’d come with her father two days ago, and in all that time, she’d never once asked him to entertain her. That, to a boy of fifteen summers, was an unexpected blessing.

If she’d been a few years older and a great deal comelier, his brothers would have leaped to do her bidding. A pretty young face often caused temporary madness and heated rivalry between the two of them.

This lass, however, couldn’t be much over ten years old, and she resembled the minstrels’ model of beauty about as much as a partridge resembled a falcon. A lady was supposed to be as pale as alabaster, fair-haired, demure, sweet, and delicate. Little Cynthia le Wyte was none of those. She was sturdy and freckled. Her hair was an outrageous shade of orange. With her bare feet, she looked like a poor peasant. And the way she gripped that dagger in her fist as she crept close was anything but delicate.

Still, there
was
some quality about her—something earthy, something honest—that made her, well, interesting.

She paused to smile then.

Her smile lit up her whole face, as if the sun shone for her alone, as if neither freckles nor orange hair could prevent her from expressing the sheer beauty of the moment and the radiance within her. And in that magical instant, Garth caught a glimpse of the woman she would become.

There was life in her eyes, vibrancy and mischief. Her smile was thoroughly engaging, as joyful and pure as a bubbling stream, and he mused on what it would be like to drink from that stream.

He was suddenly filled with wonder, the same wonder he felt when the odd little brown bulbs in his mother’s garden surprised him by miraculously blooming into rare and splendid flowers.

He settled back and watched in charmed amusement as the blossom slayer went to work. With her tongue anchored to the corner of her lip in concentration, she patiently sawed at the rose branches, carefully avoiding the thorns, and then tucked the foot-long pieces gingerly into her surcoat pockets. Once, the nearby chirp of a sparrow made her start in alarm and drop her dagger. And after that, from time to time, she’d look furtively over her shoulder. But she never noticed him sitting motionless beneath the bower.

Her stealth was pointless, of course. His mother wouldn’t have minded in the least. Lady Alyce gave often and willingly of her roses, which were known and prized far and wide. Had the little robber asked, his mother would have gladly loaded her pockets with cuttings.

The girl moved on to the deep red rosebush, the one who’s dropped petals always reminded Garth of spilled blood. Just then, as if she’d heard his thoughts, she pricked her finger on one of its nasty thorns. But the brave lass didn’t cry. She only winced, popping her stubby finger into her mouth to suck on the tiny wound.

Far Traveler by Rebecca Tingle
The Journey Prize Stories 27 by Various
Paris Pastry Club: A collection of cakes, tarts, pastries and other indulgent recipes by Zanotti, Fanny
One White Rose by Julie Garwood
Lord Of The Freeborn (Book 7) by Ron Collins
The Light of Burning Shadows by Evans, Chris
Damned if I Don't (The Harker Trilogy Book 2) by Hayes, Erin
The Islands of Dr. Thomas by Francoise Enguehard
The Blitz by Vince Cross
The Mile High Club by Rachel Kramer Bussel