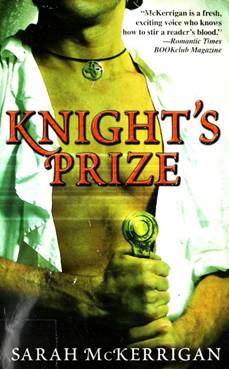 GENTLEWOMAN
BY
DAY,
OUTLAW BY NIGHT

She certainly
seems
meek and soft-spoken, unlike her warrior sisters. But once the sun goes
down, Miriel of Rivenloch becomes "The Shadow," the bold, mysterious renegade
who robs the rich to give to the poor. But can she outwit the devil-may-care
mercenary Sir Rand la Nuit, who has been hired to unmask The Shadow?
j

Miriel doesn't know
Rand
's mission—only
that his sudden, amorous courtship is hiding
something.
Rand
doesn't know who The Shadow is—only that the lovely woman in his arms
heats his blood. Touch by silky touch, kiss by sizzling kiss, the stakes—and
their, passions—mount. And once Rand and Miriel disrobe in his bedchamber, both
can lose everything they live for—including their oh-so-vulnerable hearts.

RAND
TURNED TO THE LOVELY LASS,
PERUSING HER SLOWLY FROM HEAD TO TOE.

"You look all grown up to
me."

"Do I?" Miriel asked
coyly.

"Oh, aye," he murmured
with a lazy grin. "You feel like a woman." He raised her hand and
rubbed it gently against his cheek. "And you definitely taste like a
woman." He lowered his gaze to her mouth, then dipped his head until his
breath caressed her jaw. "Even if you spy on people like a naughty
child."

He nipped at her lips once,
twice, then engaged her fully. Miriel eagerly responded, opening her mouth for
him, tilting her head, spreading her fingers across his chest. Encouraged by
her enthusiasm,
Rand
wrapped an arm around her
shoulders and pulled her closer...

The next thing he knew, the
earth was yanked out from under him, and he was laid out flat on his back.

In KNIGHT'S PRIZE (on sale now), the final chapter in my Warrior
Maids of Rivenloch trilogy,
Rand
la Nuit, infamous mercenary and expert
swordsman,
hunts the elusive outlaw known as
The
Shadow.
But who is the
mysterious, quick-
as
-lightning thief? And
what is sweet Miriel of Riven
loch
hiding from him?

The quest draws
Rand
closer
and
closer
to a
shocking truth—that the seemingly innocent
woman
he's
falling hopelessly in love with
knows
more than she's
letting on about The Shadow.

Writing KNIGHT'S PRIZE presented a fascinating challenge for
me—intertwining the cultures of East and West in a medieval setting. The
Silk Road
trade route was established at this time, so I
imagined that some martial arts might have been imported along with the silk.
Thus was born a very different type of damsel in shining armor—a medieval
heroine who kicks butt Chinese-style!

Why martial arts? As a kid, I always thought Kato
was way cooler than The Green Hornet. My guilty pleasure is
Jackie Chan movies, which I watch with

my teenage son. And I could watch that
beautifully choreographed foyer fight scene from
The Matrix Reloaded
a hundred
times.

The best thing about martial arts is that size doesn't matter. I
learned that as a pint-sized girl, studying judo. It's all about momentum,
strategy, grace, speed, agility, and surprise, using an attacker's own strength
against him. And as you can imagine, martial arts are also the great equalizer
of the sexes!

As a reader, I love surprises, so I've packed plenty of them into
KNIGHT'S PRIZE. No one is who they seem to be, twists and turns abound, and the
story has an explosive ending! The romance and adventure should keep you up
all night. Let me know if it did at
www.sarahmckerrigan.com
.

who shares with
me a love of swords,

the guilty
pleasure of action movies,

and who
convinced me that what romance novels

who kept my
chin up.

Miriel's
eyes widened, and she stumbled out of her last
taijiquan
posture.
She glanced anxiously about the chamber. "Who?"

She was
always on guard now. Since the Knights of Cameliard had insinuated themselves
into the household of
Rivenloch
Castle
, she never knew
when a Norman warrior might barge into her bedchamber.

"The
Night," Sung Li replied mysteriously, continuing with the measured
taijiquan
poses,
moving with a youthful grace that belied the wrinkled face and long snowy
braid, shifting slowly from left foot to right, then arcing like a bow being
drawn.

But
Miriel's tranquillity of a moment before was irreparably shattered. "
What
knight?"
she hissed.

Sung
Li spoke serenely. "The Night that comes to swallow The Shadow."

Miriel
scowled, her tense shoulders relaxing. So Sung Li was only being intentionally
obtuse again. The old servant's prophecies were usually accurate, but sometimes
Miriel's wise and wizened companion seemed impossibly inscrutable. And
inevitably chose the most unfortunate times to deliver the darkest omens.

Shivering
out her rattled nerves, Miriel resumed her exercises, shadowing Sung Li in
their daily ritual. Beyond and below the open shutters of the keep, the first
slender spears of sunlight pierced through the Scots woods.

But
now that Sung Li had cast a stone into her pool of calm, rippling her
meditative poise, Miriel's movements grew awkward.

What
did that mean—the night that comes to swallow the shadow? A cloudy evening? A
harsh winter? Another invasion by the English? Or could it mean something
more... personal?

Lost
in thought, Miriel wobbled and wavered and lost her balance, coming down hard
on one bare foot.

"Curse
it all!" She crossed her arms, blowing a stray tendril of dark hair out of
her eyes. "How can I concentrate when you deliver such ominous
tidings?"

Sung
Li broke from the pose long enough to turn an amused, smug look upon her.
"A true Master would not be distracted, not even by—"

"A
dragon breathing its fiery breath upon his head," Miriel finished in a
mutter. "I know. But you could have saved it for later."

Sung
Li finished the last extended movement, bowed respectfully toward the sun, then
faced Miriel with a solemn expression. "Later is too late. The Night is
coming
soon."

A
slip
of a
breeze
drifted through the window just then, bringing in the crisp October air. But
the preternatural chill that shuddered Miriel's bones had naught to do with the
season. Night was coming soon? 'Twas scarcely dawn.

Their
gazes met, and Miriel thought she'd never seen her
xiansheng,
her
teacher, look so grave. 'Twas as if those ancient black eyes bored into her
soul, seeking out her weaknesses, weighing her worth.

Sung
Li at last took hold of Miriel's forearm in a surprisingly firm grip.
"You must be strong. And brave. And clever."

Miriel
slowly nodded. She didn't always understand Sung Li, who spoke often in
riddles, but there was no question the warning was serious.

Then
Sung Li released her abruptly and, as if naught had happened, resumed the role
of Miriel's maidservant, donning a roughspun kirtle over the loose hemp
garments worn for
taijiquan,
pulling
on stockings and slippers, then selecting a deep azure surcoat for Miriel from
the great pine chest at the foot of the bed.

Miriel
frowned, slithering into the soft wool gown while Sung Li dutifully turned
away. They'd kept many secrets, the two of them, since the day five years ago,
when Miriel had deigned to purchase, along with
nunchakus
and
a pair of
sais
from
the Orient, a Chinese servant from a traveling merchant.