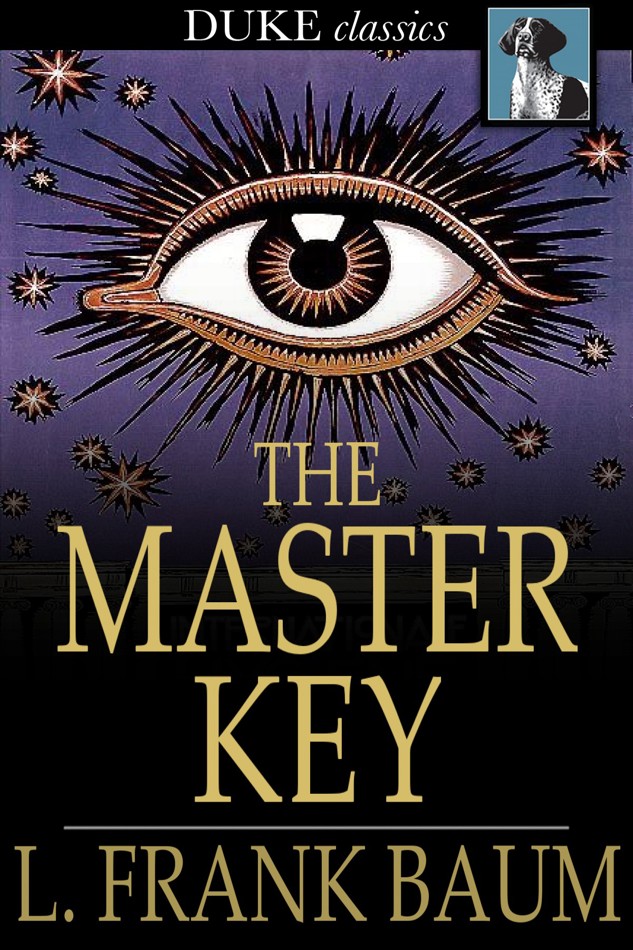 THE MASTER KEY
AN ELECTRICAL FAIRY TALE, FOUNDED UPON THE MYSTERIES OF ELECTRICITY
* * *
L. FRANK BAUM

*
The Master Key
An Electrical Fairy Tale, Founded Upon the Mysteries of Electricity
First published in 1901
ISBN 978-1-62011-972-3
Duke Classics
© 2012 Duke Classics and its licensors. All rights reserved.
While every effort has been used to ensure the accuracy and reliability of the information contained in this edition, Duke Classics does not assume liability or responsibility for any errors or omissions in this book. Duke Classics does not accept responsibility for loss suffered as a result of reliance upon the accuracy or currency of information contained in this book.
Contents
*
The Master Key
Who Knows?
1 - Rob's Workshop
2 - The Demon of Electricity
3 - The Three Gifts
4 - Testing the Instruments
5 - The Cannibal Island
6 - The Buccaneers
7 - The Demon Becomes Angry
8 - Rob Acquires New Powers
9 - The Second Journey
10 - How Rob Served a Mighty King
11 - The Man of Science
12 - How Rob Saved a Republic
13 - Rob Loses His Treasures
14 - Turk and Tatar
15 - A Battle with Monsters
16 - Shipwrecked Mariners
17 - The Coast of Oregon
18 - A Narrow Escape
19 - Rob Makes a Resolution
20 - The Unhappy Fate of the Demon
The Master Key
*

Founded Upon The Mysteries Of Electricity
And The Optimism Of Its Devotees. It Was
Written For Boys, But Others May Read It

These things are quite improbable, to be sure; but are they impossible?

Our big world rolls over as smoothly as it did centuries ago, without a
squeak to show it needs oiling after all these years of revolution.
But times change because men change, and because civilization, like
John Brown's soul, goes ever marching on.

The impossibilities of yesterday become the accepted facts of to-day.

Here is a fairy tale founded upon the wonders of electricity and
written for children of this generation. Yet when my readers shall
have become men and women my story may not seem to their children like
a fairy tale at all.

Perhaps one, perhaps two—perhaps several of the Demon's devices will
be, by that time, in popular use.

When Rob became interested in electricity his clear-headed father
considered the boy's fancy to be instructive as well as amusing; so he
heartily encouraged his son, and Rob never lacked batteries, motors or
supplies of any sort that his experiments might require.

He fitted up the little back room in the attic as his workshop, and
from thence a net-work of wires soon ran throughout the house. Not
only had every outside door its electric bell, but every window was
fitted with a burglar alarm; moreover no one could cross the threshold
of any interior room without registering the fact in Rob's workshop.
The gas was lighted by an electric fob; a chime, connected with an
erratic clock in the boy's room, woke the servants at all hours of the
night and caused the cook to give warning; a bell rang whenever the
postman dropped a letter into the box; there were bells, bells, bells
everywhere, ringing at the right time, the wrong time and all the time.
And there were telephones in the different rooms, too, through which
Rob could call up the different members of the family just when they
did not wish to be disturbed.

His mother and sisters soon came to vote the boy's scientific craze a
nuisance; but his father was delighted with these evidences of Rob's
skill as an electrician, and insisted that he be allowed perfect
freedom in carrying out his ideas.

"Electricity," said the old gentleman, sagely, "is destined to become
the motive power of the world. The future advance of civilization will
be along electrical lines. Our boy may become a great inventor and
astonish the world with his wonderful creations."

"And in the meantime," said the mother, despairingly, "we shall all be
electrocuted, or the house burned down by crossed wires, or we shall be
blown into eternity by an explosion of chemicals!"

"Nonsense!" ejaculated the proud father. "Rob's storage batteries are
not powerful enough to electrocute one or set the house on fire. Do
give the boy a chance, Belinda."

"And the pranks are so humiliating," continued the lady. "When the
minister called yesterday and rang the bell a big card appeared on the
front door on which was printed the words: 'Busy; Call Again.'
Fortunately Helen saw him and let him in, but when I reproved Robert
for the act he said he was just trying the sign to see if it would
work."

"Exactly! The boy is an inventor already. I shall have one of those
cards attached to the door of my private office at once. I tell you,
Belinda, our son will be a great man one of these days," said Mr.
Joslyn, walking up and down with pompous strides and almost bursting
with the pride he took in his young hopeful.

Mrs. Joslyn sighed. She knew remonstrance was useless so long as her
husband encouraged the boy, and that she would be wise to bear her
cross with fortitude.

Rob also knew his mother's protests would be of no avail; so he
continued to revel in electrical processes of all sorts, using the
house as an experimental station to test the powers of his productions.

It was in his own room, however,—his "workshop"—that he especially
delighted. For not only was it the center of all his numerous "lines"
throughout the house, but he had rigged up therein a wonderful array of
devices for his own amusement. A trolley-car moved around a circular
track and stopped regularly at all stations; an engine and train of
cars moved jerkily up and down a steep grade and through a tunnel; a
windmill was busily pumping water from the dishpan into the copper
skillet; a sawmill was in full operation and a host of mechanical
blacksmiths, scissors-grinders, carpenters, wood-choppers and millers
were connected with a motor which kept them working away at their
trades in awkward but persevering fashion.

The room was crossed and recrossed with wires. They crept up the
walls, lined the floor, made a grille of the ceiling and would catch an
unwary visitor under the chin or above the ankle just when he least
expected it. Yet visitors were forbidden in so crowded a room, and
even his father declined to go farther than the doorway. As for Rob,
he thought he knew all about the wires, and what each one was for; but
they puzzled even him, at times, and he was often perplexed to know how
to utilize them all.

One day when he had locked himself in to avoid interruption while he
planned the electrical illumination of a gorgeous pasteboard palace, he
really became confused over the network of wires. He had a
"switchboard," to be sure, where he could make and break connections as
he chose; but the wires had somehow become mixed, and he could not tell
what combinations to use to throw the power on to his miniature
electric lights.

So he experimented in a rather haphazard fashion, connecting this and
that wire blindly and by guesswork, in the hope that he would strike
the right combination. Then he thought the combination might be right
and there was a lack of power; so he added other lines of wire to his
connections, and still others, until he had employed almost every wire
in the room.

Yet it would not work; and after pausing a moment to try to think what
was wrong he went at it again, putting this and that line into
connection, adding another here and another there, until suddenly, as
he made a last change, a quick flash of light almost blinded him, and
the switch-board crackled ominously, as if struggling to carry a
powerful current.

Rob covered his face at the flash, but finding himself unhurt he took
away his hands and with blinking eyes attempted to look at a wonderful
radiance which seemed to fill the room, making it many times brighter
than the brightest day.

Although at first completely dazzled, he peered before him until he
discovered that the light was concentrated near one spot, from which
all the glorious rays seemed to scintillate.

He closed his eyes a moment to rest them; then re-opening them and
shading them somewhat with his hands, he made out the form of a curious
Being standing with majesty and composure in the center of the
magnificent radiance and looking down upon him!

2 - The Demon of Electricity
*

Rob was a courageous boy, but a thrill of fear passed over him in spite
of his bravest endeavor as he gazed upon the wondrous apparition that
confronted him. For several moments he sat as if turned to stone, so
motionless was he; but his eyes were nevertheless fastened upon the
Being and devouring every detail of his appearance.

And how strange an appearance he presented!

His jacket was a wavering mass of white light, edged with braid of red
flames that shot little tongues in all directions. The buttons blazed
in golden fire. His trousers had a bluish, incandescent color, with
glowing stripes of crimson braid. His vest was gorgeous with all the
colors of the rainbow blended into a flashing, resplendent mass. In
feature he was most majestic, and his eyes held the soft but
penetrating brilliance of electric lights.

It was hard to meet the gaze of those searching eyes, but Rob did it,
and at once the splendid apparition bowed and said in a low, clear
voice:

"I know that," answered the boy, trembling, "but WHY are you here?"

"Because you have touched the Master Key of Electricity, and I must
obey the laws of nature that compel me to respond to your summons."

"I understand that. You did it unconsciously. No one in the world has
ever done it before, for Nature has hitherto kept the secret safe
locked within her bosom."

Rob took time to wonder at this statement.

"Then who are you?" he inquired, at length.

"The Demon of Electricity," was the solemn answer.

"Certainly. I am, in truth, the Slave of the Master Key, and am forced
to obey the commands of any one who is wise and brave enough—or, as in
your own case, fortunate and fool-hardy enough—to touch it."

"I—I've never guessed there was such a thing as a Master Key, or—or a
Demon of Electricity, and—and I'm awfully sorry I—I called you up!"
stammered the boy, abashed by the imposing appearance of his companion.

The Demon actually smiled at this speech,—a smile that was almost
reassuring.

"I am not sorry," he said, in kindlier tone, "for it is not much
pleasure waiting century after century for some one to command my
services. I have often thought my existence uncalled for, since you
Earth people are so stupid and ignorant that you seem unlikely ever to
master the secret of electrical power."

"Oh, we have some great masters among us!" cried Rob, rather nettled at
this statement. "Now, there's Edison—"

"Edison!" exclaimed the Demon, with a faint sneer; "what does he know?"

"You are wrong to call them wonderful," replied the Demon, lightly.
"He really knows little more than yourself about the laws that control
electricity. His inventions are trifling things in comparison with the
really wonderful results to be obtained by one who would actually know
how to direct the electric powers instead of groping blindly after
insignificant effects. Why, I've stood for months by Edison's elbow,
hoping and longing for him to touch the Master Key; but I can see
plainly he will never accomplish it."