Lacuna: The Ashes of Humanity 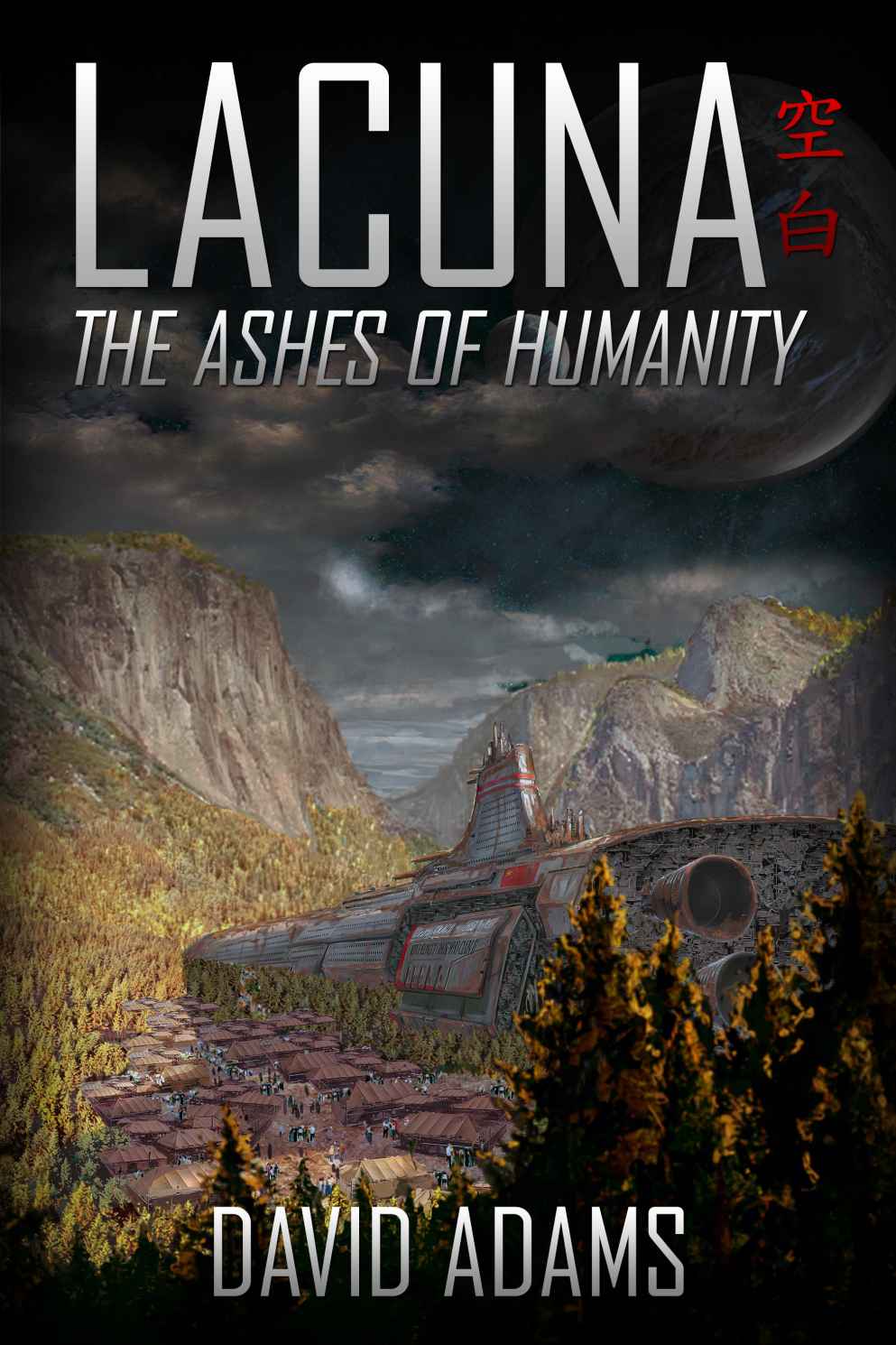 who allowed me to become who I am,

to all my friends,

for loving me in spite of me,

and to my readers,

you made all of this possible.

Special thanks to UFOP: Starbase 118 for teaching me how to write,

and to Shane Michael Murray,

my tireless proofreader, motivator and partner in crime.

Shane has recently published his first novel,
The Orc of Many Questions
, and I loved it. I recommend Orcs to any readers of intelligent, thought provoking,
engrossing
fantasy.

The Ashes of Humanity

People who fight fire with fire usually end up with ashes.

She had an implant until recently and it had meant she could see shapes. No colours yet, but it was being upgraded to enable that function. Double the resolution as well, but it left her sightless for a month. That suited her fine. She didn't need to see on her honeymoon; this was a time about feelings, not sights, so she was content.

Not seeing this sunrise was a small sacrifice. Instead, she would experience it the way blind people always had.

She sat in the dark, waiting for the first fingers of dawn's light to touch her. She had done this before and knew what was coming. The warmth would travel up her body, and she would welcome it into the world. She hadn't always been sightless; she knew what colours were and what the sun looked like. Her vivid imagination would paint this picture in her mind, reconstructed from all the sunrises she'd ever seen, changing it to reflect her current situation. She would listen as the baby, Commander Liao's baby, gurgled and laughed, enjoying the sights she couldn't see.

This time, though, a faint rumbling followed by the distant sound of a foghorn caused her to frown. They were out in the middle of nowhere, certainly a long way away from any rivers, and fog was a rarity in the scorching northern Australian heat. It was just the three of them. The baby fell silent, clutching to her fearfully.

Feet pounded on the ground nearby. She turned her head to the sound. "Mike?"

"Penny!" Mike's ragged breathing, growing closer. "Penny, we have to go. We have to go
now
."

Their fortnight alone had just begun, but Penny was enjoying it so far. This was a marked departure from their honeymoon so far.

"What's happening?" she said, standing and reaching for him with her free arm, holding the infant close with the other.

Strong arms wrapped around her middle, but they didn't stay there. He led her, walking her along the grass at a pace she could barely handle. "Penny," said Mike, "it's the Toralii. They're in orbit, and they're firing on the surface."

She almost stumbled at hearing that and gripped the baby so hard it whimpered. She felt the chill that the name inspired. Demons, the Toralii were. Alien angels of darkness who bombed their cities from orbit. Visitors from the void between the stars. They had already attacked Sydney, Tehran and Beijing, and most of the world lived in fear of their return. "They're here? What are they shooting at?"

Penny relied on Mike, a military pilot who went by the call sign "Magnet", to have all the answers, but this time there was something different in his tone. Something she'd never heard before that frightened her. Terror.

"W—What?" She fought for words, stumbling again. "What do we do?"

The foghorn faded out, then returned, much closer. It was not a distant sound carried on the wind; it was a roar, a terrifying blast of noise coming in from somewhere uncomfortably close. A wave of pressure blew her off her feet. The baby screamed as they fell into the dirt.

Disorientated, dizzy, she searched with her fingers, following the sound of the baby's cries, but then she was being lifted off the ground. "Sorry," said Mike, breathing in her ear. "Here's the baby. Hold her, we have to move." He pressed the wriggling, screaming form into her arms. She cradled it protectively with one arm as Mike ran, her other hand grabbing hold of her husband. She hated being carried, metaphorically or literally, but this was no time for pride.

The whine of a reactionless drive, growing in volume, reached her ears. Soon it overwhelmed the baby's screaming. The sound was a Falcon, the unarmed shuttle variant of the Broadsword bombers. Mike had "borrowed" it for their honeymoon. Technically, it was supposed to be used to ferry officers from parties and other events on shore leave, but Mike's marriage—thought long overdue by his squadron—had meant that nobody said a word when he took it.

Soon steel and metal replaced the crunch of Mike's shoes over dirt and grass. The temperature rose as the warm air from the ship's interior, heated by a day in the sun, drifted out of the loading ramp. Mike put her down. She found her footing unsteadily, clutching Liao's baby close, reaching out for something to hold. She searched out, grasping until she brushed a bulkhead.

"I have to launch the ship," said Mike, "we don't have much time. Can you make it to the cockpit?"

"Yes, I can." She pulled up a mental map in her head. First the cold steel of the ladder, then the smooth plastic of the hatchway. The tight, cramped passage to the cockpit. Make sure the door was open. One hand on the baby, one hand on the railing. Follow it around to the left, and she would be there.

"Okay." His lips met hers, kissing her quickly, and then he was gone. That was when she knew the situation must truly be bad. Mike was always there for her in times of distress.

"Ready to go, sweetheart?" she cooed to the baby, but another shockwave washed over the ship. It rocked and swayed, and she tumbled into the bulkhead. The deck underneath her tilted, and she feared that it would tip over, but the floor levelled itself with a low groan.

She walked forward, sliding her hand along the bulkhead, over a fire extinguisher and a piping conduit and something else she couldn't identify, then settled on the round steel of the ladder. She put her foot on the lowest rung, but then the ship began to lift.

The liftoff speed was enormous, the pressure increasing her weight threefold. The last time they had taken off was in calm weather, and there had been almost no discernible pressure at all. This time it felt as though her entire body had been transformed into iron.

Moving was impossible. All she could do was hold the child, whose underdeveloped lungs could no longer scream against the pull of enhanced gravity. Fearing she would drop her, Penny slid down and laid her out on the metal deck, the rumbling and shaking of the ship lifting off at emergency speed all around her. It persisted for almost a minute, and panic rose in her chest. The force soon abated, and the child's cries returned in full force.

The cries reassured her. Told her the child was okay.

"There, there," she said, trying to soothe it. "We just had to fly into space, that's all." A faint tremor ran through the ship as it climbed. Penny scooped up the infant and stumbled her way towards the cockpit. It was difficult with the ship rocking back and forth like a sailing ship of old.

It took her longer than usual to arrive. Her fear, her uncertainty, stole her confidence, made every step an awkward shuffle. But soon she was gingerly stepping through the threshold between cramped passage and cockpit.

"Are we in orbit?" She reached for the back of the co-pilot's seat and found the headrest. She slid into her seat and strapped in. The baby relaxed into her arms.

"Yeah," said Mike. His voice sounded odd. Distant. "We made it."

"I see at least one Toralii ship. Visually. The ship's radar's lit up with them. They're not paying any attention to us, though. They're firing down onto the planet. There's dust kicked up everywhere. Huge bloody clouds of it, like a big brown blanket covering everything. The oceans are a strange red, reflecting off all the stuff thrown up in the atmosphere. There are lights. Little pockets of light scattered around. Remember when I told you about Earth by night?"

"It looks like that, except every light a hundred times brighter." His voice trailed off, becoming softer. "They're fires. Fires the size of Sydney. I can see the columns of smoke rising up from them. The dust is getting thicker, blocking out the lights now. The flames move in lines. Must be a hundred kilometres long or more, like a wall moving over the continent. Indonesia's the same, and the other parts of Southeast Asia. Japan too, Korea, China... everywhere. That's all I can see right now, but I don't think the rest of the world is doing any better."

A wall of fire visible from low orbit. Incredible. "Not many people are going to survive," Penny said, "not if things are like that." She grasped for his hand, taking it and holding it firmly. "What are we going to do?"

"Rendezvous with the
Rubens
, if she's out there. Find out what the fuck just happened."

She flinched slightly, turning her attention to the baby and saying nothing.

"It's understandable, given what's happened." She touched the baby's cheek, testing her temperature. Warm but calm. It was happy now, in space. The baby's head was turned towards the stars, looking out.

"Will you pray with me?" Penny asked. Mike did not usually pray, was not religious, although he had been trying. Trying for her.

One could not change what one believed. The effort, though, made her feel good.

She couldn't help but smile despite it all. Her favourite.

Her hand squeezed his, as though to bring him closer. If he needed it to control the spaceship, then she would understand, but everything seemed so quiet and peaceful now. Danger seemed so far away.

"He maketh me to lie down in green pastures: He leadeth me beside the still waters.

He restoreth my soul: He leadeth me in the paths of righteousness for His name's sake.

Yea, though I walk through the valley of the shadow of death, I will fear no evil: For thou art with me; Thy rod and thy staff, they comfort me. Thou preparest a table before me in the presence of mine enemies; Thou anointest my head with oil; My cup runneth over. Surely goodness and mercy shall follow me all the days of my life, and I will dwell in the House of the Lord forever."

She basked in the silence as the prayer ended. The baby squealed and gurgled happily.

Penny stroked the infant's head, holding it to her chest. "It didn't work. I'm still afraid."

Her voice cracked. "What's going to happen to us, Mike? Where will we go?"

"The Pillars of the Earth are out there, the
Sydney
, the
Tehran
, and the
Beijing
. The
Washington
and the
Madrid
are in orbit. They have jump drives, too. They might have escaped. And, of course, there's the
Rubens.
"