Lady Justice and the Candidate 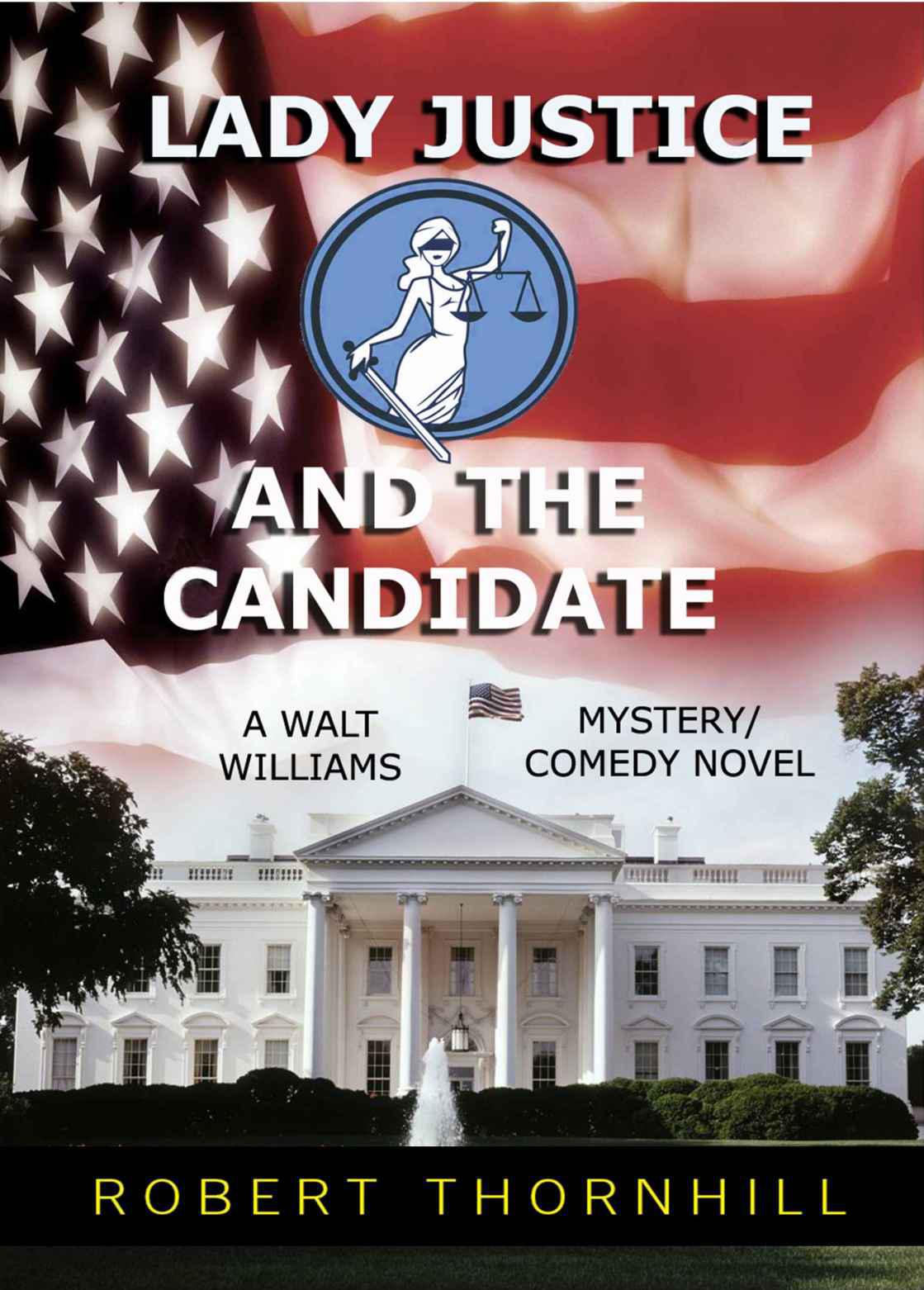 In the eighth installment of the Lady Justice series, we find another controversial subject --- politics!

Walt Williams is called on a top-secret special mission to protect an independent candidate for the presidency, Benjamin Franklin Foster, but Ben is not your average politician.

His radical departure from the 'politics as usual' position of the major party candidates has made him a target of powerful special interests.

Walt embarks on one of his most dangerous and rewarding missions.

All the lovable characters are back and Walt finds that his decisions deeply affect his friends and family.

A fantastic read and the timing could not be more perfect with the upcoming presidential election.

I was left to wonder, what if...just what if a candidate like the fictional Ben Foster were to run for president.
A must read.

Once again Robert Thornhill has created another thought provoking hit!

Bringing us into the future --

We want a “Champion for Change” and Benjamin Franklin Foster is the future that everyone dreams about, putting the right foot forward in today’s political world.

Did you wonder if there would ever be a perfect candidate to run our great nation?  It always appears we have settle for the ‘lesser of two evils’ when we cast our votes.

Robert Thornhill, the author of the
Lady Justice
series, delivers the goods in his next book titled “
Lady Justice and the Candidate
” which is a must read!

If you want to see a new candidate that is willing to take on big business, the FDA, even the oil industry plus the IRS, then you will not be disappointed in this book.  It grabs you from the start and keeps you turning the pages.

The characters are defined throughout the story and the author does a great job defining their roles.  You feel like you are standing right beside Walt all the way.

Robert Thornhill provides all the elements to enjoy when you pick up one of his books in the
Lady Justice Mystery/Comedy
series.  You get to enjoy the mystery, excitement, humor and suspense as he draws you into the plot.

In this one, you’ll fight for the underdog and be amazed at the lengths taken to try and stop him.  After all it’s only money, power and greed at its finest hour.

I found myself wanting something sweet too, whenever the candidate ordered his desserts.

I thoroughly enjoyed this story and know you will too.

Lady Justice and the Candidate

No part of this publication may be reproduced, stored in a retrieval system or transmitted in any way, by any means, electronic, mechanical, photocopy, recording or otherwise without prior permission of the author except as provided by USA copyright law.

The political views expressed herein may or may not be those of the author and are presented to stimulate thought.

The author of this book does not dispense medical advice or prescribe the use of any technique as a form of treatment for physical, emotional or medical problems without the advice of a physician, either directly or indirectly. The intent of the author is only to offer information of a general nature to help you in your quest for emotional and spiritual well being. In the event you use any of the information in this book for yourself, which is your constitutional right, the author and publisher assume no responsibility for your actions.

LADY JUSTICE AND THE CANDIDATE

The Drug Enforcement Unit of the Kansas City Police Department had been monitoring the activities of the Mexican drug cartel for months.

With over forty billion dollars of heroin, marijuana and methamphetamines coming across the border, Mexico had long been the biggest source of illegal drugs being smuggled into the U.S.

Mexican cartels controlled large swaths of Mexican territory and dozens of municipalities, and their primary corridor had been the vast border separating Mexico from California, Arizona, New Mexico and Texas.

The President of the United States in cooperation with Mexican President, Felipe Calderon, initiated the 'war on drugs.'

The U.S. pledged $1.4 billion and Calderon had amassed an army of 45,000 troops to stem the tide of illegal drugs crossing the border.

The cartels, feeling the increased pressure, sought another route to deliver their product to the lucrative U.S. cities --- by water.

Launching from Mexico's gulf coast, boats filled with drugs entered the U.S. via the Mississippi River in New Orleans and made their way up the 1,278 mile waterway, offloading their cargo along the way.

From St. Louis, the boats entered the Missouri River, bringing their illegal contraband into the heart of the Midwest.

Since both rivers wound through hundreds of miles of uninhabited farmland and forest, there was ample opportunity for the smugglers to meet their urban contacts unobserved.

The Drug Enforcement Unit had been tipped off by a fisherman who had observed such a meet while setting jug lines for the big channel cat and flatheads that inhabited the Big Muddy.

Increased surveillance along the river had netted the DEU a local trafficker with ties to the Kansas City arm of the cartel.

The officers had let the exchange take place and when the smuggler's boat had disappeared, they collared the drug mule on the shoreline.

The mule, who was simply a runner for the K.C. Cartel, found himself between a rock and a hard place.

The DEU had him in possession of enough illegal drugs to put him away for a very long time and his life wouldn't be worth a duck's fart in prison after losing a valuable shipment of the cartel's drugs.

It didn't take much persuasion for the mule to agree to be a snitch in exchange for the Witness Protection Program.

With information supplied by the mule-turned-snitch, the DEU learned of a huge shipment coming to Kansas City.

This was the break that they had been looking for --- in one fell swoop they could take down both the Mexican smuggler and their Kansas City connection and keep a huge supply of narcotics off the city streets.

This was a huge operation for Sergeant Rocky Winkler and the Drug Enforcement Unit.

A dozen officers from the Midtown Patrol had joined the men normally under his command.

Captain Duane Short had handpicked his best officers and together, they would make one of the biggest drug busts in Kansas City history.

The team sat quietly awaiting their orders from Sergeant Winkler.

"There has never been and most likely never will be another operation like the one we will be conducting today.

“The smugglers will be loading their illegal cargo onto one of the big sand barges somewhere down river.

"The drugs will be buried under tons of sand --- if we didn't have the intel from our snitch, it would just look like another barge loaded with sand dredged from the river.

"The barge will dock by one of the ports at the confluence of the Kaw and Missouri Rivers. Bulldozers will off load the sand containing the drugs to waiting dump trucks.

"Once the barge is secured to the dock and the first dozer starts to unload, we'll hit them."

One of the senior members of the DEU spoke, "Do we have any idea how many men we'll be facing?"

"Our best estimate is fourteen. There will be four men on the barge, four dump trucks with a driver and a wingman and probably two high-ranking members of the cartel overseeing the operation.

"A word of caution --- Mexican cartels employ hit men known as 'sicarios' and the U.S. Drug Enforcement Administration reports that these men are far more sophisticated and dangerous than any other organized criminal group in U.S. law enforcement history.

"They use grenade launchers, automatic weapons, body armor, and sometimes Kevlar helmets. Some groups have also been known to use IED's, improvised explosive devices.

"We'll have our hands full so be careful out there!"

The members of the task force watched from their assigned positions as the tugboat pushed the huge barge loaded with sand against the current of the Missouri River.

Skillfully, the tug captain maneuvered the barge against the dock where it was secured by ropes as thick as a man's forearm.

The diesel engines of the big dozers came to life and black smoke billowed into the air and was carried down river by the gentle breeze.

Officers, dressed as dockhands, had been stationed on barges on either side of the Cartel’s barge and the remainder of the DEU team waited in armored troop carriers supplied by the National Guard.

The first dozer rumbled onto the barge and buried its scoop deep into the sand.

The moment had come.

Sergeant Winkler barked into his mike, "That's it! Let's go!"

Six armored troop carriers and four cruisers with lights and sirens blaring converged on the dock initiating a scenario that might have been mistaken for a firefight in the streets of Baghdad in Iraq.

Automatic weapons erupted from both sides and bullets splattered against the troop carriers and the dump trucks.

Above the report of the assault rifles, orders from the Sergeant and the cries of the wounded could be heard.

A figure had emerged from behind one of the dump trucks and was aiming the launcher at one of the troop carriers.

Before he could fire, a shot was heard from the barge on the east side. The man holding the grenade launcher fell to the ground.

It was quickly picked up by another cartel sicario who turned his attention to the officer on the barge that had killed his comrade.

Surrounded by the swirling waters of the Missouri, the officer had nowhere to escape and he watched helplessly as the grenade was pointed in his direction.

The members of the task force watched in horror as the barge exploded and debris from the blast was carried away by the swift current.

Spurred on by the death of their fellow officer, the task force mounted an all-out assault, and the firefight was soon over.

The next morning, the article in the
Kansas City Star
read:

"Mexican Drug Cartel Taken Down By The DEU.

In a battle not seen in the streets of Kansas City since the battle of Union Station in 1933, a task force led by the Kansas City Police Department Drug Enforcement Unit captured senior members of the Mexican Drug cartel and seized a shipment of drugs with an estimated street value of over three million dollars.

Sergeant Winkler declared the operation, which had been months in the planning, a huge success.

The thrill of this victory was marred by the loss of a member of the task force.

Officer Walter Williams, who was credited with saving the lives of members of the task force, was killed in the line of duty.

Officer Williams, 69, was the first member of the department’s City Retiree Action Patrol and had twice been decorated with the Medal of Valor.”

The Dawn of Innovation by Charles R. Morris
Landon (The Love Family Series Book 5) by KATE ALLENTON
The Earl and His Virgin Countess by Dominique Eastwick
Crossing the Line Part One (A Novella) by Samantha Long
Assignment Moon Girl by Edward S. Aarons
Discovering Alicia by Tessie Bradford
Redemption by Rebecca King
Lost Everything by Brian Francis Slattery
The Priest by Gerard O'Donovan
Veiled Threats by Deborah Donnelly