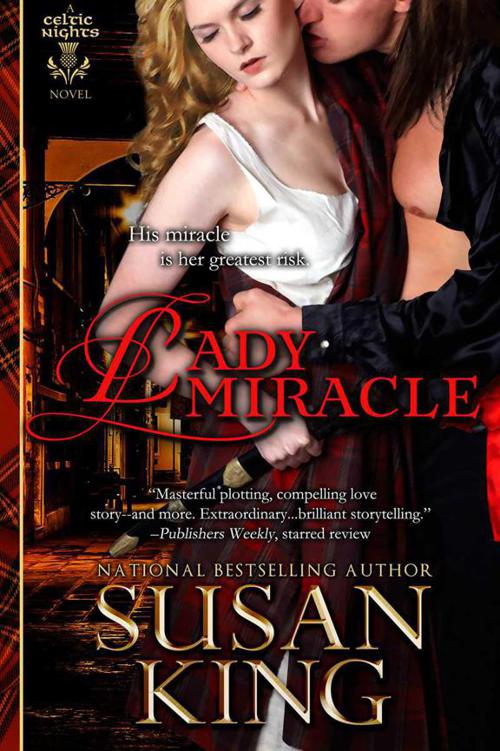 “King is a master storyteller who spins tales of love sprinkled liberally with history, the mystical and exciting adventures much to this reader’s delight and utter enjoyment.”

for our own little selkie

Lady Miracle
is a work of fiction. Names, characters, places and incidences are the products of the author’s imagination or are used fictitiously. Any resemblance to actual events, locales, persons, living or dead is entirely coincidental. The Publisher does not have any control over and does not assume responsibility for author or third-party websites or their content.

First published in the US by Penguin Group 1997

QED stands for Quality, Excellence and Design. The QED seal of approval shown here verifies that this eBook has passed a rigorous quality assurance process and will render well in most eBook reading platforms.

A Letter to the Readers

She walked among the wounded like sunlight gliding through shadow. Mists over the field obscured the bodies of those who had fallen in that morning’s battle, but Diarmid Campbell saw the young girl clearly. He watched her, his fingers still as they gripped the scalpel, his attention captured for an instant.

Her pale gown and golden braids shimmered in the light as she moved through mist and mud. She looked ethereal and graceful as she bent toward a wounded man and touched his brow.

She was like an angel come to find the dying souls, Diarmid thought, and shook his head to clear his battle-weary mind. No blessed vision on this cursed field, he thought; just a fair, slight young girl carrying a basin of water and some bandaging cloths. She must have come with the local women to help in the aftermath of the battle between English and Scots.

Diarmid wiped the back of his hand, red with other men’s blood and his own, over his sweaty brow. He bent again to examine an arrow wound in a Highlander’s shoulder.

The man grimaced. “A beardless lad doing the work of healing women?” he asked in Gaelic. “I saw you fight, lad. That you clearly can do, and your brother with you. But this—?”

“I have not yet reached my majority,” Diarmid said, “but I did study with the infirmarian at Mullinch Priory. I have repaired hundreds of wounds more serious than yours.”

“Then do the work and be quick about it.”

Diarmid grasped the wooden shaft, took a breath, and swiftly yanked out the embedded iron tip. As the man gasped, Diarmid drenched the fresh wound with wine from a flask. Then he readied a silk thread and a needle of gold, cleansed them and his fingers in a trickle of wine, and stitched the flesh together. Wrapping the shoulder with linen strips torn from the man’s shirt, he looked up.

“Change the bandage often and pour wine or
uisge-beatha
over it when you can,” he said. “And pour yourself a dram now and then, too.” The Highlander nodded his thanks.

Diarmid stood, swiping again at blood that seeped from a cut over his left eye. He would ask Fionn to stitch it closed for him, though his brother had no gentle hand. For now, he must ignore that, and the aching gash on his left forearm, his own injuries received in the battle.

He ignored, too, the fear that he did not know enough about treating wounds, the fear that he could cause worse, even death, through error or ignorance. He walked across the field, resisting the fatigue that dragged his steps.

He had not treated hundreds of battle wounds, although he had told the Highlander so to reassure him. He had learned herbal lore and the ways of the body in illness and injury from a capable infirmarian. But Brother Colum had had scant experience with battle wounds, and had died before Diarmid had absorbed all that he wanted to know about healing and the body.

Most of what he had learned since had been gleaned through experience in grim circumstances outside the peaceful monastery. Over the past year while fighting beside fellow Highlanders for King Robert Bruce, Diarmid had routinely helped the wounded. Despite his youth, he now had a reputation as a capable surgeon. Necessity was a demanding teacher.

Today, his skills were in demand. An English patrol had routed the small band of Highlanders, including Diarmid, leaving many Scots injured or dead on the damp ground. Some were Diarmid’s own Campbell kin. He and his brother Fionn, thank the Lord, had been spared.

He had done his best to help, but he could not save every wounded man there. A quick hand, a keen eye, a little training were not enough against the power of death. He pushed a hand through his tangled brown hair in mute frustration.

Ahead, he saw the young girl again. She glowed like pale sunshine in the mist, a fragile thing, too innocent and pure to be in this sad, bloody place. As he watched, some of the wounded men called to her or stared as if she were a saint come down from heaven.

Diarmid had no such illusions. The monks of Mullinch had believed in miracles, but they had been sheltered men. At nineteen, Diarmid knew the harshness of the temporal world. He had been educated by monks, but his father had trained him to be a warrior and a landowner. He had witnessed death and devastating injury and had dealt them himself. Wielding a broadsword was as easy for him as using a scalpel.

Just now he wanted to use neither. He thought of Dunsheen Castle in the western Highlands, proud on its green isle surrounded by water and mountains. His new role as laird there was challenge enough. His kin, tenants, herds, his late father’s trade business all needed his attention now. He dreamed of being at Dunsheen, and he longed to sail a sleek galley ship on trading voyages, too. But those things would have to wait while this war raged.

Others moved through the fog too, including Scotsmen, and a few women who had come with a priest to offer help. A wounded man’s cry echoed, chilling his soul.

The young blond girl knelt in the mud and leaned forward to cleanse a man’s arm. She had a serene, assured way, as if the rawness of it all did not frighten her. Diarmid stopped to watch.

“If angels exist, they look like her,” a voice murmured behind him.

Fionn Campbell nodded, his profile handsome, framed by brown hair. Diarmid knew, from images in streams and polished steel, that he and his younger brother resembled each other.

“We have no time to contemplate,” Fionn said. “Come look at Angus MacArthur. His leg wound is bleeding heavily.”

Diarmid followed his brother to kneel in the grass beside Angus, their father’s cousin. The older man groaned as Diarmid examined a deep wound in the thigh, made from the wide sweep of a broadsword. Angus had been his father’s
gille-ruith
, his runner; the man’s legs were strong as iron. But the blade had bitten deeply into tight muscle, nearly cleaving the bone.

Frowning, Diarmid wadded the cloth that Fionn handed him and pressed it against the gushing wound. When he saw little improvement, he glanced at Fionn.

“Steady his leg,” he directed. “If an artery is torn, we must attempt to repair it.”

Fionn supported the thigh while Diarmid probed gently in the wound. “Soon you should tend to your own wounds,” he told Diarmid. “The gash in your arm is bleeding through the bandage, and that cut over your eye has opened again.”

“Later you can sew them both shut for me.”

“You risk your life twice in one day, then. Ask that small angel to tend them for you.”

Diarmid huffed a flat, humorless laugh and worked silently. Angus Campbell passed out with a heavy sigh, and though that made Diarmid’s work easier, it increased his concern.

“I wonder who she is,” Fionn said, looking across the field. “She has a sweet way. I will need a wife soon. A fair one who could tend to my battle wounds would be a blessing.”

Diarmid concentrated on applying pressure, but the folded cloth grew red far too quickly. “I need a strip of linen and some help pressing on the wound, quickly!”

Fionn tore a piece from the hem of his own shirt and handed it to Diarmid, who wrapped the cloth high on Angus’ leg, twisting it and holding it tight. “If I cannot stop the flow—” he stopped. The outcome was obvious. “Brother Colum did not teach me enough before he died.” He loosened the bandage, tightened it again. “Pressure will do, and a tight band. Some herbs ease bleeding, but I have no simples or potions here. I should have brought some herbs with me.”

“We did not know that an English patrol would attack us out here. We thought it was safe enough in this part of Galloway. But there is no trusting the English. Will the blood band work?”

“I will make it work,” Diarmid said fiercely. After a moment, he nodded. “It seems to be slowing, thank God.” He lifted the wineskin that hung at his belt, pulled the wax stopper free, and trickled wine over the wound. “Hold the leg,” he told Fionn.

He readied the needle with more silk and dribbled wine over it, and began to pull together the deepest layer of muscle. Blood pooled freely, making it difficult to see what needed repair. Leaning over his patient, he did not notice that a slight figure knelt beside Fionn. When he glanced up, he saw the girl.

“Be gone,” he told her curtly.

“Let me help.” Her voice was light and young, and she spoke in Gaelic, as he did. A mix of voices floated over the field: Gaelic, English, French, the priest’s Latin. He understood them all.

“You can do nothing here,” he said. He drew the needle in and out, in and out. Then he swore softly as the silk slid from the needle and the bleeding worsened. He would have to find the opening in the artery or Angus would die. He rethreaded the needle and instructed Fionn to loosen and tighten the blood band.

The girl leaned forward and laid her slender hands over the gaping, ugly slash. She drew in a deep breath.

“Hush. Give me a moment.” A firm, quiet command. Small and slight beside them, she spoke like a queen. Eyes closed, back straight, she lifted her delicate golden head to the dreary, misted light.

She looked like a shining sword, beautifully shaped, hilted in gold and bladed in silver. Flawless, strong, an angel come to earth. Diarmid stared in astonishment.

Then he recovered his wits. Angus’s wound required urgency, not awestruck dreaming. He reached out to lift the girl’s hand away. But he let his hand hover.

Heat radiated from her fingers. She seemed to be praying in a meditative trance, eyes closed, hands cupped over the wound. Her fingertips were staining deep red.