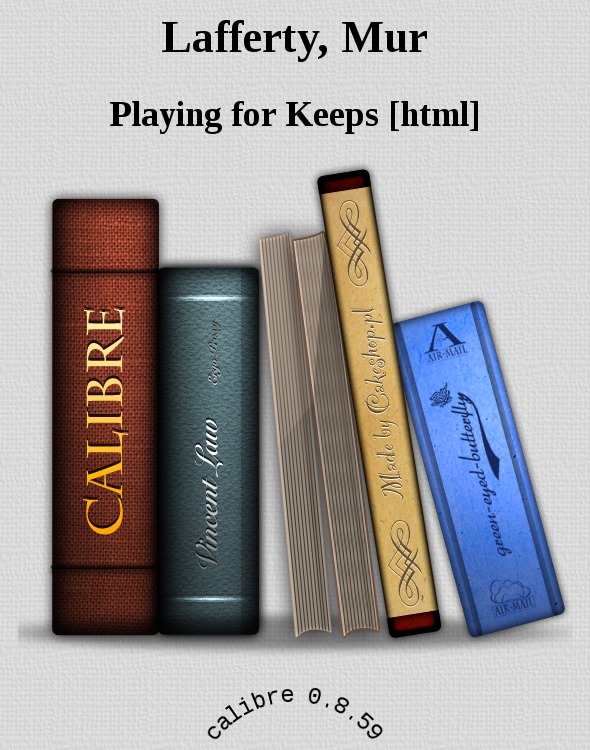 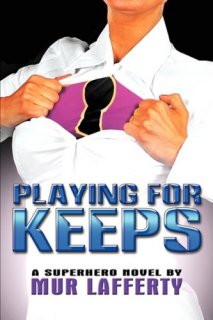 By Mur Lafferty For more information about this novel, art, and the audio version to listen to on your MP3 device or computer, please visit www.playingforkeepsnovel.com.
If you have enjoyed this free book, you will be pleased to know it's coming out in print on August 25 from Swarm Press! Please consider buying it from Amazon.com on August 25, 2008 - the more people we get buying the book on that day, the more attention the book will get! Thanks for your support!
Copyright 2007, some rights reserved. Creative Commons Attribution-Noncommercial-No Derivative Works 3.0 United States License.
Please distribute this PDF to anyone you think will enjoy it!
Chapter 1

The super-villain attacked at the most inconvenient place and time: right on Keepsie’s walk to work. She looked into the sky at the costumed combatants and groaned.
“Why did they have to do this on a Thursday?”
Crowds gathered on the sidewalk to stare up at the battle, clearly ignorant of the danger. Not to mention ignorant that they were making her later.
“Oh my God, it’s White Lightning!” screamed a woman directly in Keepsie’s way, pointing at the sky.
Despite herself, Keepsie looked up. She’d heard of the Academy’s newest hero, but hadn’t seen him yet.
The sinister laugh of some villain and the deep voice of the hero rang out above the excited crowd. A loud crunch of breaking glass and bending metal sounded above them as someone was thrown through a building. Keepsie guiltily hoped it was one of those damn holier-than-thou superheroes from the Academy hitting a skyscraper.
She held up her hand to block the sun. “Another building to repair.”
Another crunch, and several people screamed. Keepsie stumbled as people slammed into her, desperate to get out of the way.
Keepsie had been watching to see if the hero would get out of the building. She grunted in alarm when a massive object ran into her. Her breath whooshed out and instead of falling underneath whatever had hit her, she was airborne, wedged painfully in a strong grip. She winced when she realized she was now five feet from one of the more prominent super-villains.
Up close, her abductor’s commanding presence was even more frightening than on television; he was seven feet tall, bald, and handsome in a Harley-Davidson riding kind of way. He had a monocle implanted where his right eye should have been, and circuitry glowed under his skin around his neck and jaw line. She had seen pictures, but had never seen him up close: Doodad, Master of Machines. Although he looked as if he could punch out an elephant, she had never heard of Doodad participating in a physical fight. His power was in his brain, and his skill to bend machines to his will.
Doodad’s flying crab machine had plucked Keepsie painfully from the sidewalk. When the news had shown pictures of the machine, Keepsie had giggled, reminded of the Jetsons’ little hover car. Now, flying above Seventh City wedged in its one claw, it didn’t seem so cute. Although the claw pinched her bruised ribs, she clung to it and forced herself not to look down. It wasn't as if she could fly.
On the whole, the villains didn't scare Keepsie, but heights terrified her.
Doodad wouldn’t drop her; he wasn’t into blind terrorist acts like dropping innocents to watch them splatter. He always had a reason for his actions unlike some of the more homicidal villains like Seismic Stan. The wind pulled tears from her eyes and she gulped. At least, he’d always had reasons for his actions in the past.
Keepsie screwed her eyes shut as they gained altitude. Where the hell were the heroes that he’d been fighting? Her stomach turned at the unfamiliar wish for a hero. Or maybe that was the altitude.
Almost as an answer to her question, a booming voice said, “Put her down!”
And then he came; his glorious blonde hair perfectly styled and unruffled by the wind. He had apparently had time to restyle after freeing himself from the building Doodad had thrown him into. The hero filled out a black leotard and tights, his costume completed with a black cape fashioned with white lightning bolts covering it. A black mask covered his eyes, but allowed his blonde hair and chiseled jaw to show in true superhero glory. This must be the rookie, White Lightning. He flew, tall and proud over the rooftops, straight for Keepsie and Doodad.
Keepsie gritted her teeth. Be careful what you wish for. Why did it have to be the rookie? She could have stomached being rescued by the veteran heroine, Pallas.
"Let her go, Doodad! You'll get nothing this way!" White Lightning said, his booming voice hurting Keepsie's ears.
"Tell them at the Academy, tell her, that if you want to see this woman alive, you'll send me Timson by midnight!" Doodad shouted back.
Midnight? Who would open the bar?
"You'd never drop her, you have too much to lose!" shouted the newcomer. He hovered about thirty feet from the flying crab machine.
Keepsie’s feet kicked in the breeze and she was thankful she'd worn boots today.
"Lose, what do I have to lose? Family? Job? People that I love? I had none of those to begin with," Doodad said.
The hero scowled at him, and something caught Keepsie's eye over the skyline. A news helicopter buzzed toward them, camera pointing right at Keepsie and her captor.
"Shit," she said.
"We don't negotiate with villains!" White Lightning said.
Good. Go for the textbook response. That’ll convince him. This guy was an idiot. Was every other hero busy at the moment?
As the shouting match continued, a low whirring sound caught Keepsie’s attention. The claw gripped her somewhat tighter, and she squirmed.
The hero raised his hands to the cloudless October sky and Keepsie realized too late what was about to happen. The lightning bolt snaked down and slammed into the machine, filling Keepsie’s nostrils with ozone and eyes with blinding light. A millisecond later came the deafening crack and Doodad’s machine faltered in midair.
The rubber-padded claw squeezed tighter and tighter, causing Keepsie to cry out in pain and struggle against it, despite their altitude. Then it opened.
She fell.
Chapter 2

Keepsie had always hoped that she would be heroic in a situation such as this, but her hopes that she would at least act dignified died when she screamed and didn’t stop. She screwed her eyes shut as her stomach dropped away from her. In the abject terror that flooded her body, she still wondered in a moment of clarity whether her will was in order.
She stopped falling with a jolt, and a loud cheer rose from the street.
Shamefully she clutched the hero’s heavily muscled arms, but her fingers slipped over the spandex. They flew higher, to Keepsie's dismay, and circled the Jameson building, the tallest building in the city.
"Please let me down," she said, but the wind whisked her words away.
White Lightning waved at the news helicopter. Keepsie hoped it wouldn’t see her. She clutched the hero’s one arm and shuddered. Her mouth filled with nauseated bile. She hadn’t been this close to a hero since she’d applied at the Academy ten years ago. She had never been in a damsel-in-distress situation before. She didn’t think she liked it.
The hero turned toward the street and they finally started their descent.
This couldn’t be over fast enough. He finally deposited her lightly on the sidewalk, and she looked up at her disgustingly glorious savior.
“Thank you,” she managed to say.
A frown creased his blemish-free forehead. “Are you all right, miss? Did he hurt you?”
She shook her head and brushed her messy brown hair from her face.
“I’m fine. You’re new, aren’t you?”
“White Lightning, Seventh City’s newest hero.” He smiled widely, reminding Keepsie of the high school quarterback who tried to get her into the backseat of his car.
“Flight and lightning control. Neat. No wonder they’re happy to have you,” she said.
He beamed. “I would like to hope so.”
An awkward pause hung in the air between them, Keepsie realizing too late that he was hoping for another thanks. The crowd pushed closer, eager to touch his cape, get a picture, anything.
“Well, thanks again, and-“ "You're welcome, ma'am," he said, speaking loudly for the benefit of the crowd. "Incidentally," he added, "what's your name?" “Keepsie."
"That’s an interesting name. Is it Indian?”
Keepsie fought the desire to look pointedly at her very white skin. “Uh, no, it was a nickname given to me when I got my power when I was fourteen.
I’m Third Wave.”
His eyes narrowed. “Third Wave pseudonyms. Hero names are illegal, ma’am. Only registered heroes may have them,” he whispered, and leaped into the air, flying toward Doodad’s retreating vehicle, which was floundering through the sky and belching black smoke.
People cheered and waved at White Lightning, some women screaming that they loved him. Keepsie’s adrenaline left her. She was cold with shame and anger. The news crew would be here soon; she pushed her way through the crowd and actually snarled when a starry-eyed woman asked her what White Lightning was really like.
The short walk to the bar failed to calm her down. "’Hero names are illegal,'" she said, imitating White Lightning's deep voice. "Fuck you." Her voice sounded muffled to her own ears. She hoped the hero hadn’t damaged her hearing.
Keepsie thrust her hands into her jacket pockets and sped up, hoping her deliveryman would wait on her. Her breath caught in her throat when her hand closed around an unfamiliar object.
It was a heavy metal sphere, about the size of a golf ball. Realizing that Doodad had slipped it into her pocket, she stuffed it back. She’d examine it later.
Her legs still shook with reaction as she approached the delivery truck waiting outside the stairs to her basement bar. Carl stood at the bottom of the stairs and peered through the window.
"Sorry I'm late, Carl," Keepsie called down to him.
He looked up and waved at her. "Oh don't worry nothing about it, I just got here myself 'cause traffic wasn't moving hardly at all," He climbed the stairs. "I think it was another one of those hero battles slowed things down." He handed her the clipboard and slid the door up on his truck.
“Yeah, I know. I got caught up in it myself. I had to get…" she made herself to say the word, "rescued." She scanned the purchase order and didn't look at Carl.