Laid Out and Candle Lit 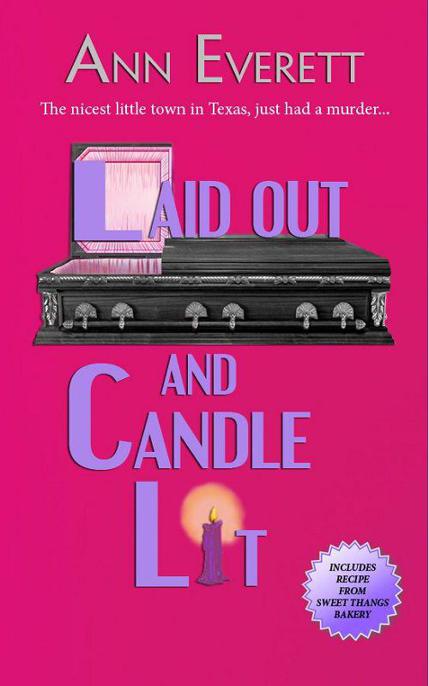 Laid Out And Candle Lit

This is a work of fiction. Names, characters, places and incidents are products of the author’s imagination or are used fictitiously. Any resemblance to actual events, locales, persons is entirely coincidental. No part of this book may be reproduced in any form or by any means, electronic or mechanical, including photocopying, recording or by any information storage and retrieval systems, without the written permission of the copyright owner or the publisher.

THIS BOOK IS FOR MY HUSBAND,TOM,

WHO LETS ME WRITE WITHOUT COMPLAINING . . . MUCH.

The creation of this novel could not have been possible without the required assistance of so many. My heartfelt thanks goes out to the following individuals, as well as those who have not been named, but have made this publication possible.

First and foremost, to my husband, Tom, who lets me write without complaining. As well as to my friends and family, who have supported me with love along the way.

A special thanks to Nancy Demarco, for suggesting I submit my manuscript to Briona Glen Publishing, LLC. To Brandy Fisher for the photo. And to Dr. D. P. Lyle, for answering the various medical questions I’ve had during this process.

And to my publisher, of course, the hardworking crew at Briona Glen (
www.brionaglen.com
) for their support and unwavering dedication: Tammy Andrew, Jason Reilly, Dana Blythe and Wil Birch. And of course, Pamela Marin-Kingsley for her work creating the best cover and book design imaginable.

To the ladies of Sweet Thangs, Pattiecake and Sugarpie for letting me include the Chocolate Coconut Pecan Pie recipe.

Last, but certainly not least, to you the reader for taking the time to discover my novel. The characters, Tizzy, Ridge, Sugarpie and Pattiecake, have populated my imagination for many years. I hope they will become part of your life, too, filling you with giggles and suspense.

N
ot only did Tizzy Donovan think her cup was always half empty, she was pretty sure someone had spit in it.

The last leg of her daily jog took her through Jenkins Cemetery. She stopped and breathed in the scent of freshly mowed grass and the musk of fertile earth. It was spring, and she should have a bounce in her step. But the approaching anniversary of Boone’s death pushed any sense of renewal away. To become a widow and single mother before the age of twenty-five had certainly not been in her plans.

She closed her eyes and willed the notions away. Many believed her ritual morbid. But to her, it remained a chance to start the day among people she loved most in her life. She didn’t consider the departed as eerie or macabre. She thought of them as peaceful. All the pain, suffering, disappointment, grief and demands of living were over. Granted, so was the
earthly
joy, but she believed the afterlife held much greater happiness. That is, unless you ended up in hell.

She inhaled sharply, feeling strangely alive among those who were no longer of this world. Her muscles eased as she reverently moved past the headstones.

Even though many of the dead had spoken to her for years, not one had ever
appeared
to her. But this morning something caught her eye. Something different. At first, she thought the early spring haze created an illusion. But, as she blinked and looked again, she spotted someone kneeling at the foot of Boone’s grave,
praying
. Apparition or not, she got a full blown, head-to-toe case of the heebie-jeebies, every hair on her body standing at attention. She rubbed her arms and tried to smooth them back in place. She closed her eyes.
Okay. I’ll count to ten, and they’ll be gone . . . Nine . . . ten.
She opened one eye, then shut it. Damn!

“Hello? Can I help you?” Tizzy asked, her voice trembling.

She moved closer. Her brain scrambled to make sense of what she saw. With each step her heart pumped faster and her knees grew weaker. The figure was not so much kneeling as it was slumped, and not so much praying as staged, its head resting limp against its chest and its lifeless arms spread wide. Tizzy’s scream came out as a weak yelp.

She staggered and struggled to keep her balance. Her breath coming faster, she leaned forward, hugged her belly tight with both hands. She tried to stop the bile from rising, but too late. She retched and fell against a tree, her body slipping downward until she rested on the ground. She gasped, wiped her lips, reached inside her bra and pulled out her cell phone quickly punching in the numbers. “Hello, Dan? Dan, there’s a dead body in the cemetery!”

Her brother laughed. “Ha-ha, very funny, Tizzy. I get it. April Fools!”

“Dan, I’m not kidding. There really is a dead body in the cemetery, and I think it’s Marlene.”

Within an hour, the graveyard became the liveliest place in town, cordoned off with yellow crime tape strung from tree to tree. County Sheriff Dan McAlister and Police Chief Earl Dean Ramsey were on the scene. They waited patiently for over an hour until the Dallas forensic team arrived, headed by Dr. Jack Terrell.

Terrell approached Dan, shaking his head. “This is a hell of a mess. Given the thunderstorm last night, I don’t think we’re gonna get much physical evidence. The rain more than likely washed everything away.”

Standing outside the crime area, Dan turned his head and spit, then resumed his chew of tobacco. “Do you have any idea about Cause of Death?”

Dr. Terrell, three months from retirement, looked thin and pale. He pushed his glasses up on his nose. “No apparent sign. No blood. No wounds. No sign of strangulation. We won’t know until after the autopsy, and that’s gonna take a while. According to body temp and rigor, I can tell you she died between nine last night and two this morning.”

“Well, given the location of the body and the time of death, I’d say the circumstances are suspicious enough to treat it as a homicide, unless your autopsy proves different. I’ll call the Dallas office and get a Ranger assigned to the case.”

“Has anybody notified the family?” Dr. Terrell wanted to know.

He‘d no sooner got the words out of his mouth when the dispatcher who had radioed Carl’s report of Marlene called through.

Ramsey turned to face Dan. “Well, I guess that answers that. You wanna go with me? We can take his statement.”

A
s Ridge Cooper drove into Brownsboro, he chuckled.
Welcome to Podunk.
What a place to investigate his first solo case. He wasn’t fooling himself. He understood this was his Judgment Day. If he screwed up, he probably wouldn’t last much longer as a Texas Ranger, for no love was lost between him and Captain Reynolds. The Captain didn’t understand why a boy from Philadelphia would come all the way to Texas to be a Ranger. Eight years with the Philly Police Department and twenty-eight months with the Texas Department of Public Safety didn’t carry any weight with the Captain. No matter how impressive his case record and investigative skills, Ridge needed to prove himself all over again, this time as a Ranger. So he’d done his homework concerning Brownsboro.

The little burg located about a hundred and twenty miles east of Dallas was the oldest town in Henderson County. Nestled among tall pines, the total area for the city consisted of only two square miles. A typical Texas rural community, where folks nodded and waved to everyone. Everybody knew their neighbors by name and thought nothing of borrowing a cup of sugar. There hadn’t been a murder in Brownsboro in fifty years.

He slowed his car to a crawl and took everything in. One main street. One caution light. One red light. He drove past the post office, where old men out front were passing the time of day.

A little farther down, a large wreath of white lilies tied with a black bow hung on the door of First United Bank. The electronic sign flashed
Bank and Drive-thru open as usual.

The town was plain, dismal really, he thought as he passed Hometown Grocery and
City Wide Gazette
. He made a U-turn and surveyed the other side of the street. There was no glitz here, and except for McAlister’s Tavern, probably no nightlife either. He smiled.
This should be an open-and-shut case. The victim was bored to death.
He continued on, passed Clippity-Do-Da Hair Salon, Sweet Thangs Bakery, and finally the Police station/City Hall.

He angled into the station parking lot. The brick building was longer than it was
wide, had a side entrance and windows stretching across the front. He got out of the car and went inside. Chief Ramsey and Sheriff McAlister rose to greet him, extending their hands.

“You made record time,” Dan McAlister said. “We weren’t expecting you for two more hours. Like I told you on the phone, we don’t have any motels or hotels. But I’ve arranged for you to stay at Browning House. It’s fully furnished. I’ll take you to get settled, and then you can come back here and go over everything we know so far.”

Ridge followed Dan as he turned right, then left. It was a depressed area, where streets weren’t curbed and guttered. Most of the houses were old and in need of paint, repair, or both. Cars no longer serviceable littered some of the lawns. Long past the season, Christmas lights dangled from rooftops while unsupervised kids played in front yards.

They took a left onto Browning Street, and the atmosphere changed. Browning House, a restored home on the north end, didn’t look unoccupied. The lawn was manicured to perfection. The structure itself, a frame building, was painted cream with black shutters and green screen doors. An L-shaped porch guarded the front and one side. Between the curved post and above the railing, huge Boston ferns hung suspended by chains. Flowering shrubs with pale pink blooms outlined the veranda.

By the time Ridge parked behind the sheriff, got out of the car and grabbed his suitcase, Dan McAlister was unlocking one of the two front doors. Ridge followed Dan inside.

I Love You to Death by Natalie Ward
Lord Foxbridge Butts In by Manners, Robert
The History of Jazz by Ted Gioia
Sex Drive by Susan Lyons
Pir-E-Kamil: The Perfect Mentor by Umera Ahmed
City of Time by Eoin McNamee
The Last Girl by Stephan Collishaw
My Soul to Keep by Sharie Kohler
TRAPPED by ROSE, JACQUI
A Most Extraordinary Pursuit by Juliana Gray