Land of Dust and Bones: The Secret Apocalypse Book 7 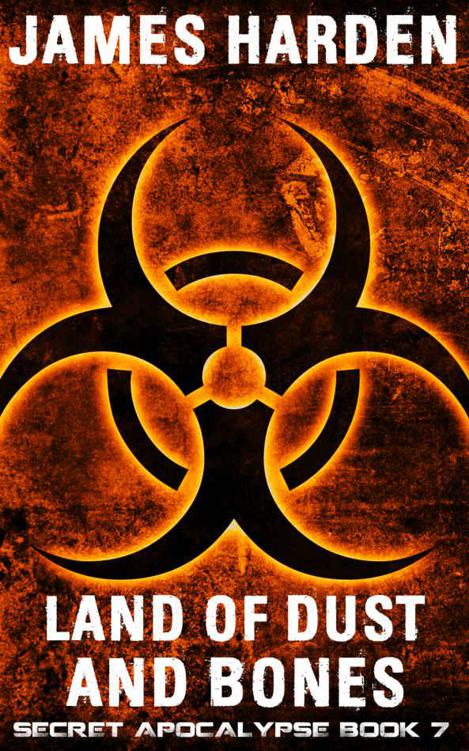 Land of Dust and Bones

Book 7 in the Secret Apocalypse Series

We are walking through a desert, a dead land. We have been walking for…

I’m not sure how long.

And I feel totally hopeless. Daniel has
just been executed. Executed, killed, murdered by his own people. The Company.
YoshidaCorp. And right now I want to give up. I want to lie down in the red
dust of the Australian outback.

And close my eyes.

And never open them again.

What’s the point? We’ve come as far as we could
possibly go. As far as anyone could ever have hoped to have survived.

This is an extinction level event.

We are not meant to survive this.

So there’s no shame in giving up at this
point, right?

If only it were that simple.

And I fall to my knees.

But as soon as I do, Kenji grabs my shirt
by the collar and picks me back up. He looks at me. He looks deep into my eyes
and for a second his cold exterior melts away, for a second, his armor is
stripped away. I see Kenji. The boy next door. The boy who saved me.

He whispers these words to me. And before I
can say anything, before I can throw my arms around him, his armor is back and
his cold exterior is back and he shuts out the world and everyone left in it.

I don’t know exactly what happened to Kenji
when he was taken, when he was abducted and tortured by the man in the gas
mask. I don’t think I’ll ever know. But if it’s anything like what that goddamn
psychopath put me through, if it’s anything like what he put Maria through,
then I know it was bad. I know it was worse than bad. I know Kenji has been to
the brink, to the very edge of his sanity. I know he has been close to death.

Kenji turns to the group. He has that cold
look in his eyes. He is determined. He wears his armor. It is invisible. It is
not completely impenetrable, but it is strong. It is resilient. He tells
everyone to gather around, to listen up.

Everyone slowly does what he says. Not
because he is the boss and he is ordering us to do it, but rather because we
all trust Kenji with our lives. And if I had to guess, I’d guess that no one
had any idea what to do now, of what to do next. Or how.

I don’t even know if we’ll have the
strength to get out of this desert.

So we all slowly gather around Kenji,
waiting and hoping for a plan of action. Waiting for Kenji to say something
that will miraculously make everything better.

Sarah has her hands on her head. And maybe
the only thing I do know for certain is that she’s our best chance to get out
of this desert. She might be our only ticket to safety.

There’s
a small town. About three or four days away. They built walls. They built them
early...

She keeps looking left and right. East and
west. North, south. She is trying to get her bearings. She better get them
quick because we need to get moving.

Kim is doubled over, hands on her knees.
Her face is a bloodied and bruised mess. She took an absolute beating at the
hands of the residential sector survivors of the Fortress. As a result, her
face is swollen, her eyes are swollen,
her
lips are
cracked and streaked with blood. I see her move her tongue around the inside of
her mouth, pressing against the inside of her cheek. She then spits out a
mouthful of blood.

I cannot blame them. I totally understand
this.

Jack and Maria are huddled together,
holding hands. They are looking at the horizon, staring at the horizon. The
thousand yard stare is what Daniel called it. Jack is limping forward, he is
struggling to stand on one leg. He was hit in his calf muscle with an arrow, a
crossbow bolt. The work of the Death Squad. I have no idea how he is going to
walk through the desert. Maybe we will have to carry him. Maybe we will have to
drag him.

I stand next to Kenji, a little bit behind
him. The sun is setting over our shoulders, slowly, lazily.

The others turn to us and raise their hands
to shield their eyes from the sun.

We must be silhouetted against the light.
We are shadows.

Kenji takes a deep breath. “Guys, I know
we’ve just been through hell. I know we all feel like shit, like giving up.
It’s hard… losing someone. Someone who did so much for us. Someone who saved
our lives time and time again. Daniel got us out of Sydney. And he tried his
best to get us out of this country, tried his best to get us to safety. We
probably wouldn’t have made it this far without him.”

Why is he dead? And why are we alive?

How the hell are we going to make it
without him?

Is our time running out?

We
are not meant to survive this.

The sun continues to set.

“But we can’t give up,” Kenji says. “I
won’t let any of you give up. We’re strong as a group. We’re all relying on
each other to make it through this. We are each other’s source of strength. And
trust me, we will need strength, because we are not out of danger yet.”

Yeah, I think to myself, we’re stuck in the
middle of the desert.

In the middle of a zombie apocalypse.

Sarah said there was a town, a safe haven,
but I’m struggling to believe it. How could there be any safe places left? What
makes this town so special?

Every other town and suburb and settlement
that we’ve come across has been overrun. Entire cities have fallen. The
Fortress, a secret underground military base that was designed for the end of
the world, for a situation just like this… has fallen.

“We know the company aren’t messing around,”
Kenji says. “Their orders have been shoot to kill from day one of this thing.
Same with the military. We know the infected are relentless. We know the
nano-swarms can come out of nowhere. We know they are deadly. And we know the
desert can kill quickly, easily. This is why we need to stick together. This is
why we need to be strong.”

Kenji talks about strength. About courage.
He talks about honor. “Giving up now would be doing Daniel a disservice,” he
says. “Because Daniel never gave up. Not once. He sacrificed himself for us. So
we need to honor him. We need to honor his memory and his sacrifice by not
giving up. By fighting. By surviving. I know we’ve been doing it for a long
time now, but we need to keep doing it. We need to keep fighting for our lives,
fighting for our freedom, our future.”

Kenji talks but no one makes eye contact
with him, everyone’s gaze is lowered. Everyone is staring at the dirt. Everyone
is silent.

My
sister is still there. I need to get back.

“You better not be lying,” Kim says.

“The town is real,” Sarah answers quickly.
“The walls are real. They kept out the infected. And they kept out the other
things. When my sister and I made it there, we were in bad shape. We had lost…
everything.”

And it is the only reason why I believe
her.

“When we found the town,” Sarah says,
pausing, thinking back. “We were on our last legs. We were completely out of
water. Completely out of food. We had no energy. When we walked, we weren’t
really walking. We were just falling forwards, stumbling.” She rubs her
forehead as she remembers how close she was to dying. “At first we didn’t know
what we were looking at. I’d never seen anything like it. Giant black walls,
towering over the rest of the town. Taller than most of the buildings. Taller than
the houses. The clock tower from the town hall and the church steeple were the
only things taller.”

I picture the town. I imagine the giant
black walls.

“For some reason, the walls gave us a
renewed strength,” Sarah continues. “We were drawn to it. I don’t know why. I
can’t explain it. We crept into the town. We snuck into the town. There were
infected everywhere. We should’ve stayed away. Every other town we had come
across had been overrun. Every other town was too dangerous to even go near.
But like I said, we were completely out of water, completely out of food. We
had no choice.”

We have all been in this situation. We all
know the temptation.

Is the reward, is water and food and
shelter worth risking your life?

Sarah shakes her head. “But it was more
than that. More than the prospect of finding water. We had to see it, we had to
know what those black walls were. We had to get there. We had to stand in their
shadows. We had to know what was behind them. I know it’s stupid, but in my
mind, in our minds, there was hope behind those walls. There was a safe place.
A paradise. A home. A future. The closer we got, the taller they got, the
bigger they seemed. The more powerful. We ran into some people from behind the
walls. They were on a scouting mission. They were checking the town for
supplies, checking to see if they could reclaim any more of the town. I guess
they took pity on us. We would’ve looked so pathetic. Anyway, they let us in.
We were saved.”

And I want to be saved.

I want to be rescued.

I want to be taken to a place far away…

“My sister is still there,” Sarah says. “I
should never have left her.” She points to the ground, to the red dirt. “What I
did down there, in the Fortress, I did to survive. I lied. I cheated. I stole.
I killed. I did these things because I was forced to do them. I had no other
choice.”

And we have no choice. It is time to go.

“So, which way?” Kenji asks. “Are we
heading in the right direction?”

Sarah looks toward the horizon. “I don’t
know,” she answers, whispers, still trying to get her bearings. “It’s south
from here.”

Up until this point, we had once again been
following tank tracks and tire tracks. We were hoping they would lead to a
road. But at the moment, we couldn’t see any roads, or fences. There were no
signposts and no signs of civilization.

Kenji points to the sun over his shoulder.
“That’s west. That’s south.”

Sarah nods. “If we head south, we’ll
eventually hit a road. Or a boundary fence. Something we can follow. Something
we can use to get our bearings with.”

So we move away from the tank tracks. We
head south.

We are hoping to find a road soon. Or a
fence.

And hope is all we have.